Square in Malinska, Island of Krk

Malinska, as well as a number of places scattered along the Adriatic coast, is marked by a special kind of duality. The character of the place seasonally changes in succession; it is busy in the summer, noisy and overcrowded, and in the winter, it is introverted and silent. These two faces are permanently embedded in its image. The goal of this development project is to balance these oscillations and enable Malinska to live with the same intensity and pace throughout the year through the creation of basic infrastructure.
The basis for sustainable development of the site is the reprogramming of its contents and the characteristic shaping of individual areas of the scope. The goal is to form a dynamic urban circuit, capable of hosting a lively fishermen’s night in the heat of the tourist season, as well as a pleasant evening walk to the sound of the waves in the setting sun. The shaping of the coast was carried out in two ways. Through its modern design it meets the fast-growing needs of tourism, and by reinterpreting the elements embedded in the memory of the locals it preserves a historic spatial ambience.
The first realized part of this comprehensive solution is a new public square, of approximate size of 1500 m2. Apart from the basic idea that has already been set out in the competition, all interested Malinska residents have played an active part in the final design of the new public space, through a series of public presentations and open discussions. It was precisely this participatory process, which contributed to the quality of programming of the new public space. A small and neglected park got a fresh look. Part of the green area was turned into a funnel-shaped square connecting to the rest of the waterfront and paved with the same white stone from Istria. The square is bordered by a green belt, which creates a backdrop for events taking place on the square, but also provides the necessary shade for hot summer days. The altitude difference present in the space was overcome with three stairs gradually rising from the ground and outlining the contour of the square while simultaneously focusing it on the waterfront.
The concrete stairs are engraved with verses dedicated to the sea, carefully selected through a dialogue between the old and the young citizens of Malinska. It should be emphasized that the participation of the local community did not stop just on the ideas, but continued on the realization itself (see image, Nikola Jurić, a Malinska resident, is hatching the letters of engraved verses). The square functions as an extension of the town waterfront, and can also serve for smaller, more intimate, off-season events.

What makes this project one-of-a-kind?
NFO Architectural Office was awarded first prize at the public architectural and urbanistic competition for the development of the coastal area of the settlement of Malinska on the island of Krk in 2015. The aim of the competition was to create a clear vision for the development of the coastal belt of Malinska area of about 53 000 m2, which include very heterogeneous zones ranging from the reconstruction of the town harbour, waterfront, squares and beaches. This square is the first phase of a much larger picture. 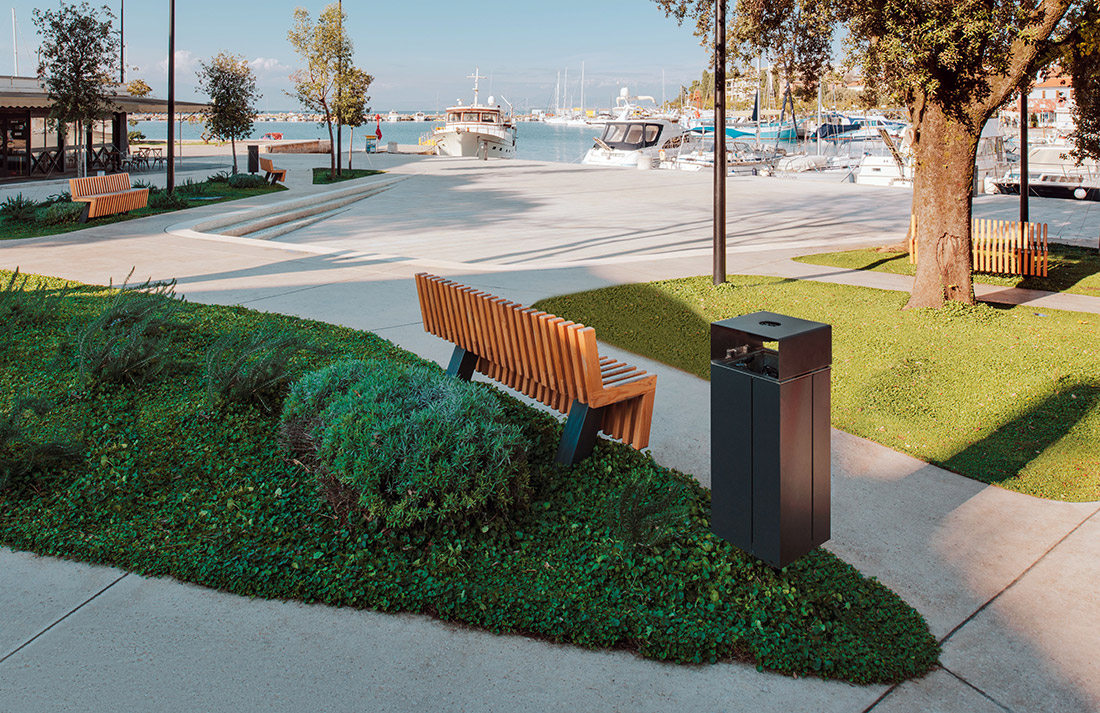 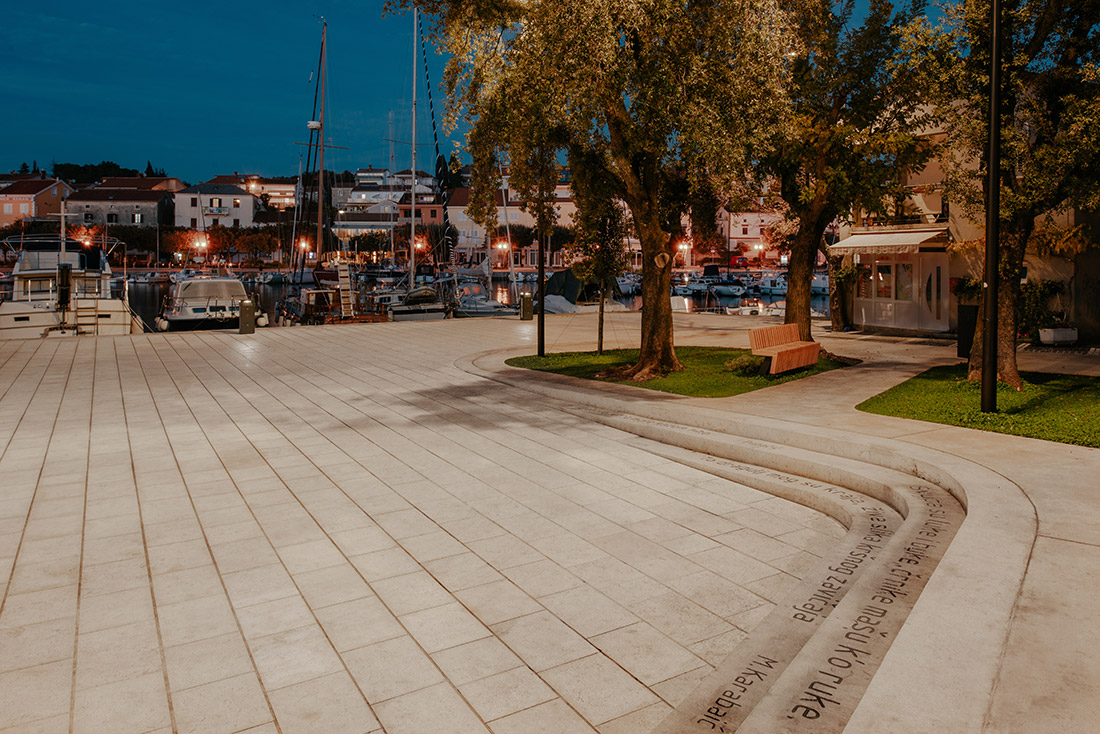 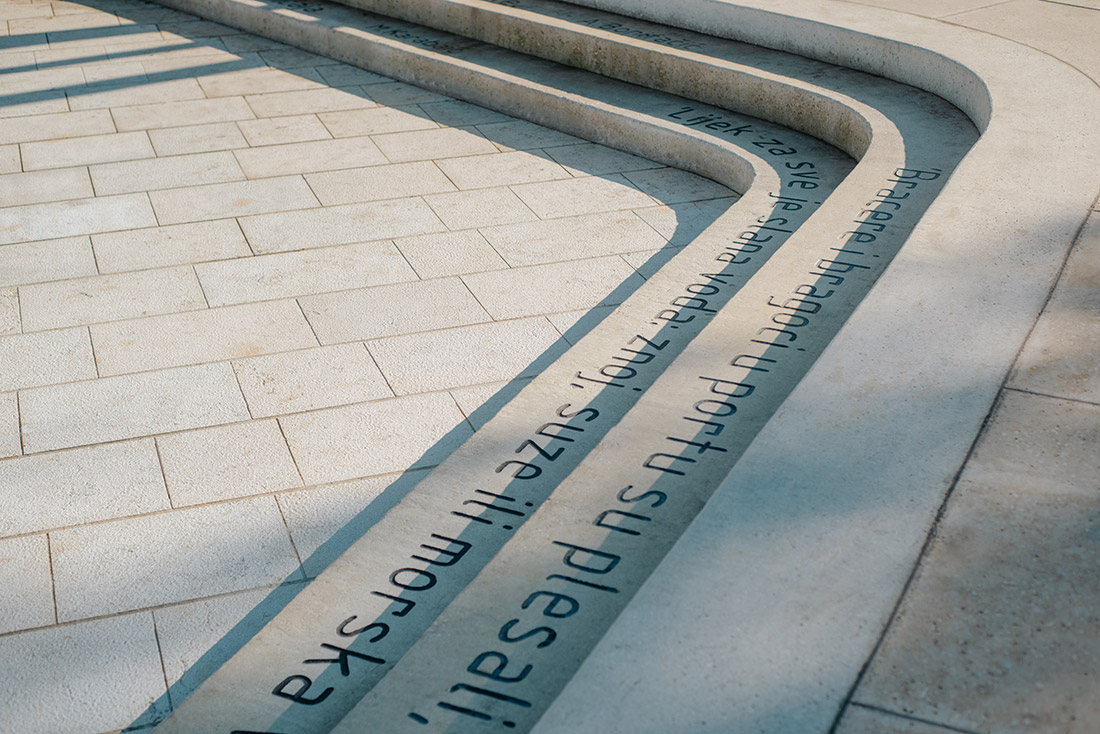 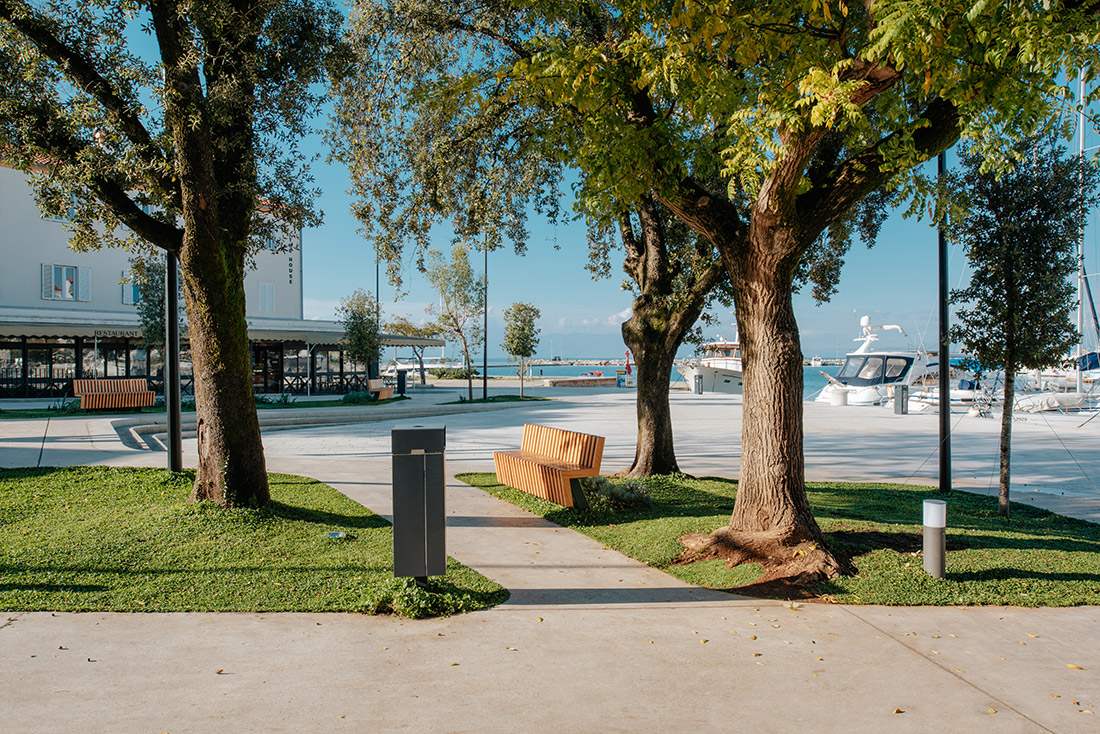 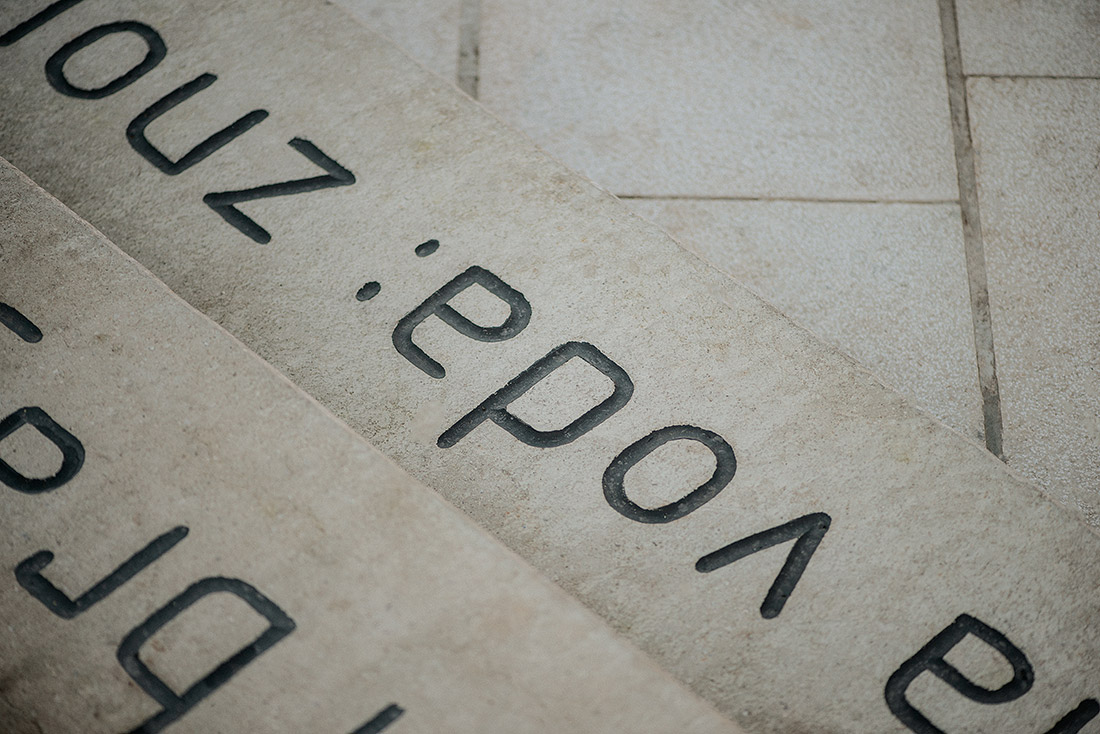 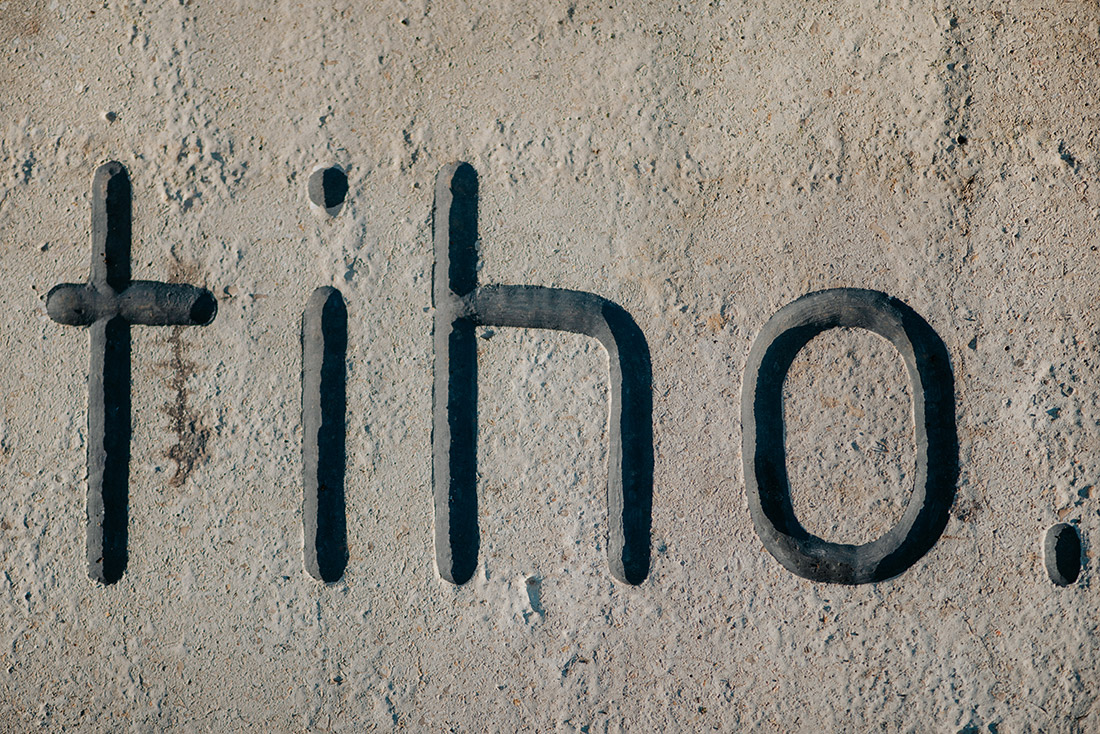 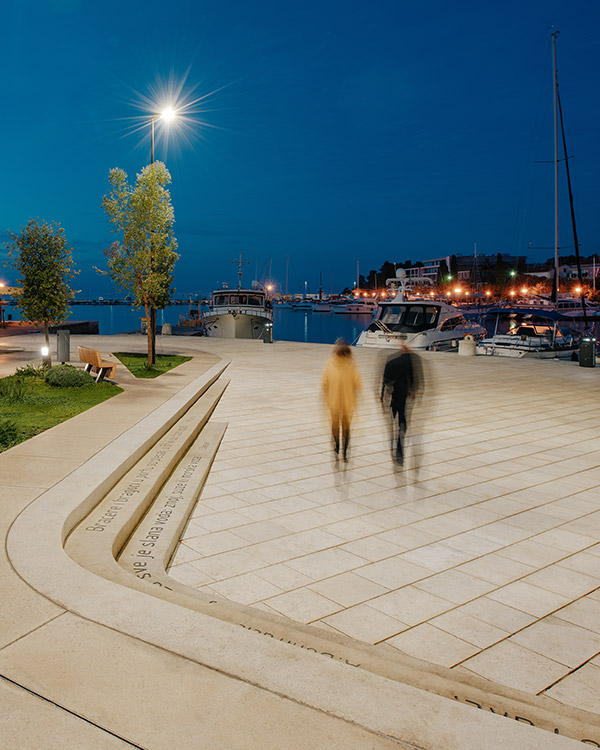 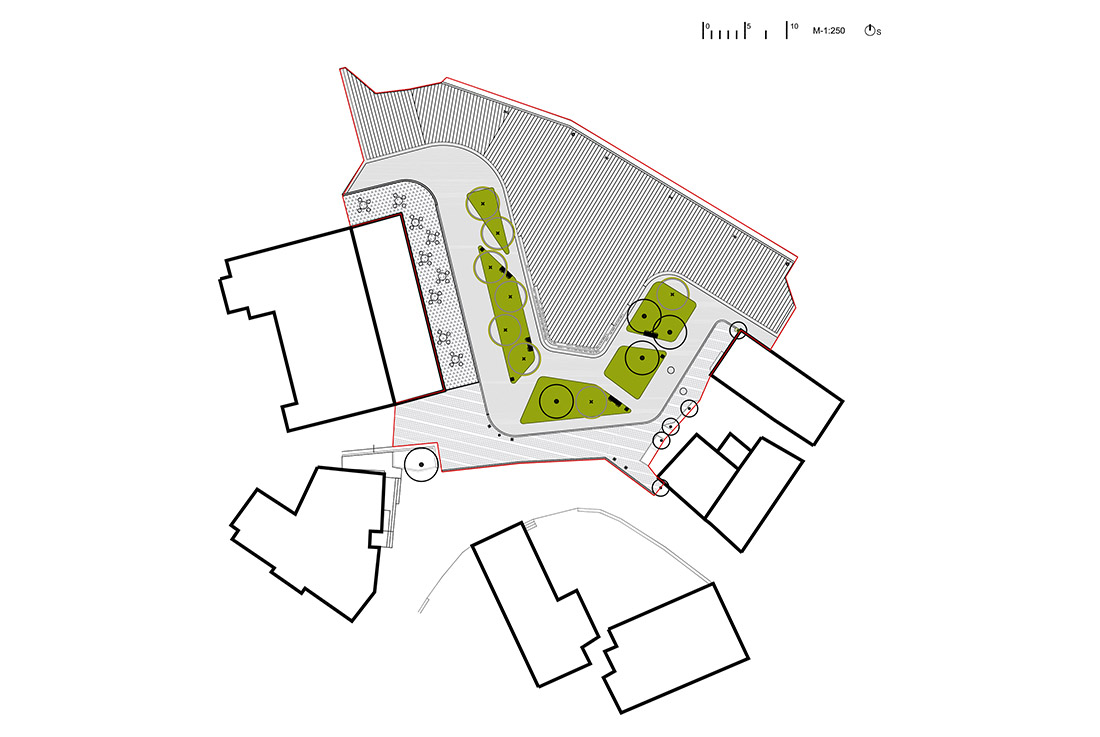