Termalija Family Wellness is the latest in the series of projects which we have built at Terme Olimia in the last fifteen years and concludes the complete transformation of the complex from a classic health centre built in the 1980s to a modern relaxing thermal spa. The transformation has been characterised by its gradual nature – each step was carried out in response to the then-current needs and did not follow any preconceived development plan. In fact, every new building was believed both by the investor and by ourselves to be the last.

The usual development of such complexes results in a series of extensions that slowly fill the space and do not conceal their origin in terms of either the period or the design. We took a rather different approach in the renovation of Terme Olimia, and with each new building, we tried to improve the situation also in terms of the urbanism. At the same time, we invested a lot of effort into designing the buildings in such a way that despite the new programme added each time, the buildings do not actually fill the space but connect it even more with the nature that surrounds them.

The same applies to the Termalija Family Wellness. The new facility is located at the site of the former wintertime covering of the outdoor pool. The cover was supposed to be retracted every summer to free up the scarce outdoor space, but in practice, this was never done because of the complexity of the retraction process. With its size and form, the membrane covering of the outdoor water surfaces stood out considerably from the surrounding built structure.

While the previous projects were the result of the wishes of the investor, this one was actually proposed by us. The existing winter covering was a definite detriment to the guests’ experience of this otherwise very naturally designed complex. But this was not the sole reason: in its programme and design, the old part featuring thermal content stood in stark contrast to the new one, giving rise to mounting complaints from guests who wanted the service to be on an equal level. This persuaded the investor to go ahead with this last step of the transformation of the entire complex.

Previously, a greater portion of the building was cut-and-filled under the surrounding terrain with each subsequent project, which reduced their presence on the site. In the case of the Termalija Family Wellness, however, we weren’t able to simply repeat this design approach. The volume of the necessary space, especially in the area with water surfaces, required the siting of a much larger structure which could not simply be buried below the grade. No longer being able to reference only the surrounding natural landscape, the solution was found in the scale and form of the surrounding vernacular structures.

While we were still able to design Termalija’s supporting programme in the same way as we had previously done Orhidelija, the large roof above the water area was divided into sets of smaller segments to prevent its scale from overwhelming the surroundings. Viewed from a distance, the shape, colour, and scale of new clustered structure of tetrahedral volumes is a continuation of the cluster of the surrounding rural buildings, which simply visually extends into the heart of the complex.

The resulting fine structure of volumes has enabled us to solve another important task. The seemingly complex geometry gives the new roof static strength, allowing the entire pool space to be covered virtually without supports. In this way, the new roof floats above the pool platform, which is designed as an exterior space. Due to the lack of outdoor spaces in the summer, it was imperative to examine solutions which would deliver the same closed space used by the guests in winter as an open space in summer. Numerous skylights in the roof, together with the ability to fully open all the facade glass surfaces, enable the guests to seamlessly pass through the interior of the building. Despite its size and the space it occupies, the new roof simply acts as a big summertime sunshade and does not usurp any of the precious exterior space. 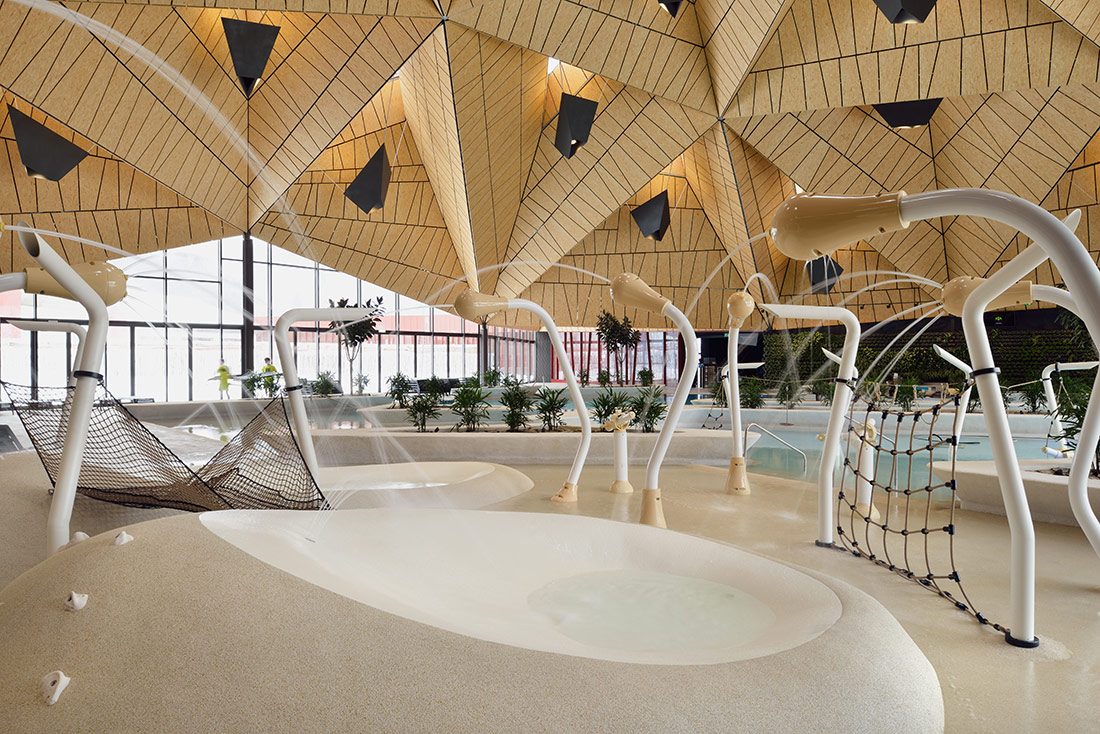 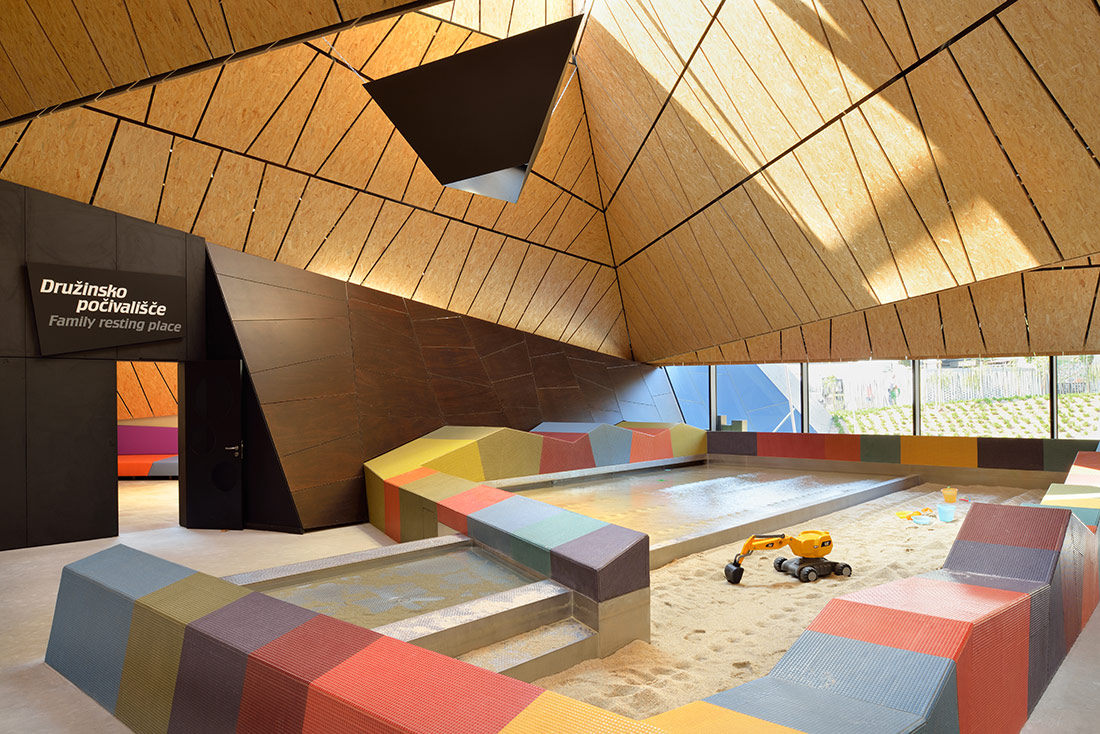 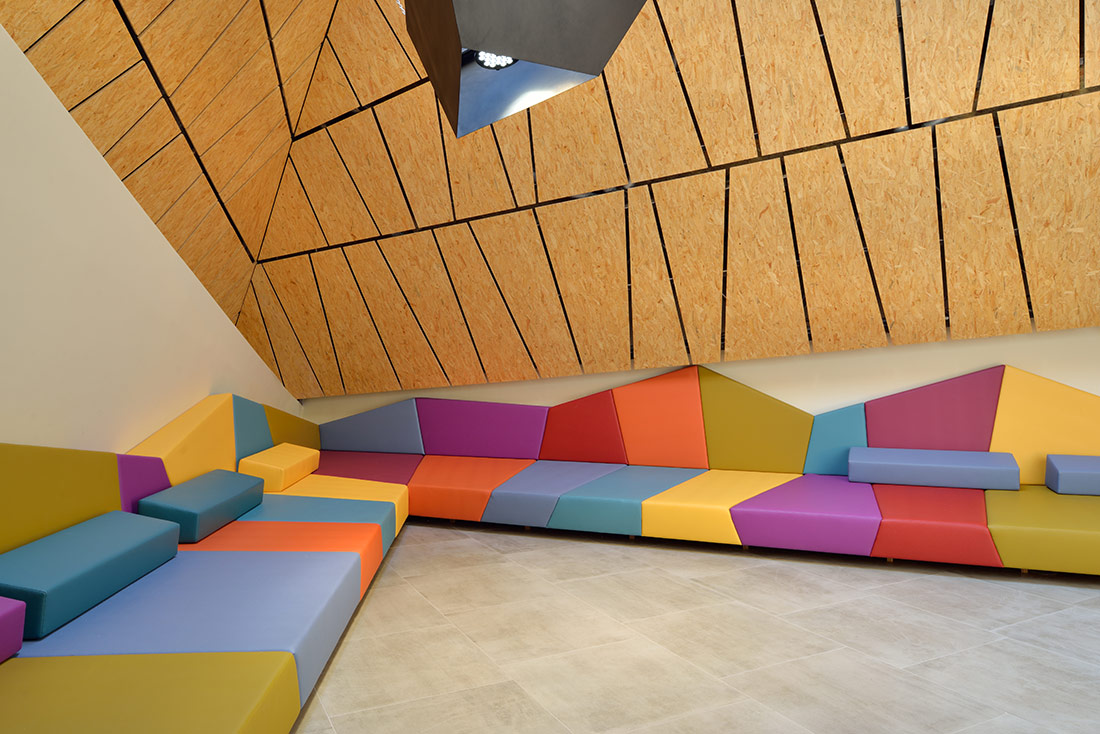 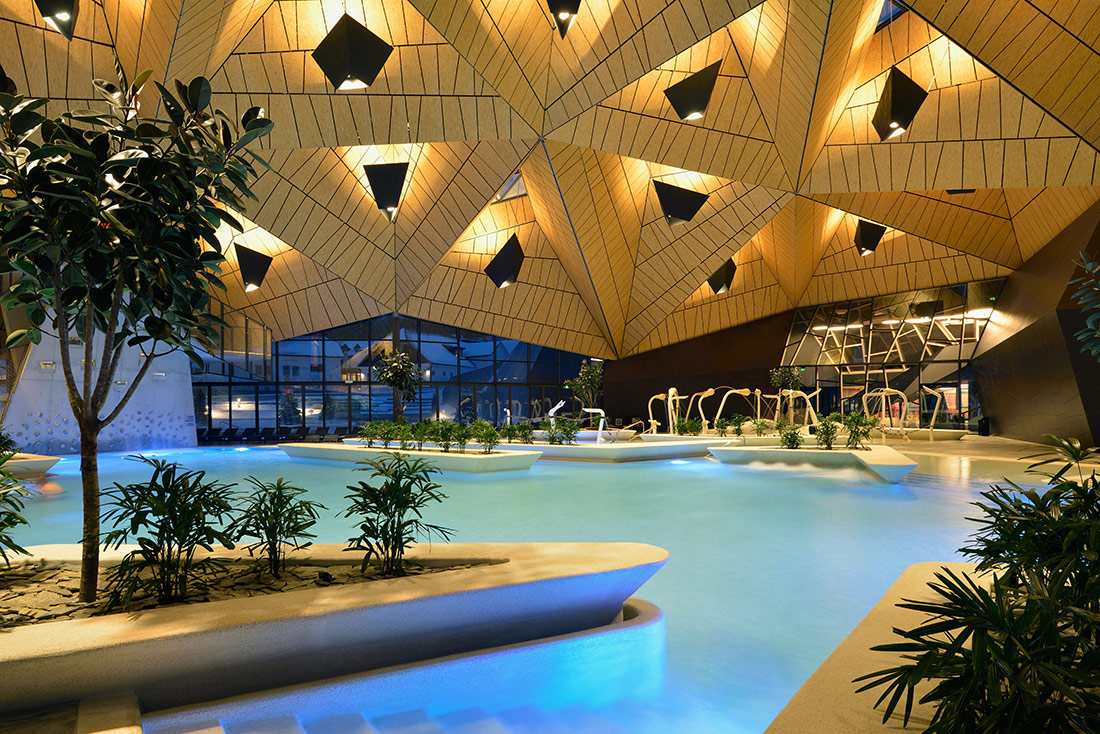 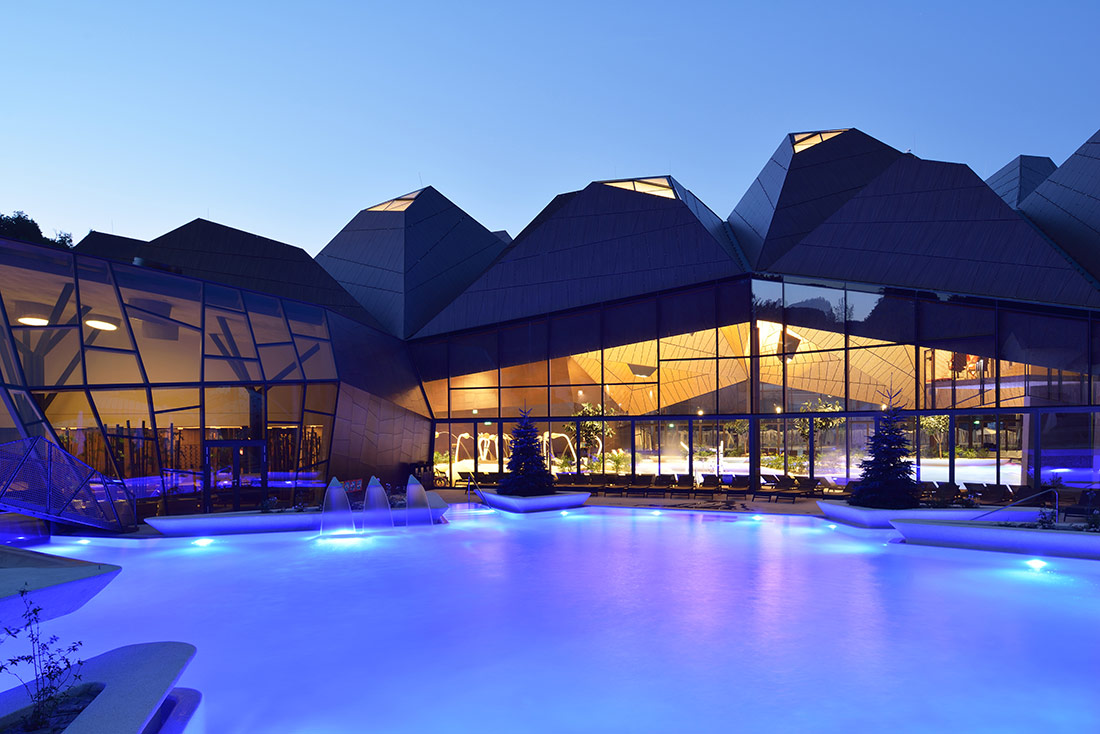 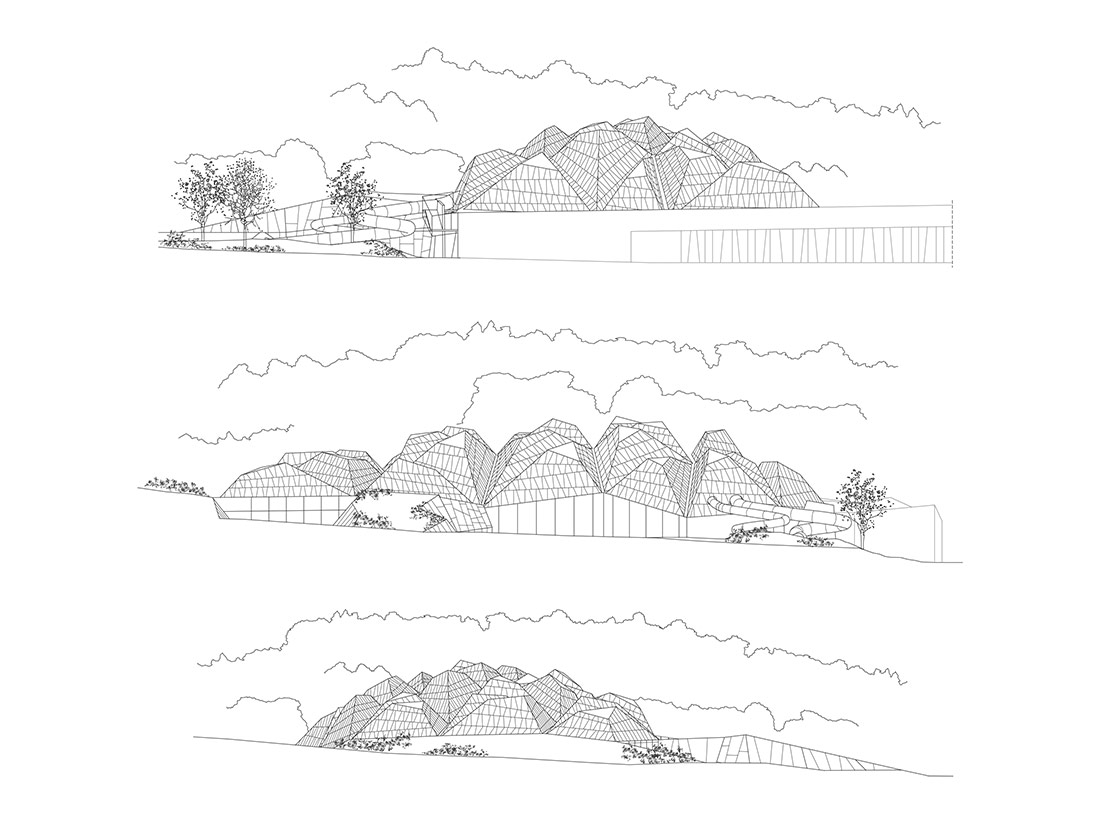 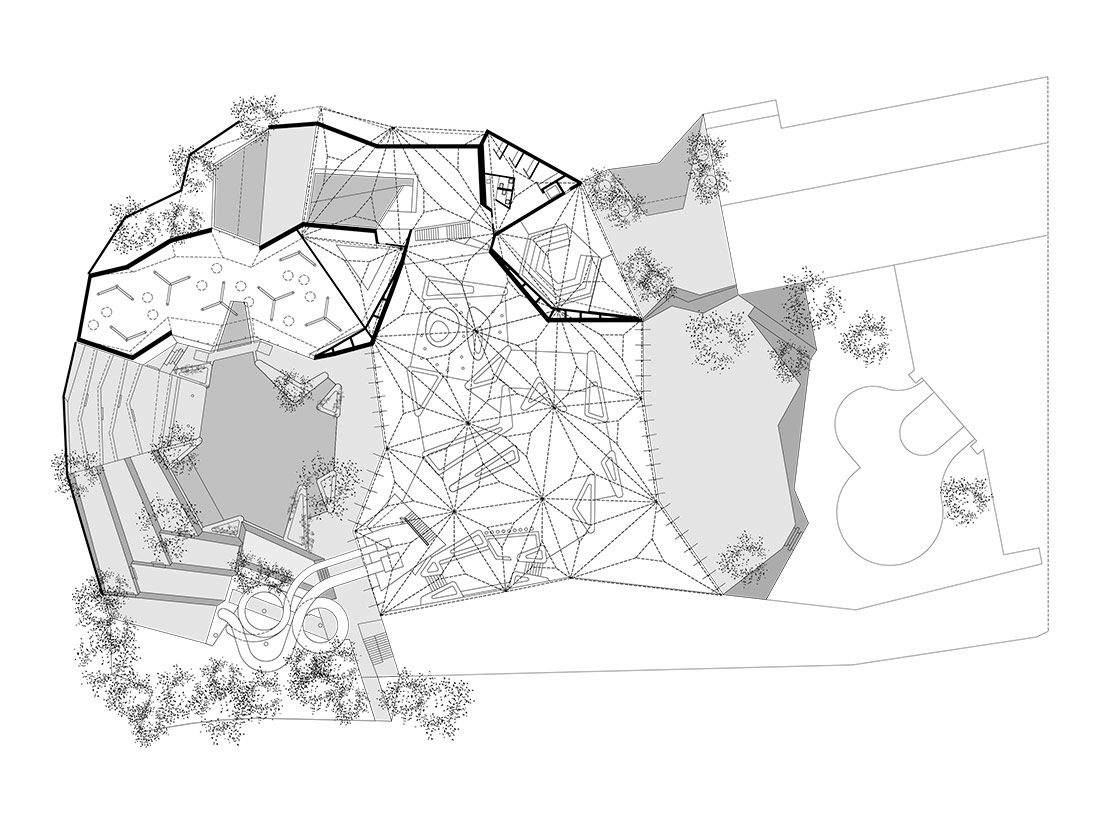