The location of the hotel is located in the center of Bovec, which is the tourist center of Bovško and the Soča valley. It is surrounded by the Alps and the rivers Soča and Koritnica. Svinjak rises above the valley, giving Bovec a recognizable panoramic image. Investor Soča rafting are beginners in offering rafting, canyoning and zipline in Posočje. The hotel is a supplement to their activity, as they wanted to offer their customers accommodation as well. Attractive views of the surroundings as well as the shape of the plot determine the shape of the hotel. Two volumes of elongated rectangular shapes are envisioned, where one is placed parallel to the western border of the plot, and the other parallel to the eastern border of the plot. At the junction of the two volumes, a larger open space is formed, which is intended for a multi-height entrance hall. On the ground floor, there are spaces of a public and technical character, which are functionally located according to the directions of employees and guests walking paths. On the first and second floor, hotel rooms with a more modern interior design – an exposed shower and a sink, are located. There are 10 rooms on each floor, so the total number of rooms is 20. Each room also has its own balcony niche, which is oriented in such a way as to offer guests the most attractive views of the surrounding mountains as well as the most favourable orientation and also providing some intimacy. The common program for hotel guests is located on the attic floor. The program includes a small fitness area and a spa with service areas and an outdoor terrace. The building has a partial basement. The basement floor is primarily intended for storage and installations. The hotel is designed as a reinforced concrete wall structure with a gable roof with different slopes. The concept of supplying the facility with heating and cooling energy is designed to maximize consumption rationalization and the utilization of renewable energy sources for heating the facility. Heating and cooling energy is provided in the facility with two air/water heat pumps.
The ground floor of the building is represented as a dark-colored base on which both floors of hotel rooms are placed. The ground floor is covered with dark grey plaster with a very rough surface. The upper floors are enveloped with vertical wooden slats, the which are occasionally interrupted by triangular niches, which are done in dark-colored sheet metal. The wood is thermally treated and coated with a protective oil coating in shades of gray. This way, the façade will gray evenly over time. The façade is thus mainly characterized by the use of materials of a natural and warm character, such as wood, which also appears inside the balcony niches in its natural light brown shades. The mansard, or the roof of the two volumes, add dynamism to the shape of the building and abstractly illustrate the surrounding peaks. The roof is visible from all the surrounding mountains and gives the building an additional attractive facade.

What makes this project one-of-a-kind?
The appearance of the building is characterized by elegant shades of gray and large glass surfaces, which reflect the picturesque Alpine surroundings, from which the Svinjak peak stands out. The design of the hotel is connected to the neighboring Hotel Kanin, which is of special architectural importance, and at the same time coexists with the surrounding buildings of the settlement. 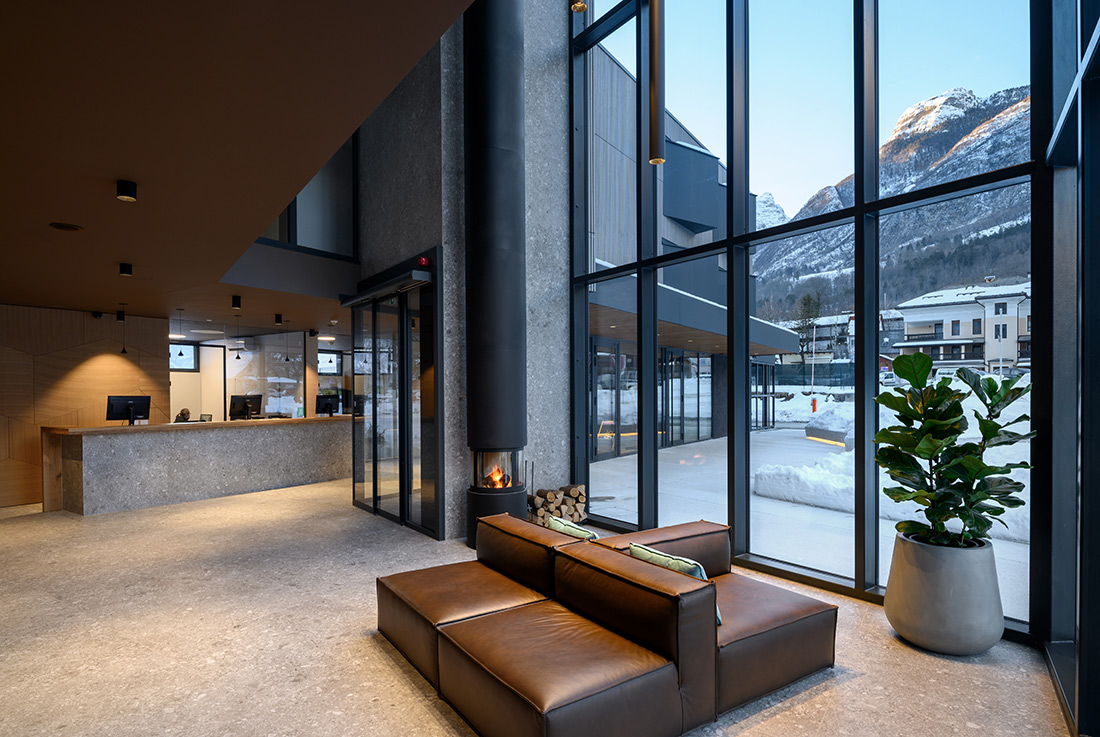 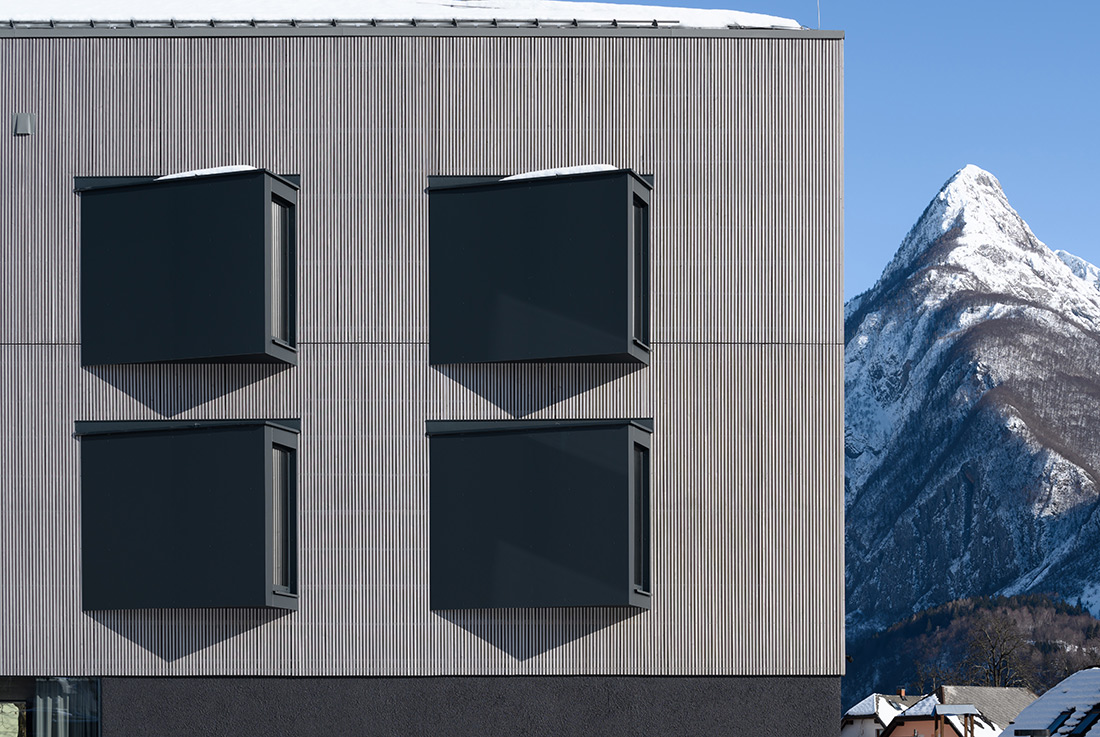 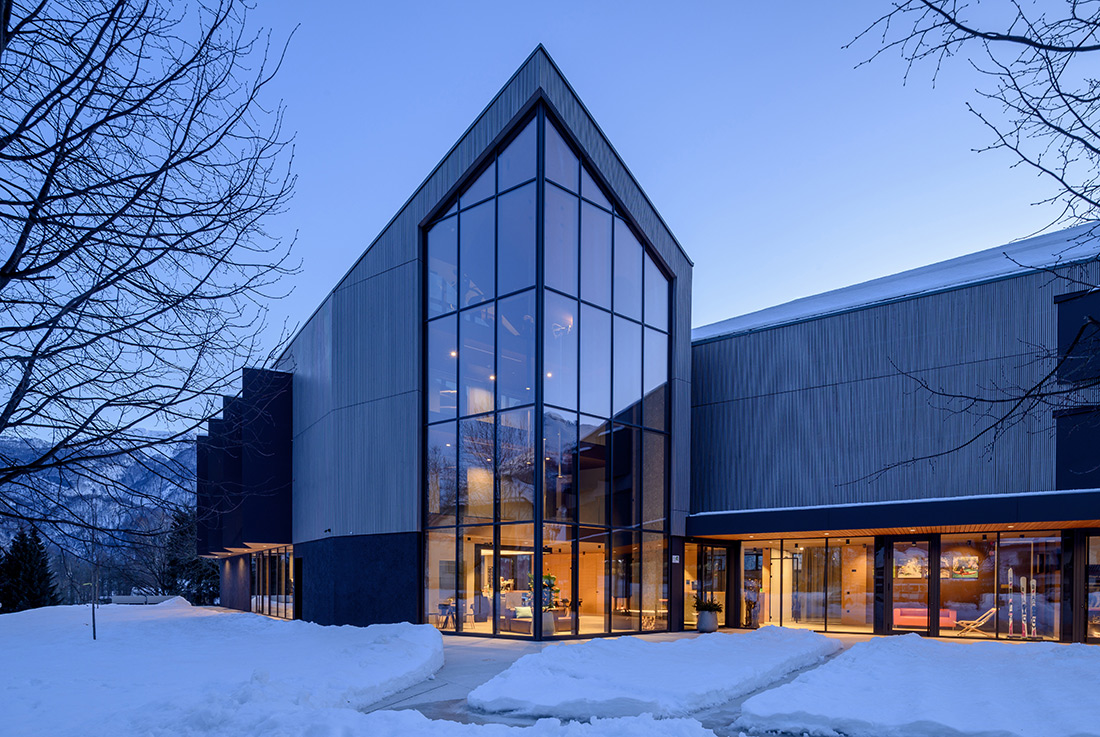