“Pier One” is developed through the impressive metallic volume of a building which is located in an advantageous location. It has a180° view towards the waterfront of Limassol. The old and new piers, the endless sea, the old port and the new marina unfold in front of the visitor’s eyes. All the above elements of the surrounding area have been sources of inspiration during the design process. Moreover, the fact that the metropolitan areas of Limassol and Larnaca are natural reserves for various species of birds and especially flamingos has been a major factor for the design concept of the project. 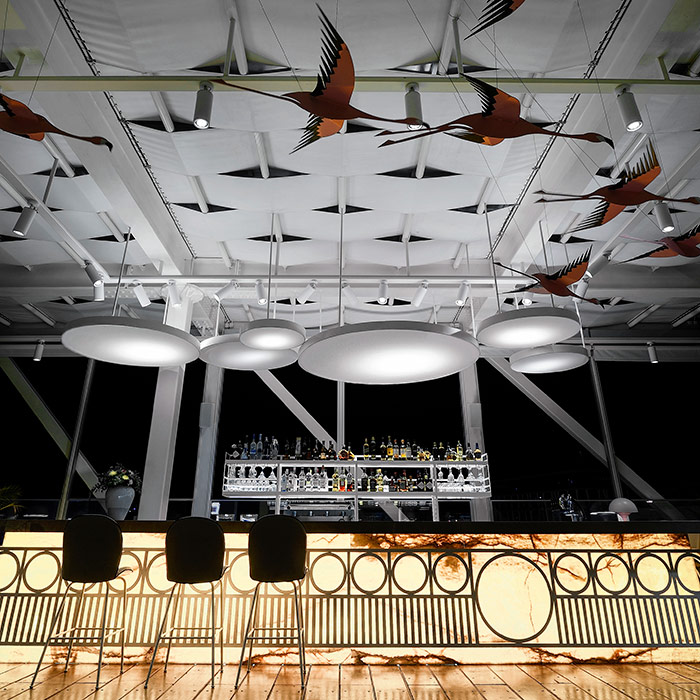 The new bar-restaurant should be formed on a single level separating in the minimum extent the interior and exterior space. In the inside, the operating and secondary services (kitchens, warehouses, WC, etc.) were already constructed and had to be maintained in their original state. As a result, the interior space that could be re-designed was limited to a glass volume, with openings on three of four sides, of which one was actually leading on the terrace and therefore it had to remain partly open. The exterior space consisted of a spacious roofed terrace of nearly five meters height. The metallic structure of the building, its beams and columns were all visible and painted white, playing an important role in the overall impression of the building’s shell. All this empty, white-metallic volume of the building had to liven up and transform into a bar-restaurant that will be able to narrate a clear and interesting story to the visitors. 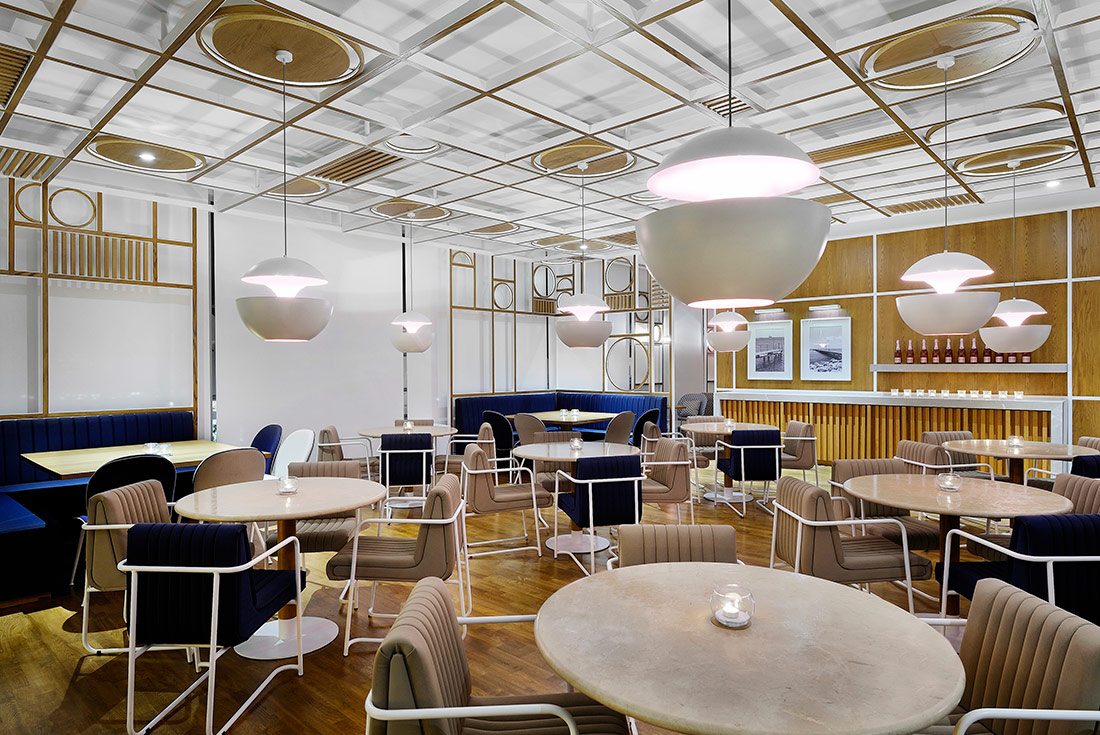 In the interior, a white cubic metallic frame has been constructed, coated on both sides with a thin oak wooden layer, which functions as a grid, where a variation of wooden elements such as little slats and illuminated rings create a three dimensional composition. The metallic grid which was designed as a conceptual idea of a “box in a box” has adequate dimensions in order to surround the whole interior dining area. Moreover, the rectangular openings of the grid, in various sizes, leave proper openings towards the view. Moving on the terrace, the feeling of the surrounding area, the view of the blue sea and the horizon as well as the old port was intentionally left unobstructed. 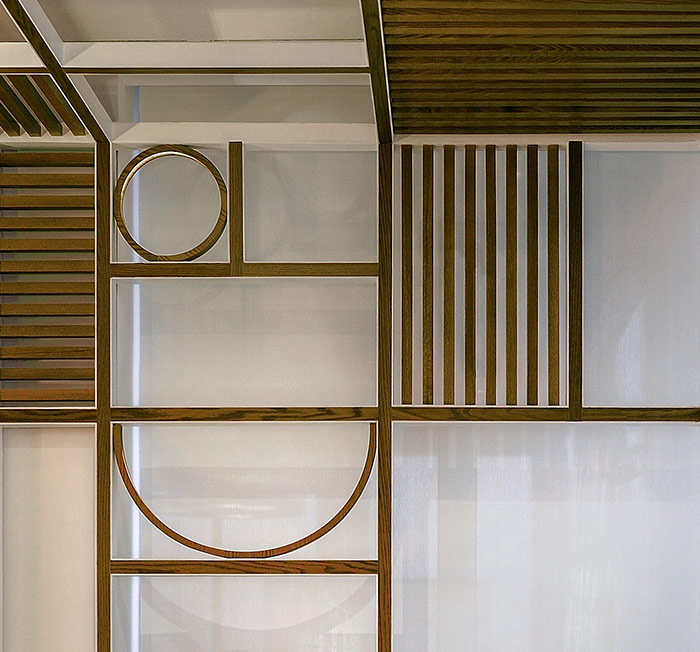 The exterior bar, that has been placed centrically on the floor plan, towards the side of the exterior staircase and covered by backlit slabs of onyx, creates the ideal background for the metallic white composition on the first level which reproduces the pattern with the rings and slats of the interior grid. The volume of the bar is the center of attention on the terrace and being lighted during the night invites the passing by to approach and explore the space. The highest points of the external volume of the terrace are occupied by a flock of pink metallic flamingos in flight formation, which give the impression that by flying, they make their passage through the restaurant symbolizing beauty and freedom. The tropical plants, the pink color of the lighting fixtures and the multicolored bottles on the shelves of the bar complete the color palette of the terrace. Furthermore, furniture made by white metallic frames, having as a background the wooden surface of the floor introduces the white of the building’s structure into the space. The furniture’s fabrics on the other hand, balance between beige and blue (sand-sea) shades with pink touches which compose the final image of the narrative of “Pier One”. 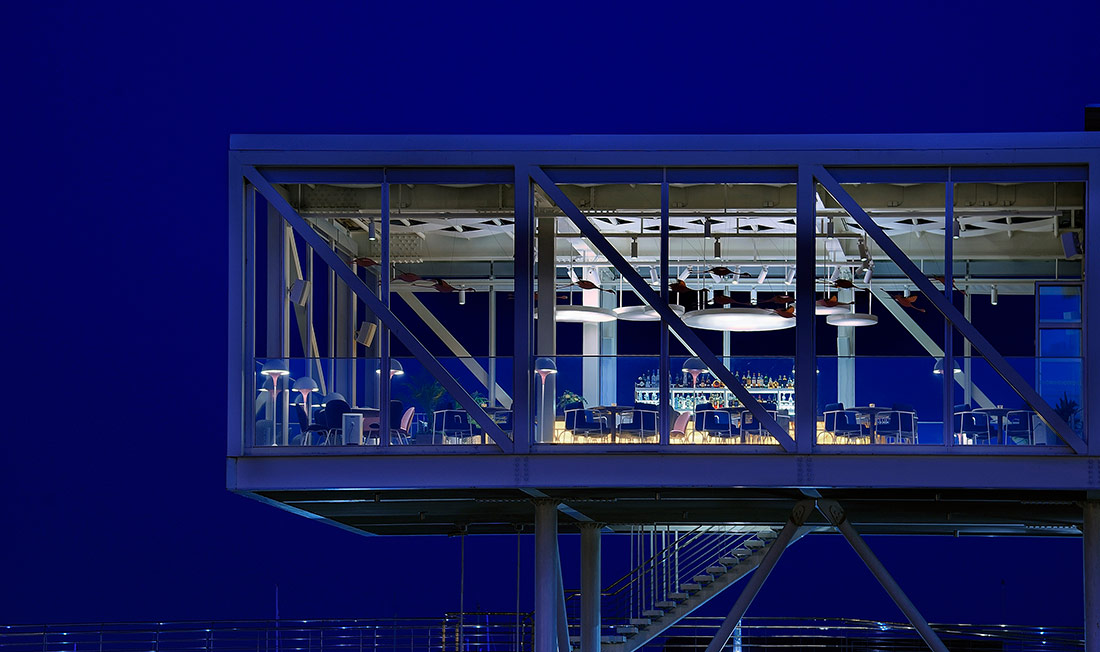