Only a few years have passed by since Béres Architects designed its first realized projekt, the Hideg house in Kőszeg, Hungary. The client, Attila Hideg recently found another interesting property where he intended to create something unusual in a medieval context. As he explains „The apartment in the nearly 400-year-old building needed a thorough renovation after most of its values were damaged or hidden during the last reconstruction works in the 1980’s. We had to virtually step back in time to recall and save the values of the house” 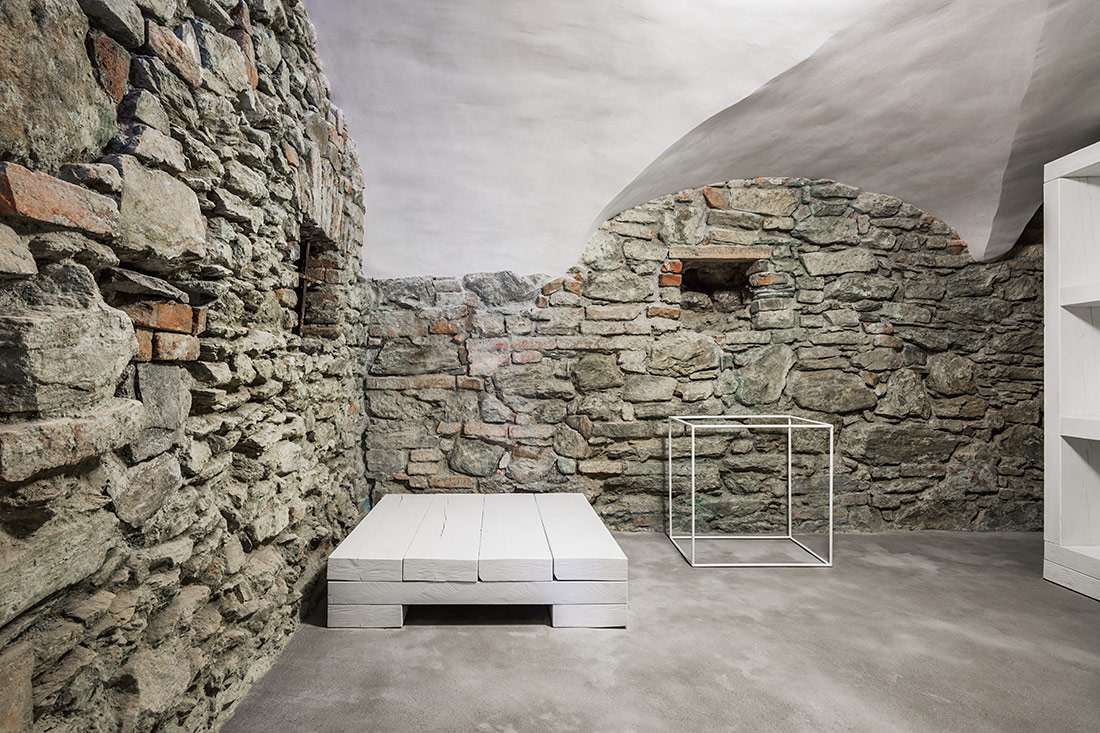 The medieval oldtown of Kőszeg is unique and famous for its intergrity and charming atmosphere. The castle and fortification of the Jurisic family has an extremely interesting history. The most memorable date is 1532 when the Turkish army attacked the town. We found the latest information on the property from the years right after the battle. The house had been built right on top of the outer wall of the moat. Parts of this structure is still visible and exposed on the exterior of the building. A small wine cellar and the rooms of the upper floor were added to the house some time before 1684. In the 18th century the Niczky family bought the property and rented out the small apartment facing the castle for travelling artist and merchants. 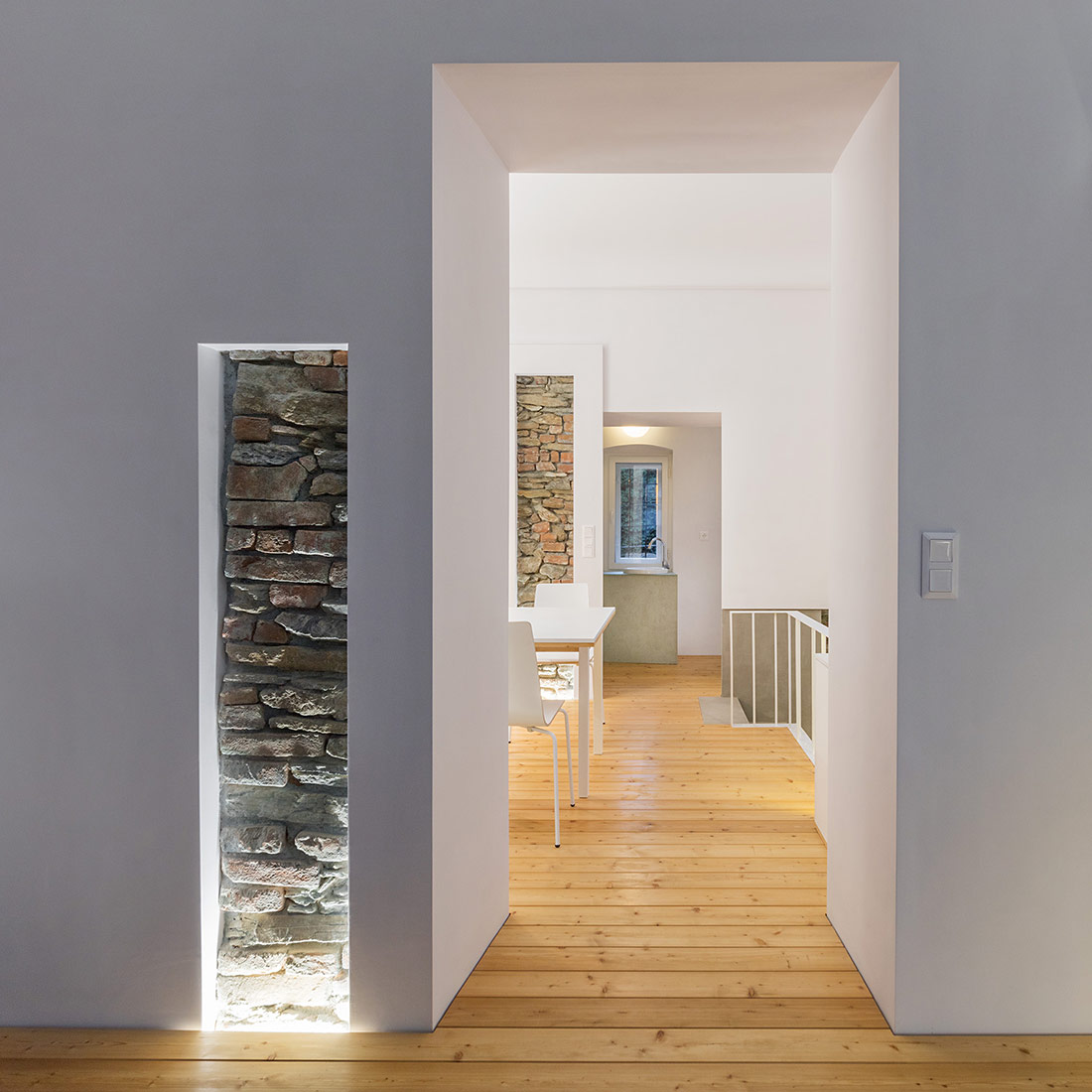 At the renovation of the apartment the main goal was to convert the unit into a guest house again. „We intended to stay away from the rigidity of regular apartment plans and to re-create the lightness and elegance of a hotel suite or a guest house we designed a relatively open plan. By using simple solutions we aimed to create clean and worthy spaces that reflect and highlight the history of the context.”
The arrangement of spaces within the apartment is somewhat unusual. Most of the basement is opened to the small private garden. It acts as a filter space between inside and outside combining various functions for all four seasons such as a wine cellar, relaxation space, sauna and storage. At arrival, visitors immediately experience the ancient walls and the heavy vaults that tell stories about the history of the house and the castle district. 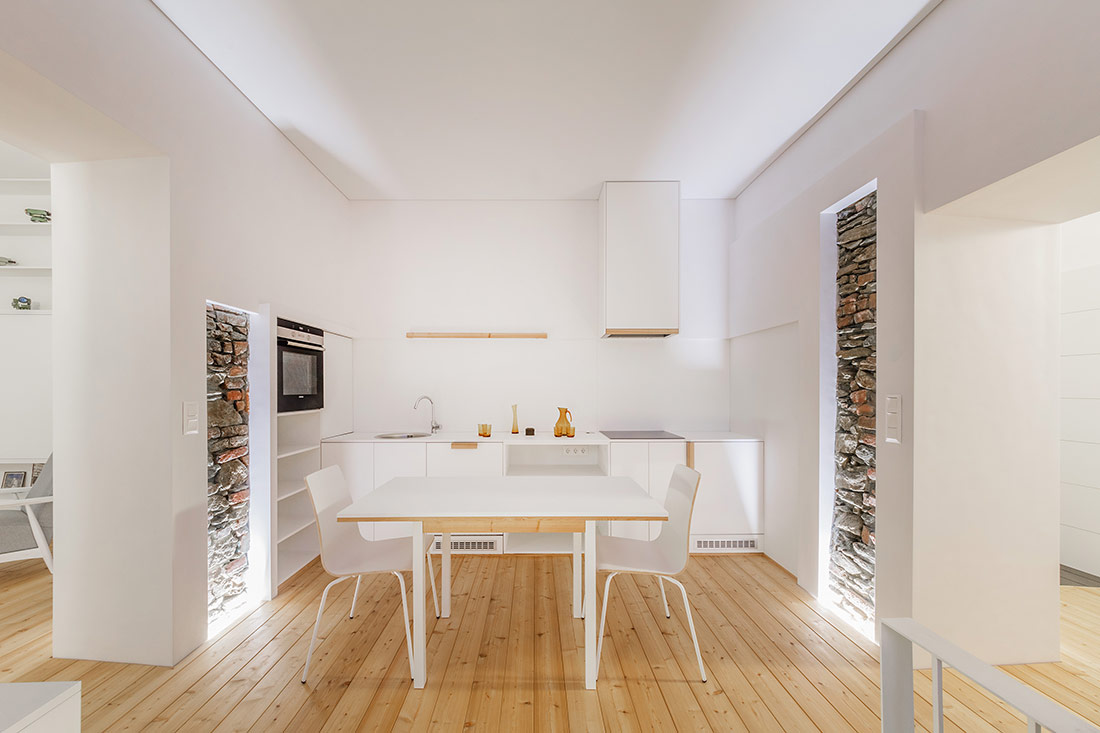 The upper floor consists of 3 main spaces. Framed by the given envelope of the exterior walls, the apartment is divided into a living room-bedroom area, a kitchen-dining area and a bathroom. There are no partition walls or interior doors to separate these spaces. The visual links between the rooms and even the exterior create some sort of classical elegance.
Even though the apartment is situated on the north end of the building, it has windows to three different directions. The surrounding national monuments, churches and fortification walls reflect light into the rooms in unexpected and interesting ways.
„The essence of the climate of the space is given by the centuries-old restored stone walls. Everything else is secondary and helps to highlight the real values,” explains architect Attila Béres the thoughts behind the architectural concept. The walls become younger as they rise. Every layer has a story about the past – the Turkish siege, the great fire and periods of resurgence. They carry marks of craftmanship quality or even necessity.
Most of the new surfaces are white, moderate and simple. The oiled larch boards of the flooring return as decorative parts of the built-in furniture. „We used small and simple signs and gestures to link the elements of the space. We defined clear but not harsh boundaries between old and new parts. Silent tones,” says Attila Béres. 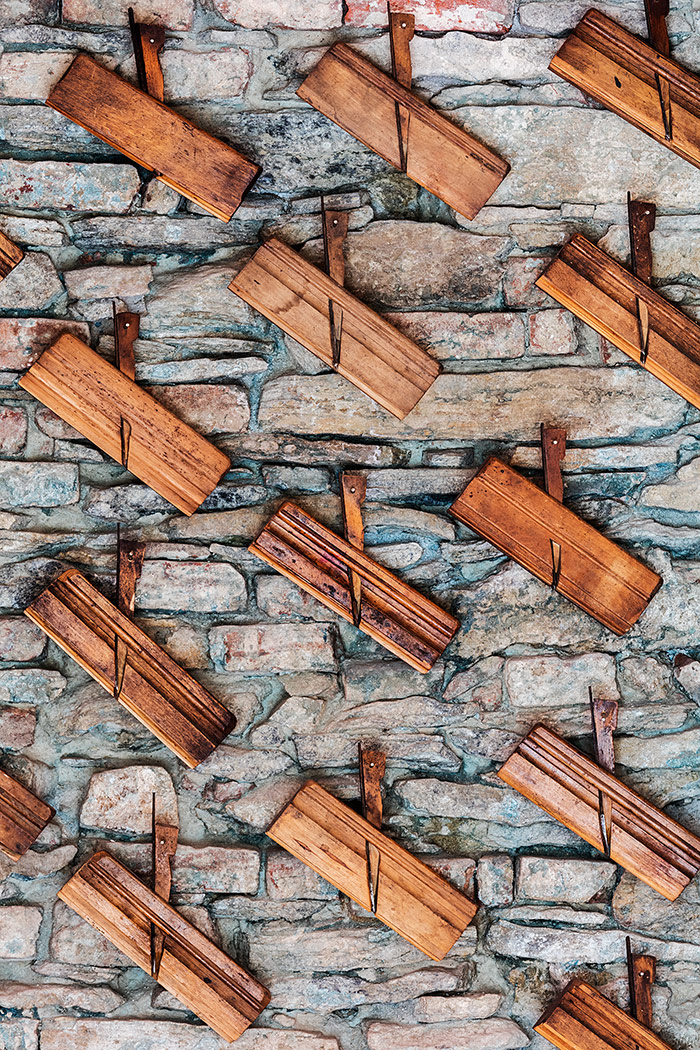 The architect describes the process as uplifting and special. „We knew that the worth of the building is hiding behind the layers of plaster. Together with Attila Hideg we kept updating and re-evaluating our thoughts along the phases of the design and construction to get the best result. It is almost impossible to compare this method with the evolution of the design of a newbuilt house. A tricky and interesting field for us to test how we behave outside our architectural comfort zone.”