In the east side of the city, on the site of a large textile factory called ILSA, between the main boulevard entering the city centre from east and the Bega Channel, a new development – ISHO – is now in progress, a complex mix of functions with a five stars Radisson Blue Hotel, A class offices, retail, socio-cultural spaces, leisure and residential, underground and above-ground parking. The new small city will include a segment of the second ring of the city together with a strategic bridge over Bega. A second pedestrian bridge will continue an important pedestrian road connecting ISHO with another historic district in the east of the city, Fabric. The development will act as a big scale connector, between the boulevard and the river bank, between north and south, between its inner strip and the historic covered market to the east. It will offer both transparency and intimacy, and will visually integrate – via panoramas and visual axes – the historic southern front on the riverbank and the Millenium Church in the core of the Fabric district.
The southern edge will contain apartment buildings, offering multiple views to the riverbank and traditional districts across the river. U1 is the first among them finished. The management of the complex fluxes, connections, thoroughfares, viewing directions and panoramas influenced the planning strategy, the architectural design, the inner landscaping and even the detailing of the apartments enhancing their views. The U shape is generated by outside differentiated spaces, the semipublic one in the courtyard oriented to the river bank and the public pedestrian spaces on the other sides. The entire building is composed of three segments, each with its stair and elevators, all of them are rough on the convex sides and smooth inside, on the concave sides. The shape is structured in elevation as well, with a strong, well-defined corniche at 15 m and with the last two levels of exclusive apartments covered in grey ventilated fibro-cement cladding. The loggias are very important inside/outside “rooms”, added volumes on the rough sides or hollow spaces on the smooth ones. There are 203 apartments, varying in typology, each of them with a parking place in the underground level. The ground floor level oriented to the pedestrian public spaces contains retail and services, while all of the ground-floor apartments are courtyard-oriented.
U1 is a piece in a complex puzzle – it is not an autonomous object, but an integrated one. 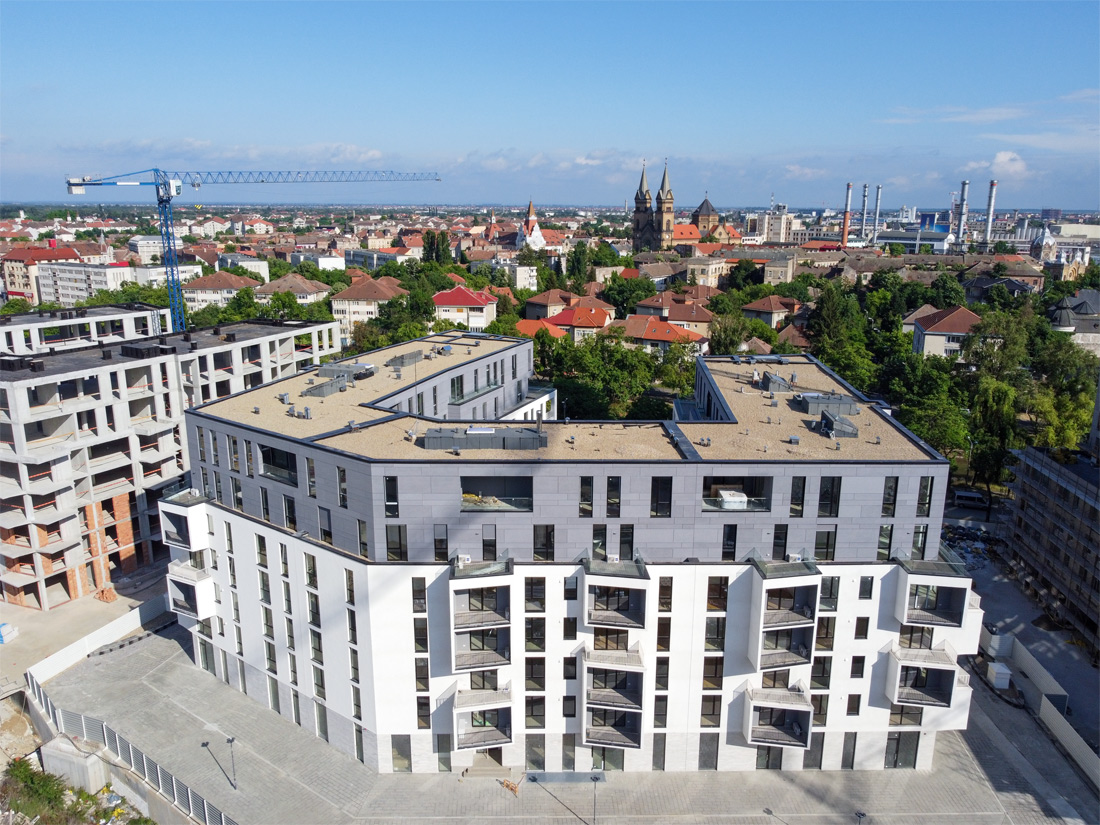 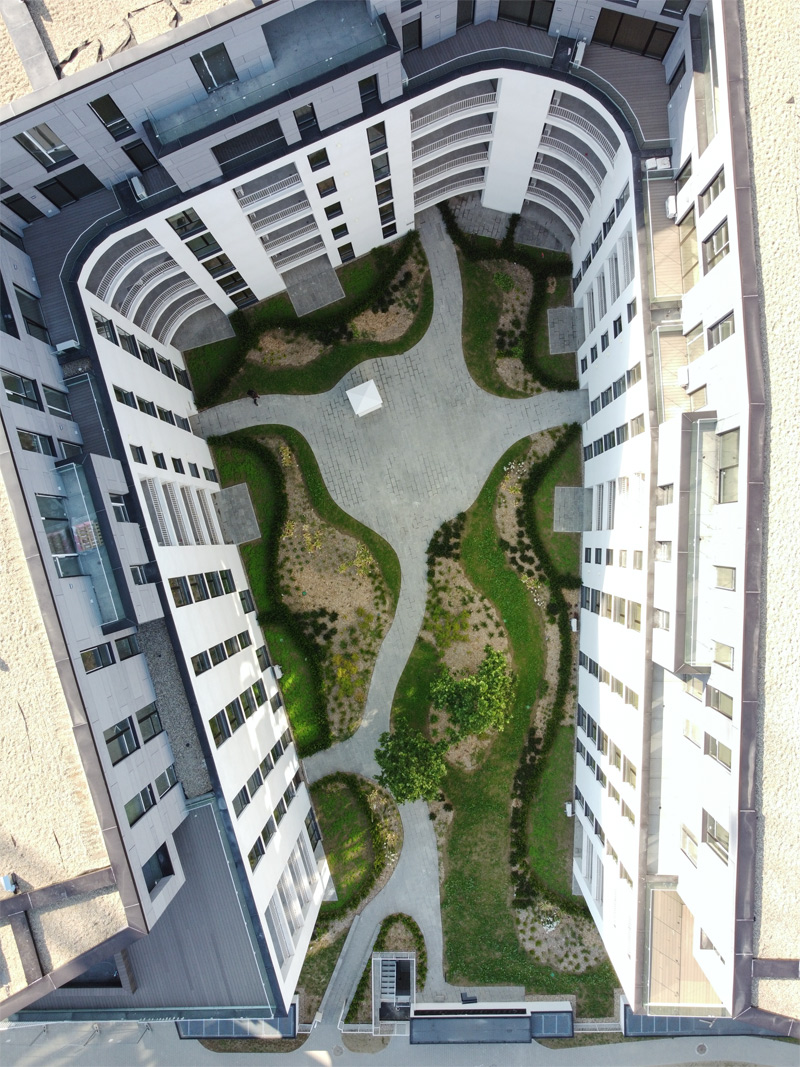 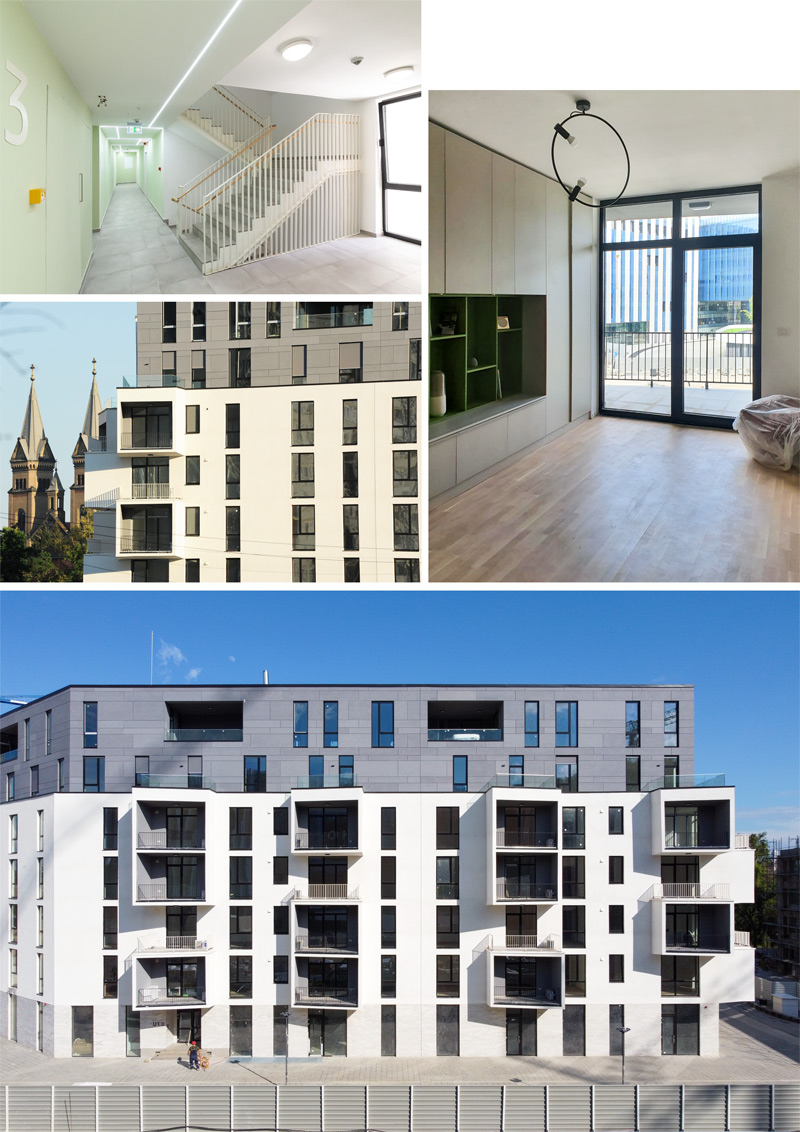 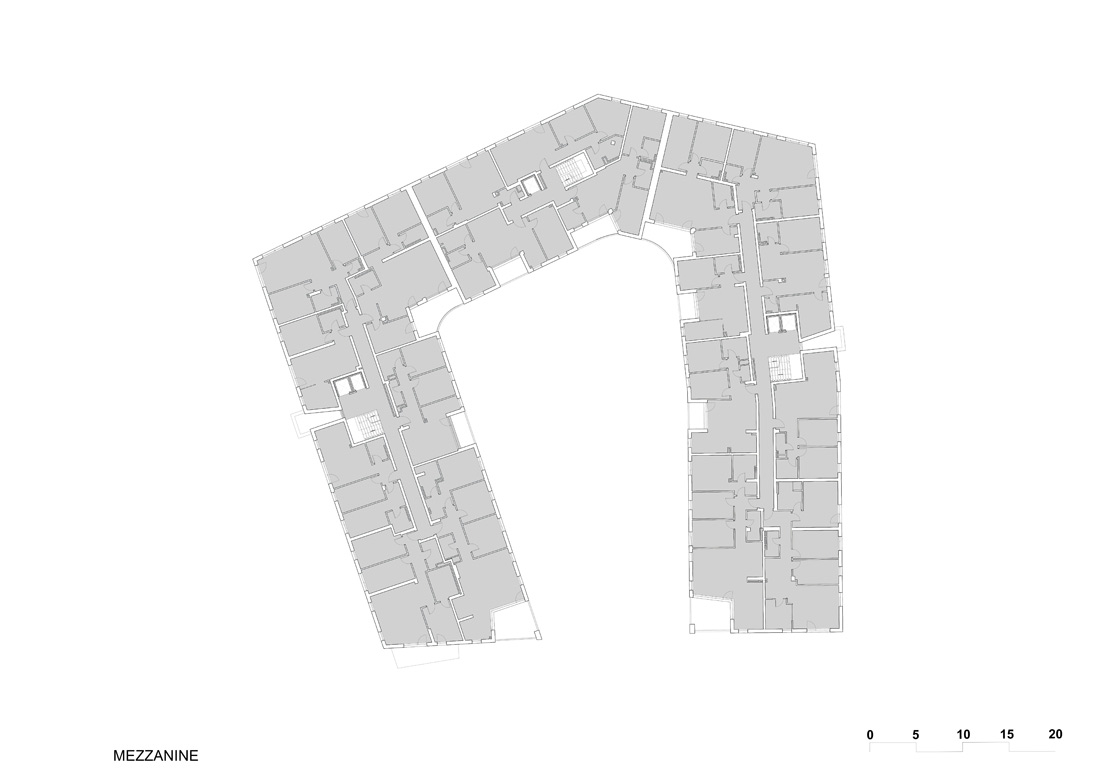 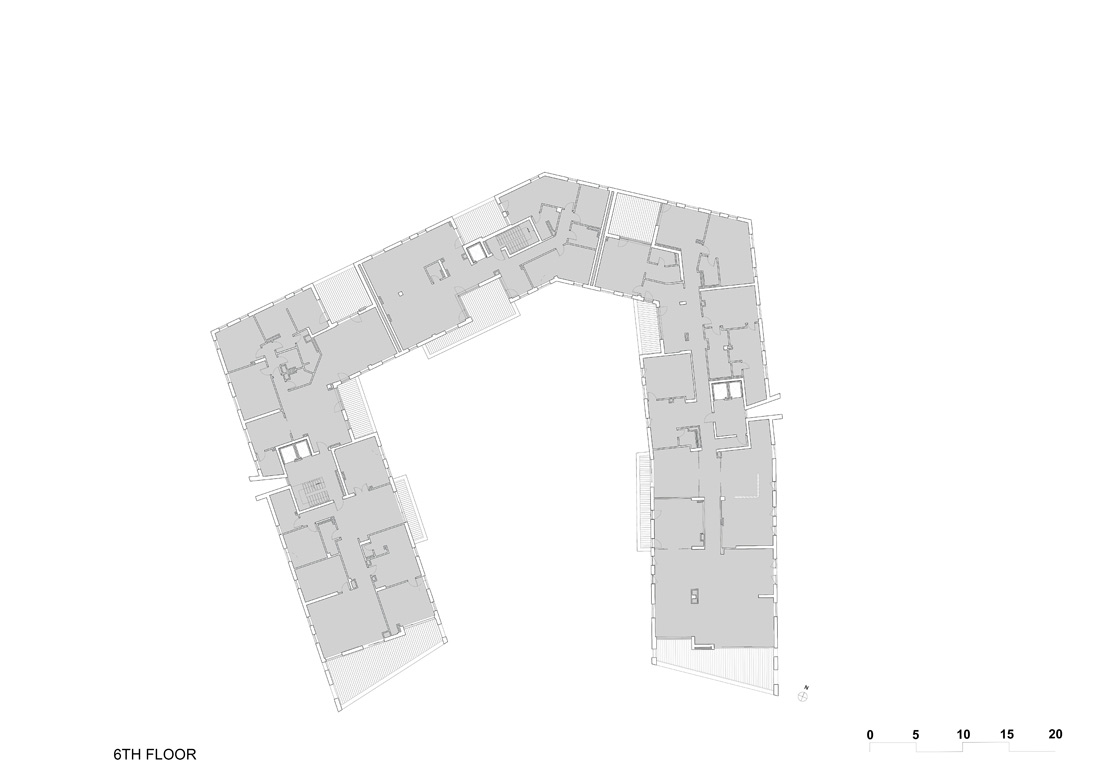 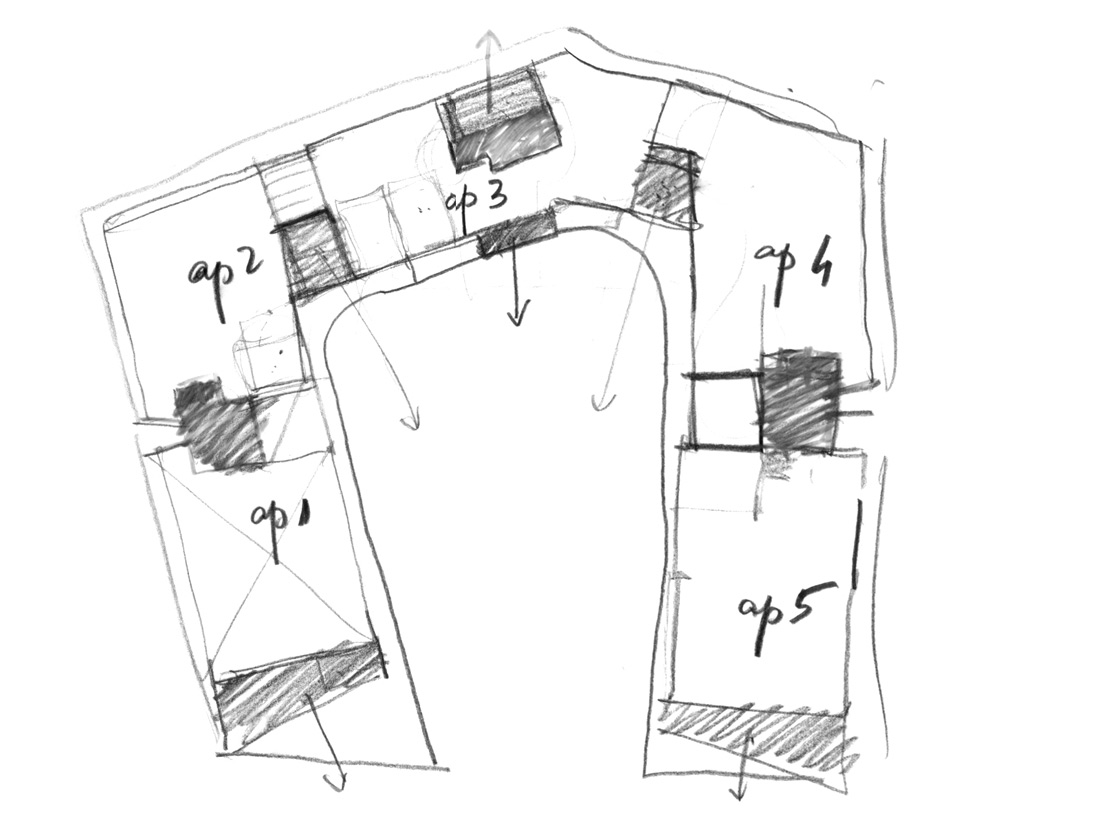 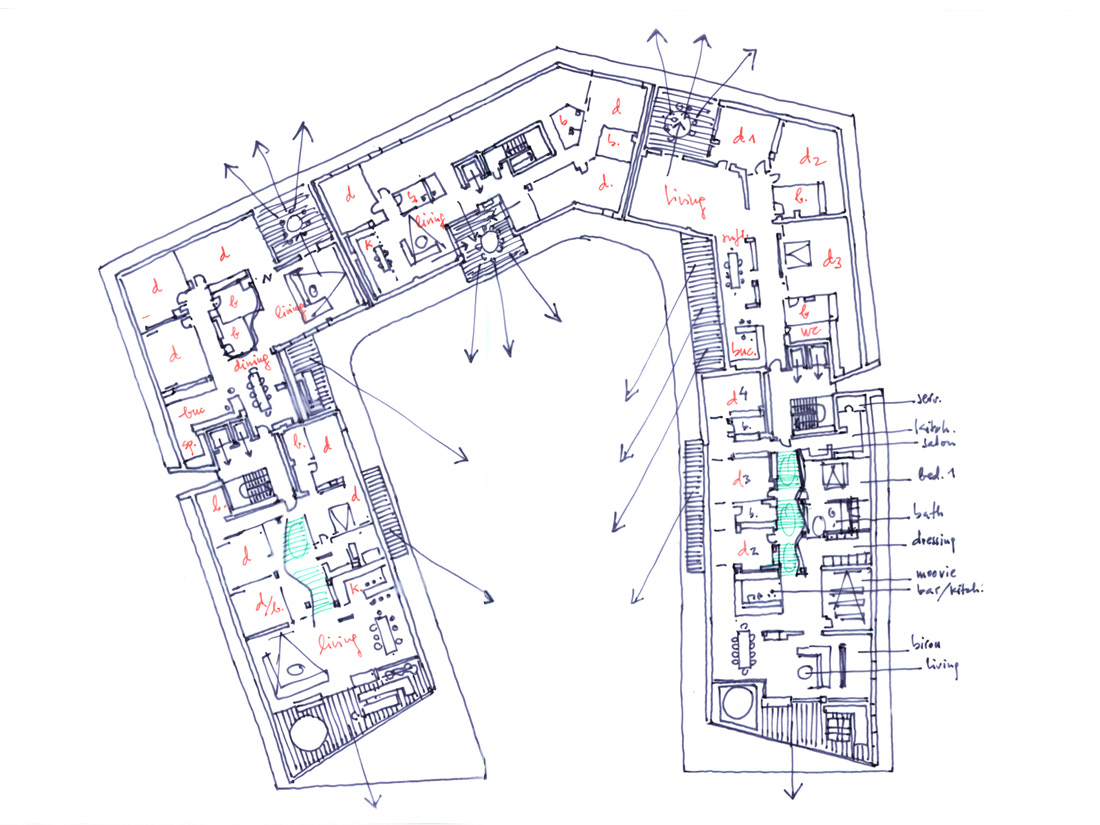