An exercise in landscape transparency, by which a relatively large volume gets acquaint¬ed with the scale of the place, and especial¬ly with the cultural landscape in Transylva¬nia’s Székler Region. The terrain for the project lies at the edge of the village, within the former agricultural production co operative, whose buildings were either demolished, or heavi¬ly adapted. The long nearby building is hosting horse stables. The St. Francis Foundation, set up and run by Franciscan Priest Böjte Csaba, is concerned with caring for and edu¬cating orphan or impoverished children. Since its set up, it has cared for over 6,000 of them. One of the goals of this foundation is that these children should be able to learn a trade, that they could use to make a living once they leave the homes. Therefore, the Sânsimion village kids are riding, they get used to the horse, and, besides learning a trade, they are more balanced and fare better in school.

Considering the weather in the Ciuc area, outdoor training with horses can only take place over three months a year. With the aid of the roofed riding stables, this peri¬od can be extended throughout the year, which means saf¬er horses, with a more balanced temperament, that is, in¬creased safety.
Intermediate tech and public character
Given the community character of the project, the budg¬et was a modest one, with implications on the solution, but also on the fees, the design work being partly pro bono.
The standard solution for such a building in today’s Romania would have been a sheet metal industrial build¬ing. However, it seemed essential to us that we use the traditional material of the place—wood, not only for inte¬gration with the local spirit, but also as a local resource; re¬sources meaning not only the material, but also techniques, knowledge, community values. The children’s awareness of such values became one of the project’s educational components.
The riding stables need to protect from the rain and the snow, and, partly, from the wind (horses are not both¬ered by drafts), but not from the cold. Therefore, a tight¬ly sealed space was not needed, but a roof, and underneath it, a delimited, aired and relatively transparent place. Quite like a barn, actually, a much larger scale barn.

For the above reasons, we leaned towards an inter¬mediary solution: neither industrial high tech (which was inaccessible, budget wise, and, in any way, it would have eliminated the connection to the place), nor a tradition¬al interpretation (which was virtually impossible, given the openness of the space).
The structural solution is an “architectural engi-neering”one; it is precise, calculated. However, glued lami¬nate wood or similar solutions were not used, but the rela¬tively thin boards of hard wood, screwed together to make elements with a wider section and then, as in the case of trusses, more complex structures. “Modern” design is ma¬terialized through intermediary techniques, somewhere be¬tween classic craft and industrial production.

The panels supporting the roof boarding and the tin sheet cover were placed unconventionally, namely diagonally, and not perpendicular to the direction of the farms. Their span does not increase significantly, but, together with the truss’ upper edges and the longitudinal beams, they build a series of interlocking triangles, thus stiffening the general struc¬ture. A secondary advantage is that, being exposed, they look good on the inside, and, together with the light from above and the one softened by the lateral lattices, they give an air of public building, of a place of a certain command¬ing appearance, and not one of a strictly functional building.

Otherwise, this structure, visible in the 3D model and in the site photos, is absolutely stable. The lateral clo¬sures are just protecting the interior (but also the roof) from the wind. They come as a skin made of thin wooden pro¬files, mounted in the easiest possible way, and with varying degrees of transparency.
The access to the riding stables is done in sever¬al ways. The two main doors on the front are for horses, the small inside of them are for people—rather for a technical, functional circulation. The large ones also serve people, in case of community events needing large evaluation flows and a great opening of the interior space. The two diagonal entries have a public character, allowing the direct access to the tribunes.

Further on—growth and repetition
The current colour highlights the building against the rest of the village. However, due to light coating materials, it will become grey, like the shelters in the area, and will blend better with the landscape.
The riding stables are created in such a way that, when the budget allows it, they may be extended by an identical module. Thus, the actual exercise space will ex¬pand from 20×20 to 20×40 meters, which will allow the or¬ganization of national and international equestrian events. Basically, the current access facade will be dismantled, the new structure will connect to the old one, and the facade will be re assembled on the new end.
The building of Sânsimion has also become a pro¬totype for similar equipment in the area. The next building will shelter an equestrian centre in Sf. Gheorghe, with ad¬aptations to the foundations and to some details. The com¬bination between the archetypal form, the regional material, and the flexibility of openings, given by the building system, will allow, we believe, a real adequacy—to the situation of each place and to the specificity of a cultural space. 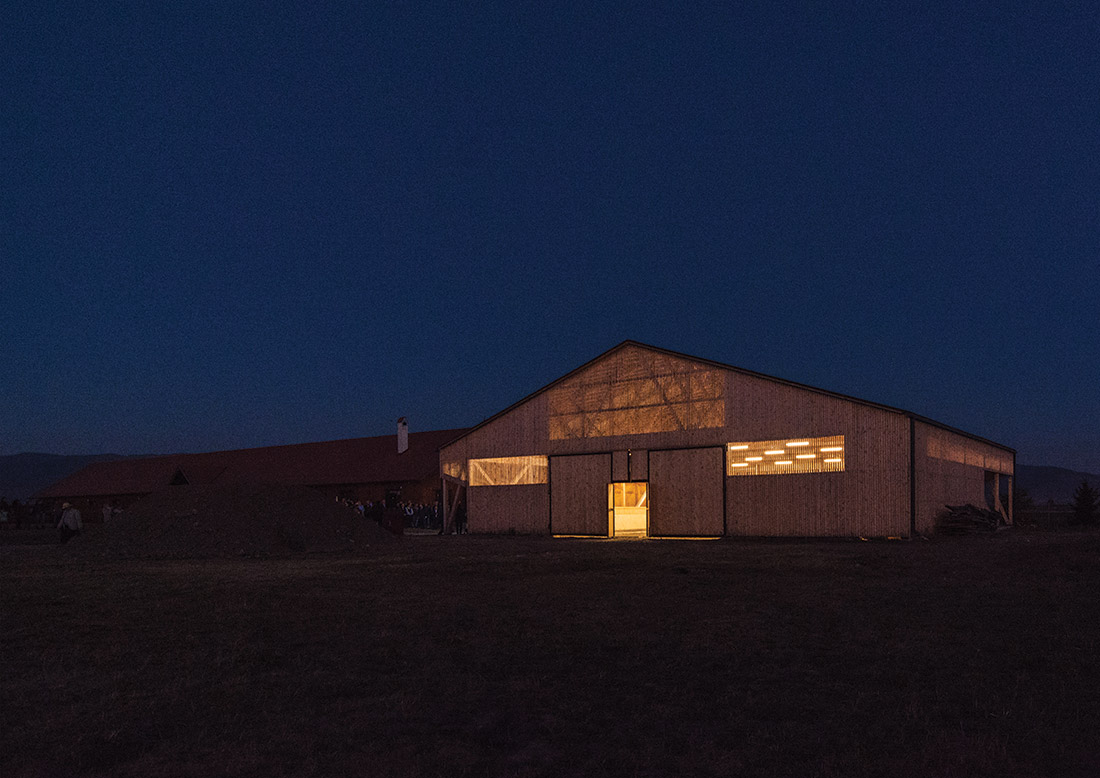 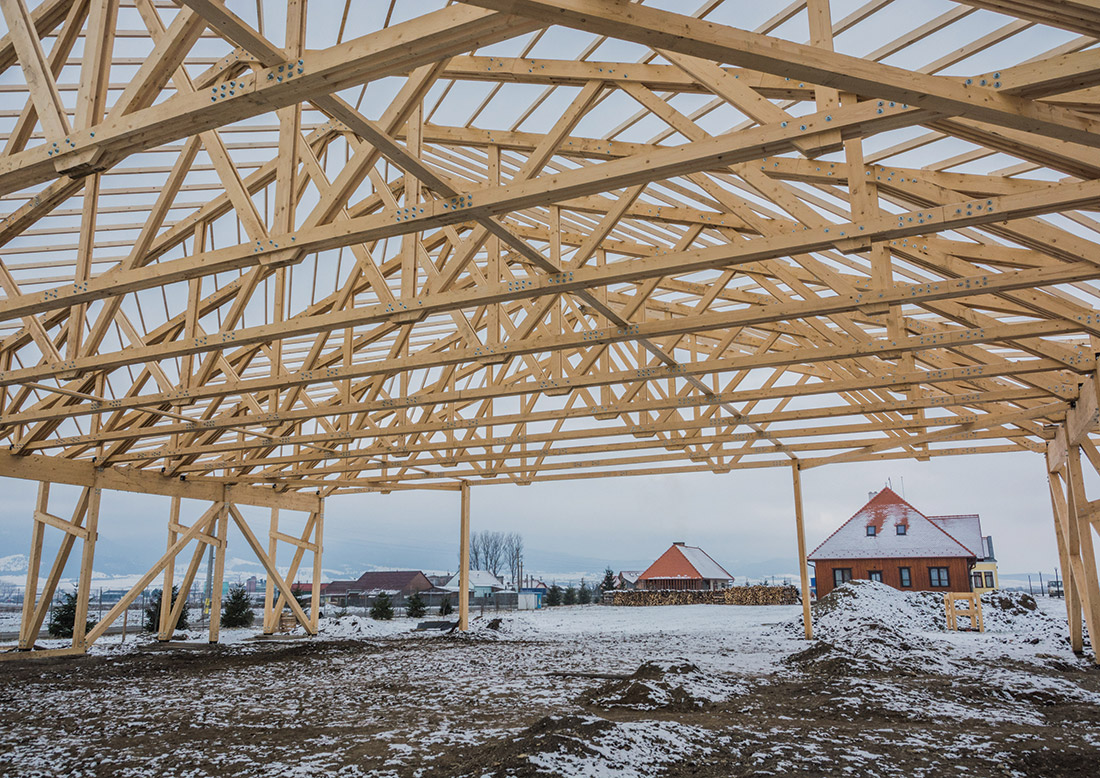 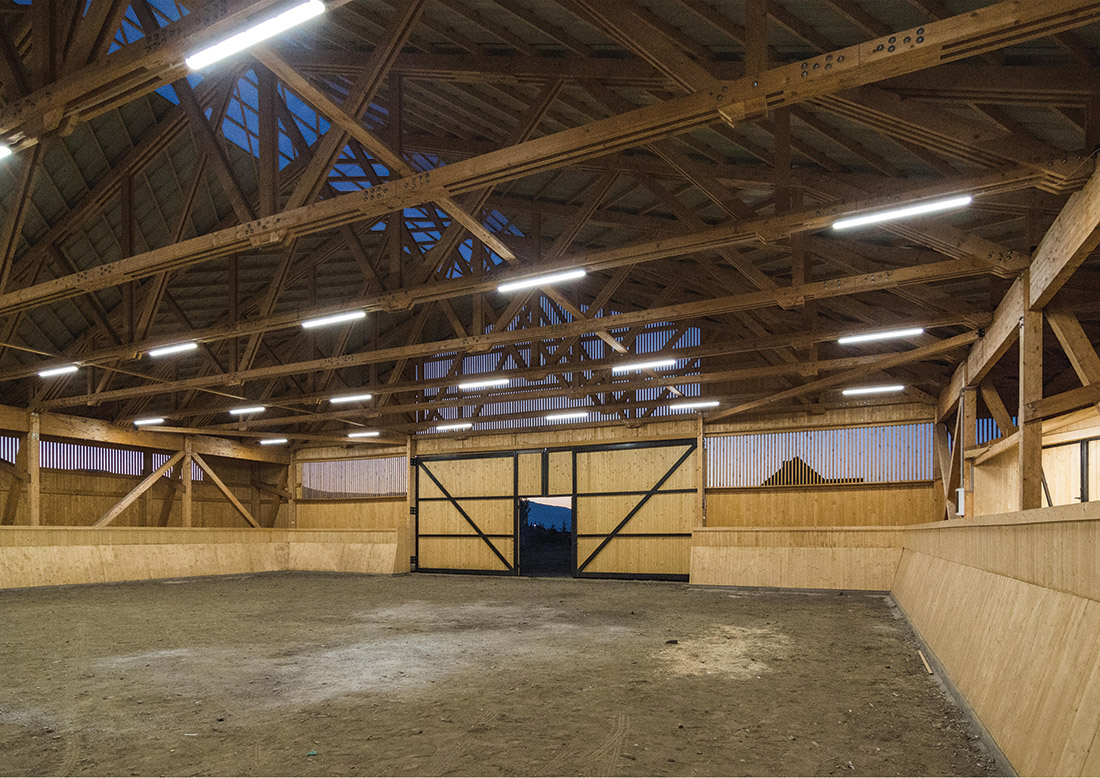