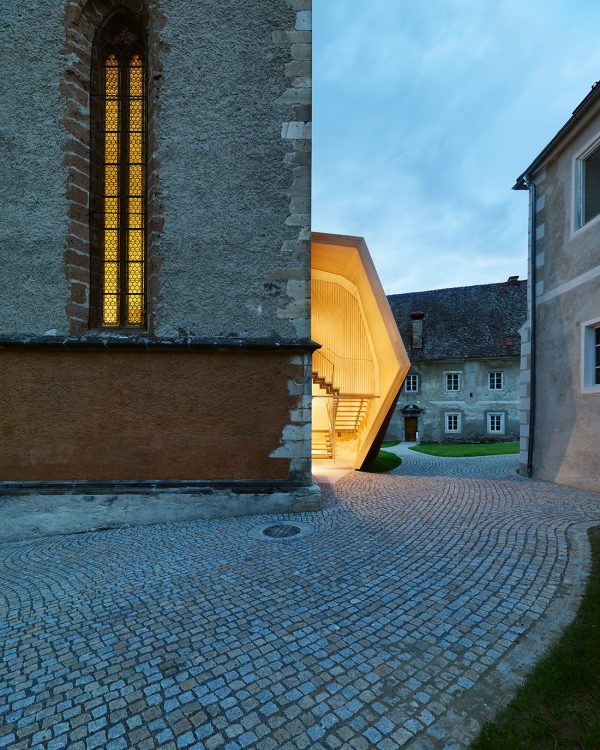 St Peter’s Church was built from 1424 onward as a hospital and parish church and converted to the baroque style at the end of the 17th century. After being deconsecrated by decree of Joseph II in 1786, it was long used for other purposes. Not until 1897/1898 was it recreated under historicism, making use of old Gothic inventory.

The single three-bay nave and side aisles are bounded to the east by a narrowed choir with one bay and five-eighths termination. The decorative vault paintings probably date back to the time of building and may have been renewed after the fire of 1471. The stained glass was done in 1898. The murals on the western and northern walls were created in the style of the Nazarene movement by Felix Barazutti in 1906 and 1916 respectively. Instead of a medieval wooden matroneum, a brick-built gallery was installed around 1680 but was demolished in the course of renovation in 1969. 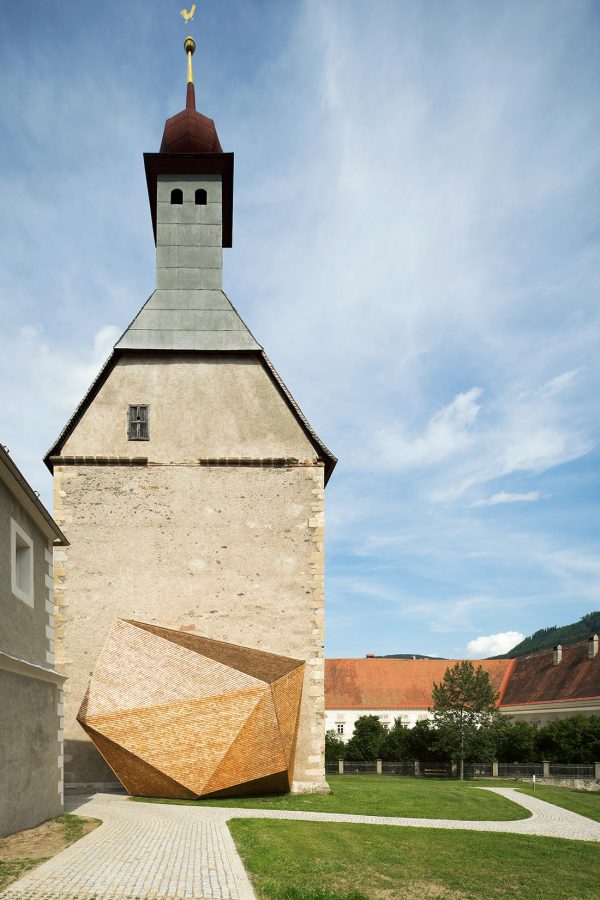 The collegial body had long been planning the conversion St Peter’s combined with partial renovation. Preliminary analyses and the initial steps of planning began in 2015. The aim was to furnish the atmospheric interior of the church so that it could be used as a weekday church and also for events better held in an intimate setting than in the expansive collegiate church.

On the one hand, conversion work was intended to restore the beauty of the Gothic building with its graduation in height, colouring and lighting and, on the other, to create a contemporary atmosphere for celebrating ecclesiastical festivities in this setting. Because restoration of the murals and stonework inside the church exceeded available funds, it was decided to clean the surfaces and carry out only minor colour retouching in keeping with accepted conservation practice.

Over the centuries, the level of the church floor had risen by half a metr, detracting from the overall height of the interior and causing the bases of the stonework to vanish. The original church floor that still exists in parts—a grayish brown lime floor—was uncovered. Coordinating with the Federal Monuments Office, a roughly 14 cm thick new floor was installed on top consisting of vacuum insulation, reinforced heated screed, and poured flooring whose colour and texture are similar to the original lime floor. By decreasing the height of the floor it was also possible to make the main entrance on the north side barrier-free.

The chancel was moved into the nave. Now, at the center, is the new altar of red Adnet marble. The cylindrical form and material are special references to the history of St Peter’s. In addition to the altar and ambo, the aim was also to create a matroneum, a portico with stairs, church door and entryway as well as the entire furnishings and lighting. The formal idiom of the portico and matroneum was developed on the basis of themes from shipbuilding that are entrenched in collective architectural memory as architypical elements of modern architecture. Incidentally, this metaphor has always been linked in the history of ecclesiastical architecture with St Peter the “fisher of men”. However, aside from all of the possible interpretations, we hope that people will be able to perceive the continued use and revival of this formal idiom as both a discrete from of architecture and as a contextual act of building in the ongoing history of St Peter’s. 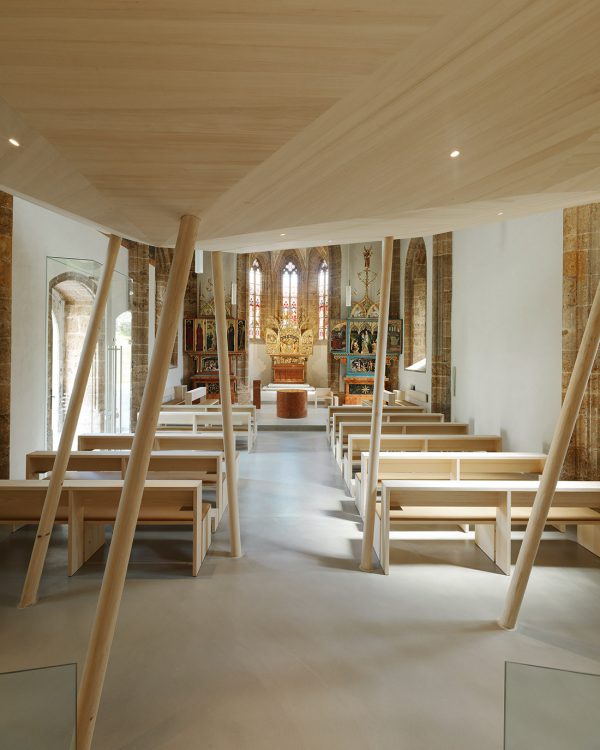 The use of wood, a material that defines almost all new architectural elements, also harks back to the historical fabric of the building, for example the original matroneum, as well as to the fact that wood has ever been a key element of modern church design. The sophisticated technical and aesthetic form of use makes reference to a current architectural discourse, while at the same time following in a long tradition of building elements in church architecture. 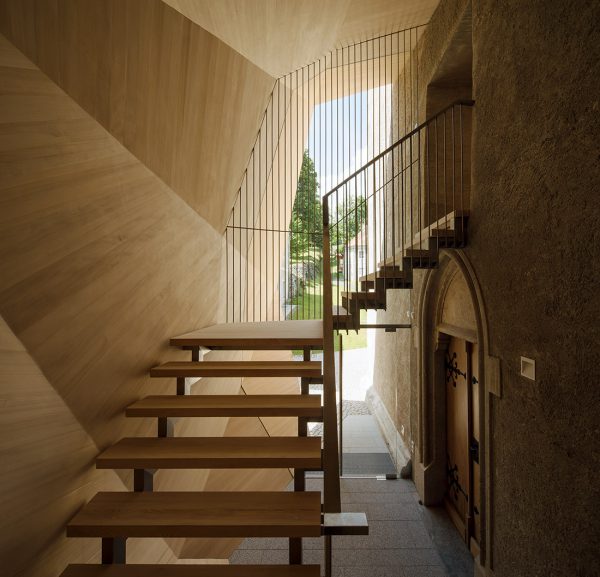 Inside the new portico, a light stairway runs up to the matroneum. This is where the historical stairs would have been located outside the church, with a number of traces still visible on the facade. The folded shell of the portico was built from crosslam on prefab foundations. The ventilated facade is lined on the outside with the same larch shingles found on the church roof. Like the portico, the new matroneum is a timber structure. It was erected on round timber posts in bucket foundations. All visible wood surfaces are untreated, knotless fir. In addition, only rift and half-rift boards were used for facework. The untreated wood is an attempt, in the semantic field of the church, to create a form of material truth that has largely vanished from our everyday world. The sanded, but otherwise untreated building material may remind us that there still exists a perception beyond all perfect, maintenance-free and, ultimately, arbitrary surfaces. 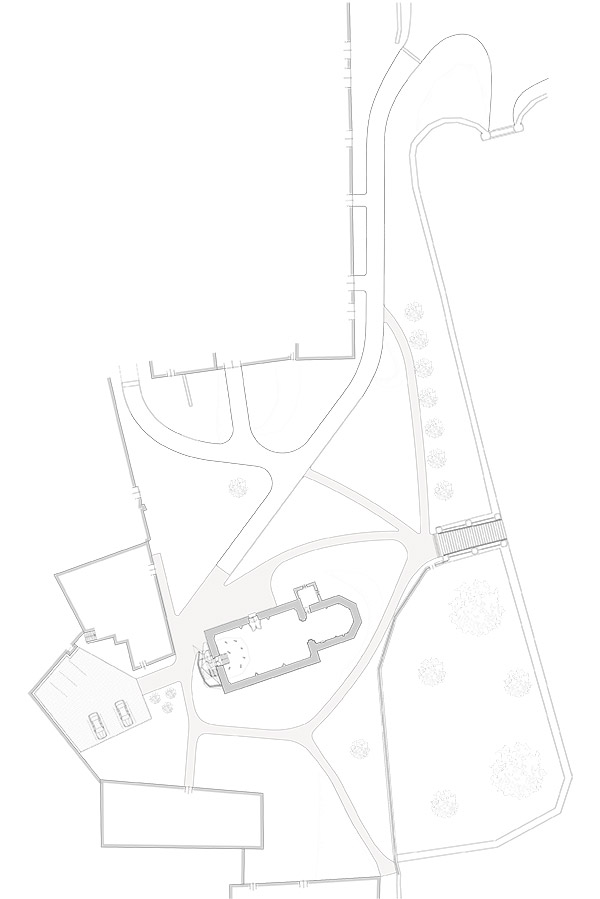 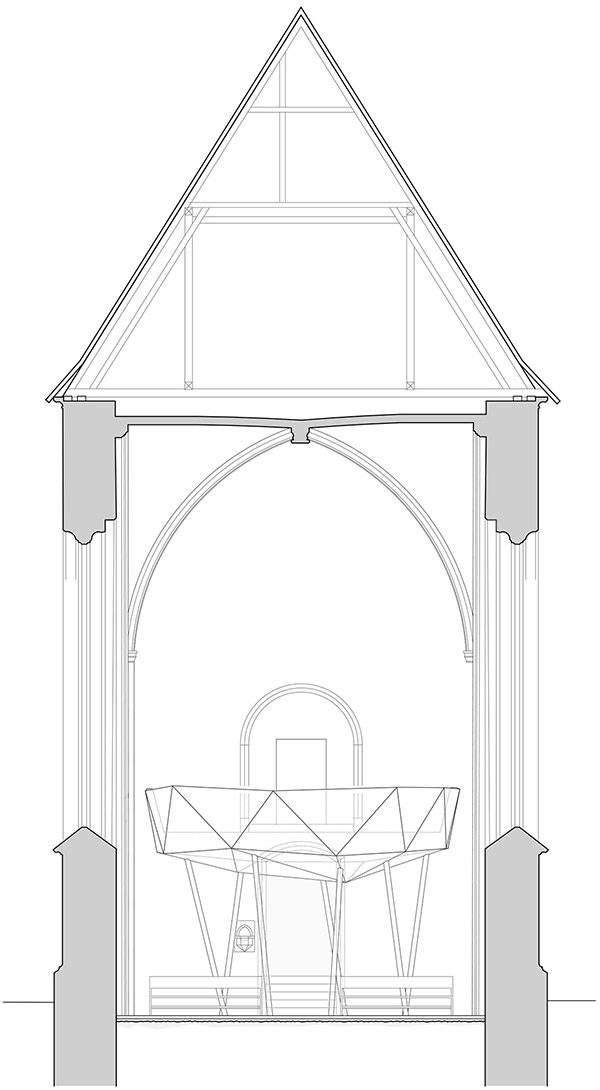 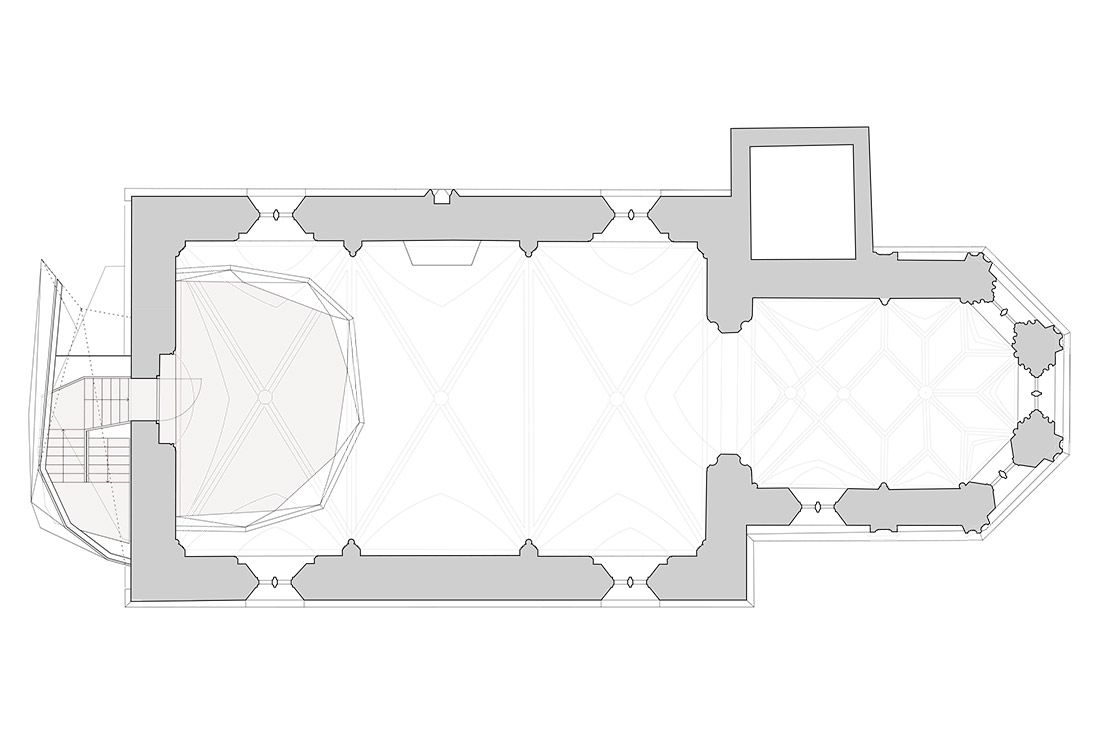 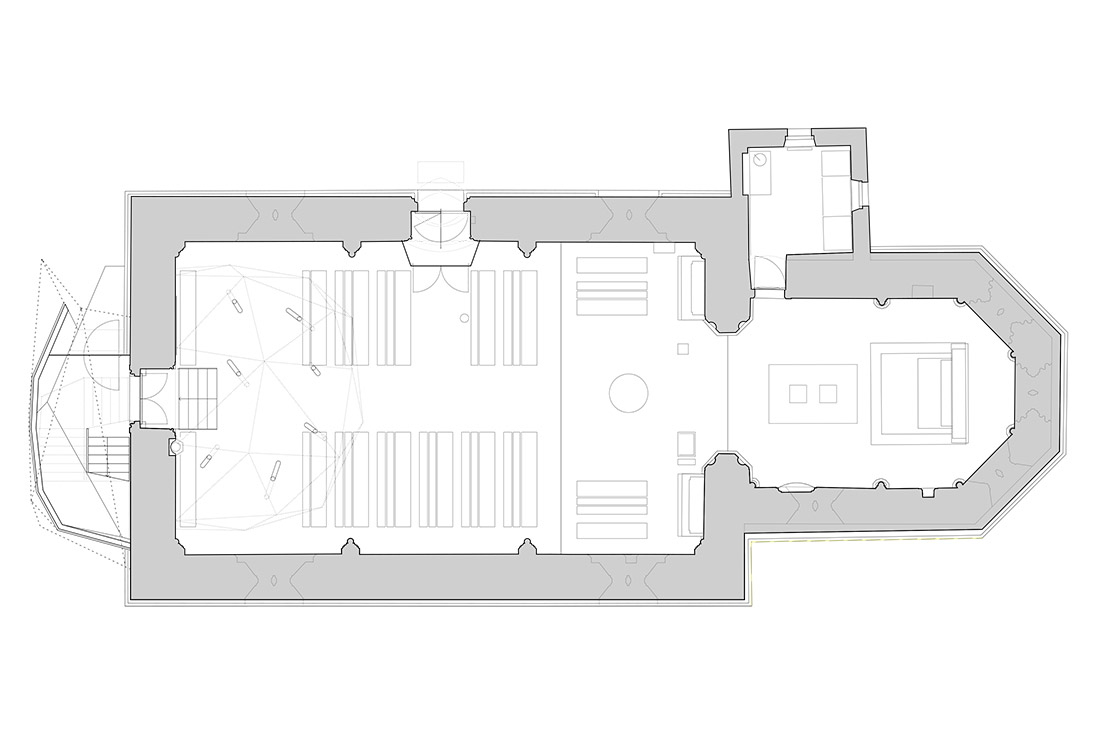 Our office,reitmayr architekten, has existed for about 20 years. We work mainly on renovations and reconstructions of buildings from the middle ages to the late modern. We focus on a few projects to be able to produce a very good quality in planning and execution. Basically, we also always try to integrate the furniture planning into the projects. At the moment we are dealing with cost-effective housing, 2 school projects, a one-family house as well as a theater and cultural center. 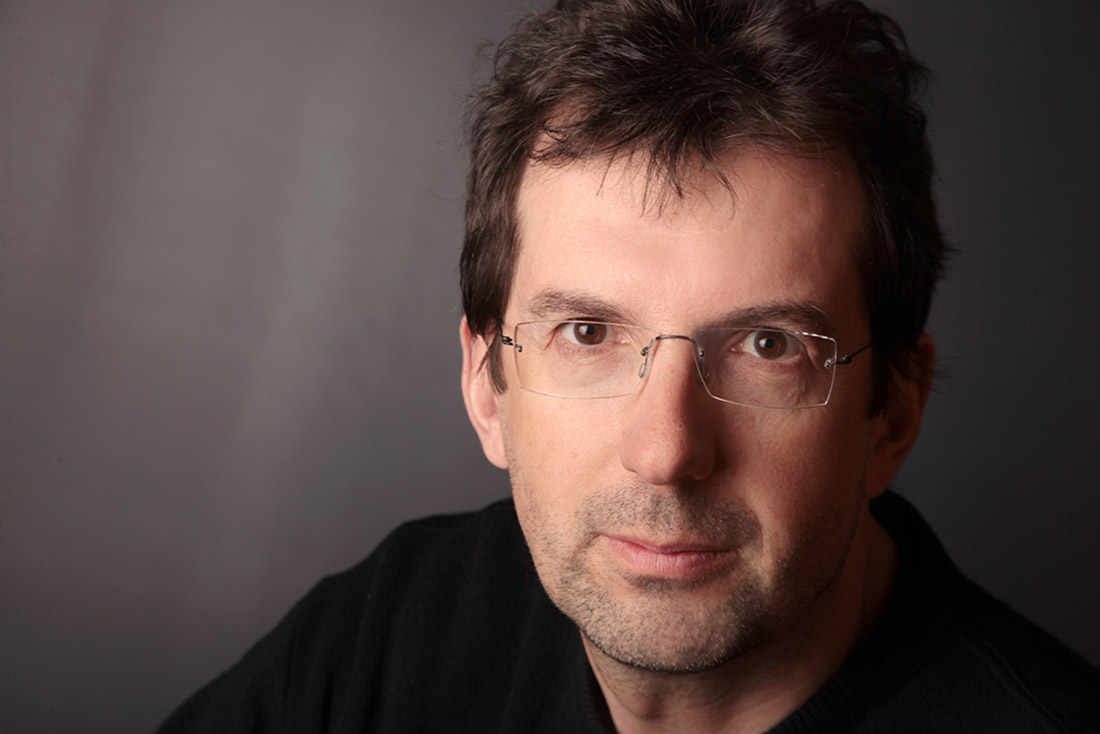