POLYTOPO is a low-cost intervention proposal to the interior of “polykatoikia” apartments in Greece, based on a new construction system aiming at upgrading devalued properties.
The polykatoikia (apartment building) constitutes the residential building type, housing the greater part of the population in Greek cities. It combines a European system of organized construction with local air, tradition and “Greekness”. Out of the 6.384.353 residences in Greece 44.7% are in polykatoikies of which 96.1% are located in urban centers. 64.7% are inhabited and 35.3% are empty (the highest proportion of empty buildings in the European Union).
With the downturn in the economy the phenomenon of empty apartments, particularly in the urban centers has emerged.
Although apartments no longer correspond to the desirable standard of living of the average resident today, still they remain the sole housing solution currently available in large numbers.
The need to find solutions for upgrading and reusing existing apartments has become imperative, while also renewing and modernizing their image, since their use is far more economical than any other alternative. 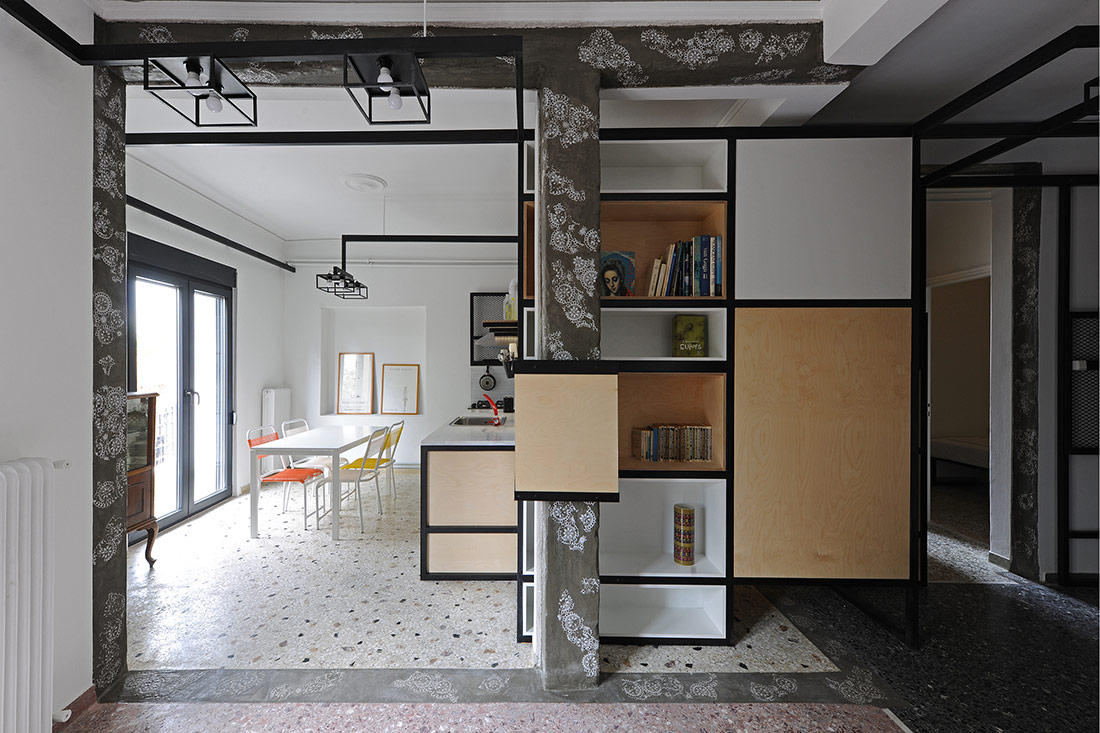 TOPOS is the field on which we propose to intervene and refers to the apartments’ interior and the air shafts of the polykatoikies built between 1955-1975, since these are the ones most in need of immediate renovation.
Maintaining the shell of the apartment and some internal walls the intention is to recycle and re-use the materials of the apartment, incorporating them into the new design.
The areas that usually require renovation, i.e. the kitchen and bathroom are brought together in a portion of the apartment near the air shaft, which is used as a main routing shaft for the apartments’ infrastructure networks, serving the functional conversions, which take place in the apartments. 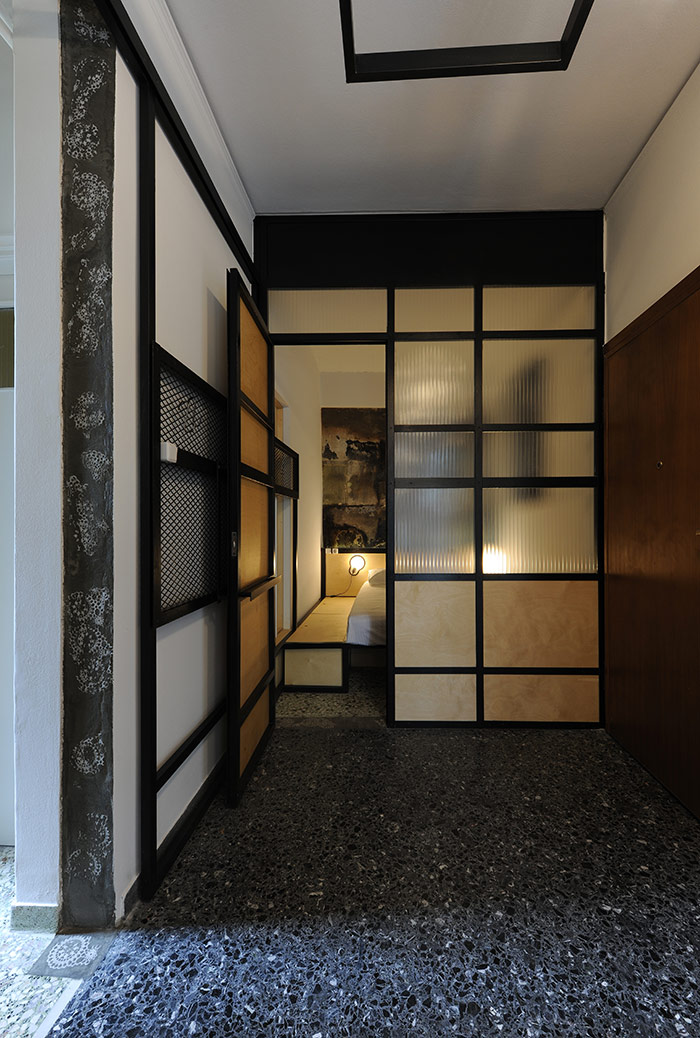 POLYTROPO, a modular metal construction, is placed in the apartment. It organizes the area and becomes the carrier of its infrastructure. This construction could be subject to change according to the user’s requirements. 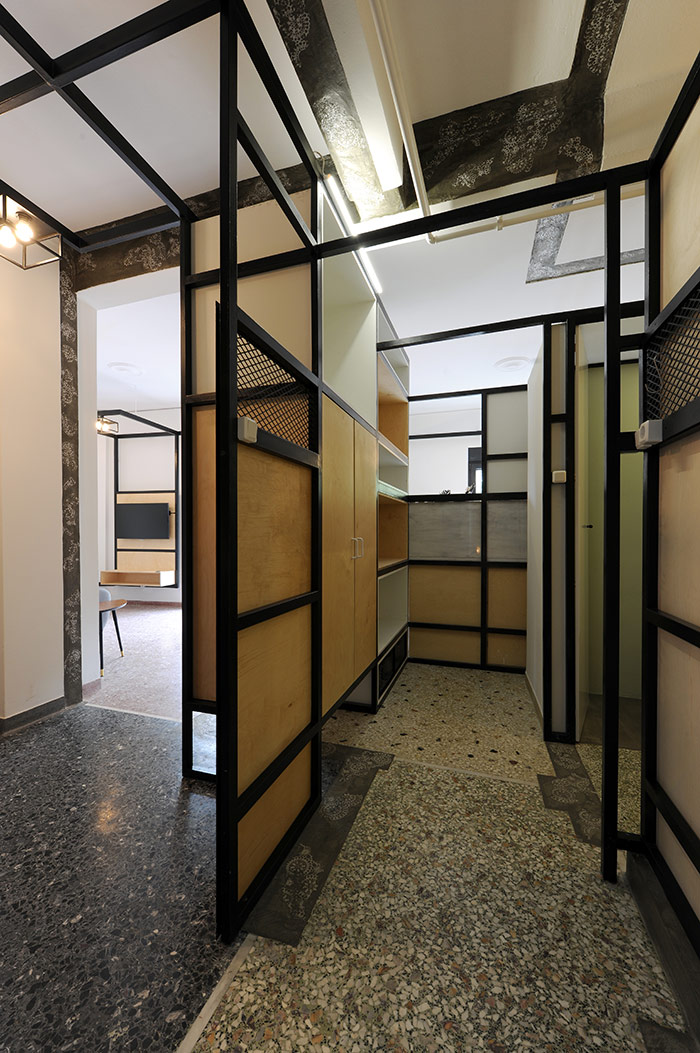 TOPOS 1 is a 60 sq.m. apartment in a 70s apartment building, located in Kerameikos, in Athens, on which the original intervention was meant to make it available for short-term rental.
The traces of the demolished walls have been left and incorporated so that the initial layout could be recognizable in an abstract manner.
Elements found in the apartment, such as old destroyed pieces of embroidery, a wall that still had clear marks from a fire were incorporated, in order to preserve a memory and to underline the succession of users. Energy-saving windows and door casings as well as an autonomous gas boiler have been installed.
Polytropo, the modular metal construction was placed gradually creating the dividers for the bathroom and the bedroom and was expanded to create infrastructure for the power supply network, as well as the beds, the storage areas, the kitchen and the audio-visual systems. 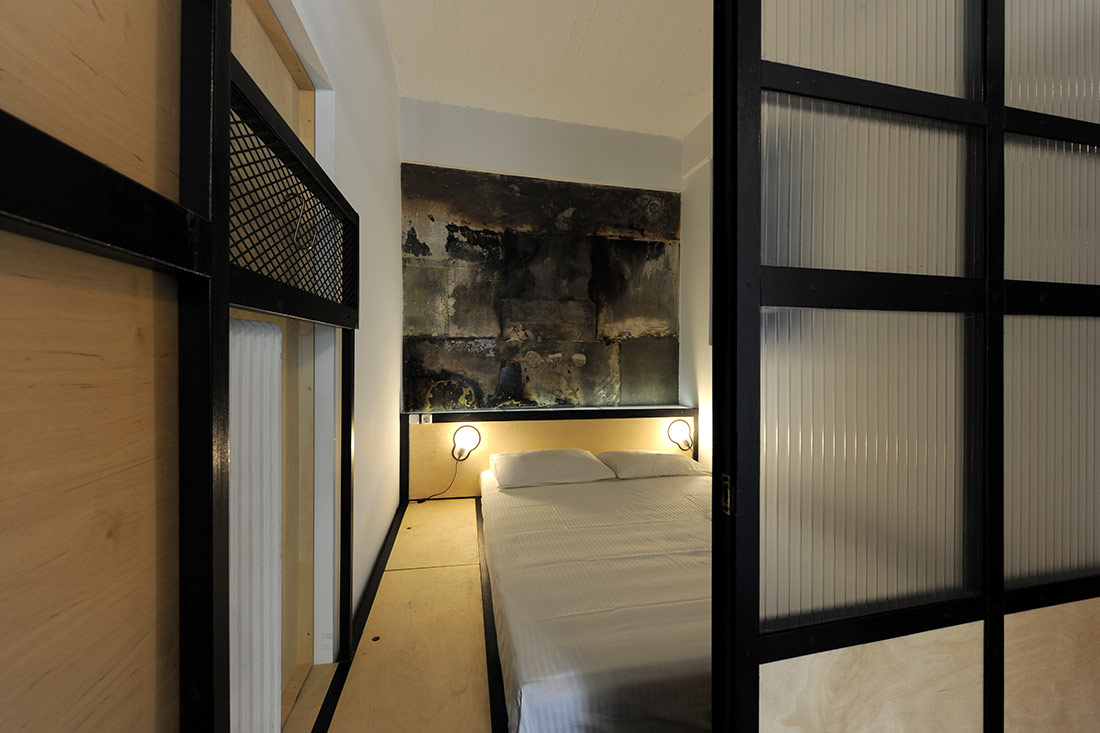 POLYTOPO is also an open invitation involving architects, owners, artists, photographers, journalists, construction companies, technical schools, students, so that we can all together revise the polykatoikia with a new gaze and redefine its future.