The Paracelsus Medical Private University (PMU) in Salzburg was founded in 2004. In 2017 the curriculum could be expanded to include the study of pharmacy. In order to provide space for the new students, a new institute and laboratory building had to be available in time for the summer semester 2018. As a result of the relocation of a printing plant on the property directly adjacent to the university, an ideal site was available for a new building. Berger+Parkkinen Architects were commissioned with the planning of the new building in January 2016. The property, which extends into the depths, connects Strubergasse with Wallnergasse, and thus reaches up to the elevated railway embankment. The volumetry of the structure represents a continuation of the north-south oriented volumes of the buildings on the public utility area, and also fits into the context in terms of scale. Thus, a coherent building structure was created across three development areas, beginning south of Maxglaner-Hauptstraße, via Strubergasse to Wallnergasse. The new urban body thus consolidated, with the new House D as the keystone, creates a connection along Gaswerkgasse to Mülln, where a recognizable connection between the old town and the fiefdom is established across the railway embankment. The deliberate staggered arrangement of the buildings results in different spatial sequences and views. Places, alleys, courtyards, places of movement and lingering are created. The consideration of this superordinate morphology aims at giving the entire area a uniform, individual, urban identity.
The concept of the laboratories and institute rooms was to be designed as a continuation of the institute building House C on the opposite side of the street, which was completed in 2013 and also planned by Berger+Parkkinen. The similarity of the typology of the laboratory and institute rooms is therefore not accidental. Similar to House C, the arrangement of the entire laboratory and ventilation technology was also planned in an attic floor reserved for this purpose. A particular challenge was the question of how the new building could interpret or accommodate the special feature of House C and the three sister buildings of the municipal utility area, the undulating mirrored soffits of the cantilevered structures. The answer was to adopt not the form but the concept. In the public utility area, the transparent plinth buildings contrast with the closed upper floors. The landscape and public space seem to penetrate the houses. This idea of a semi-public plinth floor is continued in the new House D with the urban typology of a large columned hall. An amphitheatre occupies the centre of this large hall. Surrounded by glass walls, it forms the transparent heart of the house. The massive arches and pillars span the entire ground floor, connecting the various areas of the auditorium, seminar rooms, foyer and staircases. The glass walls allow all parts to merge into an open room network.
Typologically, the ground floor resembles a three-aisled “basilica”, whereby the western row of columns does not stand under the façade, but indentedly follows the sloping line of the old basic boundary. Thus the entrance hall takes on a conical shape, with a series of different arches. The conical shape of the cantilever to the forecourt is also created. This small slant opens up the strict system of pillars, thus creating a formal connection to the architecture of House C. This dynamic is particularly emphasized by double-high arches in the area of the staircases, which make the transition from the plinth to the floors readable from the outside. The highest ecological principles were followed in the execution of the plaster facades, using traditional plastering techniques with multi-layer thick plaster on mineral wool insulation, with a high-quality waterglass-based paint finish. The slightly irregular structure resulting from the handicraft production, combined with the application of paint, gives the façade volume and an obvious similarity with the traditional house façades of the area.
Just as in house C, the two main staircases are of great importance. Especially the large staircase 1 is planned as a three-dimensional communication space. The clear structure of the building aims at a high level of sustainability, in that only the statically necessary structure is built unalterable, whereas all partition walls and room layouts are designed flexibly in order to be able to offer space for later changes of use. This principle was also followed in the planning of the laboratory and building technology. All laboratories are located on the upper floors. The laboratories determine the internal structure of the building with its functional, large wing depths. Lecture and practice rooms as well as offices for the scientific staff are located on the upper floors.

Landscape design
Based on the basic idea of a university campus, the aim is to develop a space situation as a central open space on Strubergasse around which the essential public functions of everyday university life such as Audi Max, library, etc. are grouped and via which the higher-level connecting paths lead through the area. The outdoor facilities are conceived as part of a uniform surface and open space design between the “Stadtwerk” Life Sciences Campus and the railway embankment and interweave the new area with the surrounding stock. Due to the narrow plot, long strips of grass flank the building. The forest garden to the south is based on the existing garden of the villa and forms a high and dense green conclusion of the PMU area opposite the elevated railway line. For this purpose, the existing tree population was thinned out and supplemented with deciduous shrubs, bushes, grasses and perennials. This creates an attractive spatial image for the lecture halls, which is staggered from low in the foreground to high around the villa. The garden and its wooden terrace will be a place of retreat, relaxation and communication for students and teachers alike.

Traffic
In the interest of traffic calming, a gradual redesign and reorganisation of Strubergasse is being sought. This is to be conceived as an “encounter zone”, i.e. a departure from the classic linear street space towards equal rights for all road users with traffic slowing measures such as green areas, one-way regulation and furnished zones. The management of public transport (bus lines) as well as the access to garages will be included in the development concept, existing road connections will be taken up and priority will be given to pedestrian permeability and the creation of new cycle connections. The approach for occasional deliveries will be via Wallnergasse, the departure via Strubergasse. 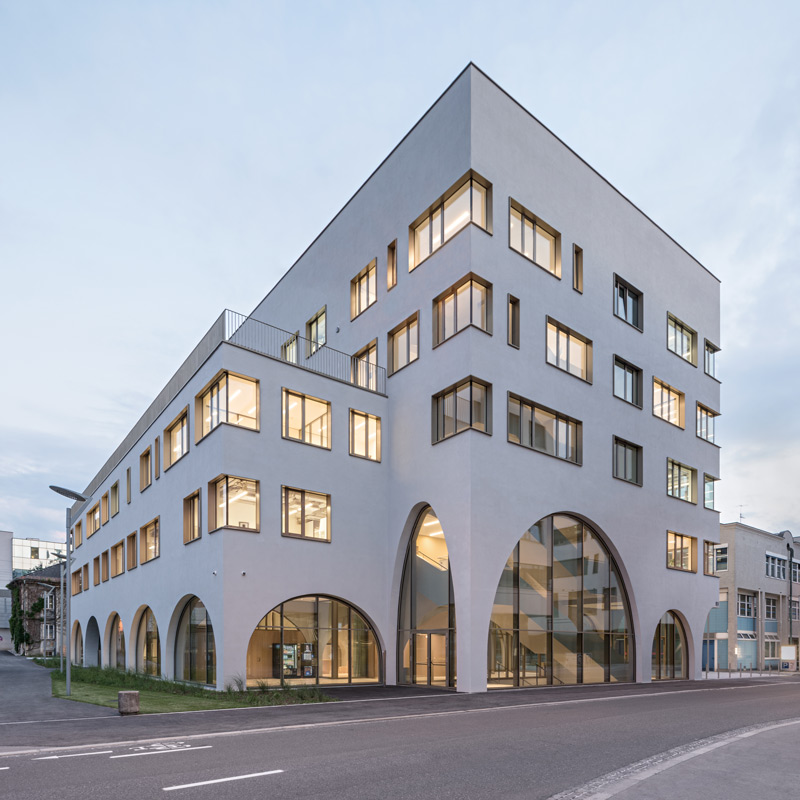 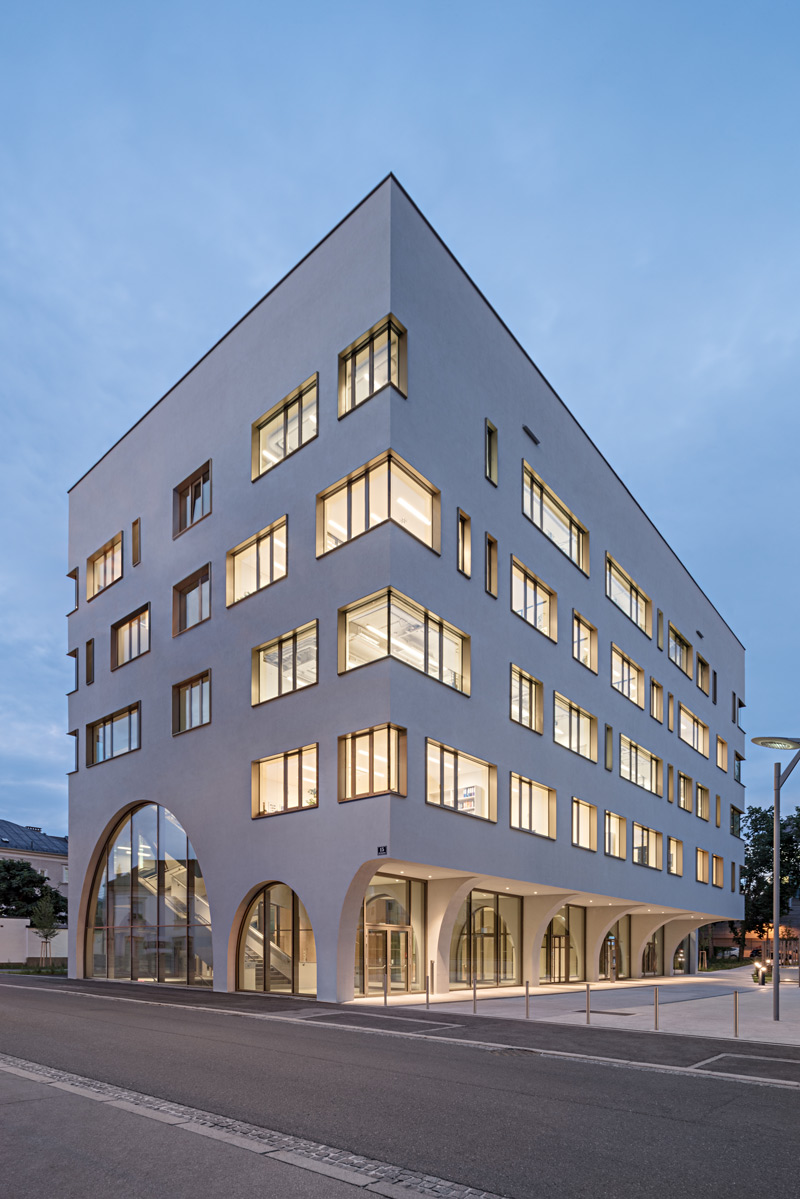 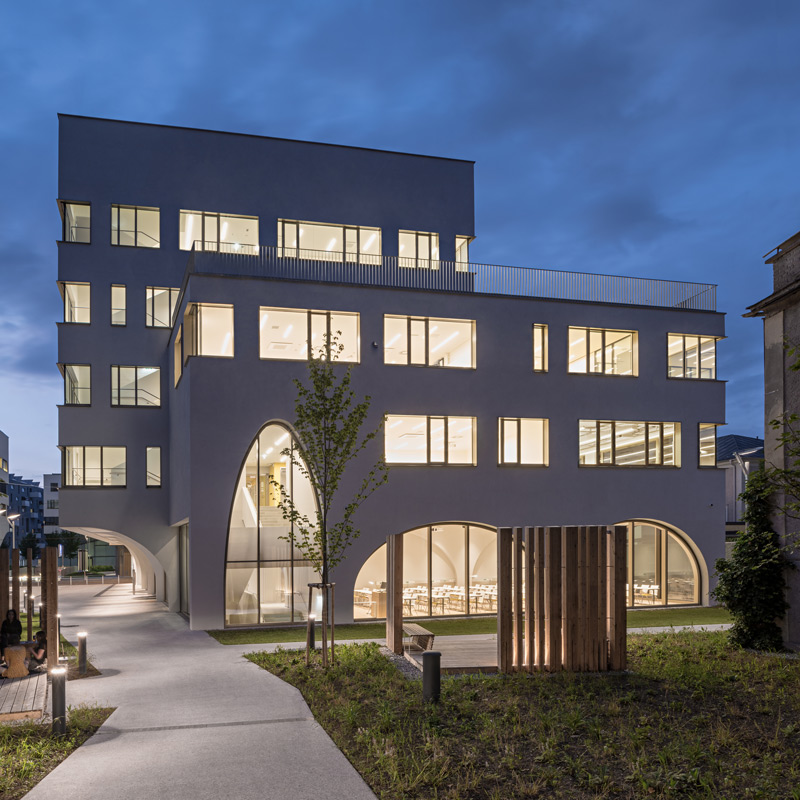 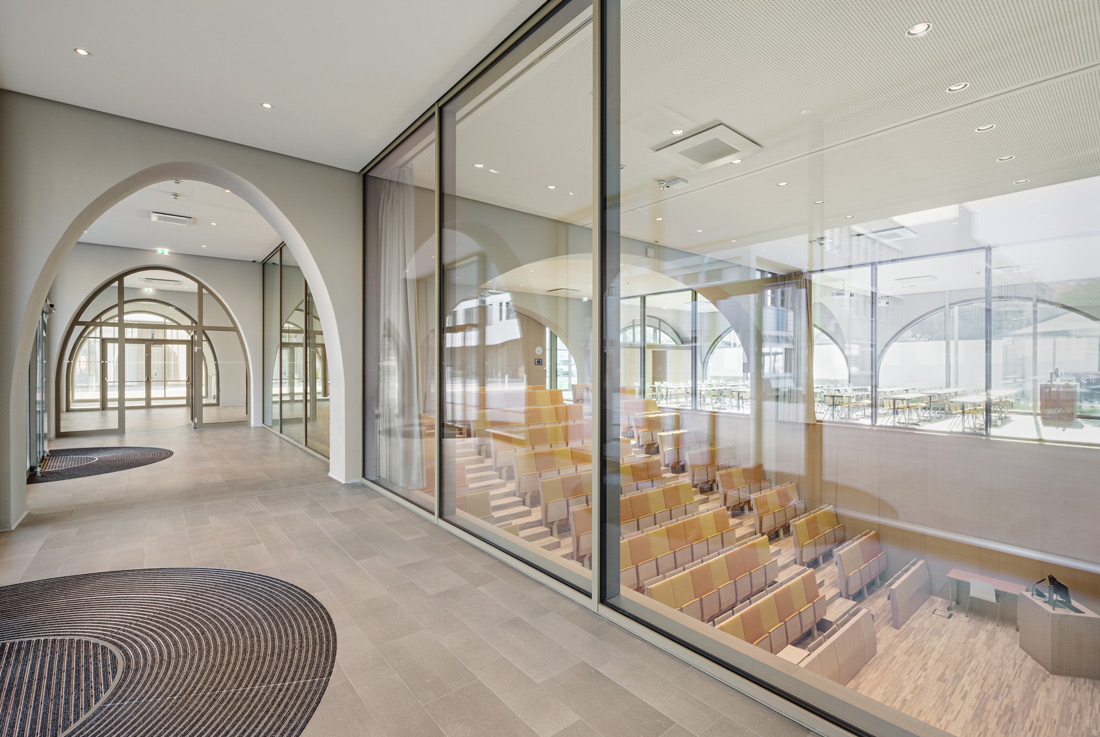 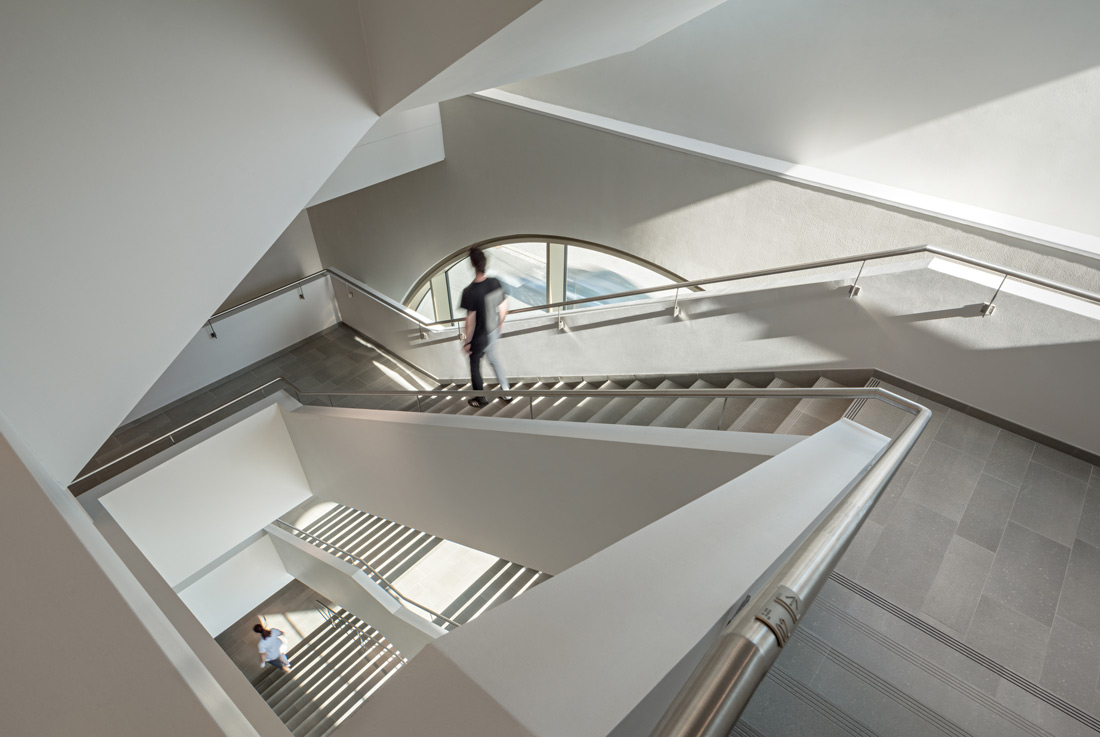 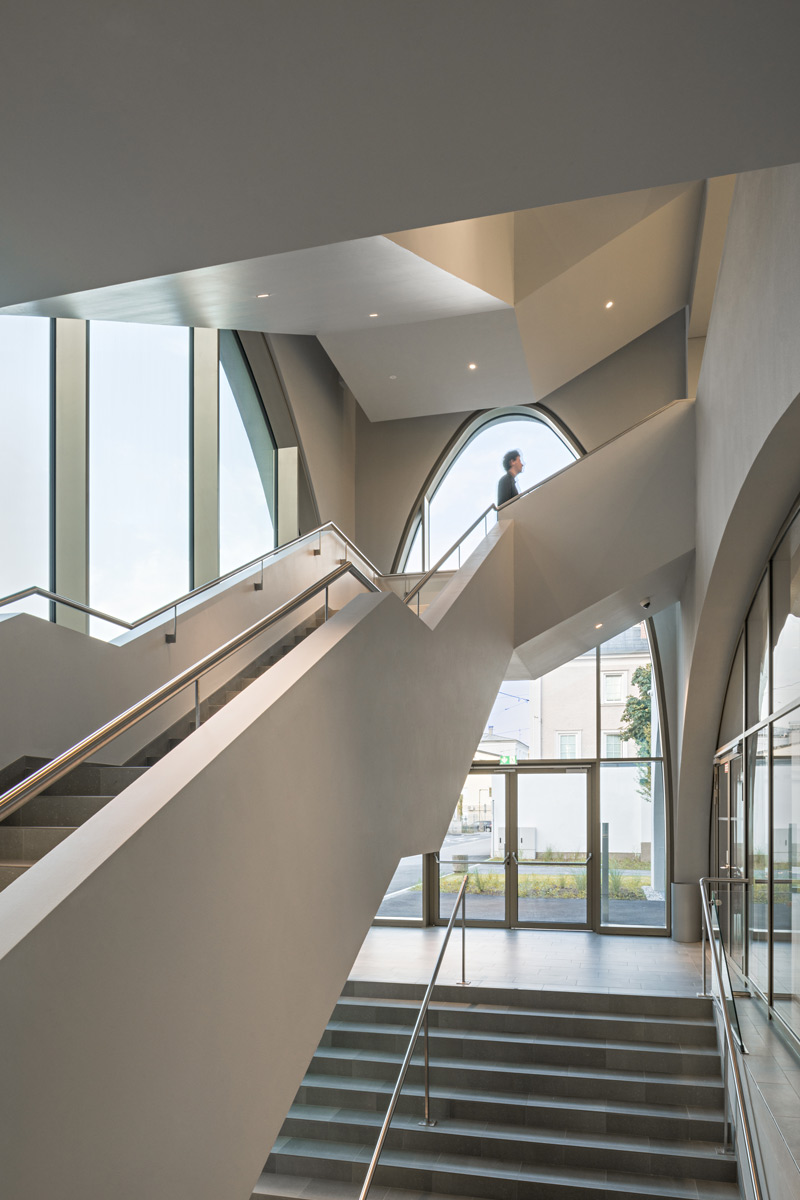 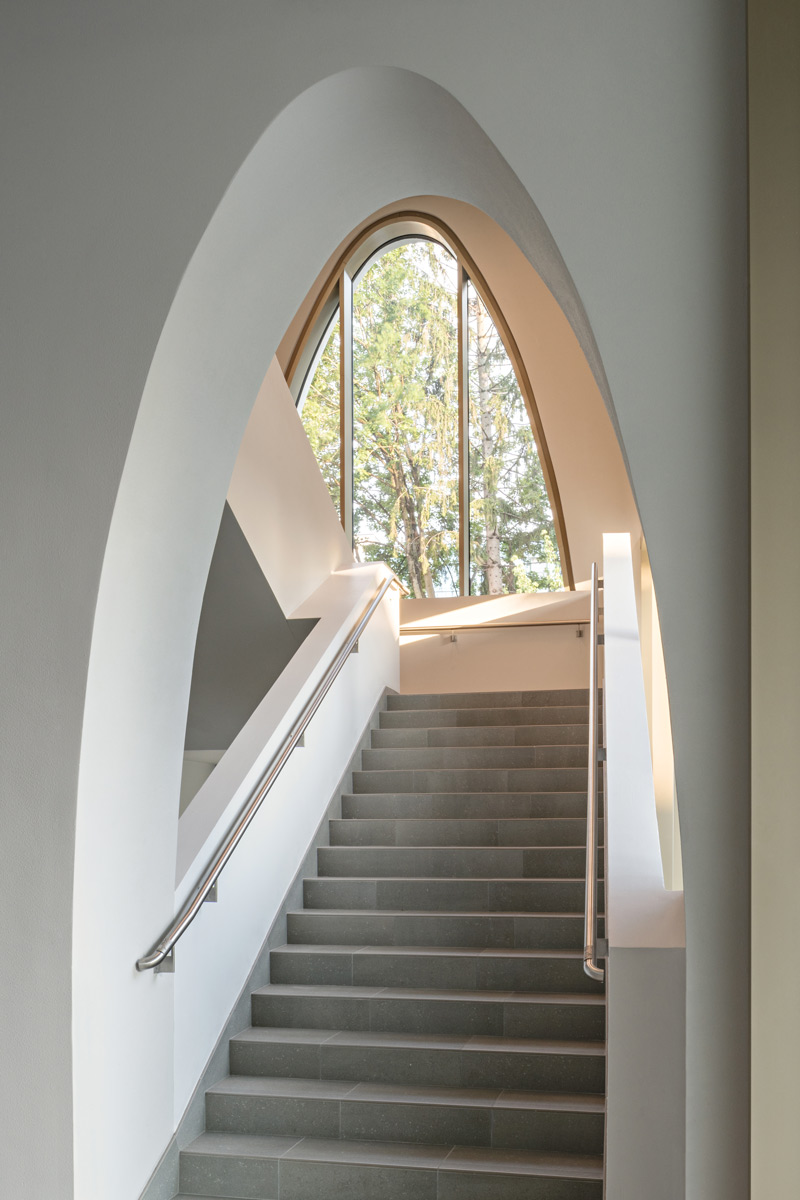 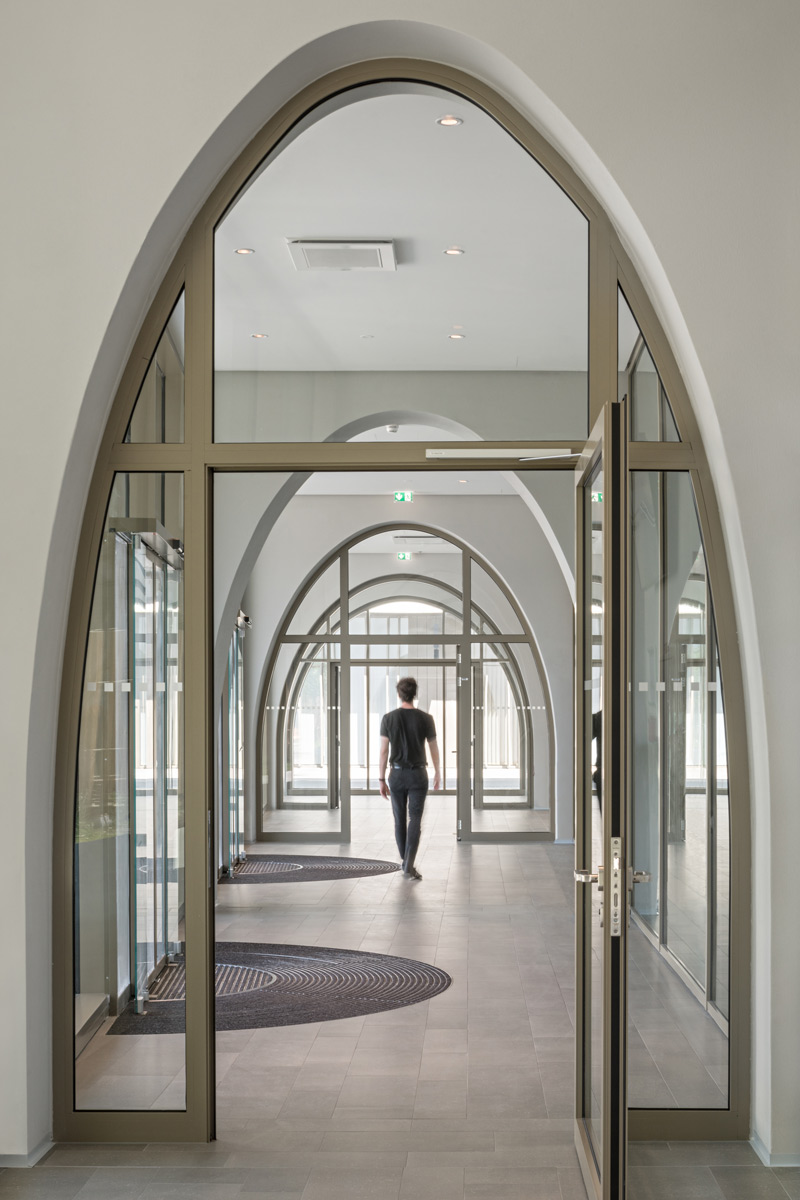 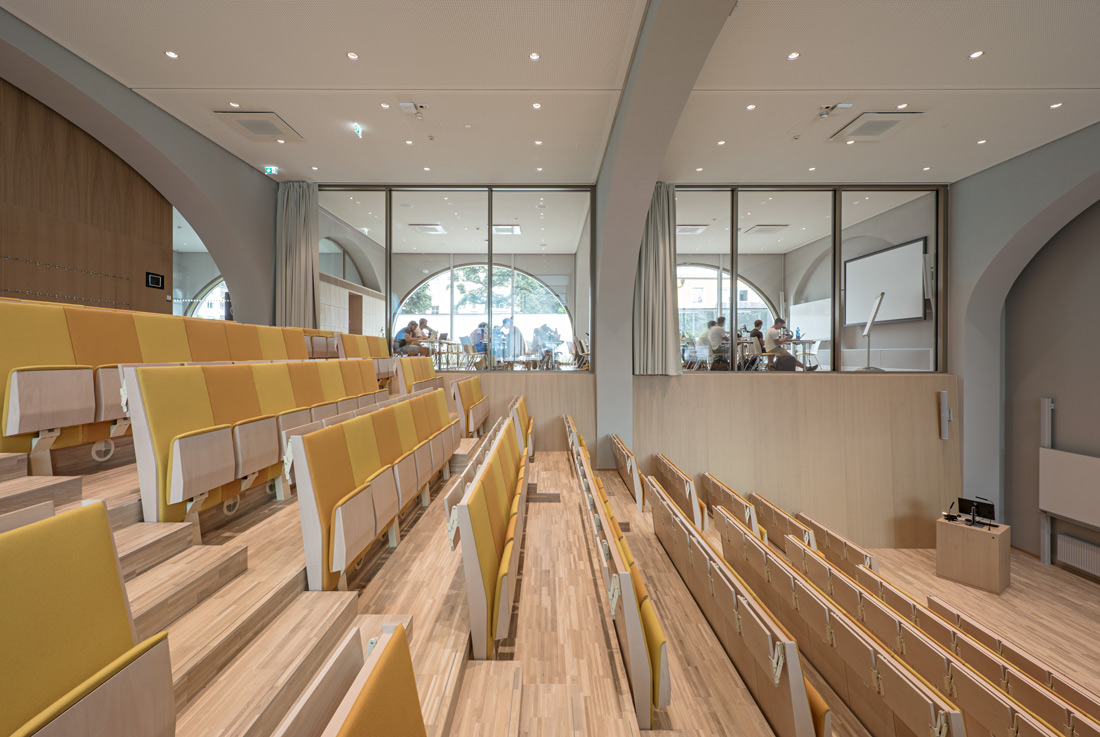