The building of the interwar Athenian period, listed as a modern monument, is located between Sintagma and the historic district of Plaka, Athens. It was built in 1922 by the Rallis family in order to host wealthy refugees from Anatolia and is part of a complex of two buildings that are inter-connected through a central atrium. For the conversion of the building into a hotel it was necessary to totally demolish and reorganise the interior of the building, keeping and restoring the facades, the bearing structure and the historical elements of the building. The 720sqm building comprises the new wing of in[n]Athens that was designed by STOA Studio Of Architecture and was constructed by Oikodynamiki in 2019.
The main goal of the design was to provide the new building with a unique and genuine aesthetic identity unleashed by contemporary architectural trends, while at the same time to respect and highlight the historic building. The main challenge was how to transform a listed building into a modern living organization, but also to relate it to the simple and ‘raw’ aesthetics of the initial wing of the hotel, which opened in 2015 inside the complex. With an occupancy rate of 92% and excellent reviews – ranking 4th out of 340 hotels in Athens according to TripAdvisor -, it is evident that the new in[n]Athens is an integral part of the traveller’s experience in the city of Athens, inviting the traveller to participate in the historical and architectural environment of the city, while understanding Athens’ contemporary dynamics.
The 16 new rooms are characterized by a common aesthetic approach but differ in size and functional organization – serving the functional requirement for the existence of rooms with different capacities and adapting the irregular shape of the plan of the historic building that does not allow repetition. The simple strict geometries, the use of natural local materials and the ingenuity of the architectural solutions derive from the notions of Greece, history and original creativity. Raw marble and black iron elements are projected on the white background of the walls. In parallel, the space feels warm with the use of wood and perforated oxidized iron sheets. The folds of the eclecticism facade of the building are turned into combed face concrete on the walls of the bedrooms, while the luminaires and the bedside tables made of black iron tubes are a modern reference to the Art Deco elements of the building. Bathroom are organized in three parts, with the central part being an extension of the main room and being separated by sliding oxidized perforated iron panels that are characterized by translucency and offer a dramatic effect.
Shared spaces are designed so that they maintain the character of the historic building, which retains its exterior glamor. Elements such as the gypsum decoration of the ceilings, the staircases and the tall wooden doors of the interior patio were preserved and highlighted. The general floor plan is organized around the core of a pre-existing interior patio that was redesigned in order to host a small indoor garden. The height of the patio was highlighted by the design of a double-height metal construction for climbing plants – art deco reference. The preserved staircase remained untouched and was highlighted only by the use of linear perimetrical lighting. At the ground floor entrance of the staircase, a lighting structure made of oxidized perforated iron panels was designed, achieving the use of common architectural vocabulary between the rooms and common spaces. This structure, with its simple geometries and rough texture, contrasts sharply and, thus, highlights the historic staircase. At the same time, it frames the entrance when the visitor enters the building.
STOA Studio Of Architecture designed all of the hotel’s custom-made fixed and mobile equipment implementing inventive solutions that achieve comfort and multifunctionality and save space in the rooms.

What makes this project one-of-a-kind is that it became an urban epicenter. Through its aesthetic identity it is now one of these important landmarks, which connect the past with the future of the city and, thus, its visitors with the Athenian history, society and creativity. 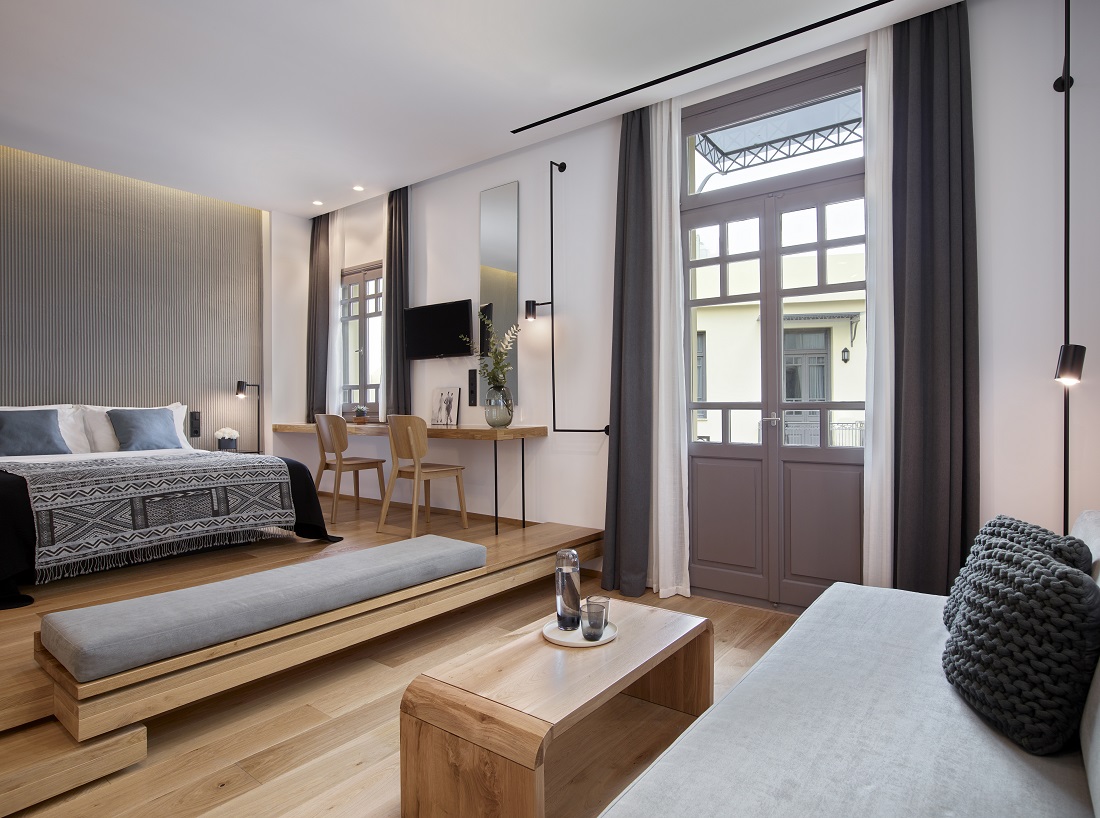 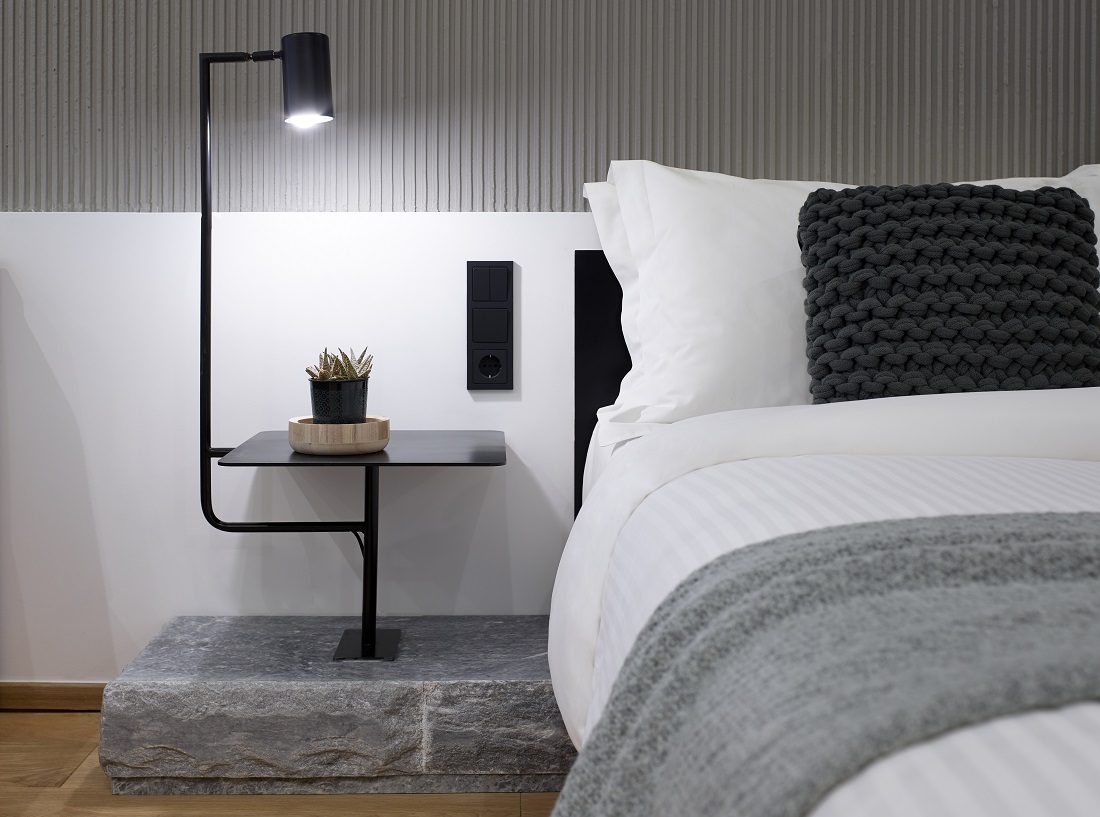 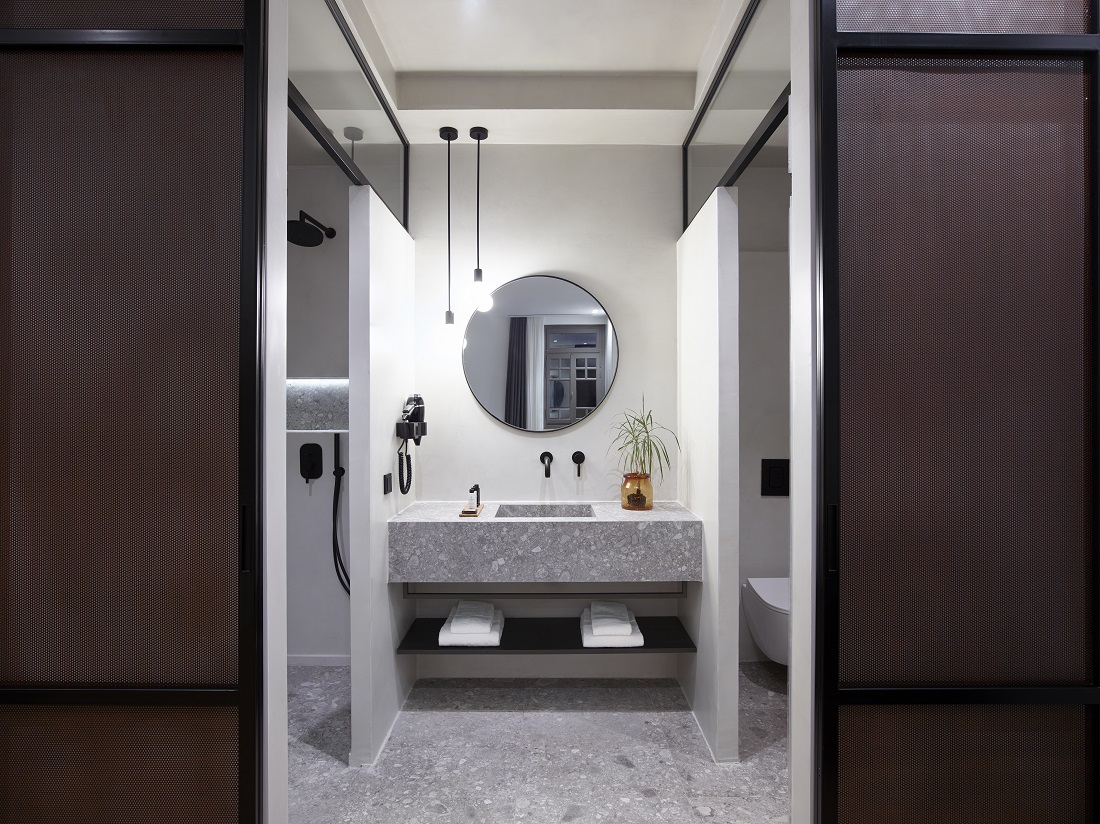 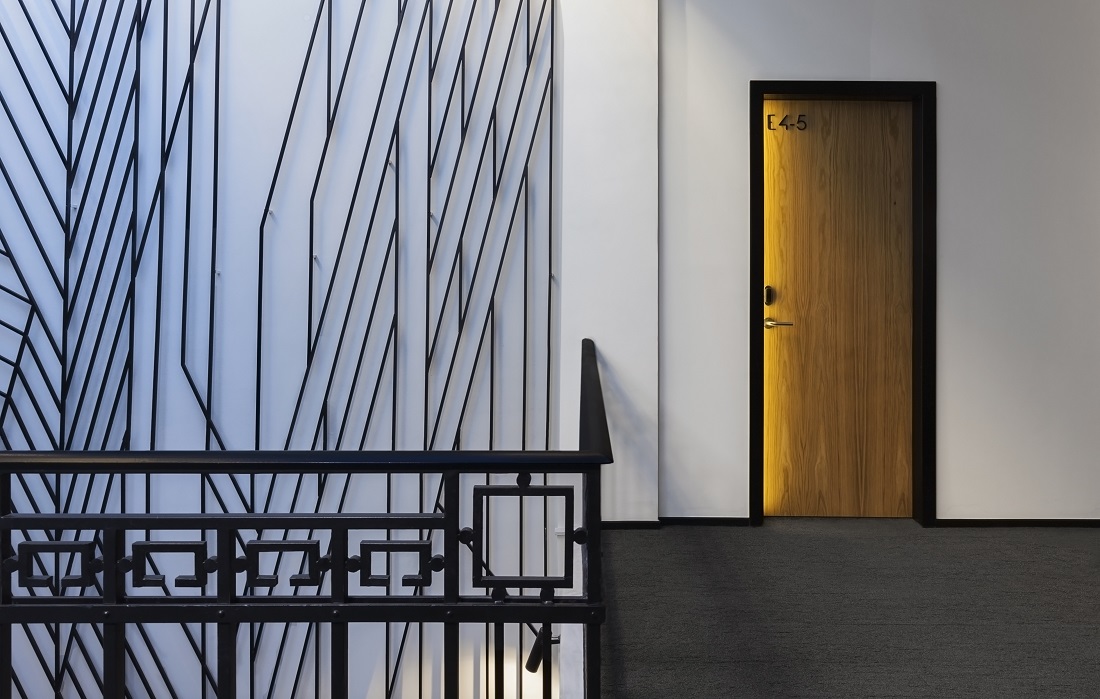 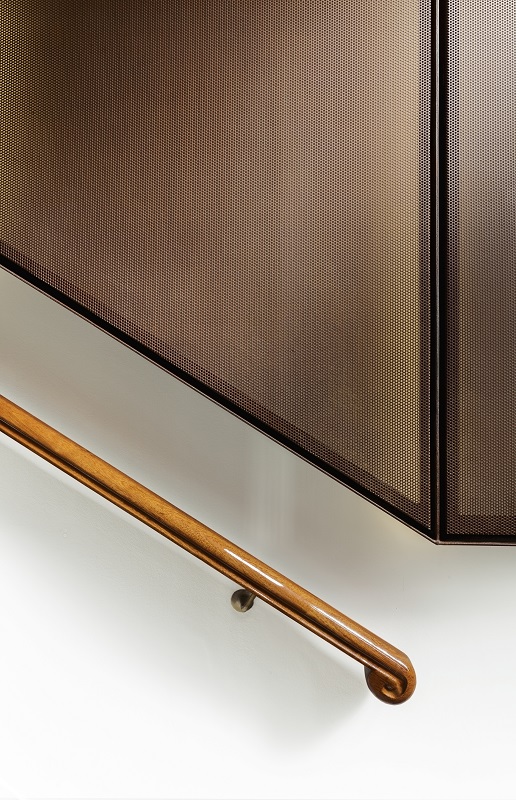 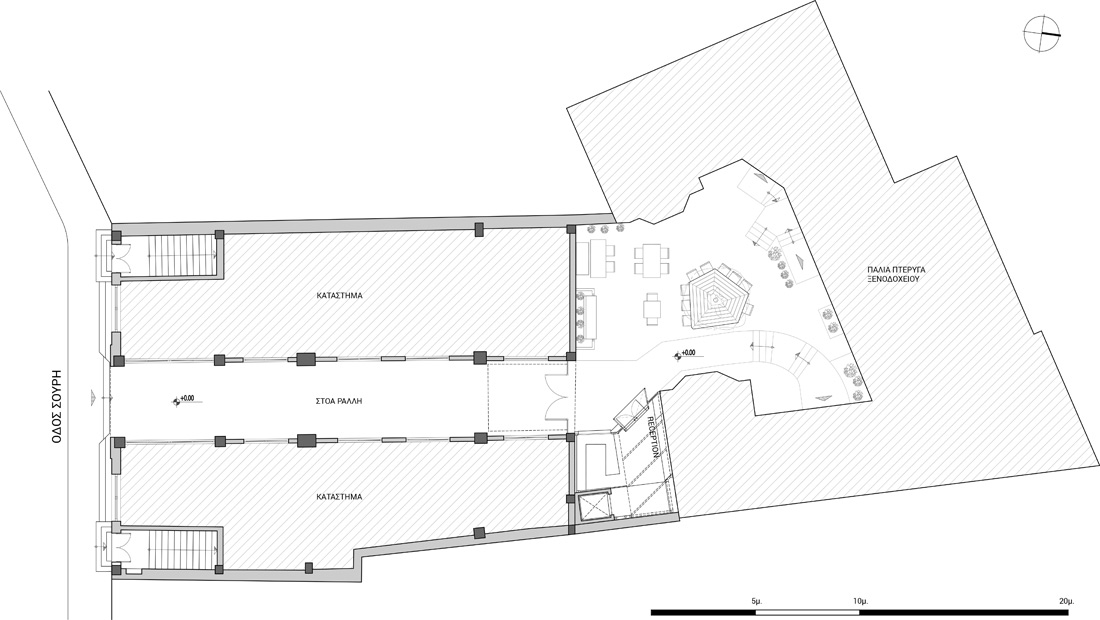 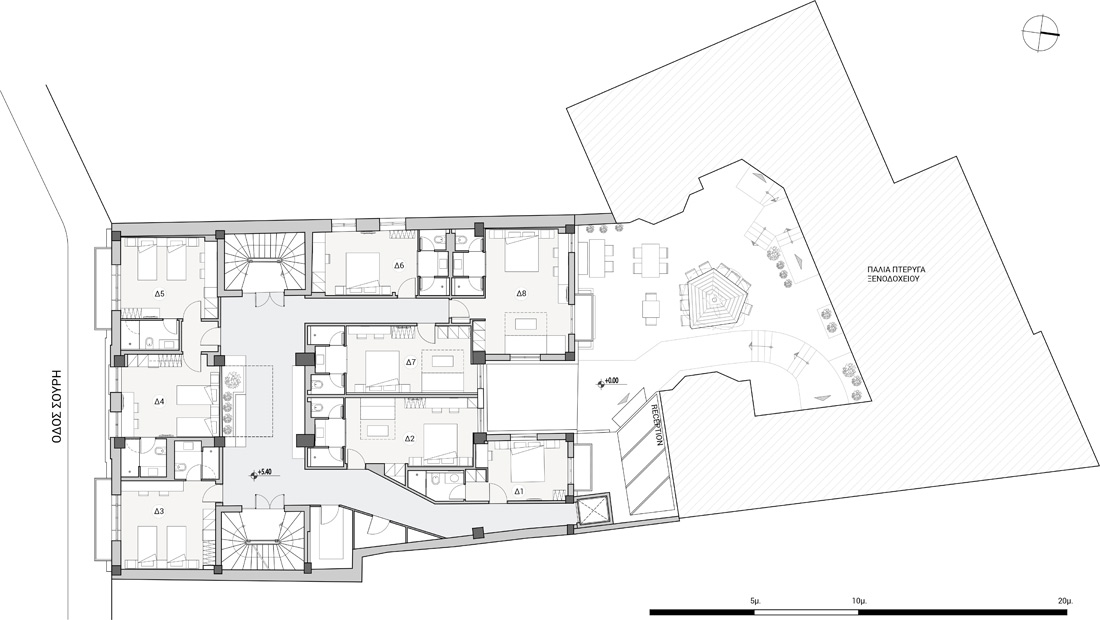