Our task was to remodel this ugly, badly built catalogue house into a dwelling that would fit in with the village architecture of the birthplace of one of the best known Czech painter and illustrators, Josef Lada, the legendary chronicler of Czech village life of olden days. Luckily we were allowed to rip it all out and start (almost) anew. The outside look is modern, functional, logical but respectful of the vernacular which – by the way – is nothing but that, anyway. It was a job of straightening and simplifying, using local materials, bringing the light and air in and adding a few clever details. The result is fresh and cheerful, just like most of Lada’s work.

The current owners chose to buy this new but yet uninhabited house in Hrusice, both with regard to a pleasant location and also to avoid the time-consuming construction of the new house. They bought a catalog house near the village square, planned to make minor ad-justments to the terrain and interior, and so they ask architects from Atelier SAD for advice and help. At first glance, the house showed signs of non-conception, the layout of the interi-or was quite illogical. Artificially piled soil formed a steep slope and was preventing entry into the garage. French windows from the main living room ended half a meter above the garden level. The facade was disturbed by niches and columns. Above all, there was a strange, incomprehensibly intricately ragged roof. House was by its appearance disrupting the original character of the village. It was finally decided to completely rebuild the house just to naturally fit into the surroundings. Following the folk architecture, the main concept of the reconstruction was simplicity of the building. Josef Lada’s paintings show houses with wood-en gables, simple ground plan, thatched or red gabled roofs. Folk architecture has always been without aesthetic elements that would be beyond the functional requirement. As in our case, local sources were used for the construction. Atelier SAD ensured the reconstruction through its own construction company MY76. The close cooperation between the design and realisation team proved to be necessary and also extremely successful. Originally used ma-terial was of poor quality and it was not possible to reuse it despite the previous plan and maximum effort. The construction was spontaneous, and the plans were changed several times during the process.The formerly complicated floor plan of the house is now T-shaped. The garage has been converted into a relaxation room with sauna. Cars are now parked next to the house on a roofed parking lot, which has been sunk into the terrain and naturally connects the house or its lower technical floor, with the street. Newly was created eleveted paved corner. This corner gradually decreases along the perimeter of the house so that it does not act as an impenetrable wall, but only fulfills the function of strengthening the terrain where it was needed. It will soon grow green and become home to insects and small ani-mals. The same stone from local sources as at the corner was used for paving of covered parking space and sidewalks around the house.
The house is newly walled, thanks to construction work it has obtained the desired simple shape. A two-layer terrazzo was chosen as a paraphrase of the traditional plaster. Extremely hard and durable material lasts unchanged for a long time. Almost in the final phase of the reconstruction was transformed the roof from a complicated one to a single-pitched gable roof. A traditional gable was created on the upper part of the facade. For the most part, the space behind it is glazed. In front of the window are larch lamellas, which appear from the side of the facade as a wooden paneling of the shield. However, it does not hinder the view of the surroundings from the attic room. Under the roof, where in the original country houses was stored hay, habitable rooms have now been created. The profil of the wooden slats are repeated also in the new fencing and in the roofing of the pergola. The large living room is partially separated from the kitchen and dining room, but the space is easy to pass, it appear airy and open. The floors in living room are oak or travertine, on the technical floor there is a concrete floor. Where the oak floor meets travertine, the drawing of these two materials follows. Travertine can also be found in the bathroom. It goes smoothly from floor to the wall and up to the ceiling. The dominant element of the ground floor is an kitchen island. Artistic object from four hundred years old oak wood, in which was placed glass-ceramic cooking plate with built-in fume hood. This sculptural element weighing 800kg was created by Martin Papcún from oak wood recycled from demolition. Kitchen is designed from handle-less cabinets and drawers. Behind some doors are hidden original supporting columns, behind the largest one is a chamber. The kitchen has a minimalist look, but it has a full function. A small design element is the brass straps at the foot of the cabinets, which create the desired contrast with the white cabinet surface. It is a detail that brings life to the room. The fireplace, another significant part of the interior, is built into the black terrazzo wall in the living room and is double-sided. This complete reconstruction perfectly reflects the style of work and the overall concept of
Atelier SAD. Their work requires maximum communication with the client during the initial phase of the project and throughout the realisation. Furthermore, emphasis on the choice of material that meets the requirements for quality, sustainability, function and design, and a special attention they pay to details. It is a modern house that meets the expectations of luxury living in the countryside. At the same time its appearance refers to the original folk
architecture and does not stand out from the original development. Thanks to the energy invested in the initial phase of the project, thanks to the efforts and abilities of the MY76 realization company, and mainly thanks to the openness of the client, the house was created exactly to meet the needs and ideas of its current residents. 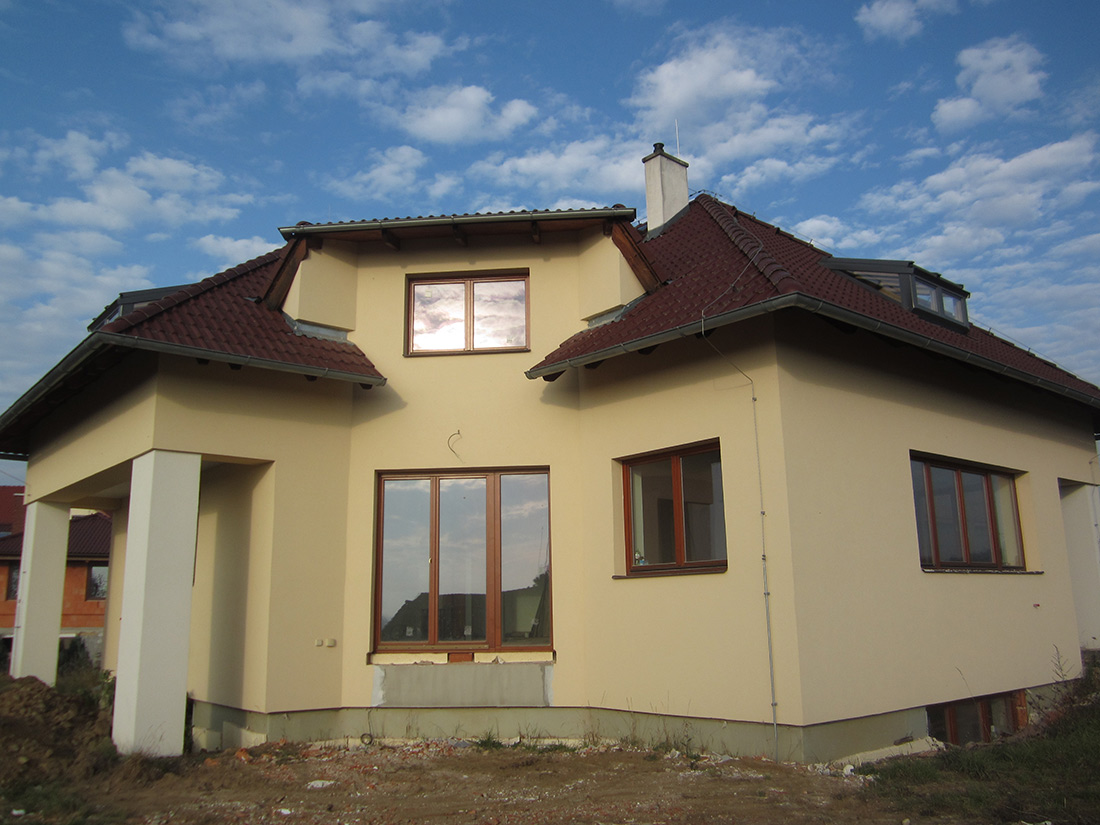 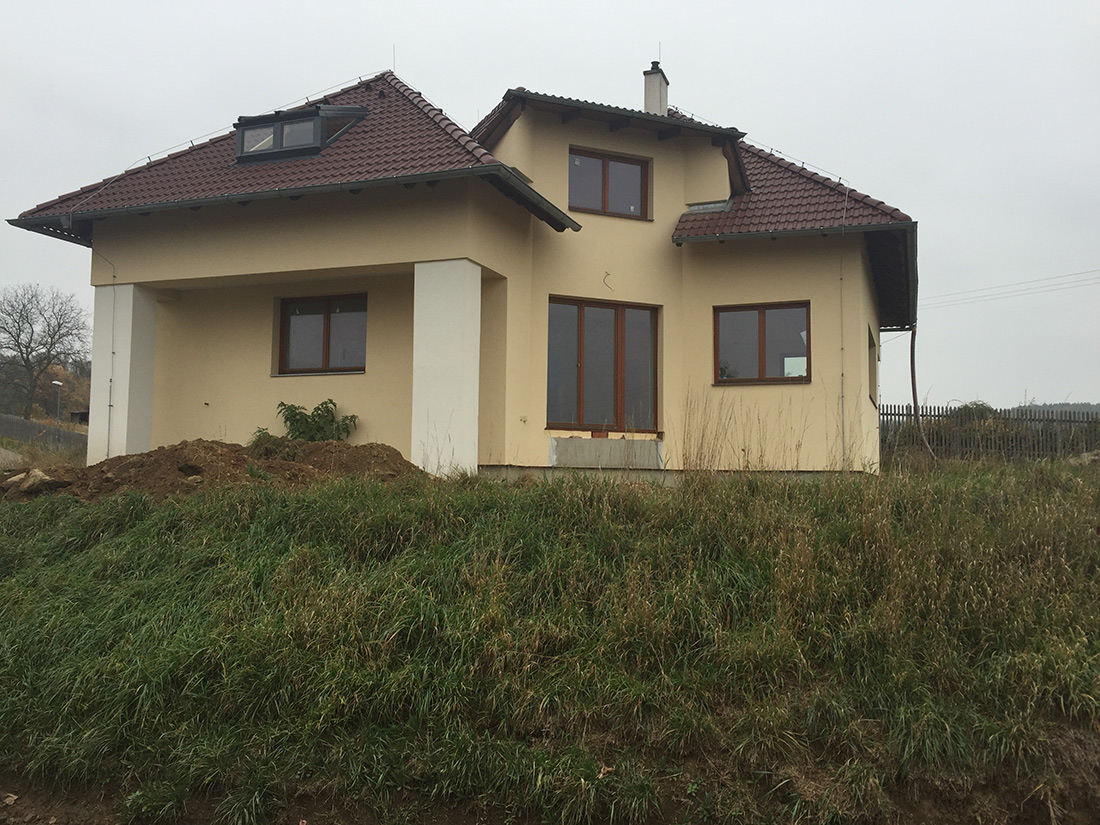 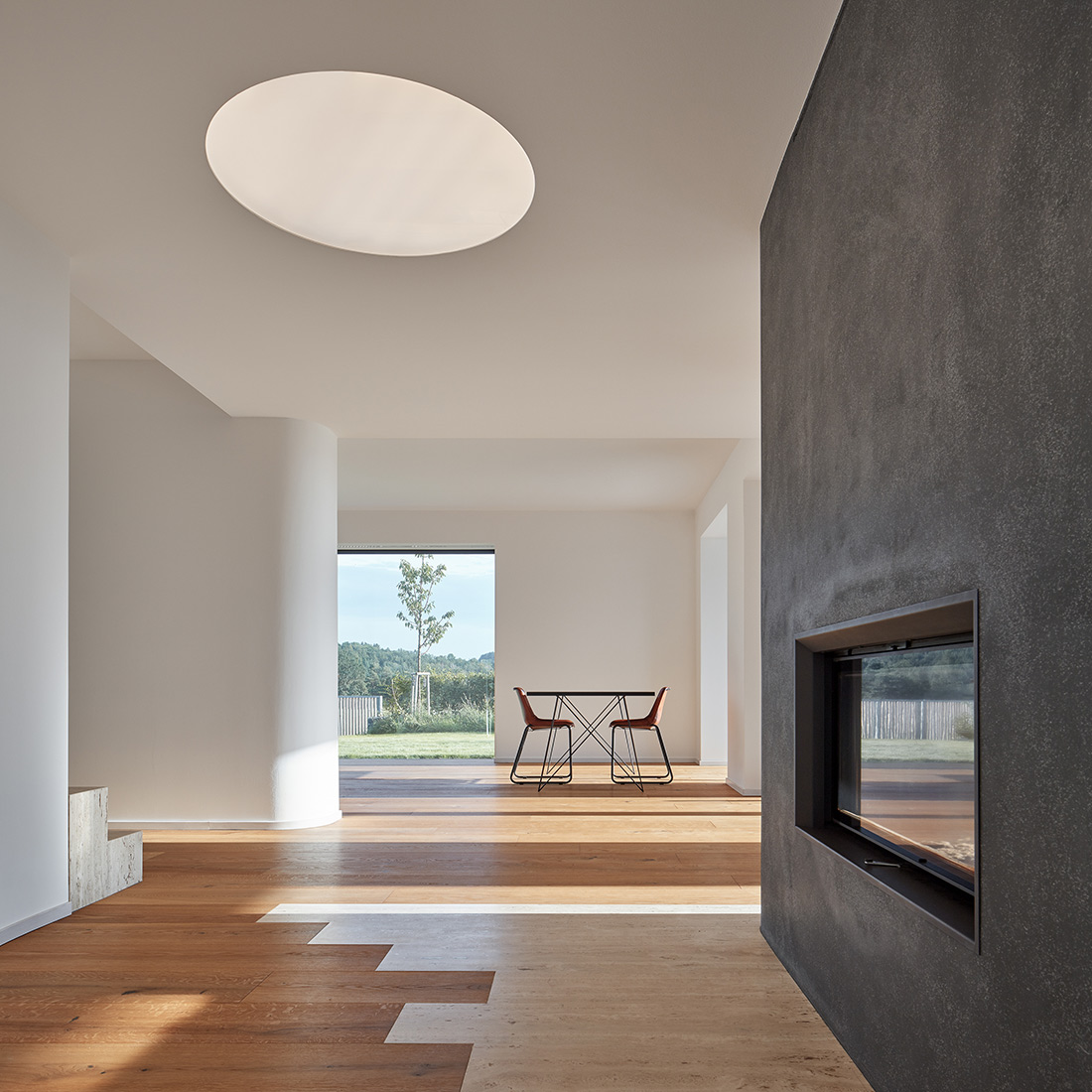 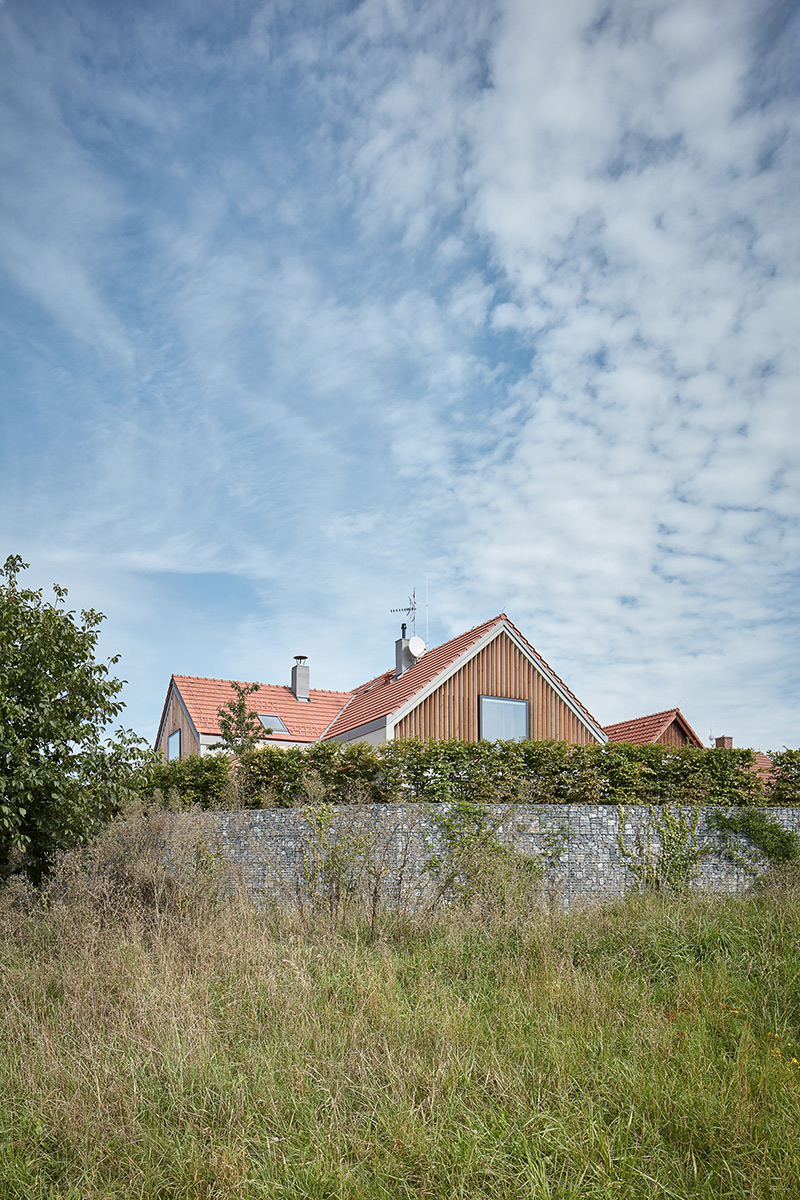 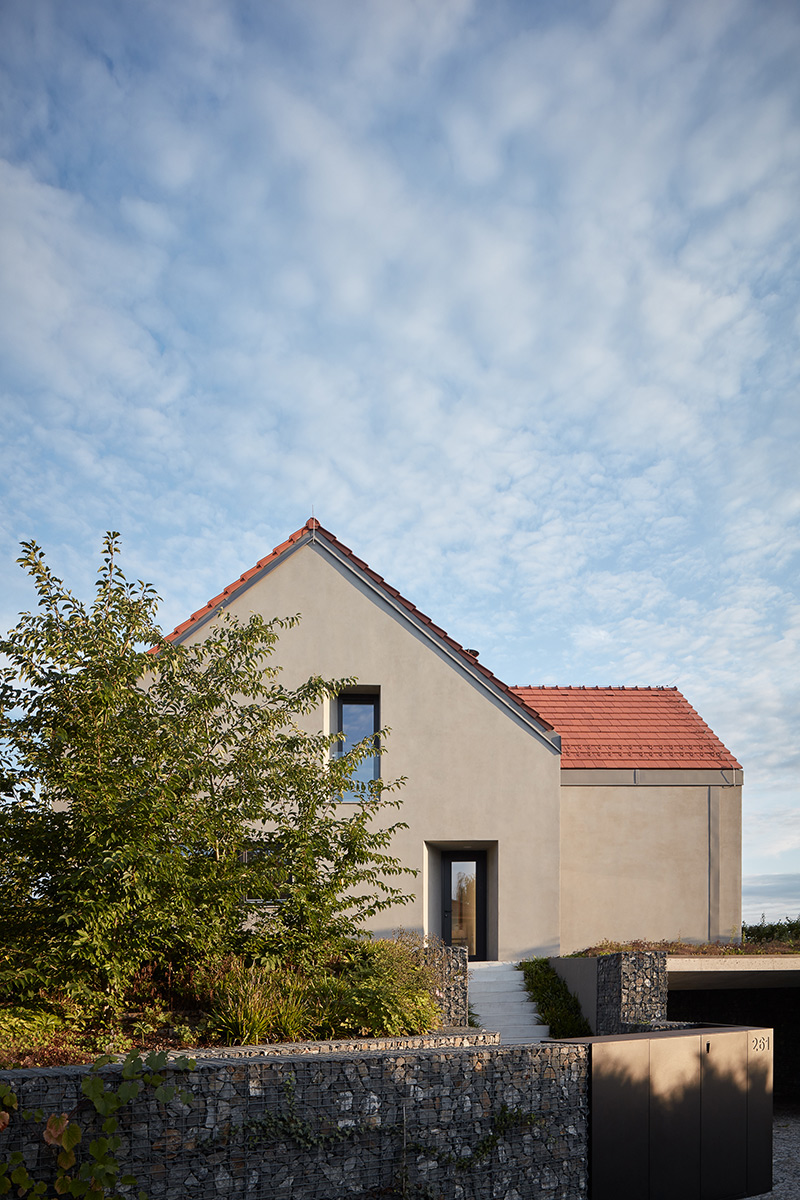 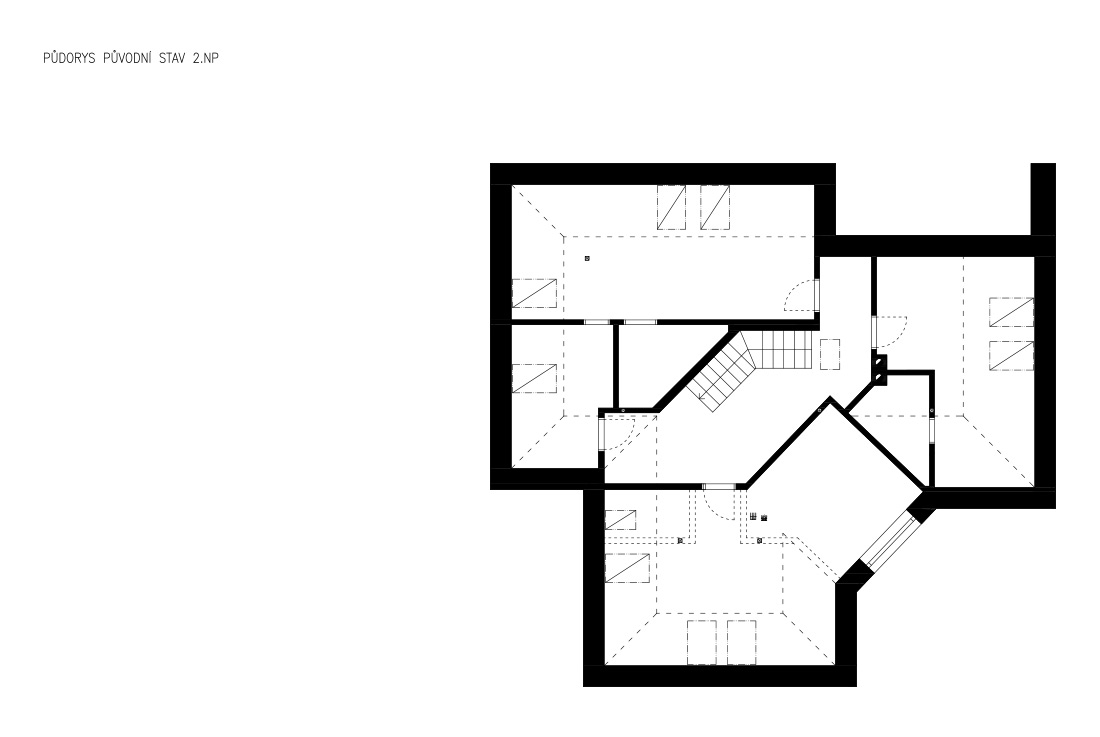 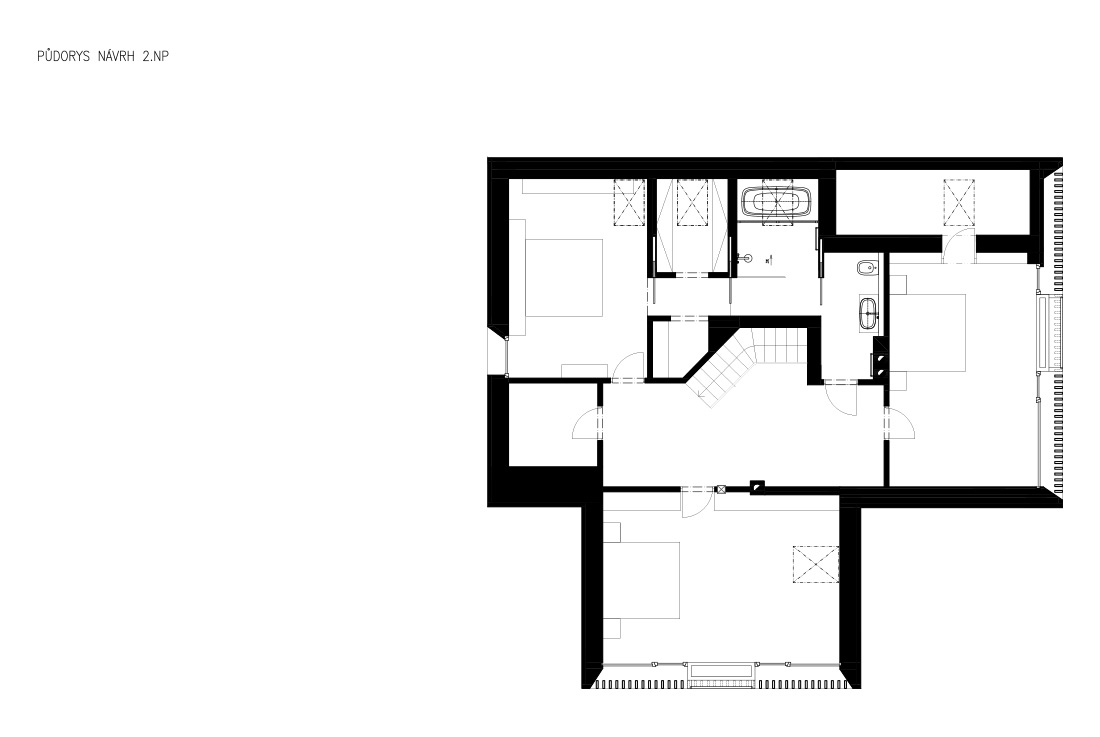 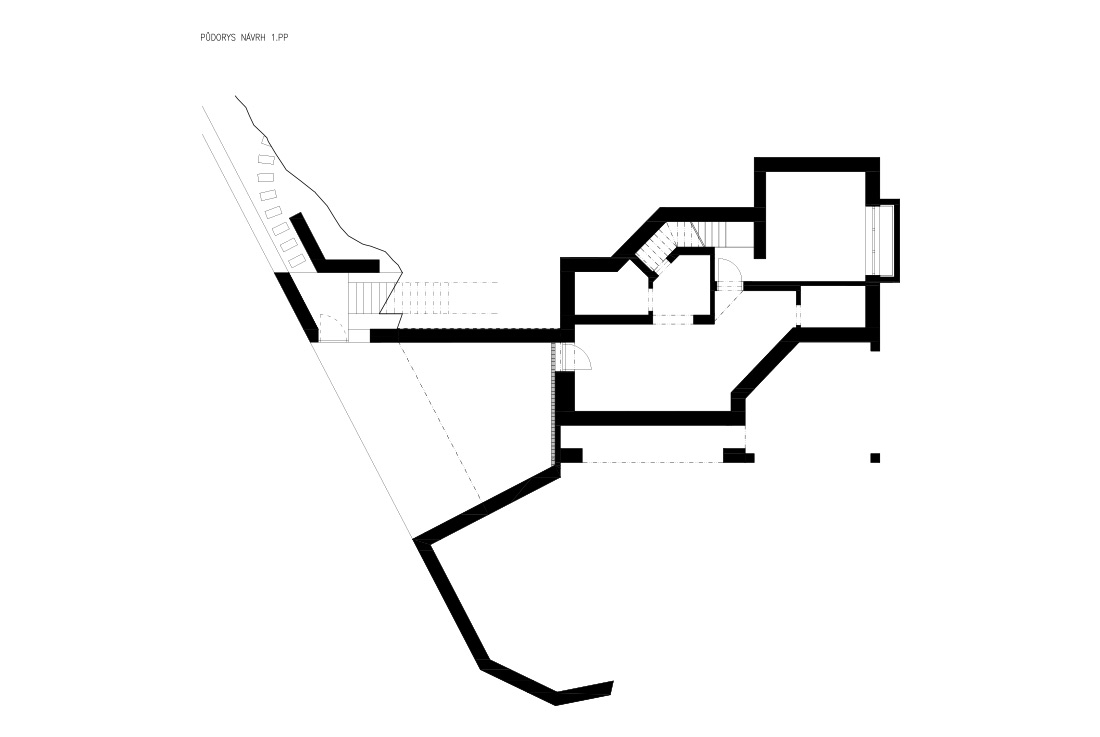 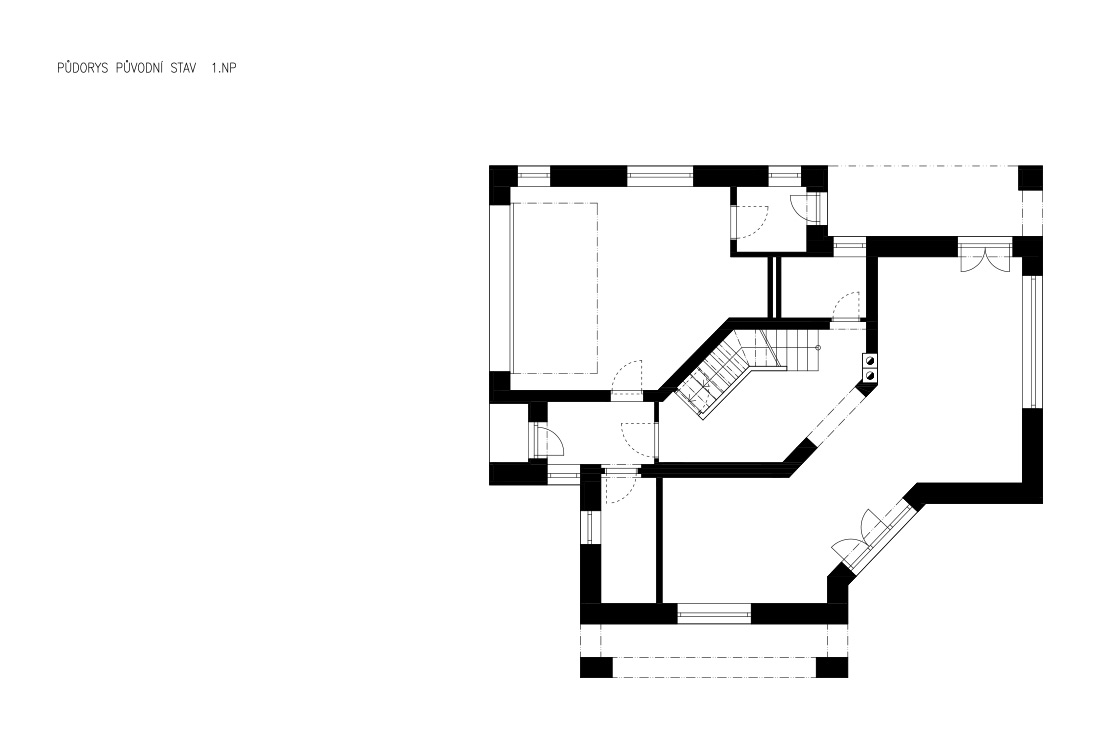