House by the forest, Petřikov

The family house in Petřikov was designed for a young four-member family. The owners addressed us with a simple assignment: to come up with a design of the house. They gave us the regulations from the local municipality office, and left the rest us. They told us that they are going to sell their apartment in Prague and that they are going to use the proceeds from that sales, along with a small mortgage, to fund the construction of the new home. It was clear that we were hired from the beginning not only as architects, but also as family budget counselors, as none of the investors was from the industry. In addition, the mother was on maternity leave, she was taking care of two young children and the whole family budget was provided by her husband. A situation known to many.
Unlike a conventional new houses build in the satellite areas of big cities, where a large family home is built on a small 500 to 600 m2 plot (often with twice the permissible build-up space), we agreed with the investors that in this case it is necessary to invest in the space. Not the interior space, but space for life and privacy. Thanks to mutual trust and good communication, the proposal was created without any unnecessary additions and within limited budget. The house occupies only ten per cent of the area of the 2000 m2 plot. The total usable area of the house is 223 m2, including garage and technical rooms. The family house has a garage for only one car, which no matter how big, almost always ends up as a warehouse (which has also been confirmed in this case). The house does not have a swimming pool, garden alcove or summer kitchen. The size of the openings on the facade were designed so that, in case of financial deficiency, they will be filled with plastic windows without dividers, thereby maintaining the visual intent. Fortunately, this did not happen and aluminum windows were installed.
The cooperation with the investor began even before they purchased the land. We visited the land together and, after mutual agreement, the buyer bought it. The advantage of the plot is that it is located at the end of the village, it has neighbors from only two sides and the other two sides border with forest and free landscape. The house itself is situated in the northeast part of the property. It maintains the necessary distance from the north and from the street. The rest of the southwestern part of the plot is intended for the life of the family. The land flows continuously into the woods and landscapes where wild animals move freely. This was crucial when creating the concept. The house is closed from the side of the neighbors and opens up to the southwest, making it part of the nature. This feeling is perceptible from every room in the house, in any hour of the day or night.
The functional division of the house is very common. On the ground floor there is a kitchen, dining room, living room and the technical part of the house. The common space is dominated by a “picture” in form of solid glazing that frames the surrounding landscape, which varies according to the season. On the first floor there are four bedrooms and two bathrooms. These two zones vary with both the shape and the material used – the rectangular ground floor is defined by architectural concrete. The reinforced concrete wall, in addition to its supporting function, serves as a screen that covers cars parked in front of the garage and the disorder that often arises in front of it. A backlit bench protruding from the wall is leading to the main entrance of the house. The first floor of the house is placed on a concrete cuboid. The brick tilling of the facade and the sloping, aluminum roof clearly distinguish it with the materials used in it. Emphasis was placed on non-maintenance of the house – therefore, durable materials were added to the facades and roofs to complement the aluminum windows and concrete pavements around the house.
We visited the family house a year after it was occupied. We were very pleased when the owner said with a smile that she and her family felt great in the house. So far they have found nothing in the design of the house that they would not like.

What makes this project one-of-a-kind?
Housing near Prague, yet in direct contact with the landscape. The context and the relationship to the surroundings are decisive. The first floor construction with brick tilling similar to the archetype of the country house, is placed on a concrete base that is unilaterally opened to the view. Reliable materials are a prerequisite for long-term life and dignified aging in the natural context of the site. 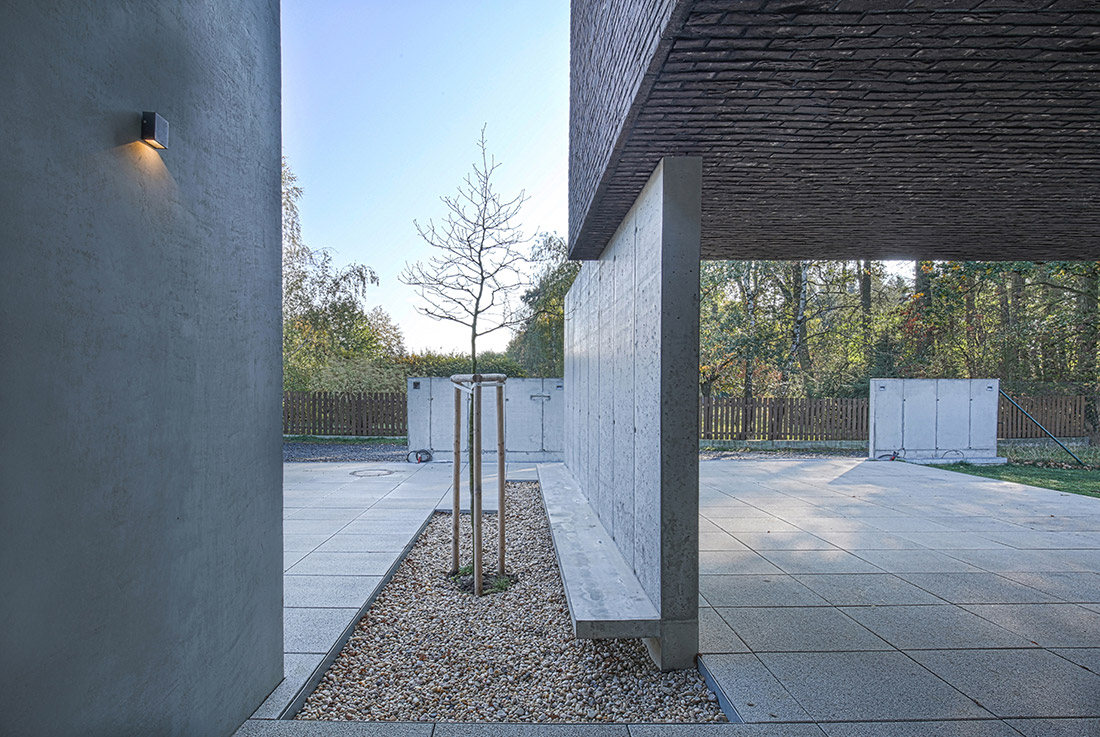 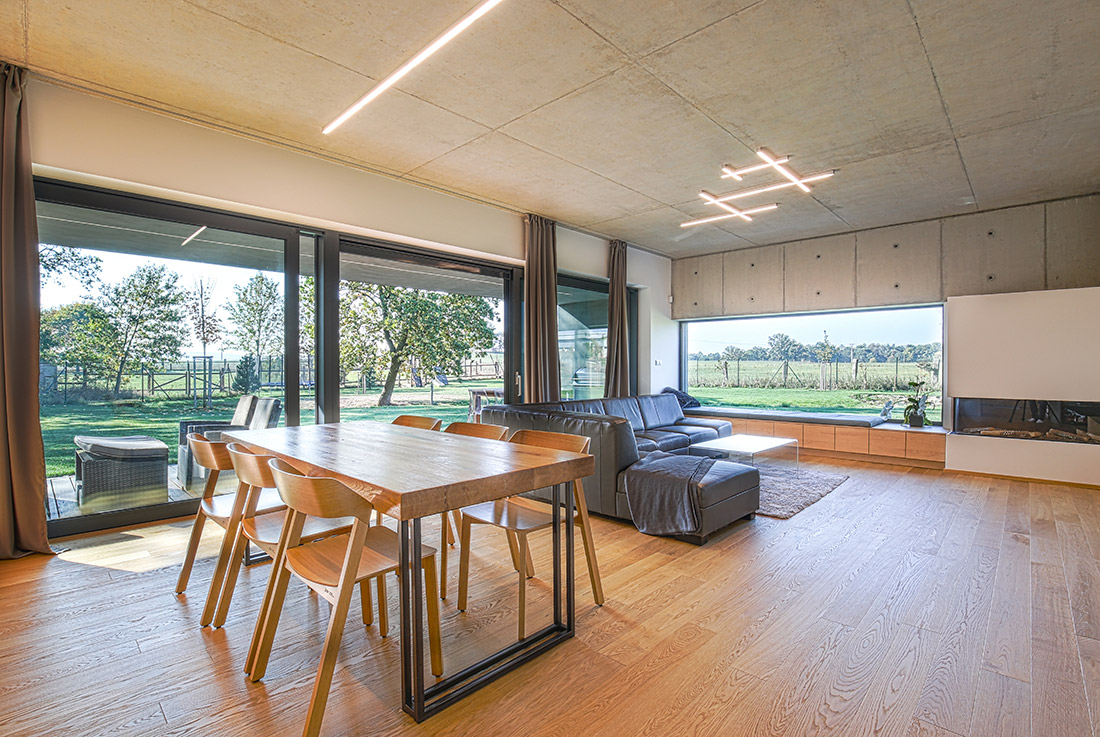 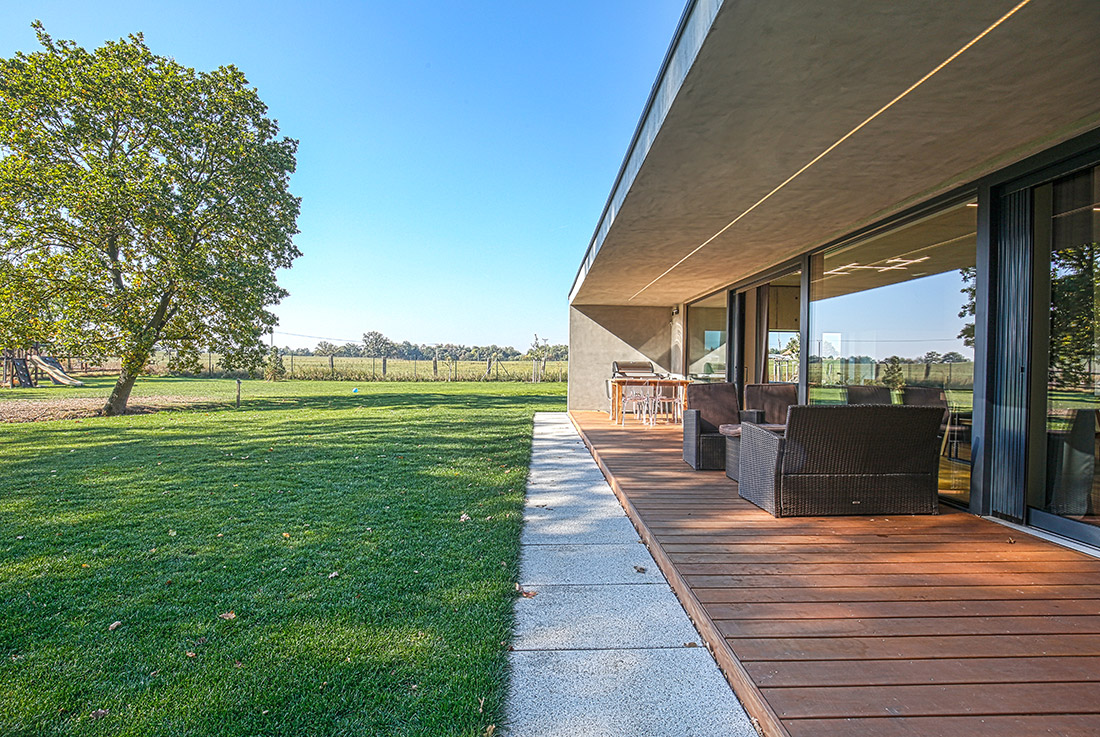 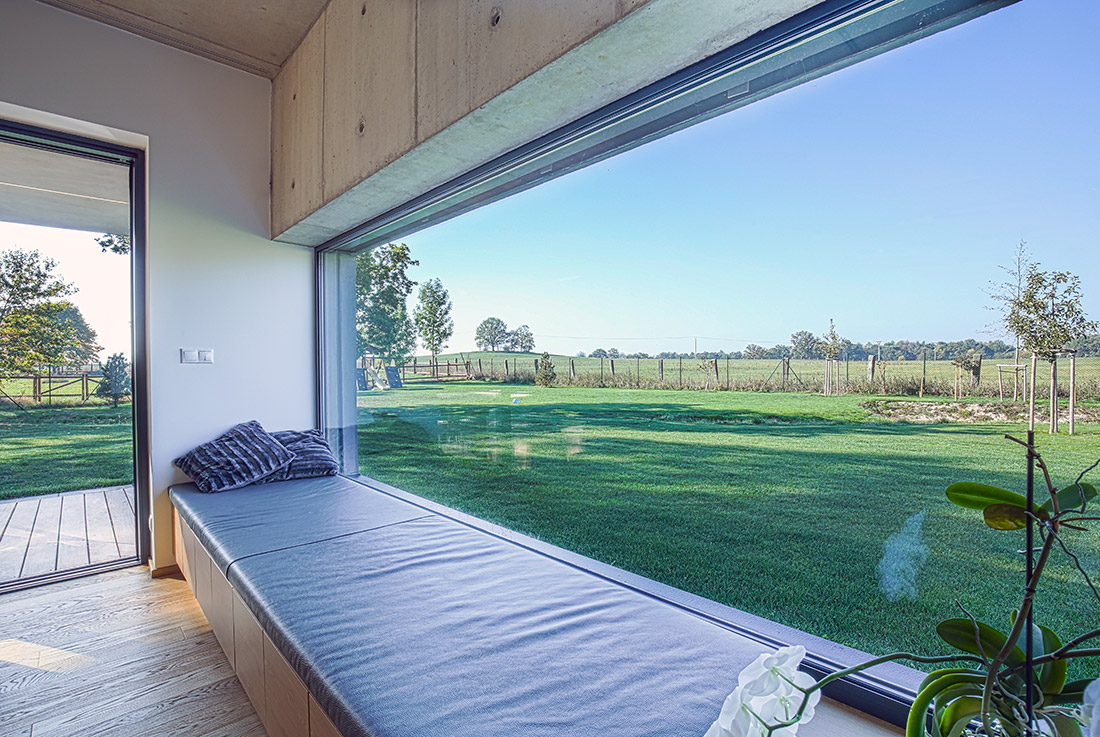 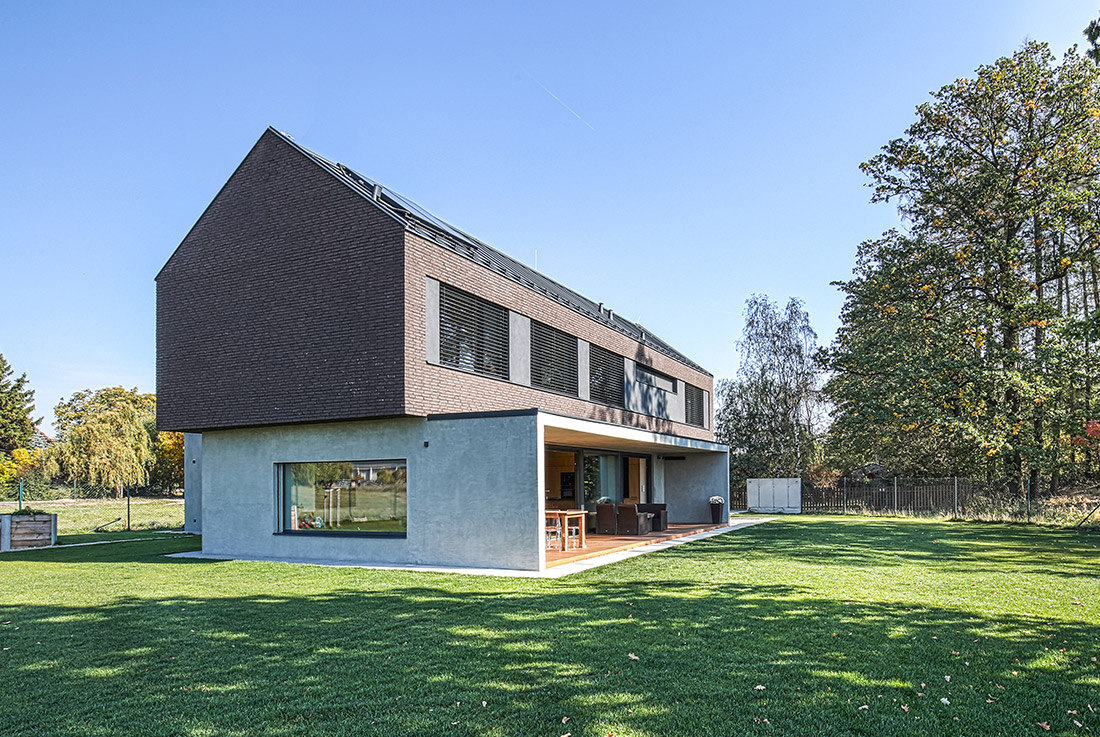 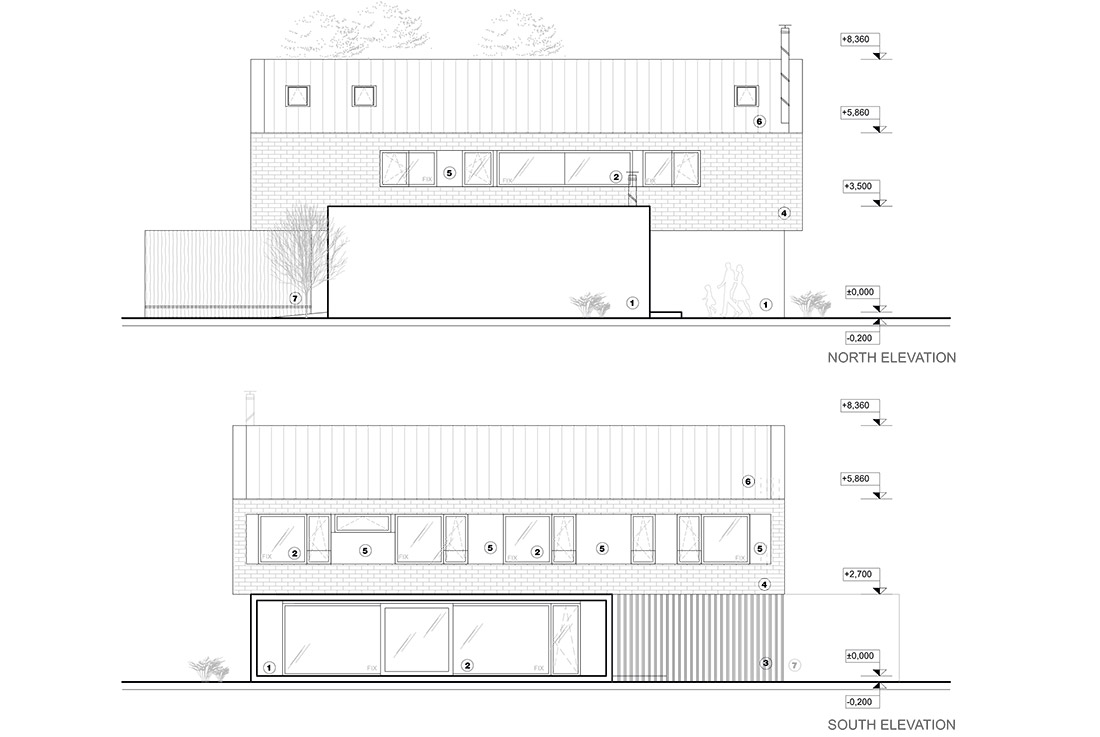 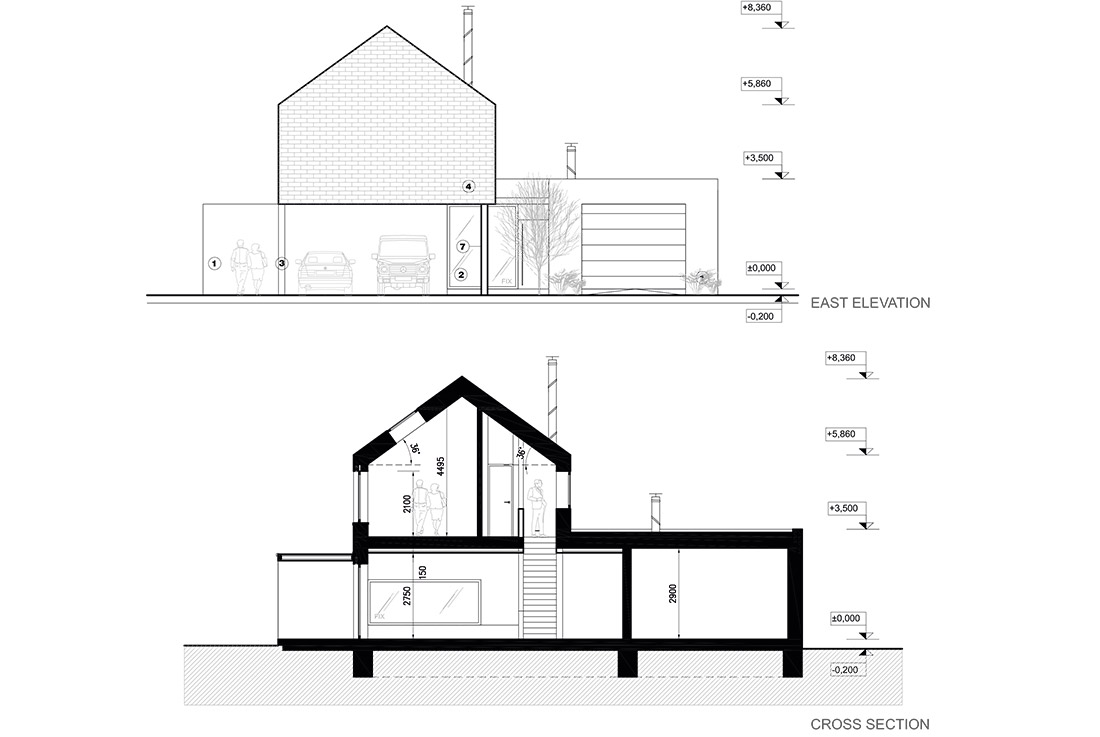 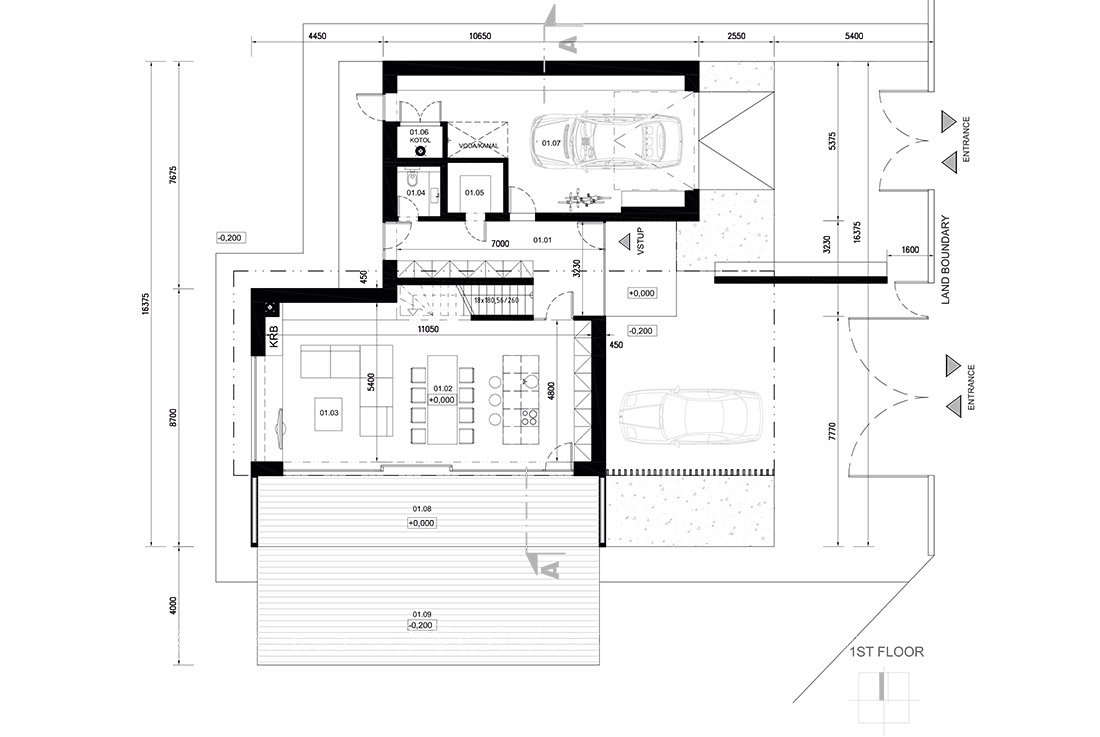 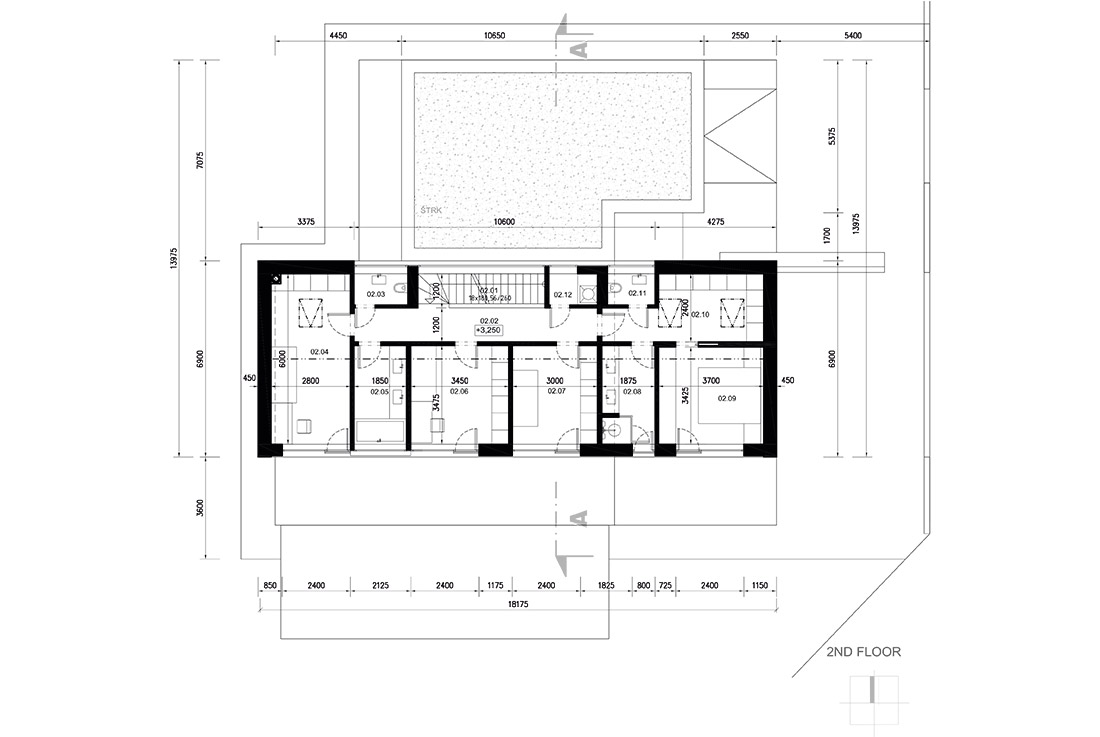 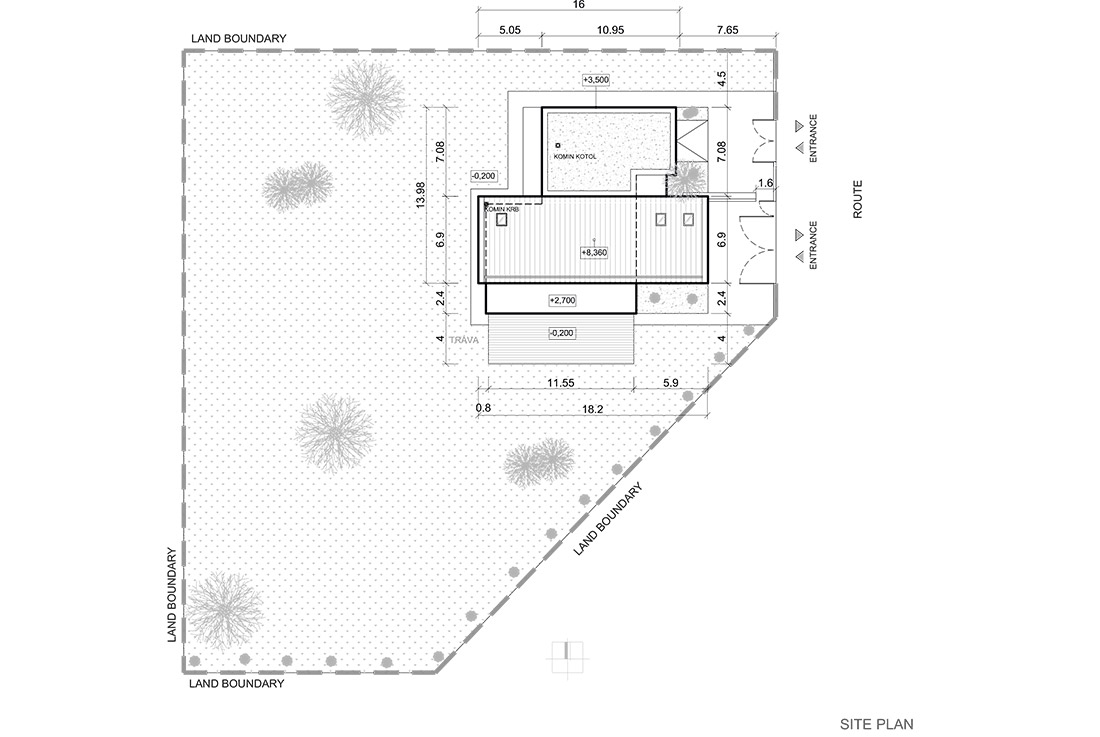