A new funeral hall for the town of Valašské Meziříčí is placed in the cemetery grounds at the edge of the town.
The architectural competition took place in spring 2014 with about 60 participants. The task was to design a new building of a funeral hall for 200 people along with columbaria, scattering garden and adaptation of space of the main cemetery entrance. Our winning project covered all the re-quired elements into the one composed unit – ceremonial district.
This ceremonial district is a clearly defined space element with a strong symbolic importance. A ritual meaning of the place is accented by an ascending axis symbolizing the last journey. This path is lined by trees and divided regularly – as well as the human life – by the regularly set stairs. The axis continues to the auditorium of the funeral hall and here highlighted by an outstripped skylight culminates in a catafalque space with a coffin.

CONCEPT
The cemetery of Valašské Meziříčí lacks both clear hierarchization of space and paths and a clearly defined entrance. A building plot for a funeral hall is exceptional in the structure of the cemetery district for its size and its location by the cemetery entrance. Furthermore, the plot’s character is understandable at first sight: a slope rising from rush and bustle into calm and peace.
A construction of the funeral hall was an opportunity to anchor a composition of the cemetery area by a new, solid urban element that would respect a current cemetery structure and help to define a location of the main entrance.
The composition of the ceremonial district uses timeless and generally rightful rules of symmetry, rhythm and perspective. At the same time the effect is used just in some functional amount in order to create a clear, transparent, descreet atmosphere in the moment of the last farewell. We create a dignified and contemplative milieu which develops the genius loci of the cemetery, either during the funeral ceremonies or between them – in the time of quiet peace.

THE FUNERAL HALL
The funeral hall building is single-storey with a markedly outstripped volume of the skylight in the axis of the last journey. The skylight is the central element of the composition of both exterior and interior space. Furthermore, its volume hides the roof endings of technical equipment.
The funeral hall is extended by an outdoor space covered by an overlapped roof. Funeral guests enter through substantial entrance door into a cross situated foyer and then into the main hall – auditorium. The course of the last journey is highlighted by the outstripped skylight in the foyer and, most importantly, in the auditorium. In the very end of the axis an apsis of the catafalque with the coffin is situated.
A typology of the auditorium is based on a traditional arrangement of a triple-aisle space with the pews by sides and a passage in the middle. This traditional interior composition allows different types of ceremonies to be held – for example a worship service and carrying the coffin out as the part of the ceremony.
The privacy of the auditorium is disrupted by the side visual connection with a mourning atrium. The atrium serves as a dignified transition into the ordinary days – a funeral guests’ exit and an access to the scattering garden, which is placed in the slope above the funeral hall. A calm atmos-phere of the atrium is emphasized by a slow flow of the water in Fountain of Life in the middle of the space.
The funeral hall working specification is reflected in a solution of the technical equipment. The hall is ventilated and heated by a combination of the systems (floor heating and air-air heat pump). The air from the outstripped part of the interior is taken and used for a regenerative brake.


VISUAL DESIGN
Interior design of the auditorium is meant as a symbolic contrary of two worlds – the world around us and the other world – elsewhere, further, higher. A dark-grey floor and wall cladding is in the contrast with an abstract white ceiling and the light incoming from the outstripped axis of the skylight. This scene changes at the end of the ceremony. A vertical curtain goes down and hides the apsis with the catafalque. Roller blinds outside the big side windows open. Incoming daylight invites funeral guests to return slowly to ordinary lives.

A ritual meaning of the place is accented by an ascending axis symbolizing the last journey. This path is lined by trees and divided regularly – as well as the human life – by the regularly set stairs. The axis continues to the auditorium of the funeral hall and here highlighted by an outstripped skylight culminates in a catafalque space with a coffin. 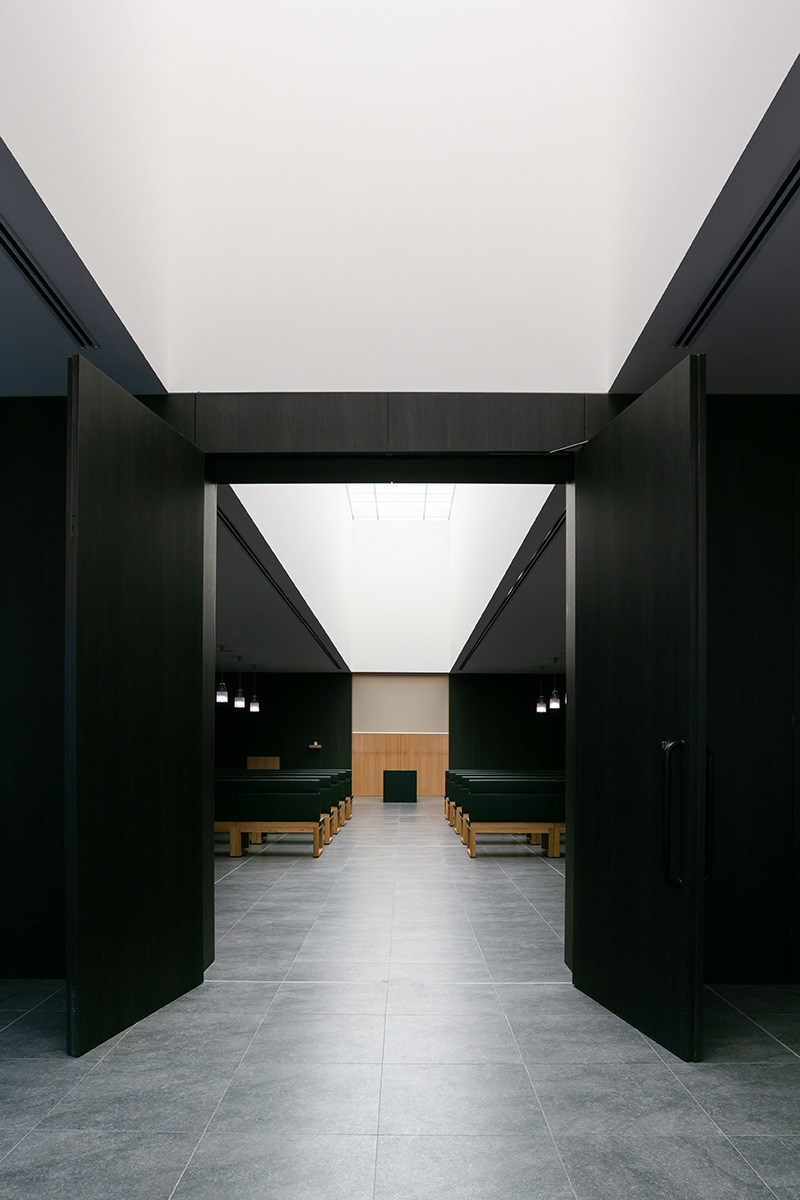 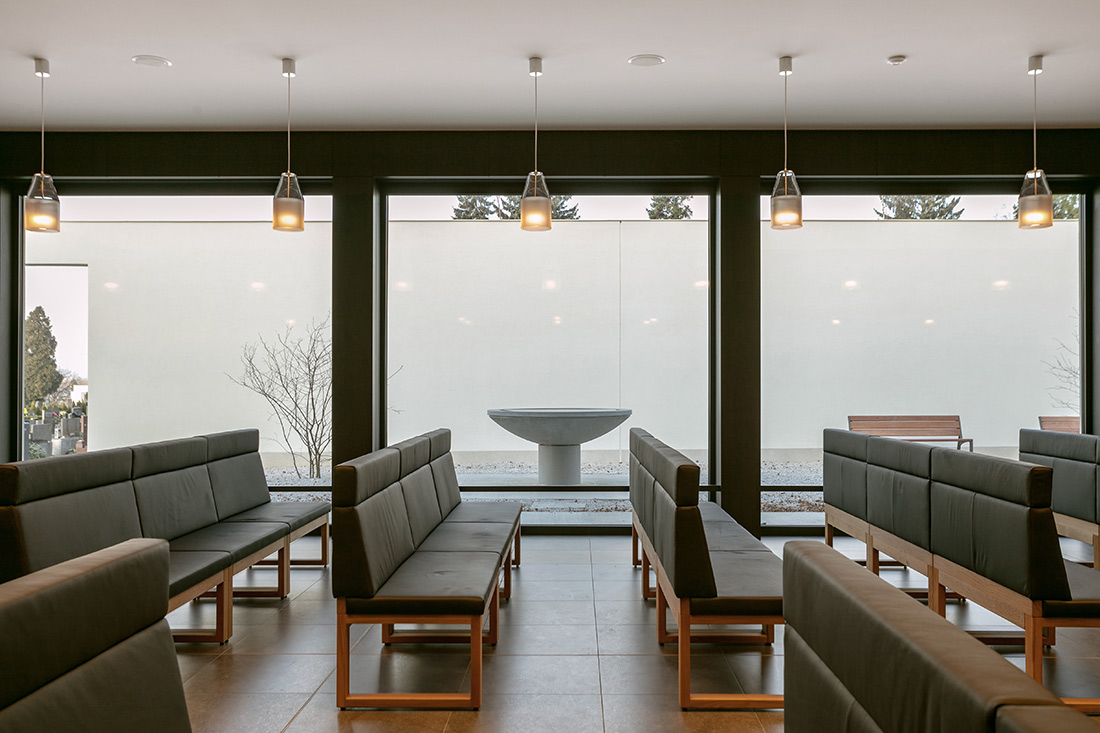 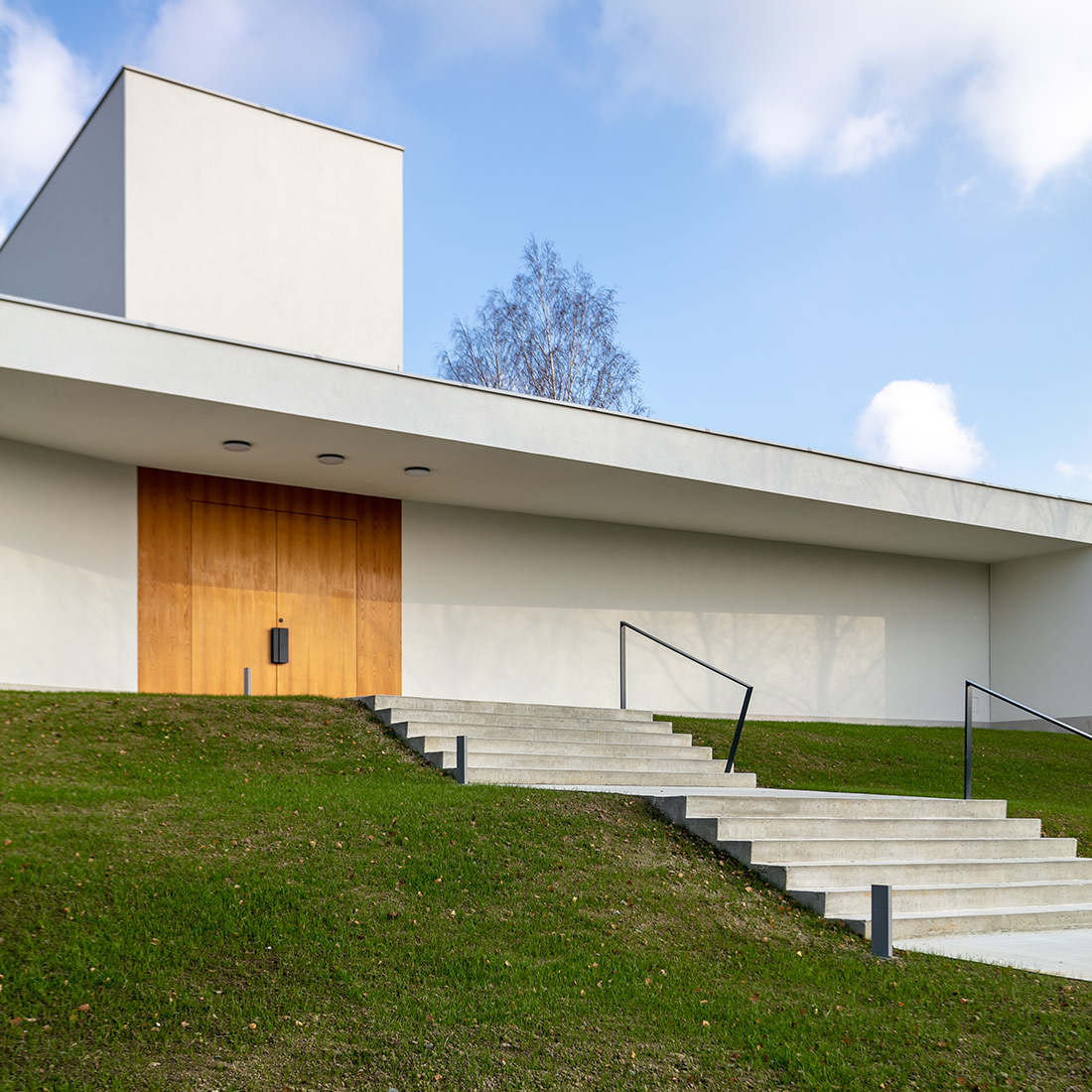 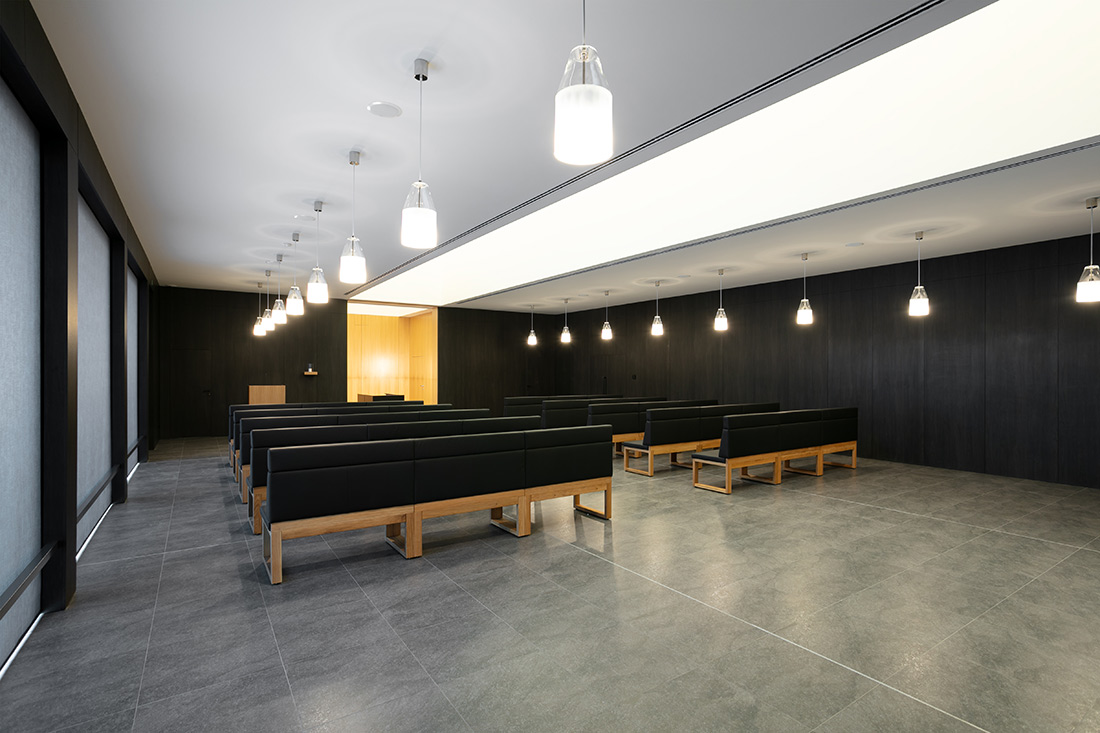 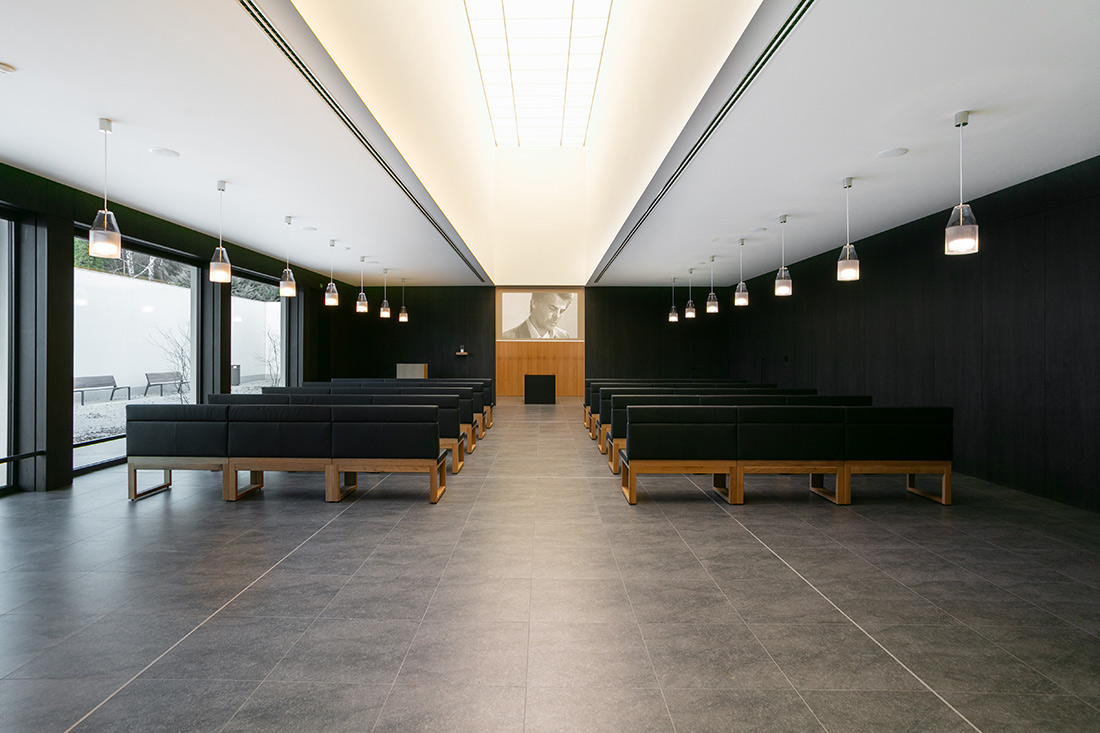 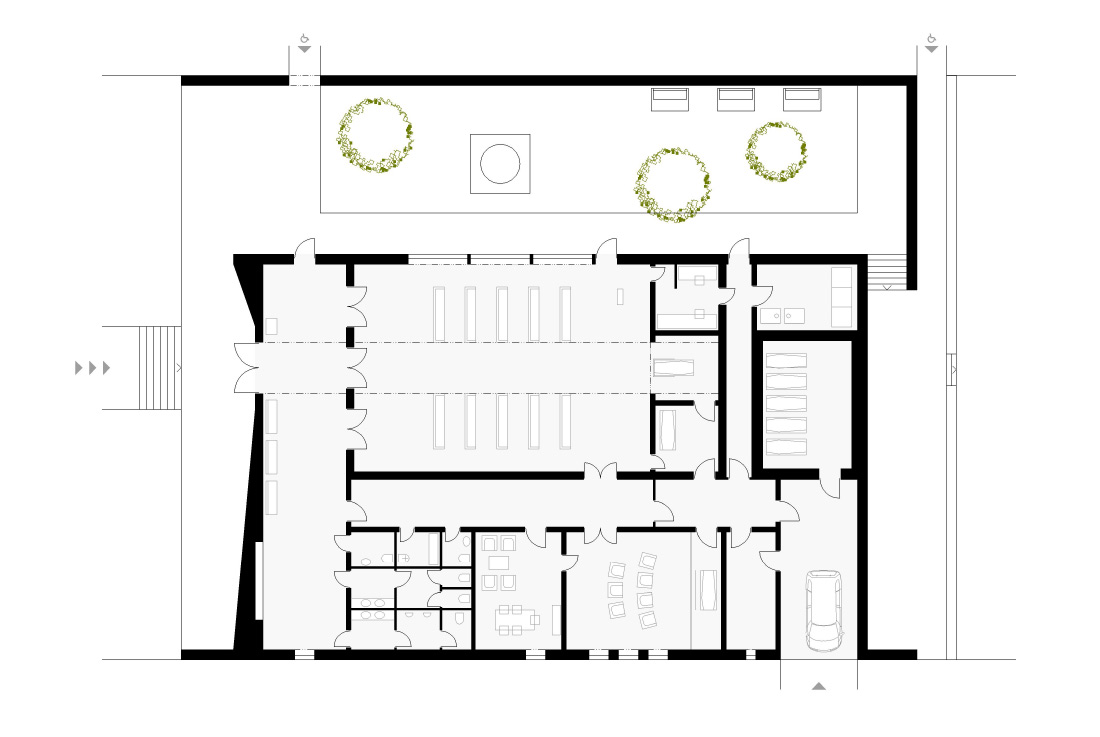