Villa Baronessa is an ensemble of two villas in the historic centre of the picturesque wine village Kaltern in the south of South Tyrol. The two houses are in the middle of a wonderful Mediterranean garden designed by Roland Dellagiacoma and surrounded by vineyards.
Villa Baronessa, has been thoroughly renovated under the direction of Architect Walter Angonese with Schiefer Tschöll Architektur and Manfred Alois Mayr, responsible for the artistic design, following strict ecological and energy standards.

ON ARCHITECTURE (Walter Angonese and Schiefer Tschöll Architektur)
“Add or continue? A recurring question! We have decided to continue to build at this villa which dates back to the fifties. It was projected by Walter Pinzer for baroness Weihrauch di Pauli. As a southern conclusion to the formerly extensive private park of the palais Weihrauch di Pauli, we adopted the existing building and conveyed it into the 21st century. Towards the east, the villa displays an extension, which took over its forms and themes. Attached to this extension a small building, which we always affectionately called „teahouse”, was built. This small pavilion-like building shall not deny any references to Japanese examples and yet it includes forms of our landscape and our living culture. While the round balcony at the main house reinterprets the kitchen vault. A connecting patio guarantees the conceptual approach to construction of continuing and not adding. The “teahouse”, as an independent small building with its hipped roof, reinterprets the typical monk and nun roof in a contemporary way.
In spite of this the protagonist of the whole remains the landscape: the views over the vineyards to lake Kaltern, the view into the Dolomites or to the Mendel mountains. While the already existing openings remain, the new ones focus on the landscape views. But no view is the same. Every view has its own frame; every view becomes a picture that frames the landscape for its inhabitants. Inside, typical local materials generate a special atmosphere. Wood, terrazzo floors, plaster and a colour concept conceived by the artist Manfred Alois Mayr are supposed to make the house vibrate in a special way.
The building owners demanded a house for themselves, which is probably the reason why its appearance is not that of a touristic structure, but rather of a building where Claudia, Reinhart and Florian as hosts welcome their guests. The lush garden, a place of sensations and tranquillity was designed by the garden designer Roland Dellagiacoma. Two swimming pools ensure an autarkic impression. There is a spacious garage for the cars and a wine cellar – typical for Kaltern – should not be missing as a special place. A stately house consisting of two wings in which the spirit of the baroness still seems to be present was created.” 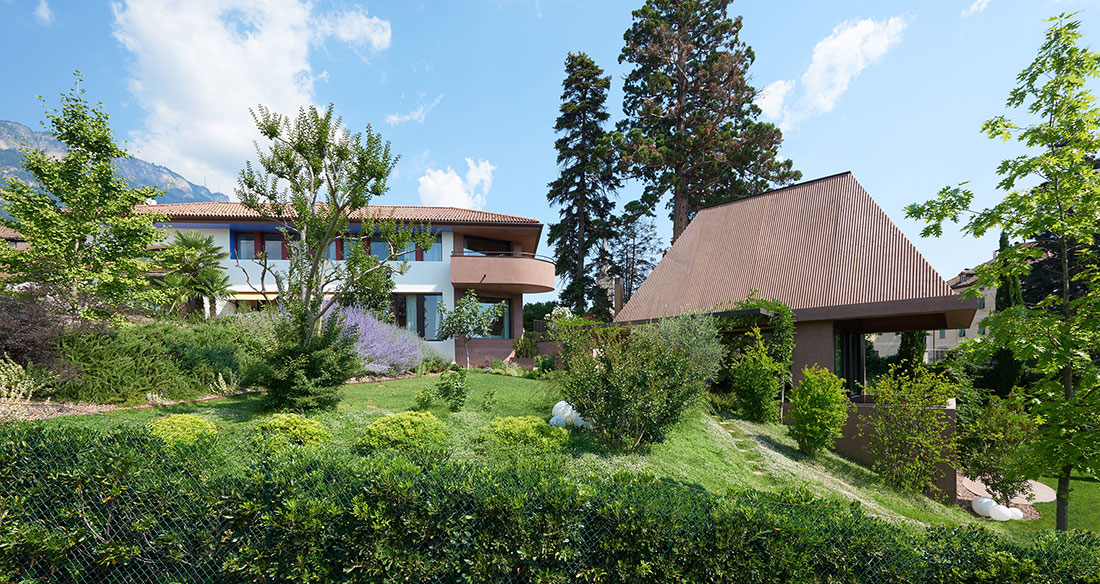 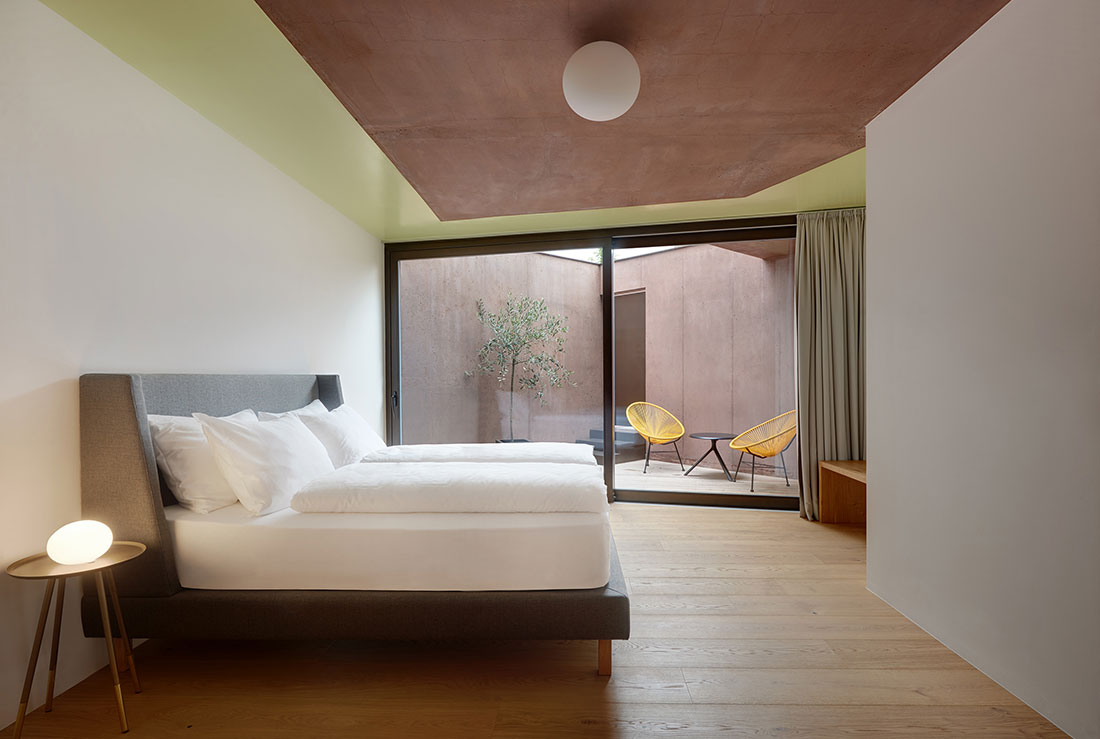 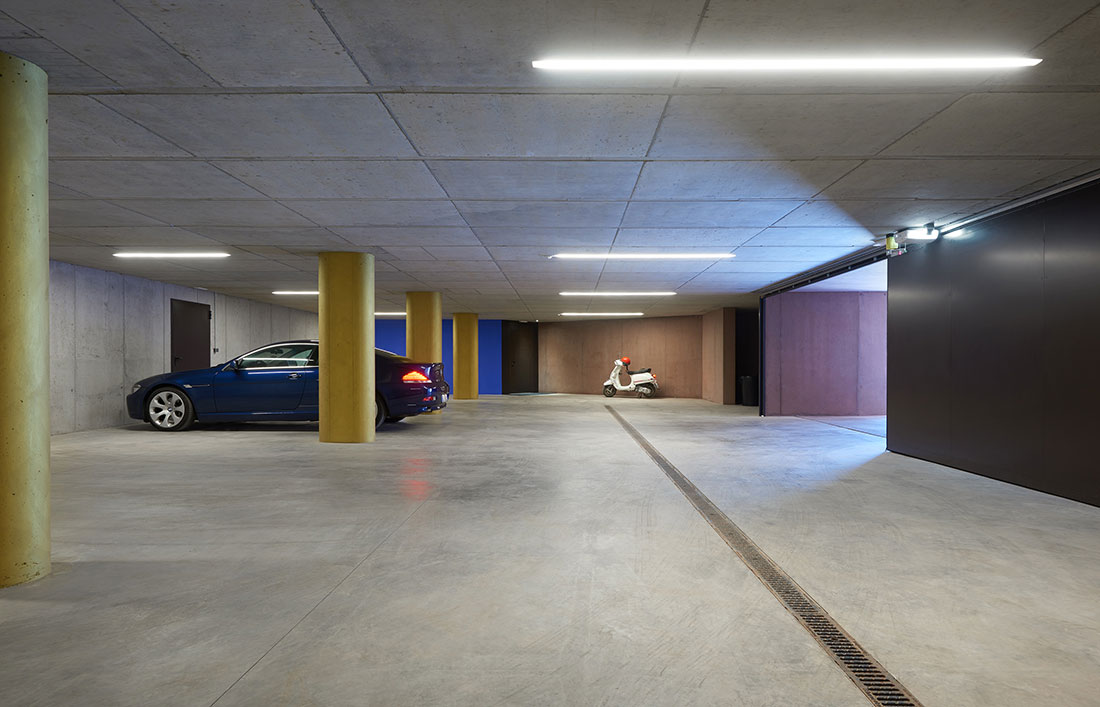 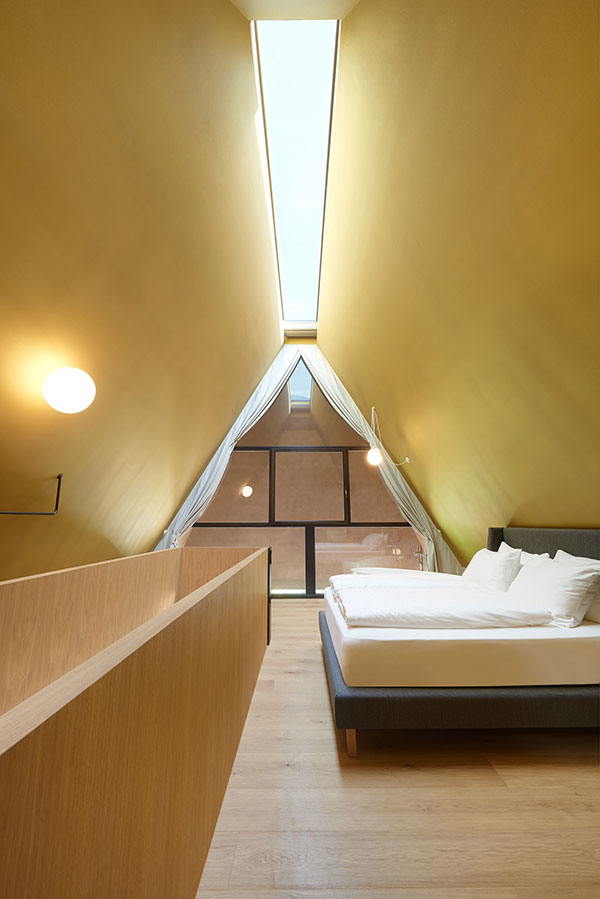 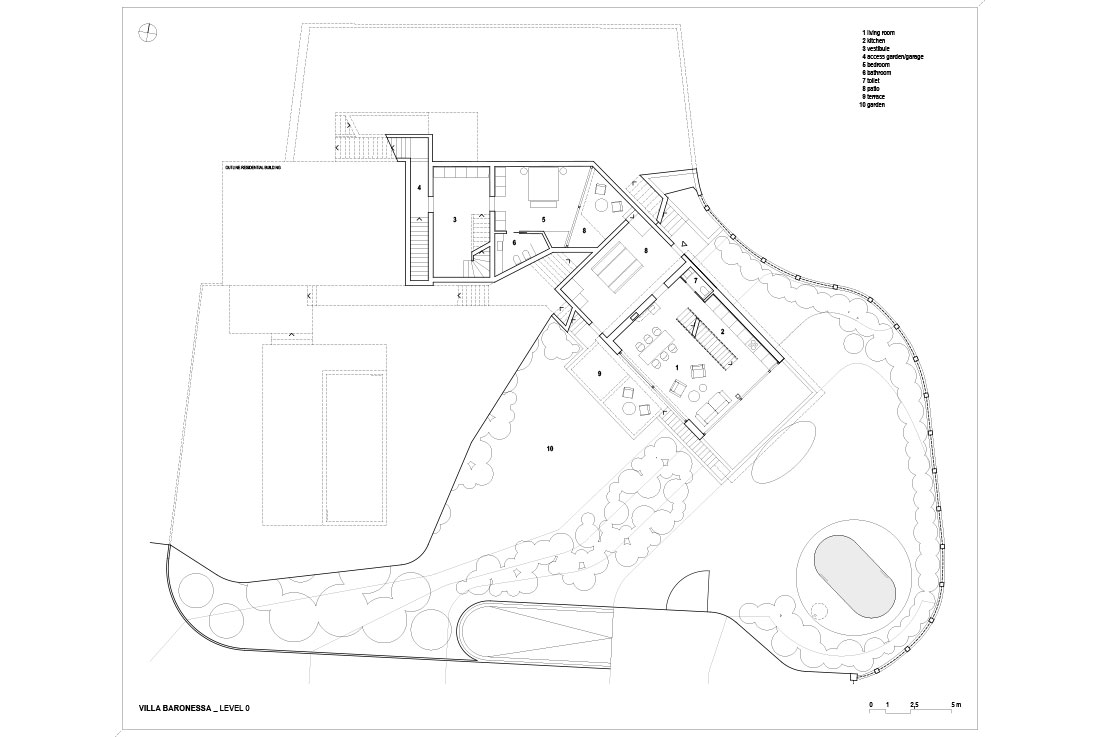 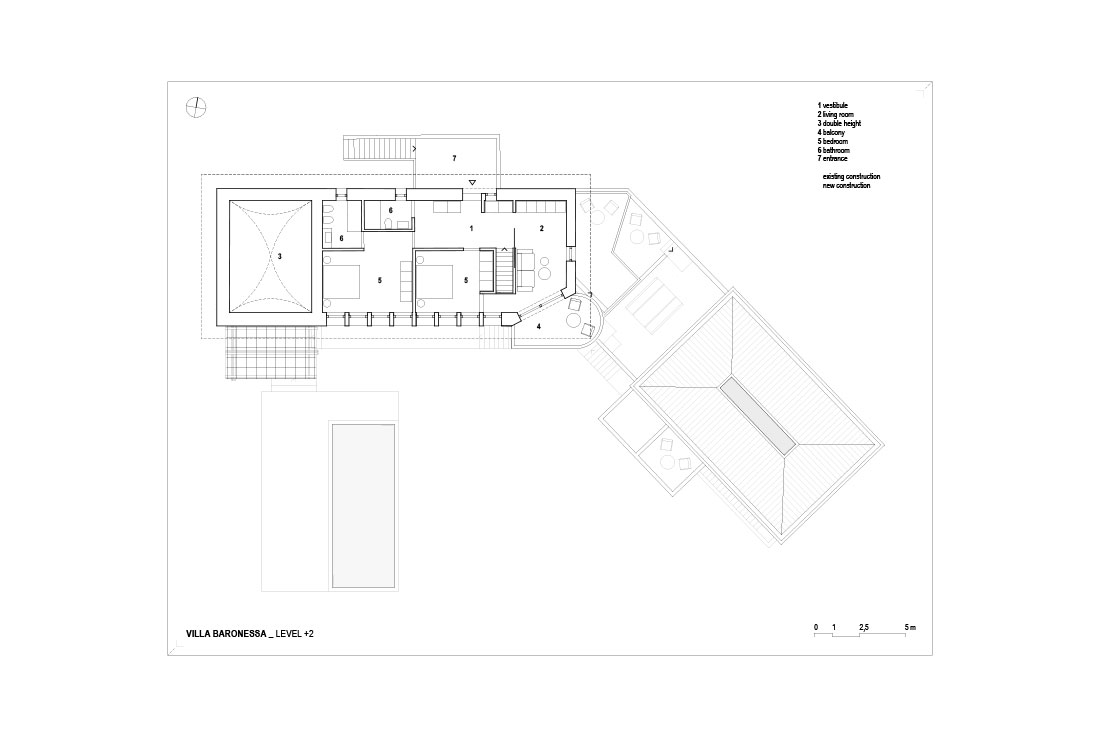 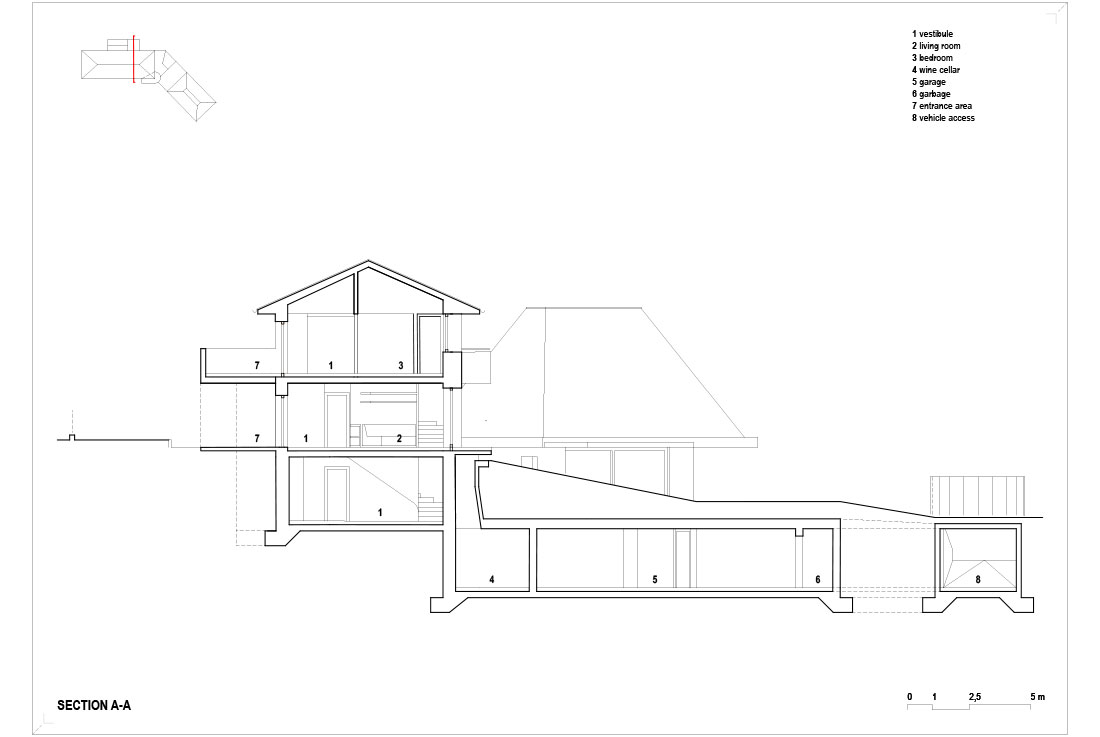 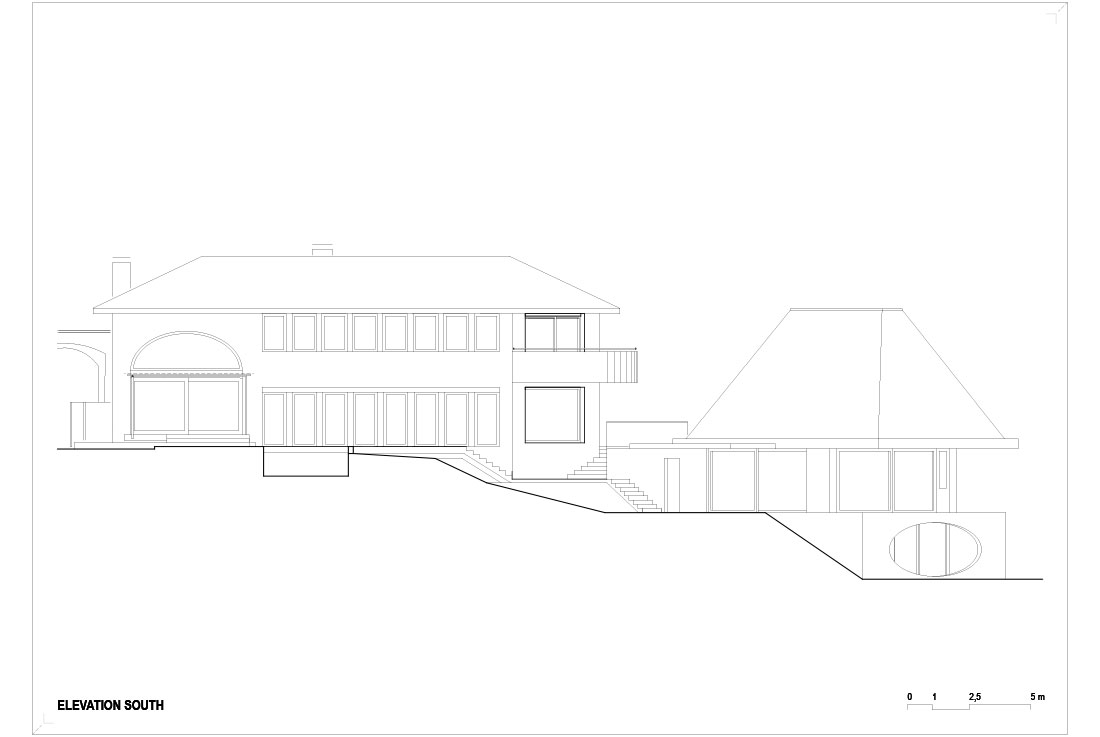