Hidden in the bucolic landscape of Northern Vosges Natural Park, Site Verrier de Meisenthal is a publicly funded active cultural center in a historic glass factory dating back to the 18th century. Three independent yet interrelated institutions: the glass museum (Musée du Verre
et du cristal) – a living memory tracing the history of glass at the site; the CIAV (Centre International d’Art Verrier) – an international glass art center where traditional craftsmanship meets contemporary practices; and the Cadhame (Halle verrière) – a multidisciplinary cultural space hosting art installations, happenings and concerts are sited at varying floor levels. Our intervention unifies them to define a contemporary
institutional identity in dialogue with an industrial heritage. An undulating poured-in-place concrete surface alludes to glass production as it
unites the buildings. The surface functions as roof, ceiling, and wall, connecting the buildings’ ground floors to frame a public plaza. New functions are sensitively introduced under and over this surface, including offices, workshop areas, a cafe and restaurant. Existing building functions are reimaged and extended: the factory hall is given a new entrance on a previously unused basement floor and a 500-seat black box theater that can be reconfigured as a theater with standing room for 700 or opened into a concert hall for 3,000. The new public space heightens civic awareness of the historical site and also introduces a highly flexible venue for outdoor theater, concerts, and seasonal festivities.

What makes this project one-of-a-kind?
Our design responded entirely to the site and project conditions. The varying state of each building in the complex each called for a thoughtful intervention. In some cases the removal of some material, in other cases demolition. One building had an identical twin built adjacent to it. Apart from their conditions, the rolling landscape meant all buildings existed on various levels. To achieve a standard height for the complex, SO – IL and FREAKS stretched a curvilinear form across all buildings, framing a new public plaza. The concrete surface alludes to the site’s heritage as it resembles glass in its material properties. Like glass, concrete is largely made of sand and is moulded in a fluid state before hardening into its final form. The intervention newly expanded the visitor experience to equally amplify the front of house exhibitions and back of house glass-blowing facilities. In a sparsely populated location with public budget for improvements, the adaptation successfully welcomes new audiences, including the glass fabrication staff, performance groups, art shows, and year round visitors who activate the public plaza. 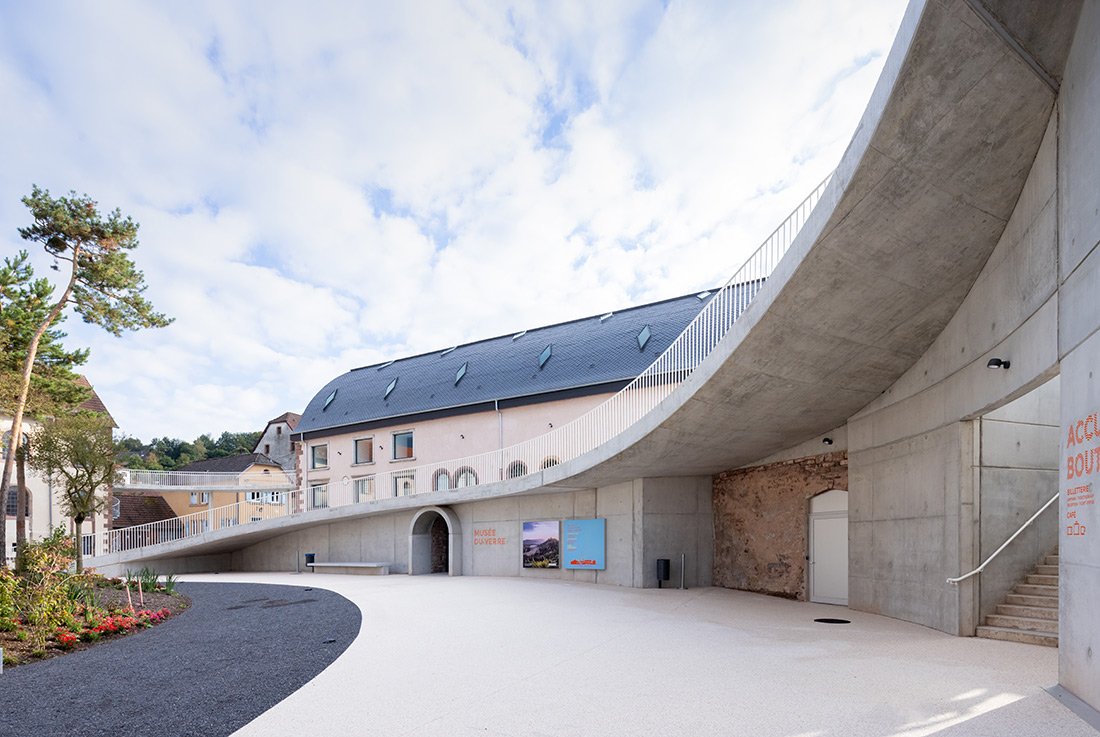 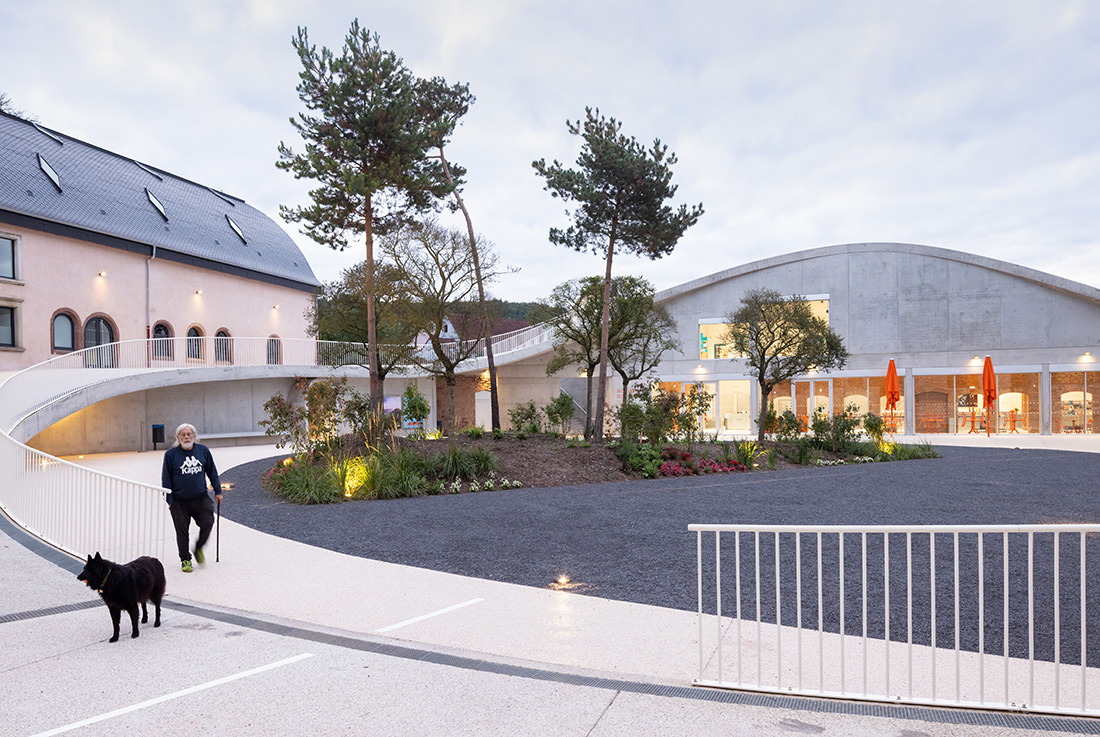 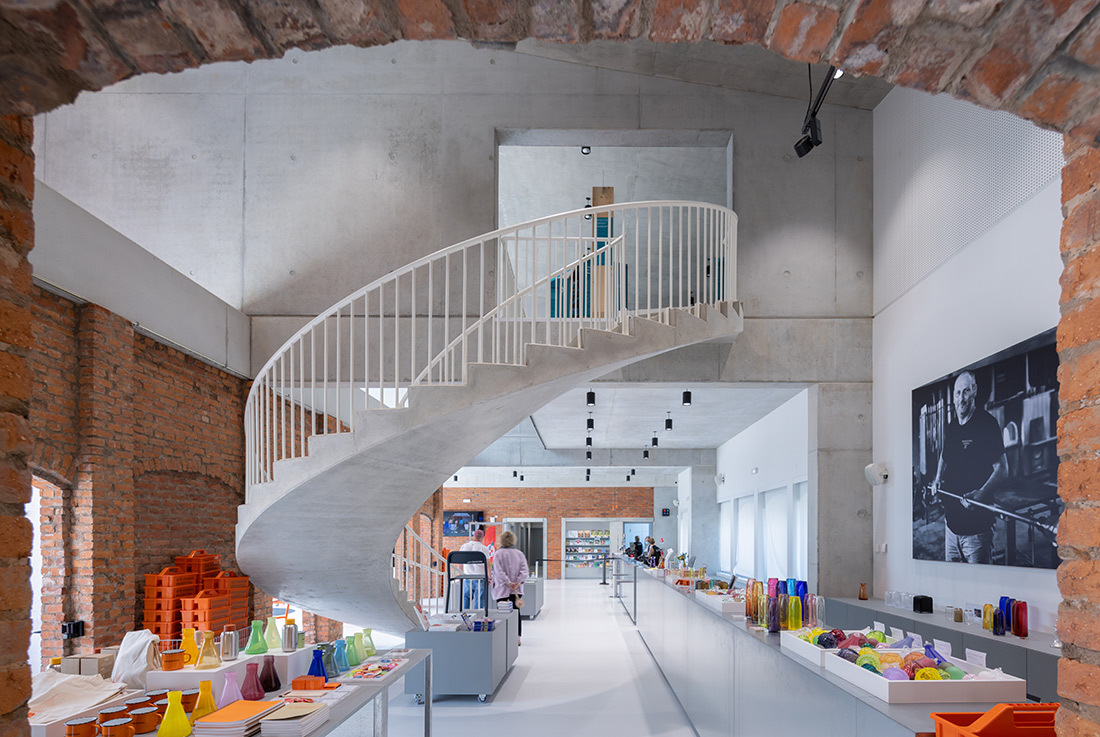 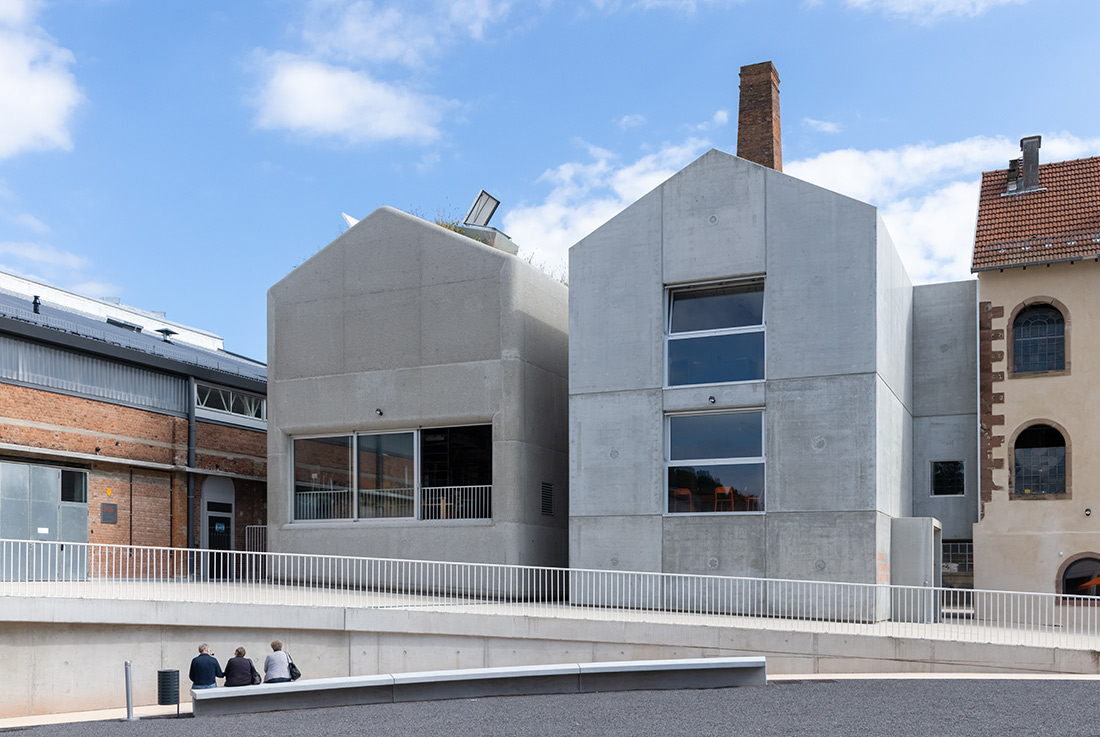 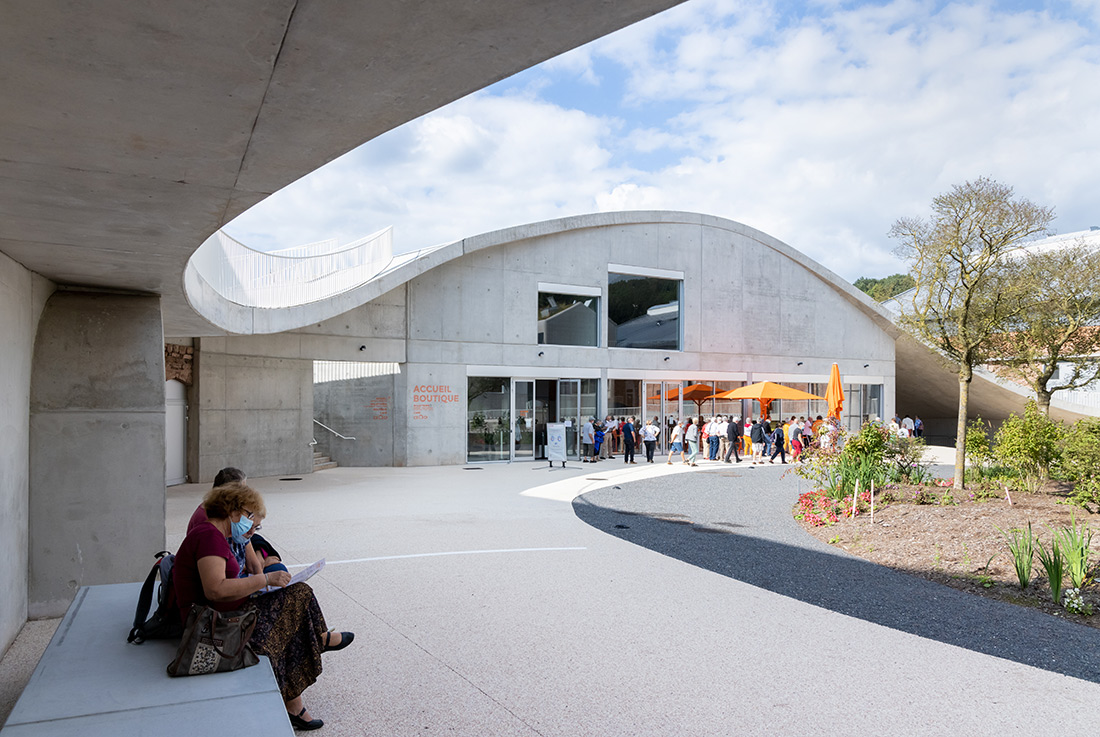 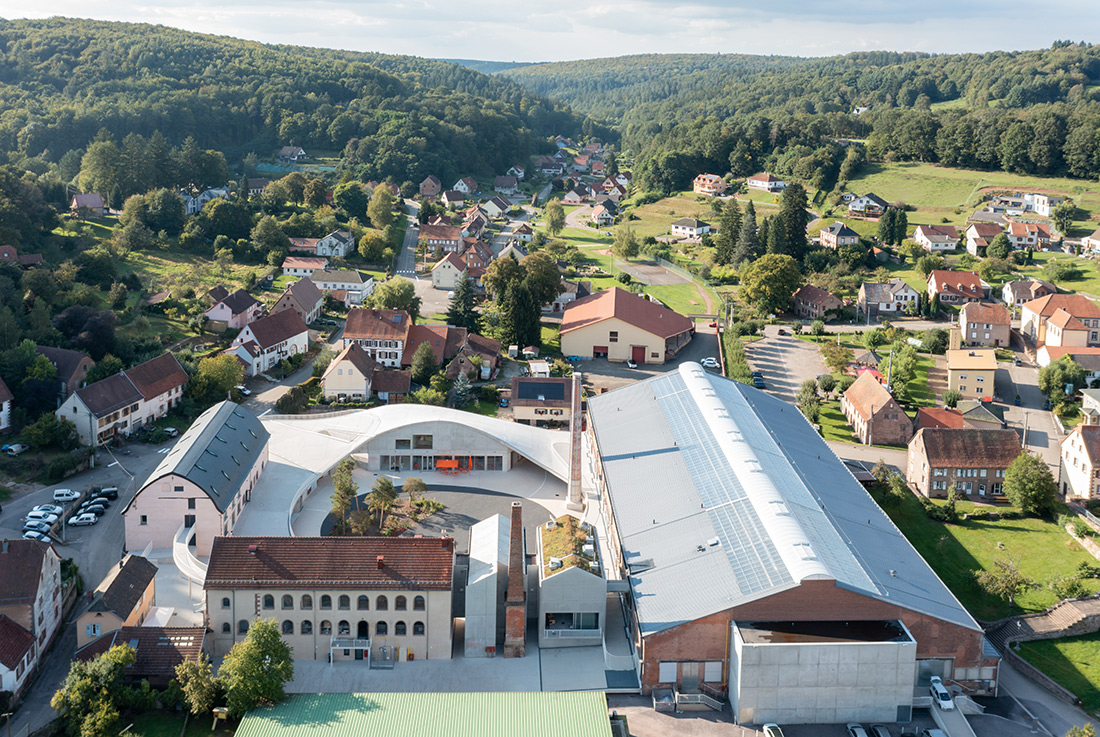 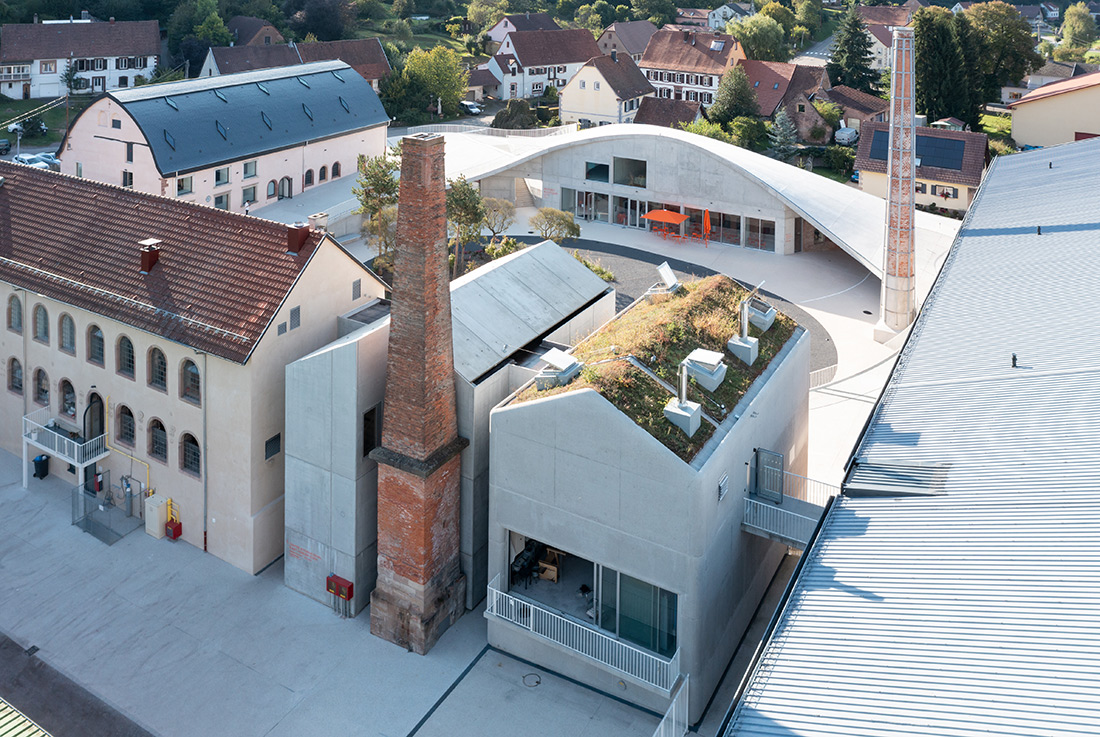 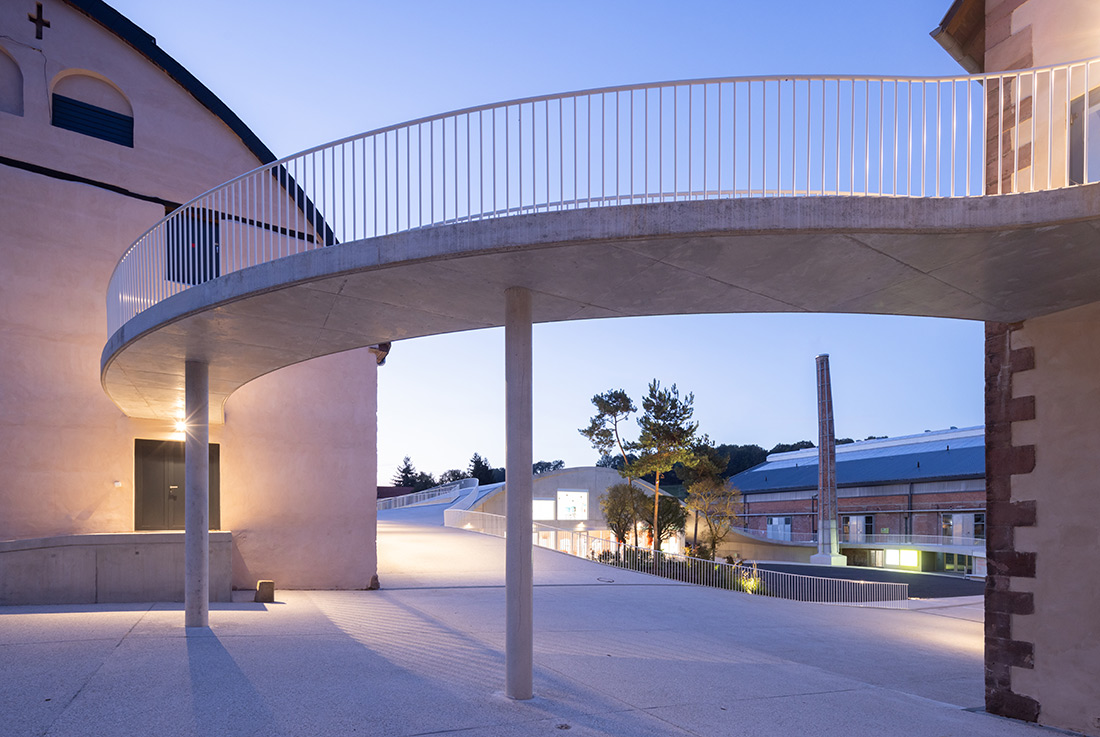