For about ten years now, Stephan Küng, head of Küng Holzbau (Küng Timber Constructions) in second generation, has put a lot of effort in solid wood
construction. “Holzpur” (Pure Wood) is the name of the system, that Küng has established on the market. The basic elements of “Holzpur” are solid, about 20 cm thick wall parts consisting of seven layers of boards. The boards themselves are made out of “moon wood”, which usually is cut around Christmas time before new moon, when there is almost no water left in the trees. This results in less shrinkage and a smaller risk of infestation with wood pests. This is what the company is convinced about and they find more and more customers who don’t want a usual frame construction with boards and adhesives, but nothing else than wood. Pure wood. The just recently finished headquarter building of the company itself in a small industrial zone near to Alpnach – where Küng Timber Construction has been rooted since its beginning – not just solves a spatial problem, but also works as a demonstration object, business card and a 1:1 scaled billboard for this solid wood construction.
The building has been designed by Seiler Linhart architects, an office situated in Lucerne and Sarnen, that has been working intensively with Küng since the year 2009. Relation to the tradition of central Switzerland The close to square, four story building offers space for 20 project leading engineers in individual offices and furthermore holds meeting spaces, a cafeteria on the ground floor and an exhibition space on the top floor, where interested customers get to know the products that the company stands for. On the outside, the buildings appearance is defined by its surrounding wooden ties and the overhanging balconies which are reminiscent of the traditional balconies of central Switzerland. They not only serve as an outside space, but also provide shadow, so that no other shading system is needed. Type of wood and function The hanging parts of the façade are made out of oak, the façade itself has been faced with roughly sawn spruce boarding. Boards with cnc-milled crescents are covering the lintels of the façade openings – ornaments referring to the “moon wood”. The walls are consisting of two pure wood elements, separated by a layer of wind paper, resulting in a wall construction that measures about 40 cm in total. The boards used for the insides of the walls are of low-quality wood that is usually processed into fiberboards. The ill-fitting of these boards is an advantage, since the air trapped between the boards helps in terms of insulation.
A Hard Core as a Sculpture The precision and the detail loving that Seiler Linhart Architects put into their work are astonishing. They reach as far as to the sophisticated wooden furniture system which allows a variety of configurations and fits perfectly in every room. Impressing is the two-story entry hall, displaying a reception desk on the right and a meeting table on the left; via a wooden screen the conference rooms on the first floor open up towards the hall. And in an instant, when entering through the main door, unexpectedly the core of the building appears, a concrete structure unifying all stories, holding staircases and elevator. The architects made a virtue of necessity by turning the non-wooden, stiffening core into a sculpture. A fireplace in the entry hall and another one on the top floor accentuate the cozy feeling in the house, which is actually an administration building. But because of the use of solid wood and its sensorial appearance almost never appears as such. 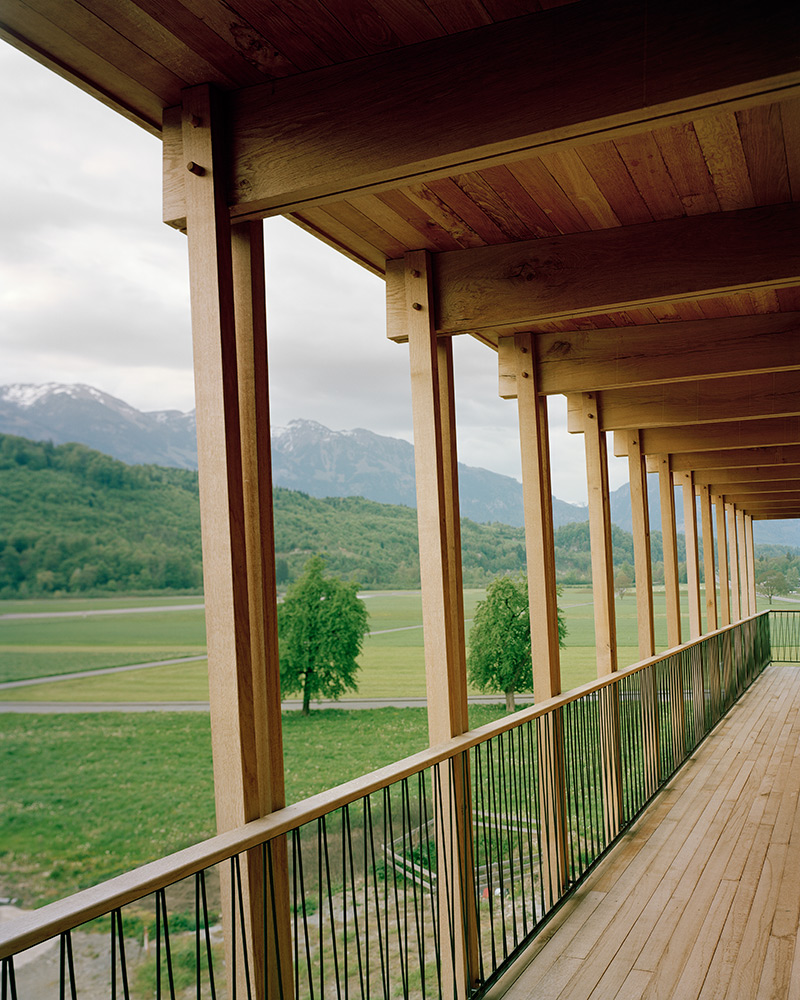 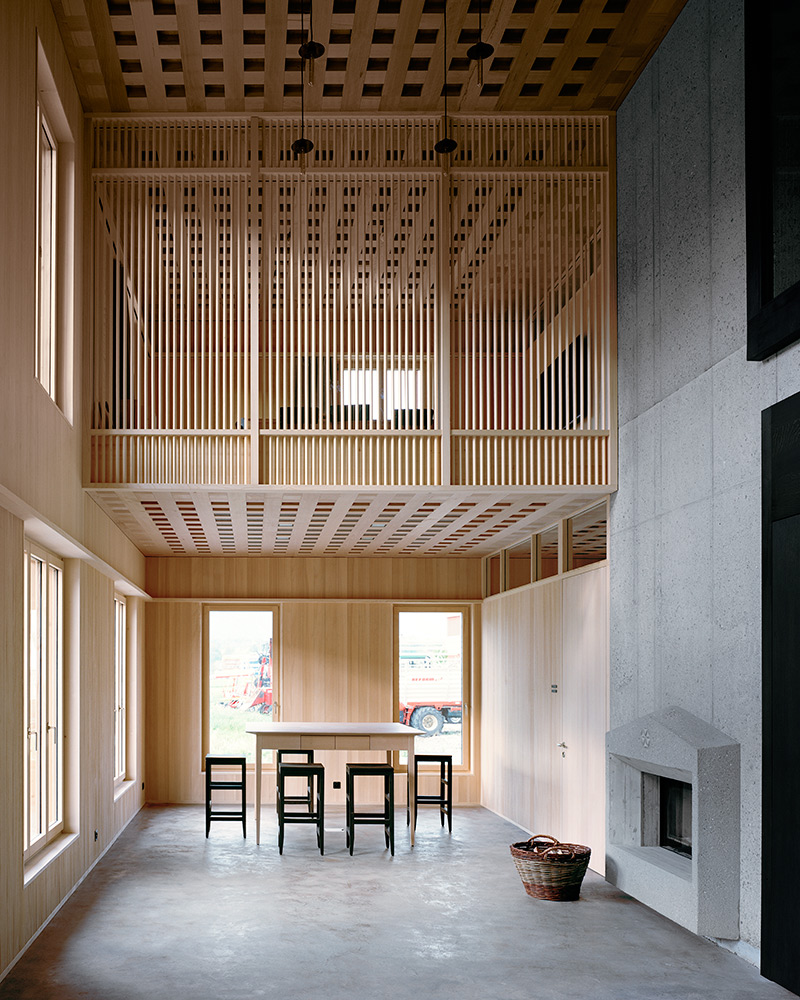 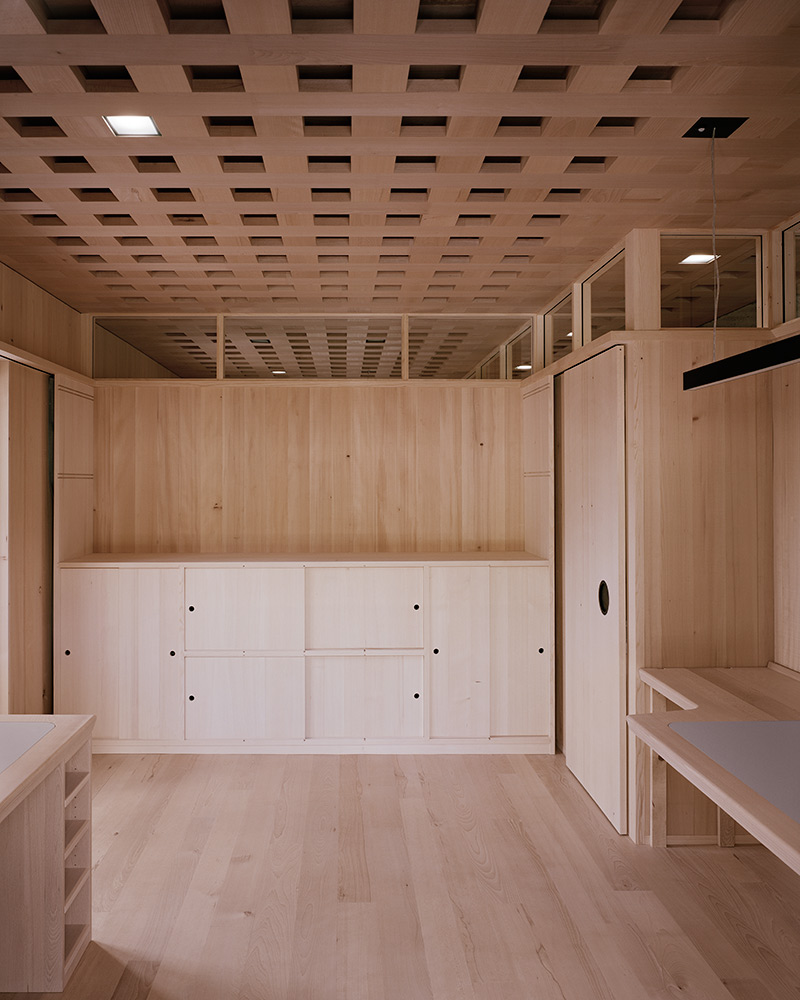 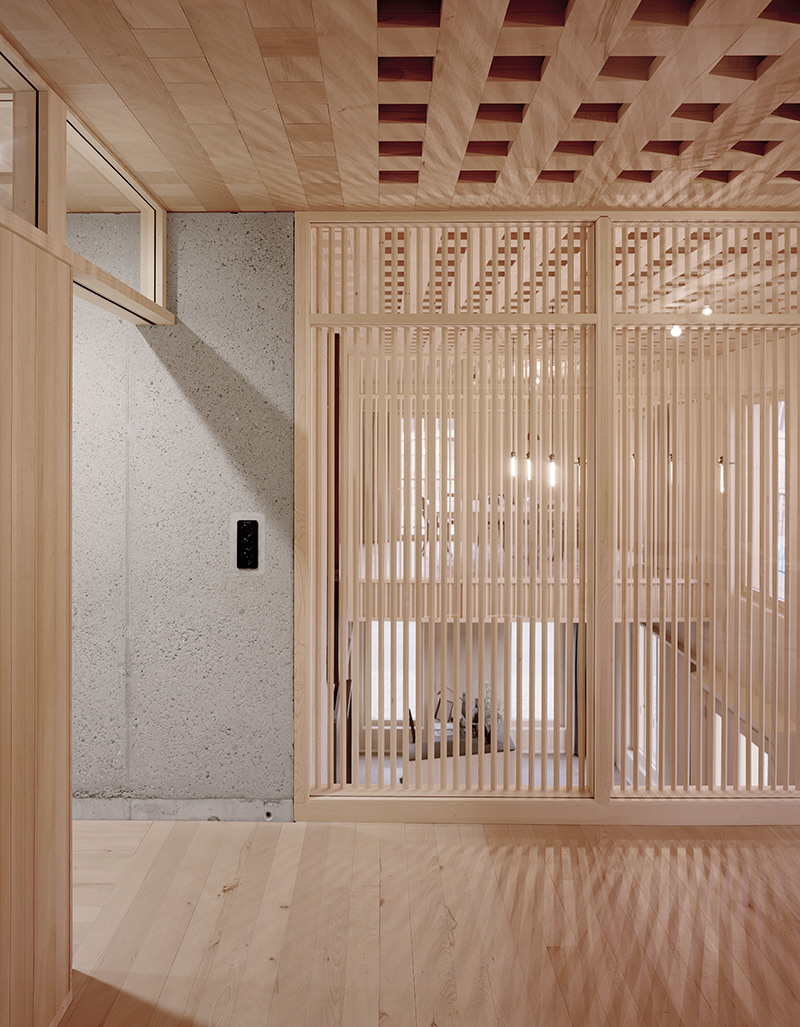 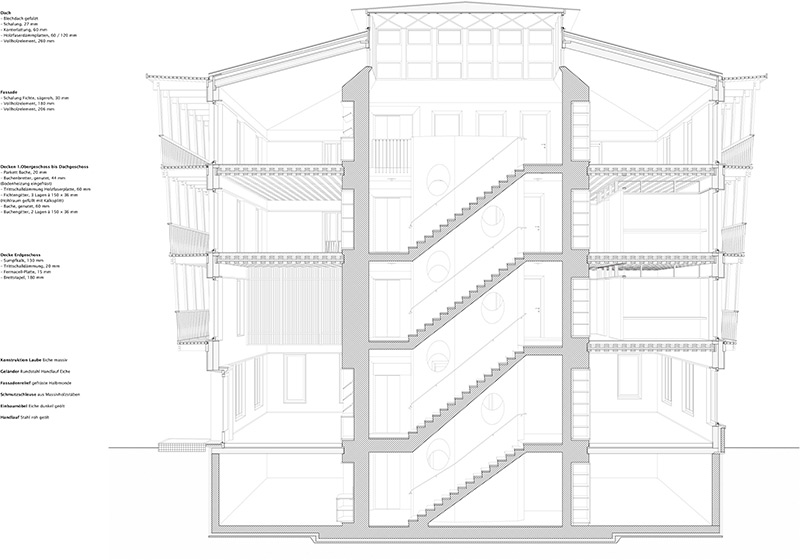 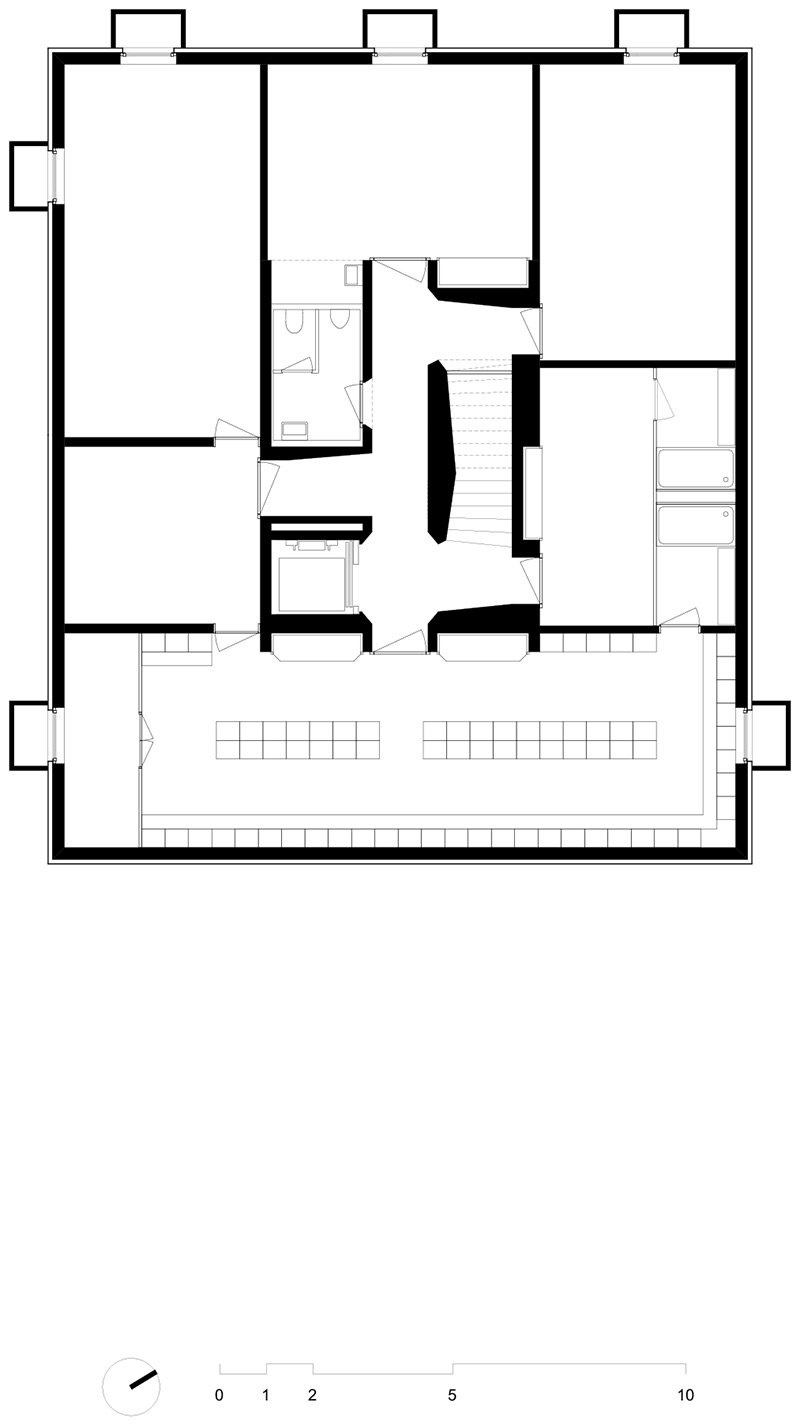 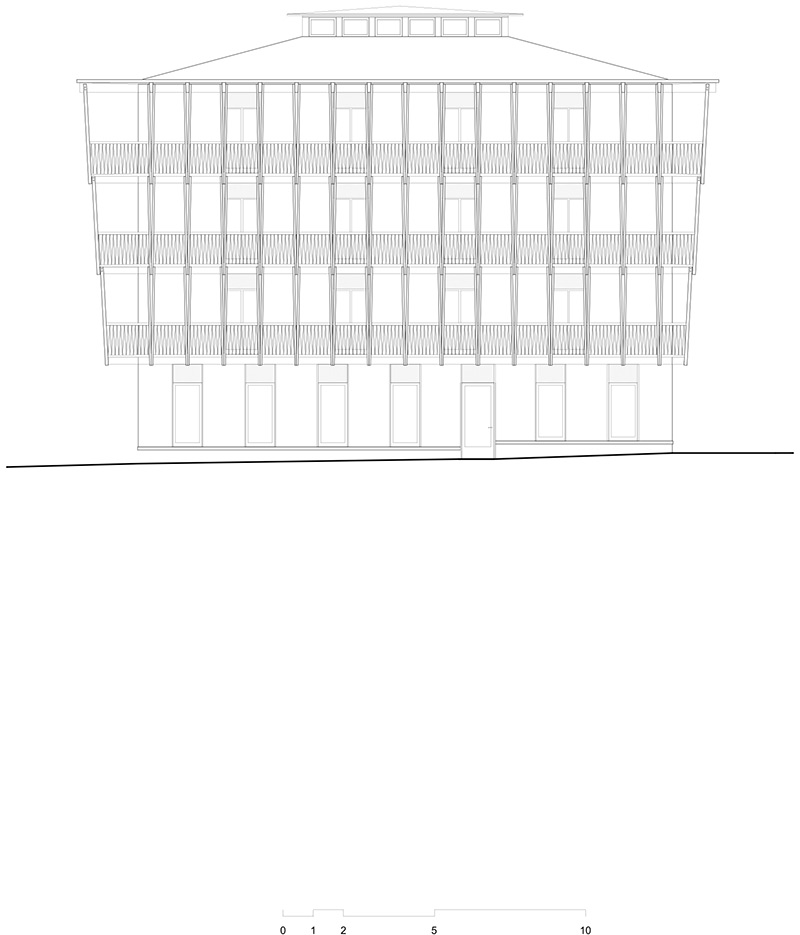 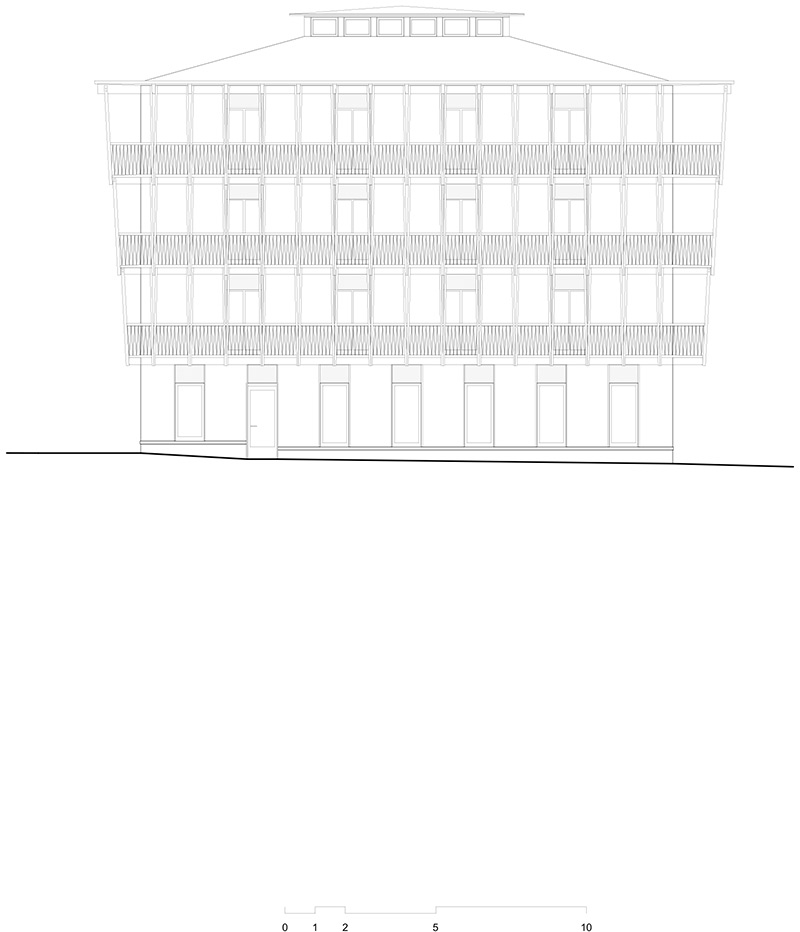 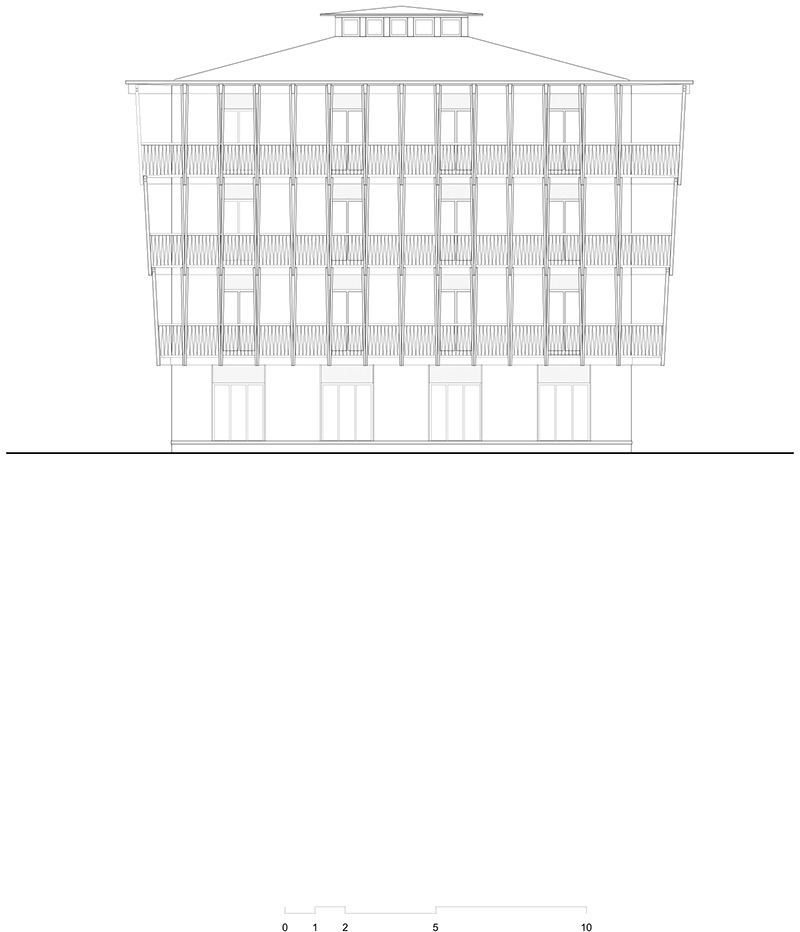 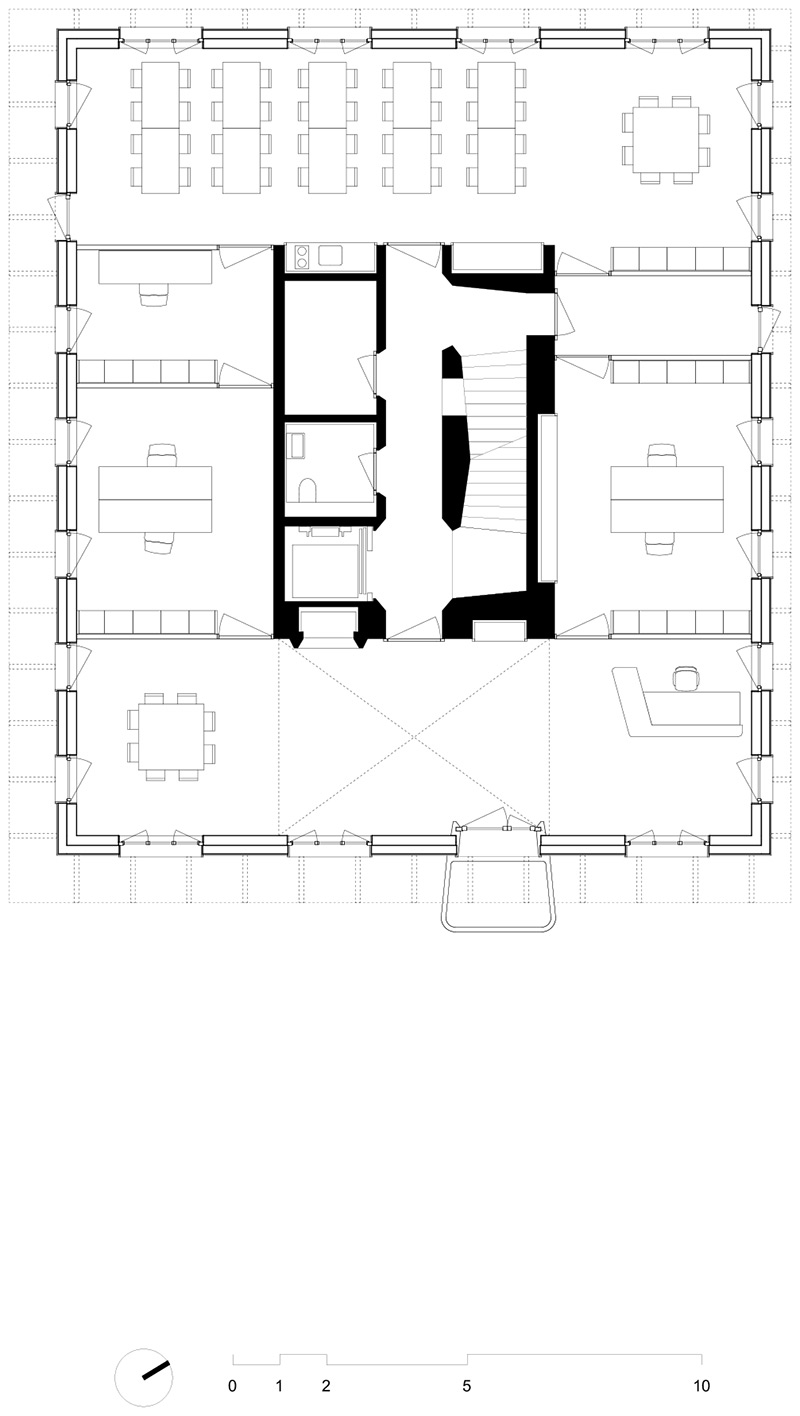 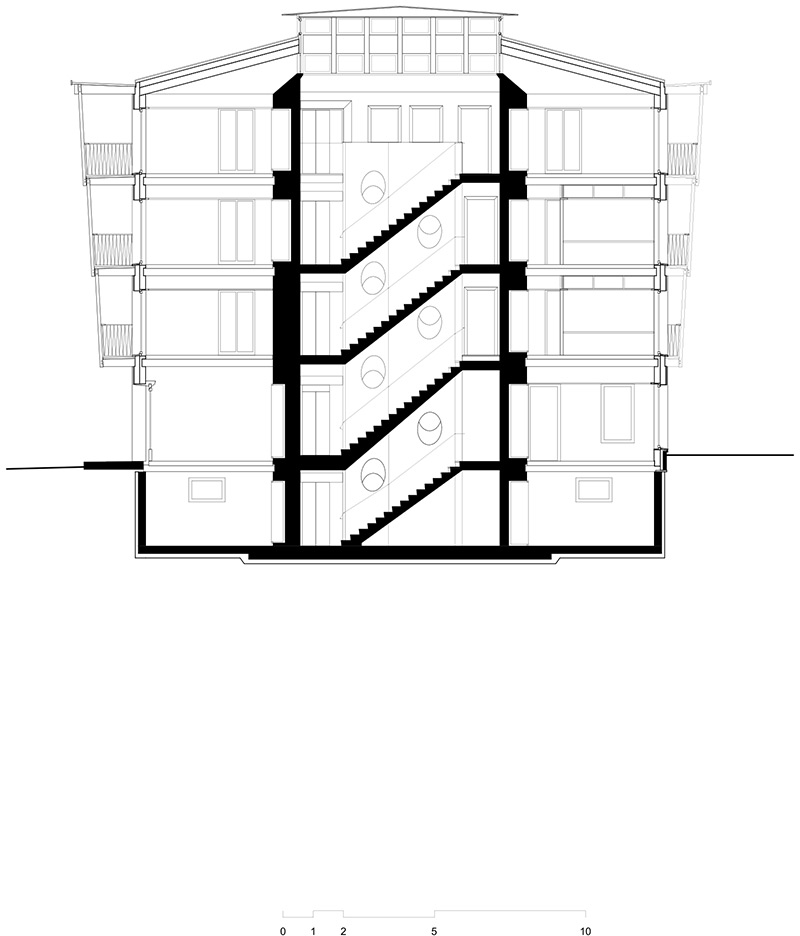