The plot of Ellipse Center is located on Tsarigradsko shosse, in the are between 7th and 11th kilometre. The access to the site in south-east direction (heading to Plovdiv) is from the local lane of the boulevard, and in northwest direction (to the city centre), access is from under the bridge at Copenhagen Blvd. The site is almost square with insignificant slope from north to south.
In the early stages of design in 2007, there is no construction done close to the construction site. The only high-rise building at the time was an office building on the opposite side of the boulevard, north-east from the plot. The location, which provides clear visibility of the future building in both directions of the Tsarigradsko shosse Blvd. – entering and exiting the city, demands the quest for a signature architectural solution.
The construction of the building started in 2008. The reinforced concrete structure was completed in 2010. In 2017 the finalization of the building is renewed, based on a complete renovation design concept prepared by the original architectural team of LP group.
The building consists of 2 underground car-park levels and 13 above-ground floors, hosting primarily office functions.
The main pedestrian access is from the north corner of the plot, from the local lane of Tsarigradsko Shosse Blvd. There is a pedestrian alley along the low-rise volume of the complex. Secondary direct entrances are provided for specific functional zones, such as the office areas in the podium and the retail areas in the base of the tower.
All functional zones are accessible through the vertical circulation routes and the floor lobbies.
First floor of the tower hosts a restaurant which benefits from the adjacent landscaped roof-top terrace on the low-rise podium.
The office levels are designed, so that independent tenant areas can be organized in options of one to four individual tenants per floor. The floor plans and the designs of the main engineering systems aim to provide that on any of these options is applicable independently on any floor, according to the requirements of the tenant.
The axial displacement of the floors in relation to the circulation core provides for a higher variety and flexibility in the distribution of office areas following tenant needs, which in general is not an easy task in a central-core building and is another market advantage.
A new specific lettable area is introduced with the modernization concept – the so called “loggia”.
It is an outdoor covered area for use by the specific office, developed on the existing floor structure, and enclosed by indent façade walls. These are located on floors L1 to L11, behind the side façade of the tower (in the narrow portion of the ellipse), one above the other following the inclination of the tower. The loggias provide rest area to each office, so that people can go out outside on the very floor they work on. These areas function even better in the floors with open space offices, where they are functionally connected to the indoor rest & canteen area.
Major advantages of the project are the high energy efficiency, the independence of the tenant areas, the green areas providing higher comfort, the loggias on each floor and of course – the location.
Defending the architectural design of the project before the start of construction would have been harder, because it would have been still hypothetic if the building would become one of the key factors in the silhouette of the boulevard. The fact that the building is not left unnoticed, that it became famous even before it was finished and inhabited speaks for itself. It stands on its place, i.e. is present, despite the enormous volumes constructed around it.
The direction of the larger axis of the ellipse – at an angle to the boulevard, the inclination of the tower, the simple grid of the façade mesh, refusing to terminate at the top – are the factors which provide dynamics and spatial tension and make the building significant in the silhouette – a landmark.
All of the above provide for its long life outside the competition of form, size and decoration. 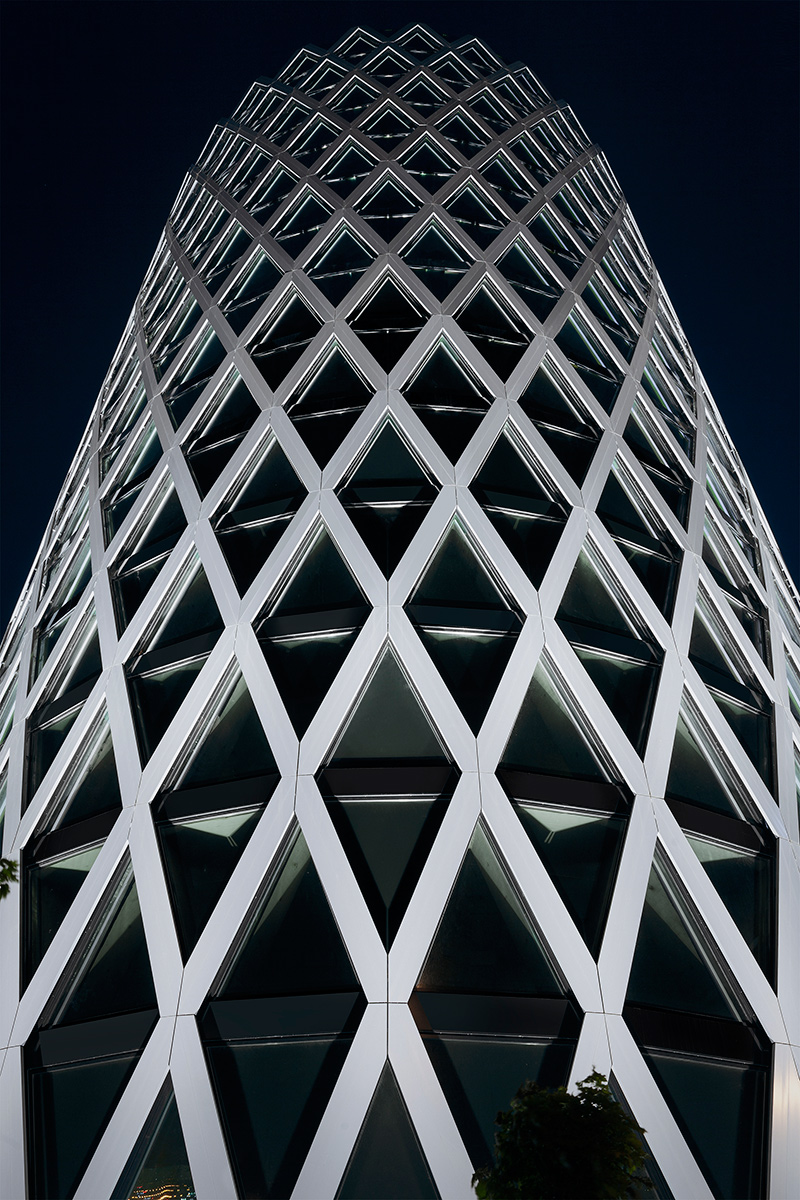 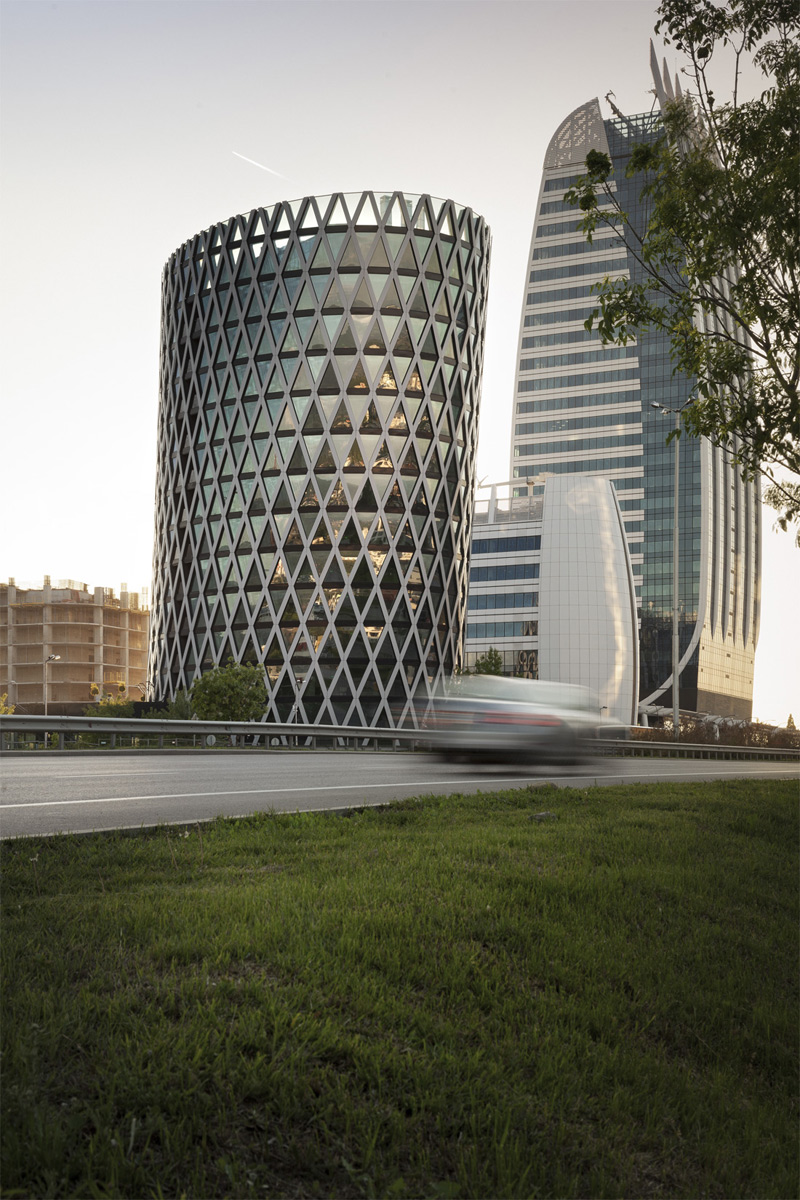 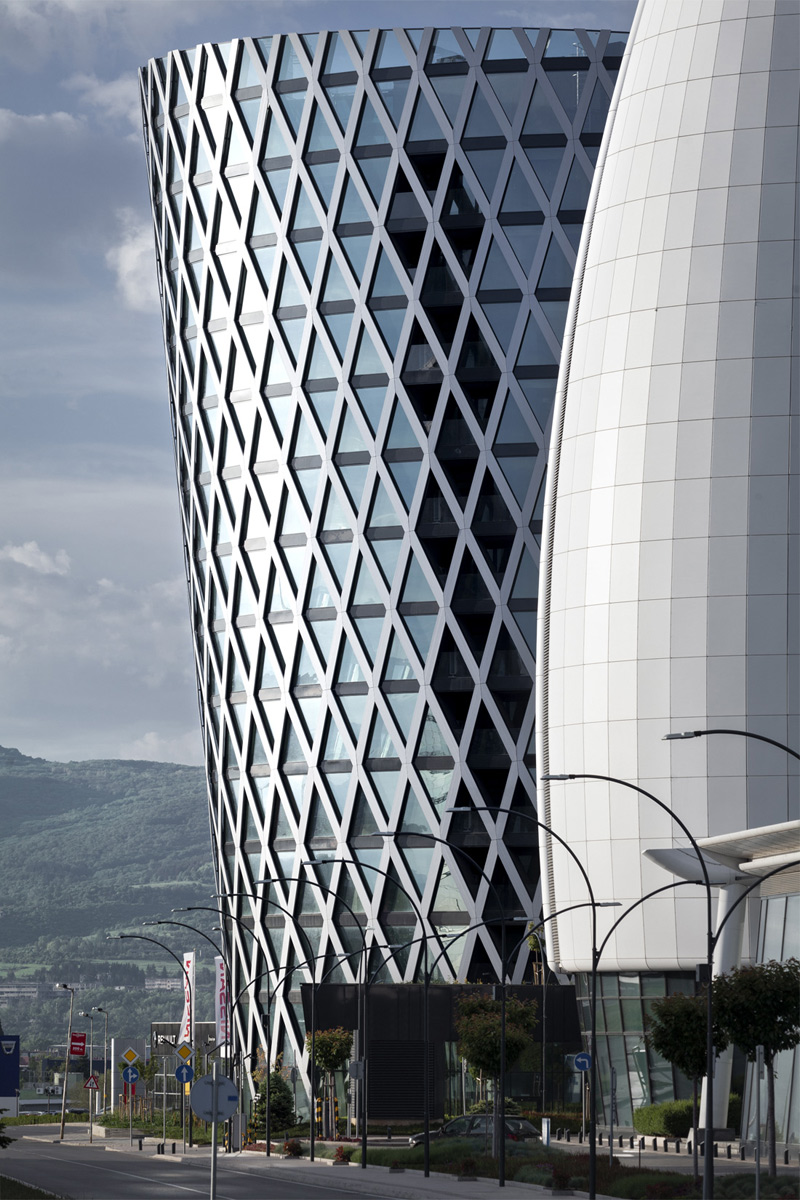 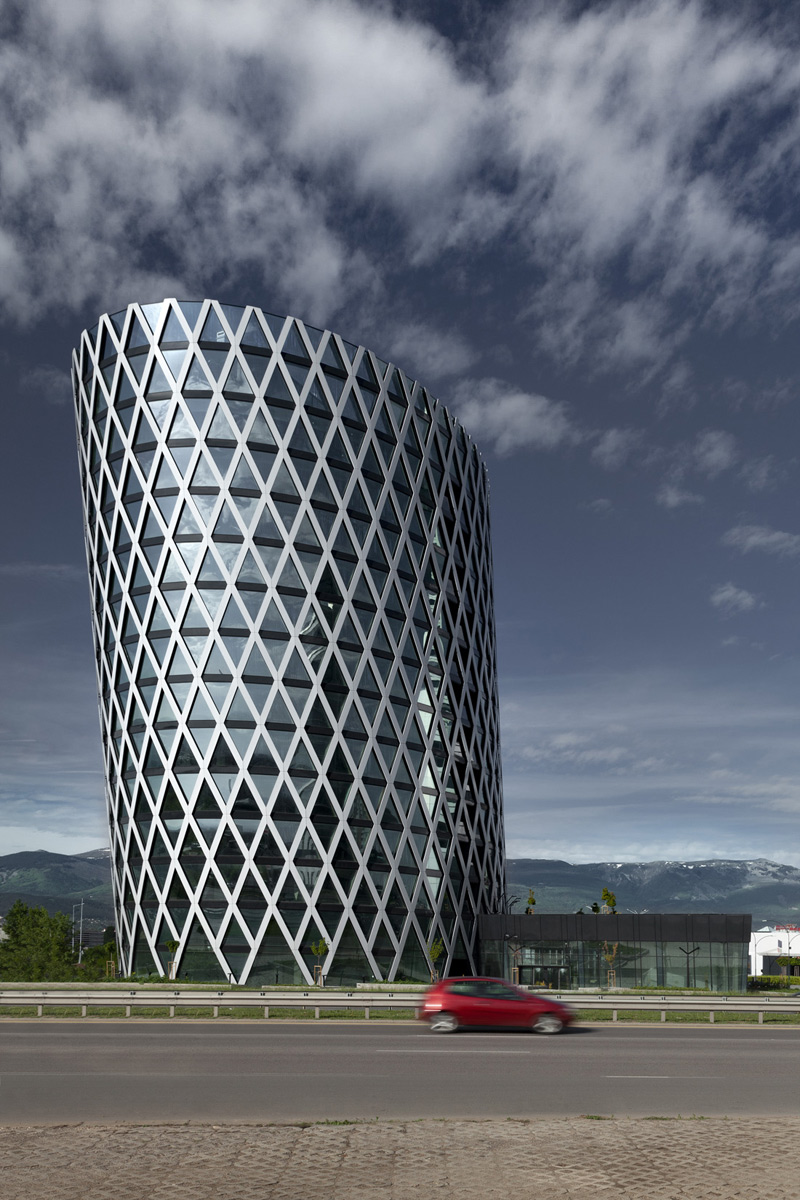 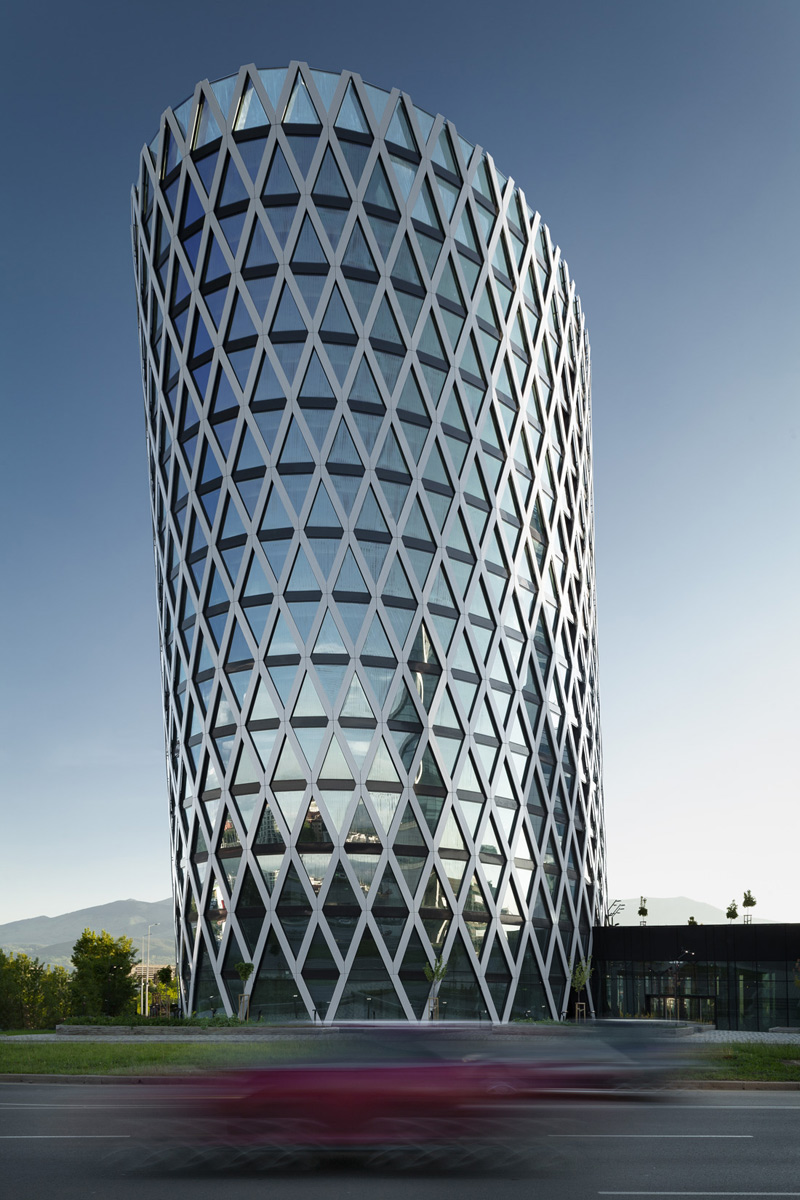 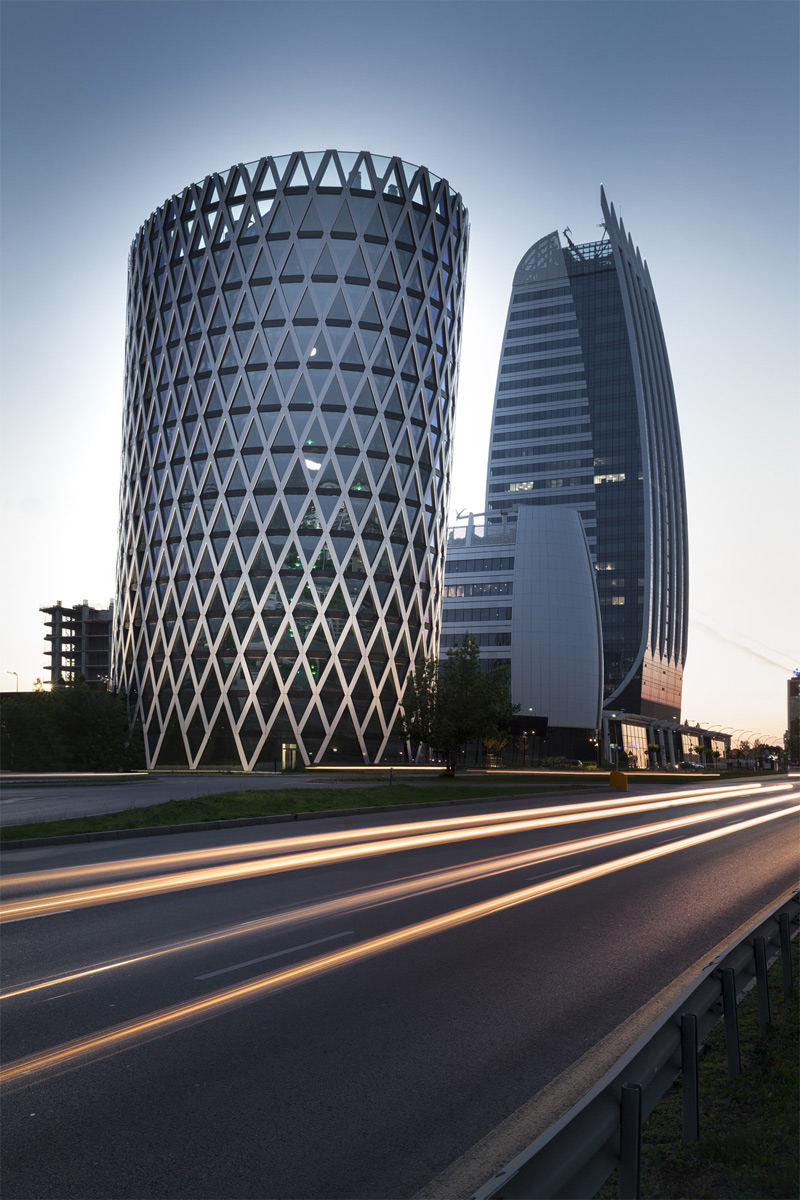 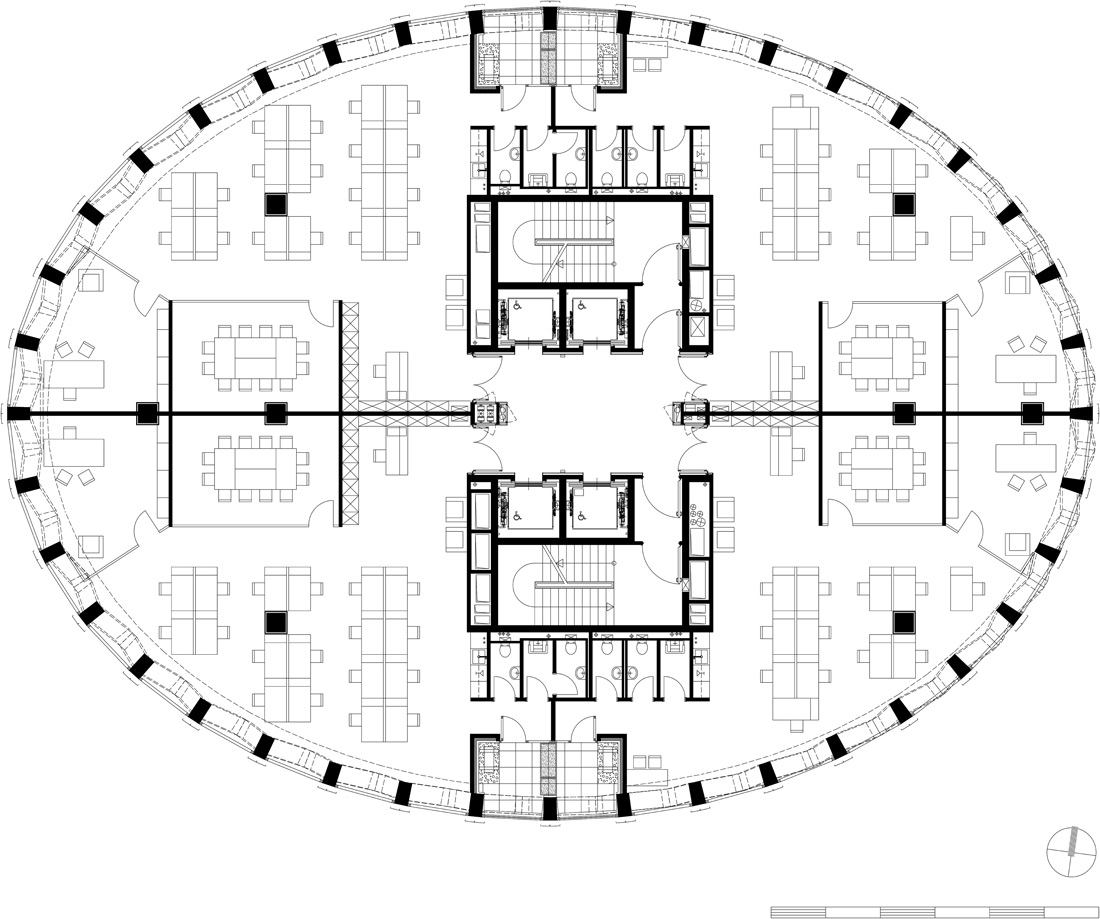 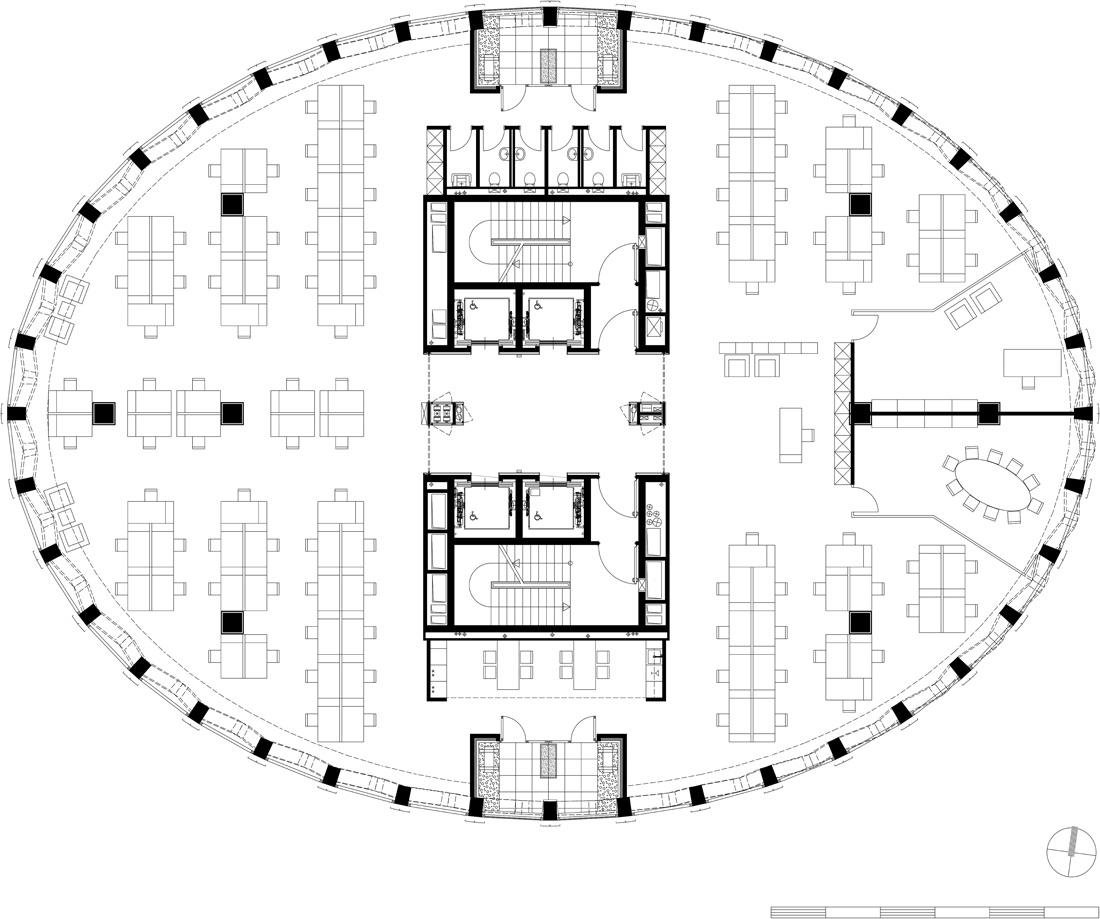 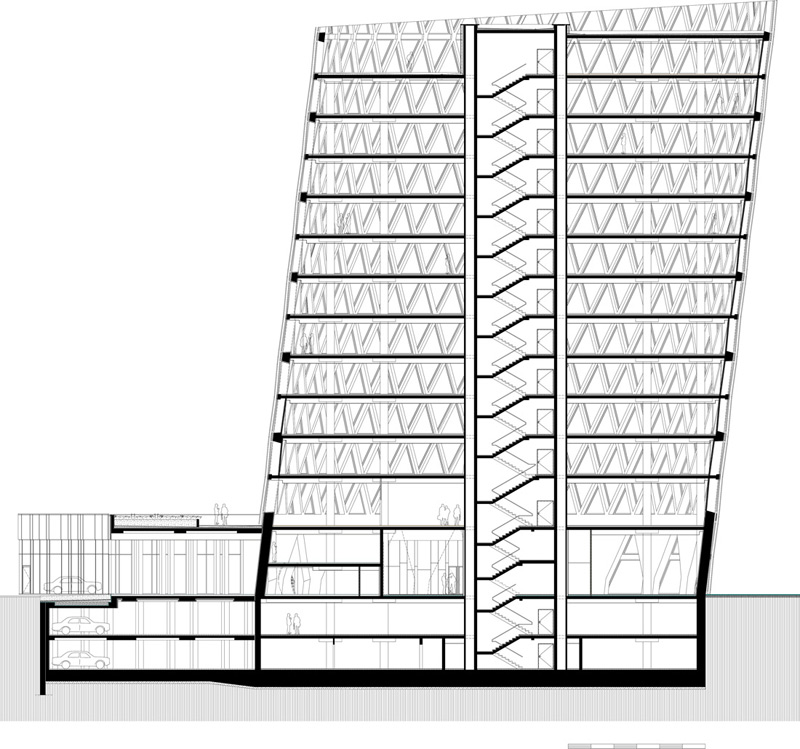 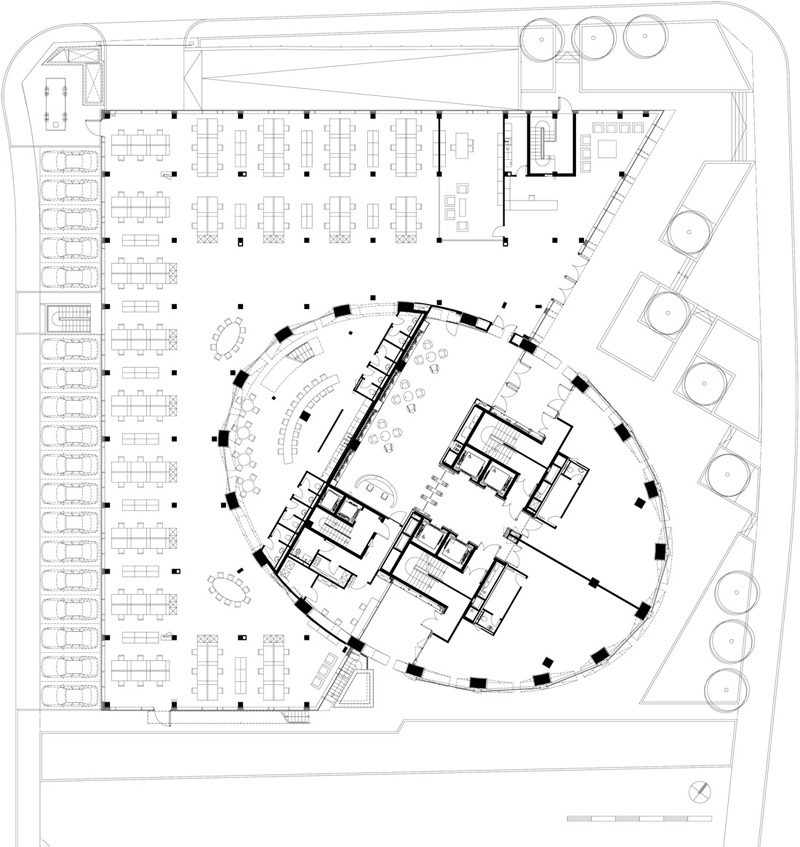 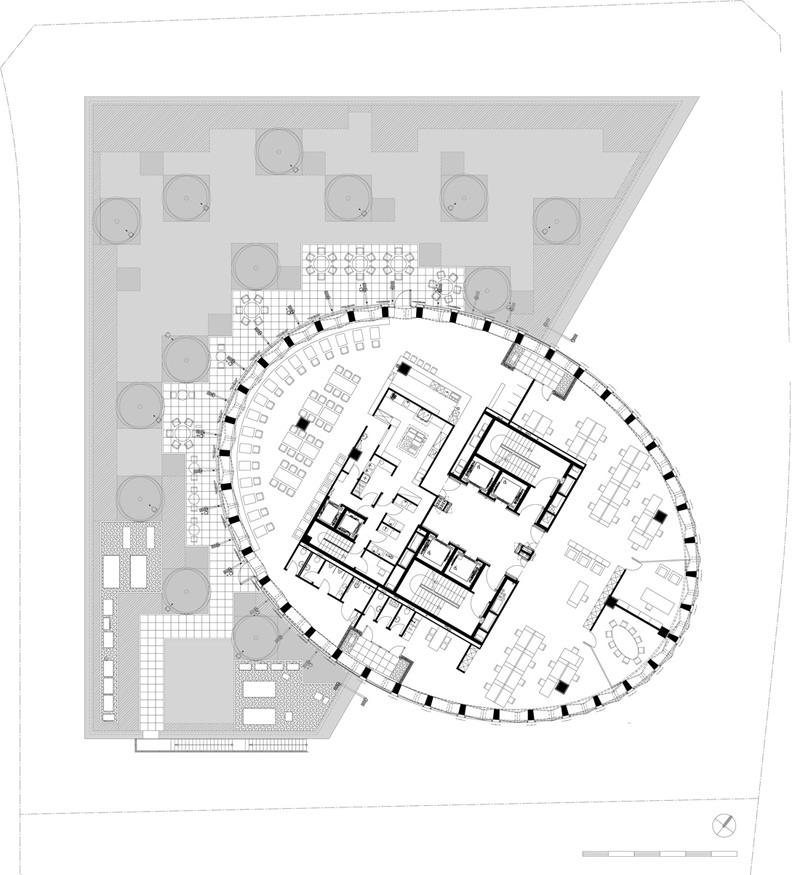