In Rome, a few steps from the Colosseum and the Roman Forum, Condominio Monti (www.condominiomonti.it) opens its doors and soul. Located in the Monti district, the new boutique hotel preserves the convivial atmosphere of the historic neighbourhood, famous for its picturesque alleys, which oozes life during the day through its tiny craft shops and galleries, and by night through its trendy wineries and bars.

The brainchild of bright young entrepreneurs Kaja Osinski and Filippo Ribacchi who are at the helm of Living Roma, Condominio Monti occupies an area of 900 square meters and has been developed within two neighbouring buildings: hence the name, which highlights the intimate collective project, where great attention is paid to shared spaces. 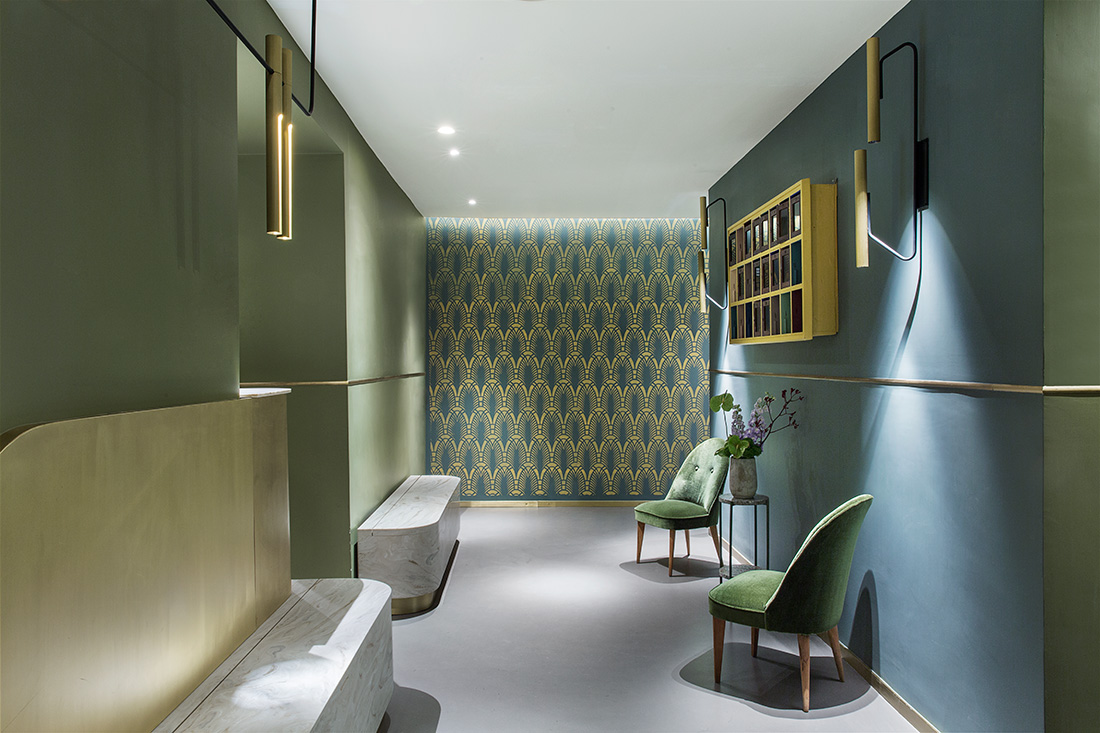 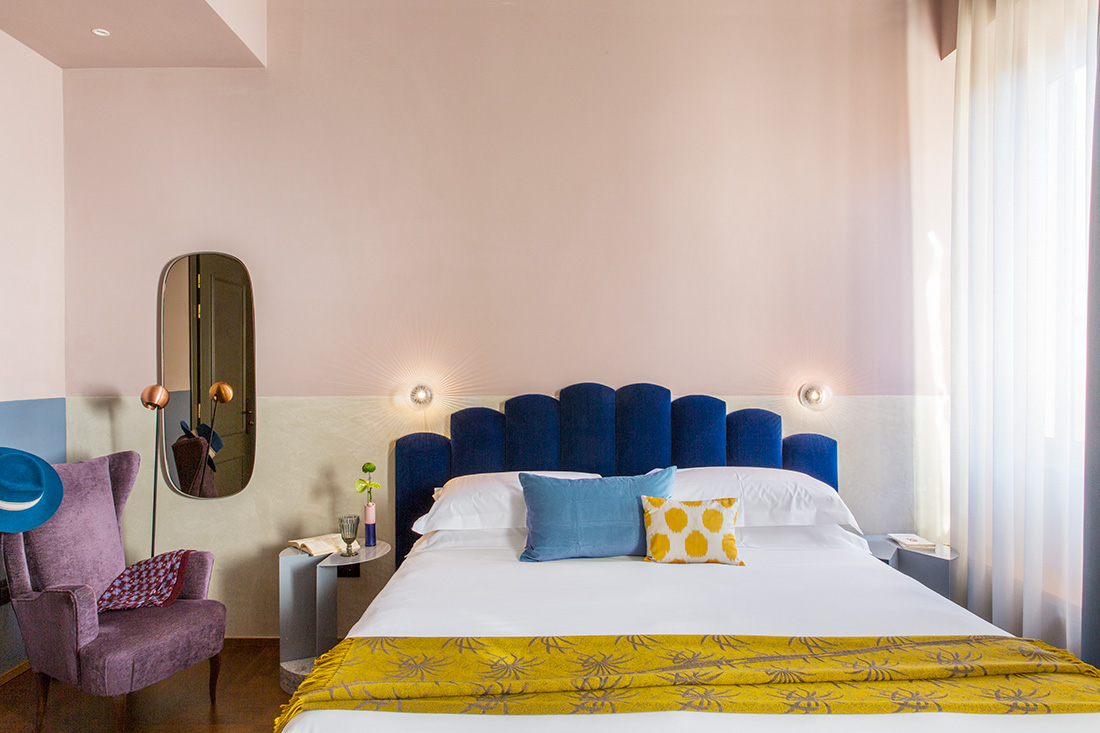 Far from the aseptic standards of major hotel chains, the new structure rewrites the concept of hospitality: in the 33 rooms, designed for selective travelers and design lovers, the reception has a tailored edge. A concierge service based on the guests’ needs, offers suggestions for experiencing the eternal city in contemporary and unconventional ways, with ad hoc illustrated itineraries at guests’ disposal in every room. 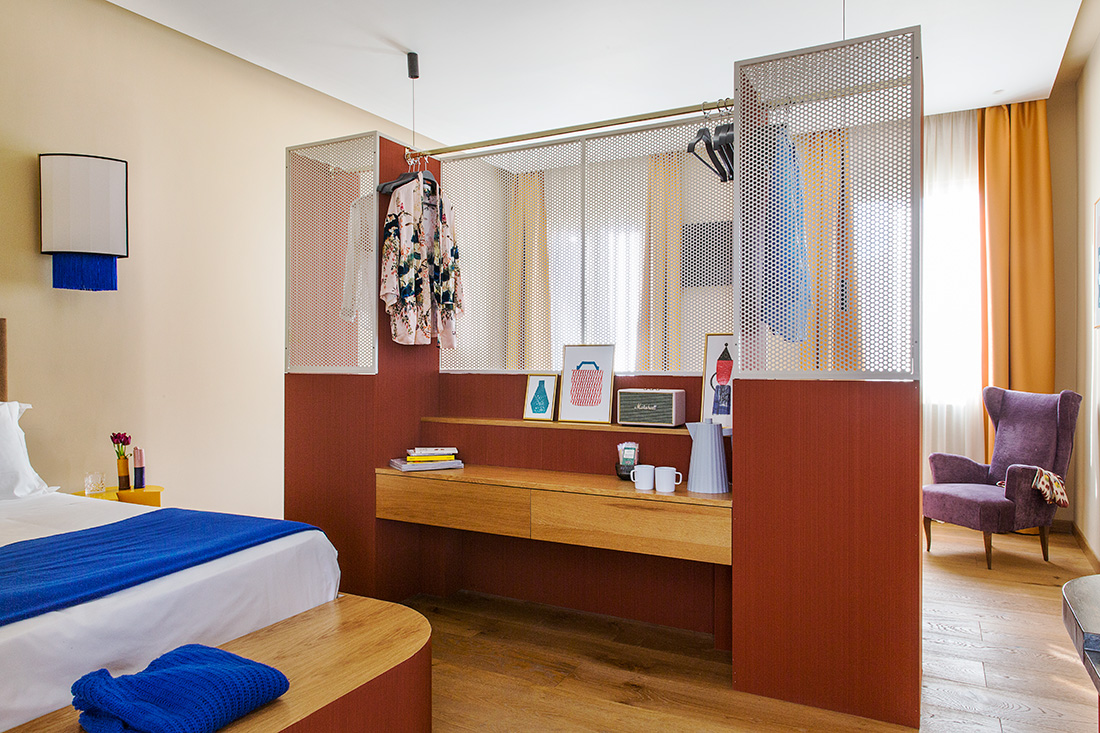 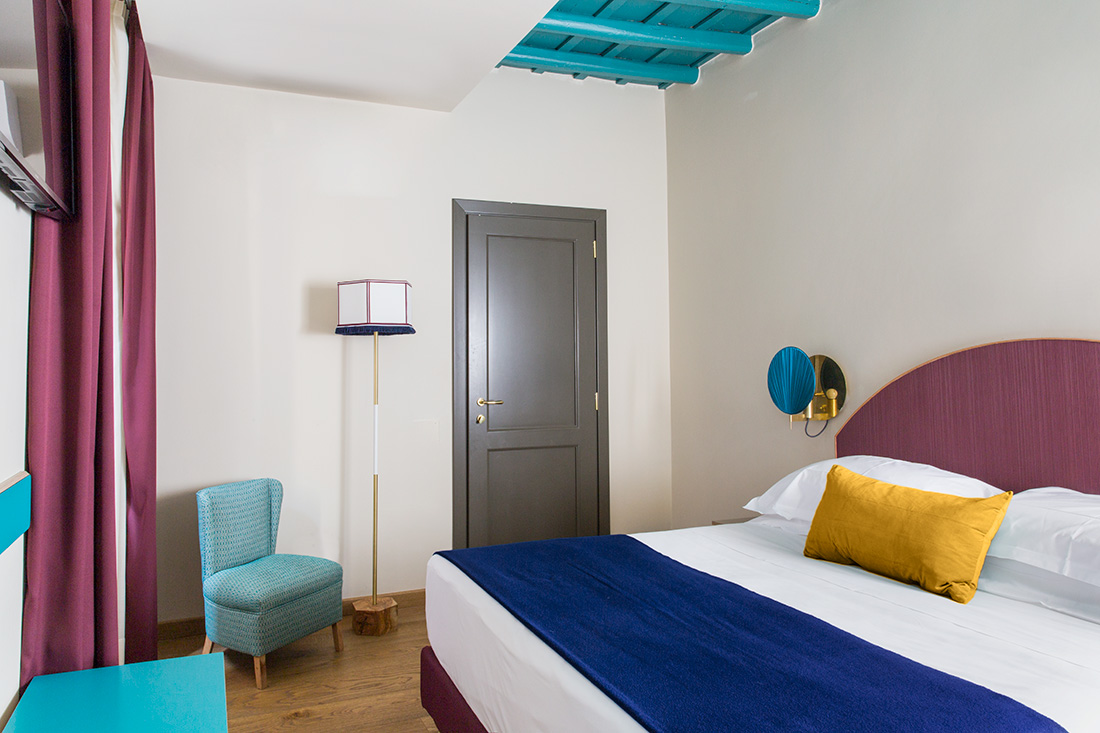 The architectural and interior design, which preserves the structure of the traditional Roman house, with its bijou but functional rooms distributed along a corridor, bears the signature of STUDIOTAMAT. The shades, finishes, fabrics, patterns and objects have been selected by Sabina Guidotti, founder of Bludiprussia.

Balanced lighting and custom-designed furnishings – from bedside tables to headboards – blend with a palette of bold colors, sophisticated wallpapers and decorative patterns that allude to the concept of exotic, intended as a journey to discover “otherness”. 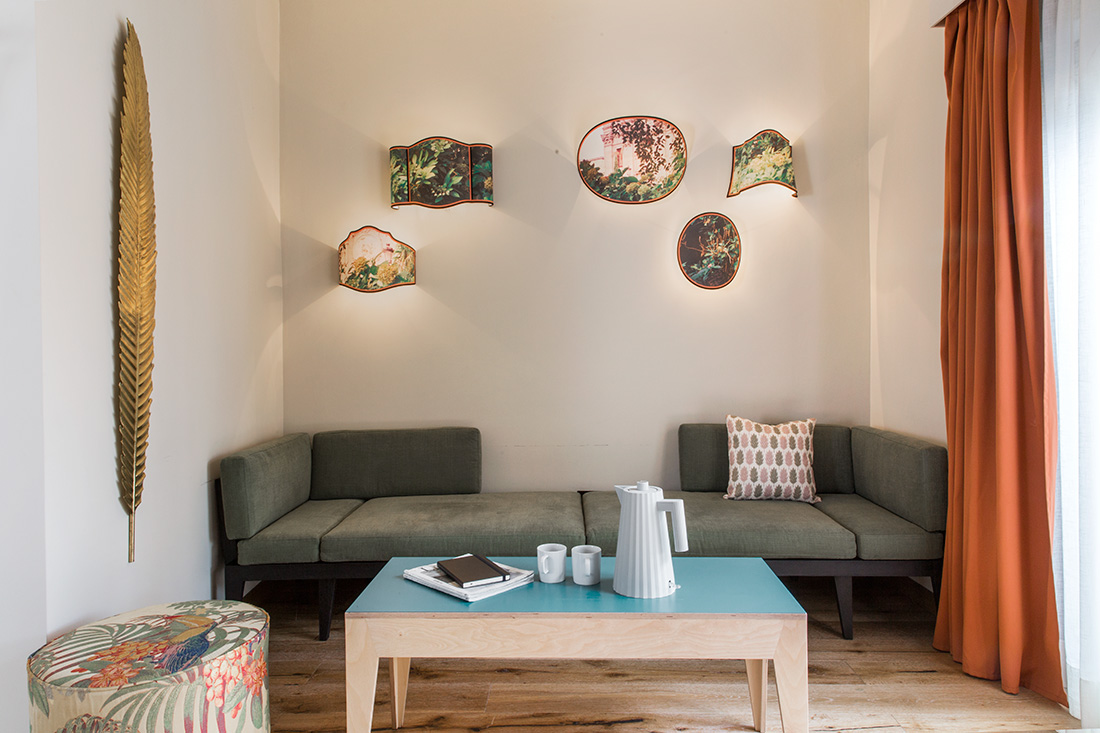 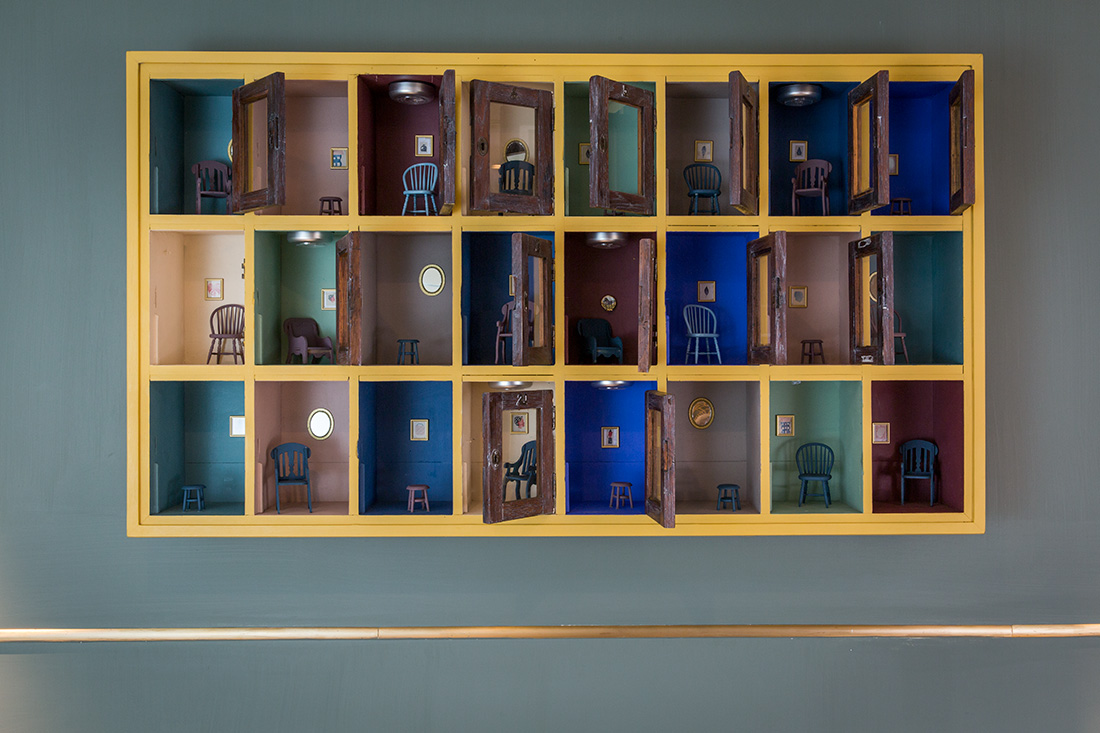 The building located at number 109 of via dei Serpenti houses the reception, rooms of different sizes and the panoramic terrace characterized by a continuous mosaic of soft colors, which also covers the long perimeter seat, surmounted by a green pergola. This is an oasis of peace where hotel guests can enjoy breakfast or an aperitif at sunset, with a breathtaking view of the Colosseum and the apse of the Church of Sant’Agata dei Goti. Next door at number 111, the cobblestones creeps into the building, inviting guests to enter. Inside, a series of independent studio flats, each equipped with kitchen and living room, are characterized by ceilings with colored wooden beams, in harmony with fabrics and furnishings. On the top floor, is the triumphant 45 sqm suite with its private terrace, Roman peperino floor, wooden pergola and refined furnishings.

To enrich the offer of Condominio Monti, and to consolidate its relationship with the neighborhood and its vibrant nightlife, the ground floor hosts the bar-bistrot Magasin and the restaurant Osteria Oliva, led by the Michelin-starred chef Fabio Baldassare. 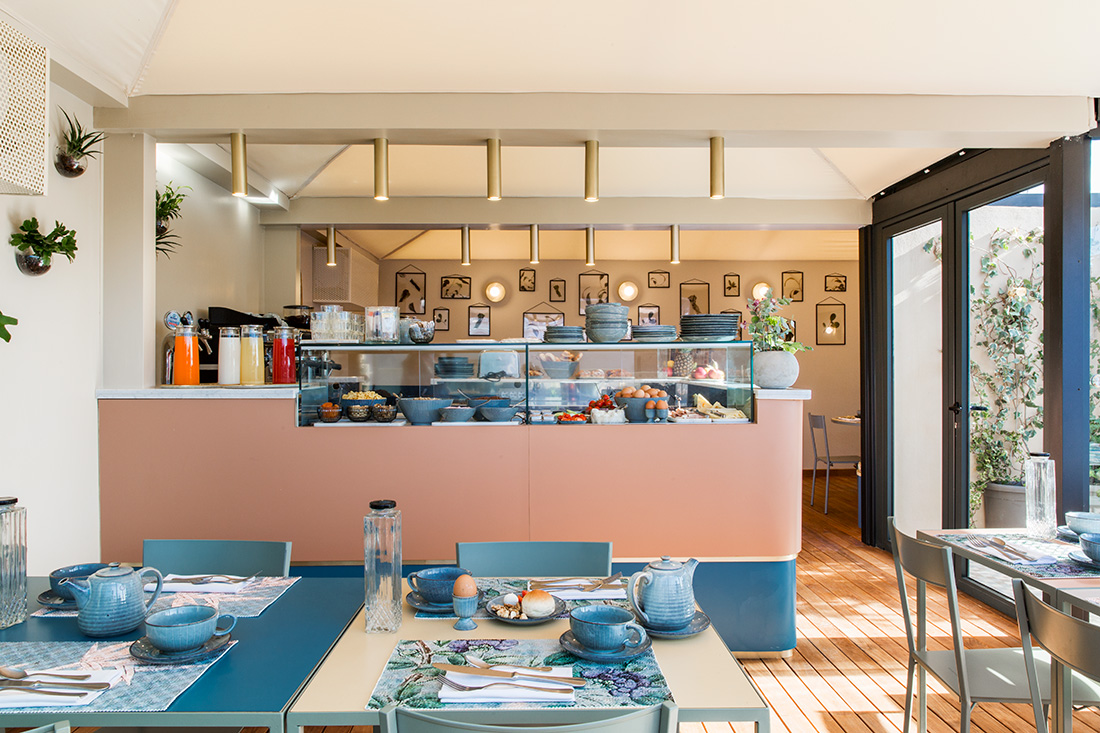 The entire project has been carefully tailored in all aspects, from the three arched mirrors at the entrance, reminiscent of the arcades of the Colosseum, to the irreverent neons inspired by the symbology of the Monti district, and from the MALIN+GOETZ cosmetic products, to the striking Elena Campa prints and the Marshall music amplification systems.

The interior design, combined with the owners’ expertise in hôtellerie, offer a unique experience, brimming with original details and delightful objects to discover, with welcoming shared spaces and rooms with their own personalities, unique yet united, as if they were those of one big house. Condominio Monti is the perfect destination for cosmopolitan visitors who are drawn to out-of-the-box experiences. 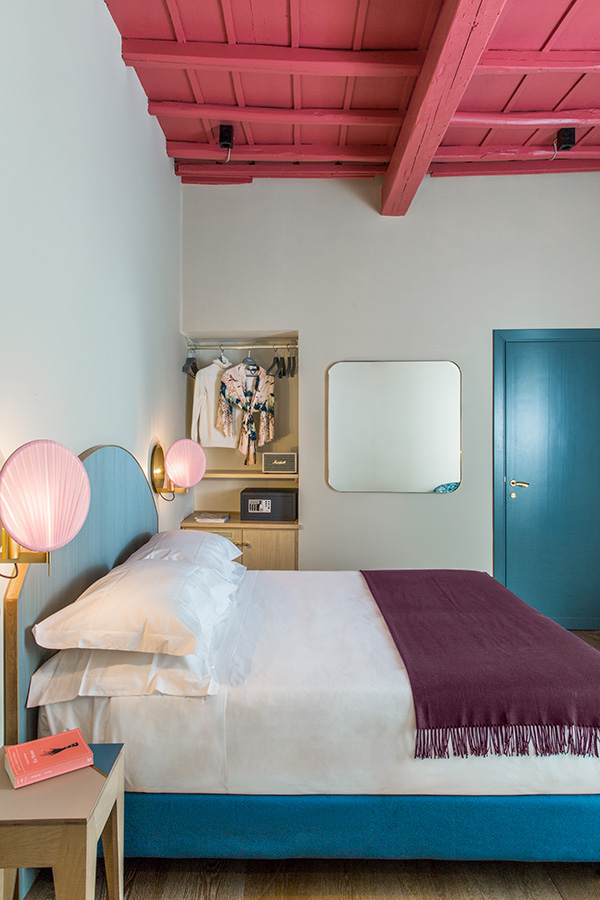 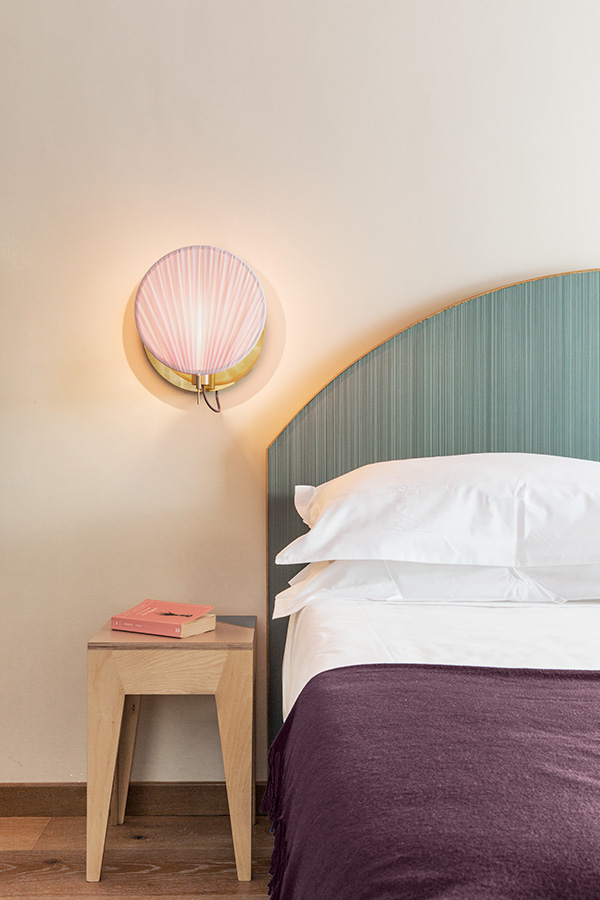 LIVING ROMA
Established in the summer of 2014, Living Roma is a company created by two young partners: Kaja Osinski, who is Austrian and Roman by adoption, and Filippo Ribacchi, a Roman devoted to the touristic sector. The duo’s fascination for the Rione Monti, inspired them to form their company there. Living Roma kicked off with the Salotto Monti project: a boutique hotel with an intimate atmosphere. The design is different in all rooms, and is characterized by an urban chic style. Two years later, the pair acquired the 24-roomed Hotel Apollo in the same district. In 2018, the hotel underwent extensive renovation to become Condominio Monti. Over the years, the company has transformed some of Hotel Apollo’s unused space into the Magasin bar and bistro and the Osteria Oliva restaurant, led by Michelin starred chef Fabio Baldassarre.

SABINA GUIDOTTI
Sabina Guidotti is an interior designer and colour consultant. Active in the 1980s in fashion, and in particular that of the French avant-gardes, the 1990s saw her devote herself to interior paint decoration. Sabina rediscovered and learned the old roller decoration technique, interpreting it in an innovative way to compile an archive of original pieces. The poetry of everyday life, contained in simple iconographies, animates her sophisticated decoration work. Over the years, she has discovered the importance of suitable colour, dedicating her personal research to this specific and important aspect of interior design.

In London, Sabina collaborated with David Oliver, colour guru and founder of the Paint and Paper Library who has become an icon, both in Italy and abroad, to many professionals in the world of interior projects.
In 2003, Sabina opened Bludiprussia in Rome, the first Italian space entirely dedicated to colour design. She’s firmly convinced that the colours of the project are the leitmotif of an original, personalized, unconventional project that pays homage to details.

STUDIOTAMAT
STUDIOTAMAT is a Rome-based architecture and design firm, founded in 2014 by Tommaso Amato, Valentina Paiola and Matteo Soddu, three architects linked by their particular focus on energy and environmental issues, industrial design and the study of detail.

Their design method is based on the search for balance between the usability of space and functionality of materials, and their passion to create atmospheres that redefine the multiple attitudes of everyday living. STUDIOTAMAT is mainly dedicated to residential architecture, interior design, exhibition design and retail. In 2015, the office won the competition for the renovation of a rowing club along the Tiber River, and the following year, it designed the Italian Pavilion for the 67th Berlin International Film Festival.