Casa Tersicore was built in Milan, near the Naviglio Grande. The building is situated on street level on Via Sala, in line with the building to the west, and advances depth-wise into the project lot, in the shape of an “L”. On the street, the body of the building is four stories high, which bends around the corner, and then rises seven stories high in a type of turret, which is a kind of small tower, typical in Milan. The metal frames envelop the turret with a solution of continuity on each side, so that the volume can be read alternatively as a unit or as a single partition of it. Similar solutions of continuity also characterize the design of the frames on the third floor set back from the street. By changing the point of view, or when you are on the top-floor terraces enveloped by frames, you have the impression of being inside a very transparent interior or outside but in a sheltered setting – in any case, in the open air.

What makes this project one-of-a-kind?
Casa Tersicore is part of our research on modern Milanese buildings, developed both in new projects and in the analysis of emblematic precedents. Casa Tersicore is therefore both a development and a critique of previous Milanese buildings, like the following residential buildings: Via Fatebenefratelli by Mozzoni and Ghidini, Via Lanzone by the Latis brothers, Via Anelli by Giancarlo Malchiodi, viale Beatrice d’Este by Perogalli and Mariani, among others.
Casa Tersicore is designed in a subtle way with delicate details while presenting minimal and clean visual effects. The persistency of some features found in Milanese architecture is criticized, while they are experimented. For instance, the use of uniform modules for the architectural elements is diversified through some strategy. The decorative suspended pilasters (lesene) of the loggia (second and third floor), 15cm thick and variable in width, are designed in a slowed perspective (prospettiva rallentata), so that on the long side viewed from the street they appear equidistant because of the perspectival view, while in reality their intercolumniation is progressively greater as they get further away from the street. The loggia is overlaid with slender metal frames, with a 6cm side square section. The frame modulation is uniform and therefore inconsistent with respect to the incremental rhythm of the decorative pilasters of the loggia. An ideal continuity can be mentally reconstructed by projecting the lines in the intervals between the parts of the frame, like the altanella positioned on the corner.
In this way, Casa Tersicore belongs to the Milanese tradition, as well as it is a step of its overcoming. 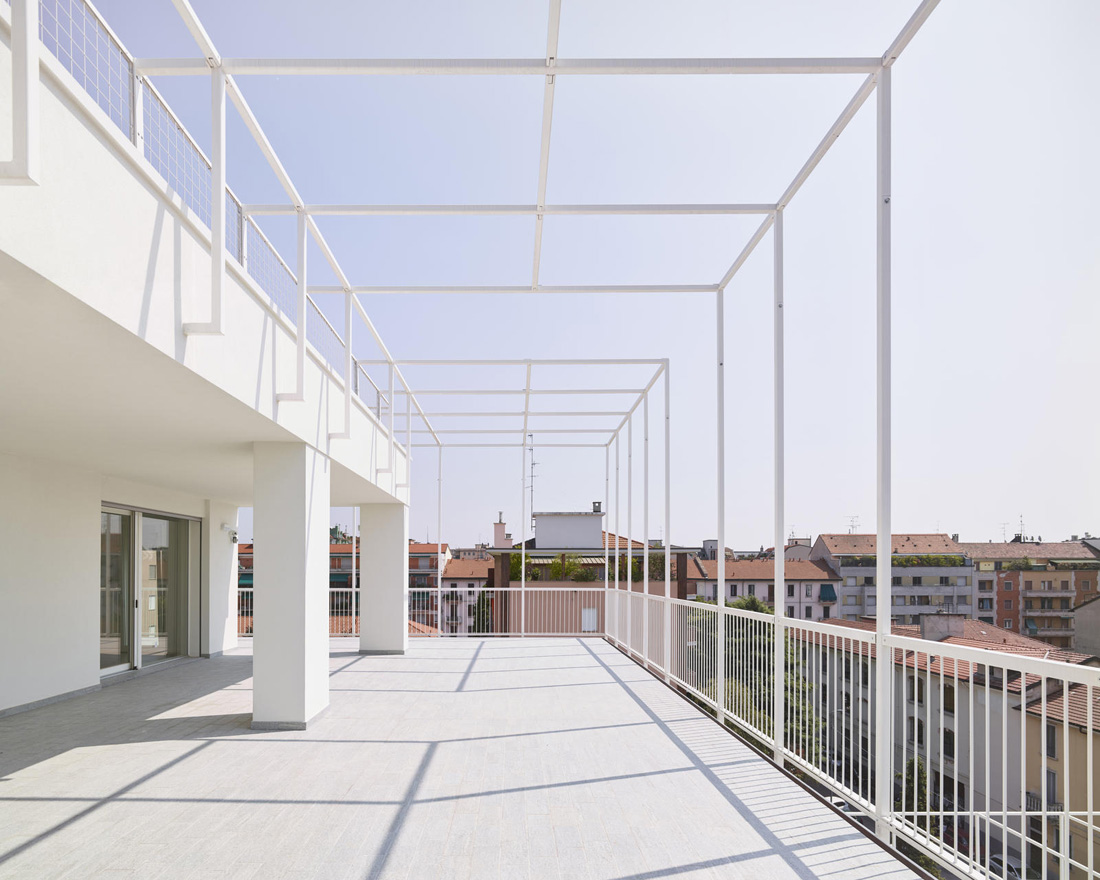 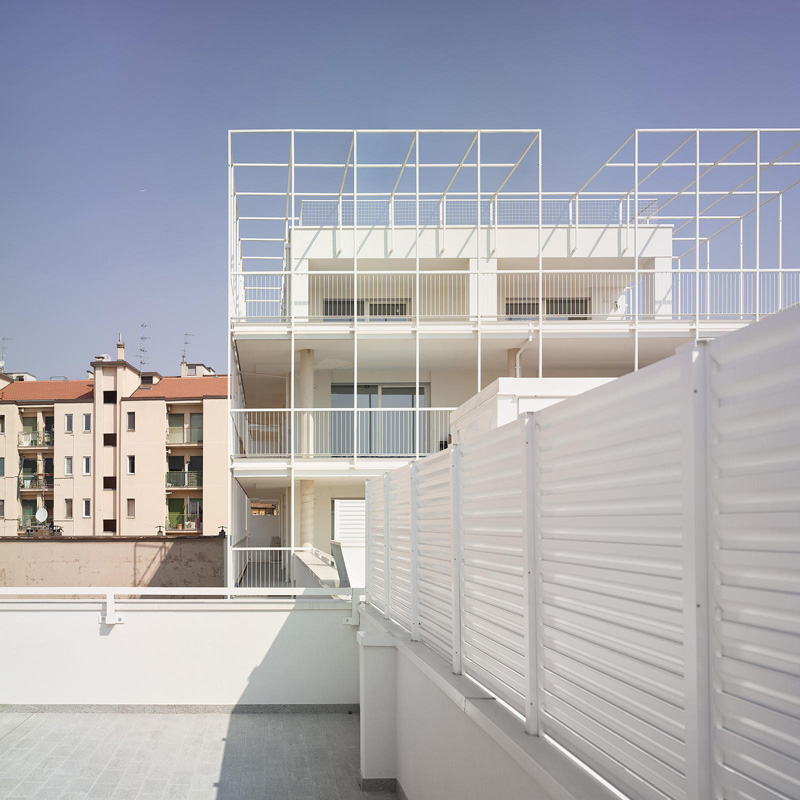 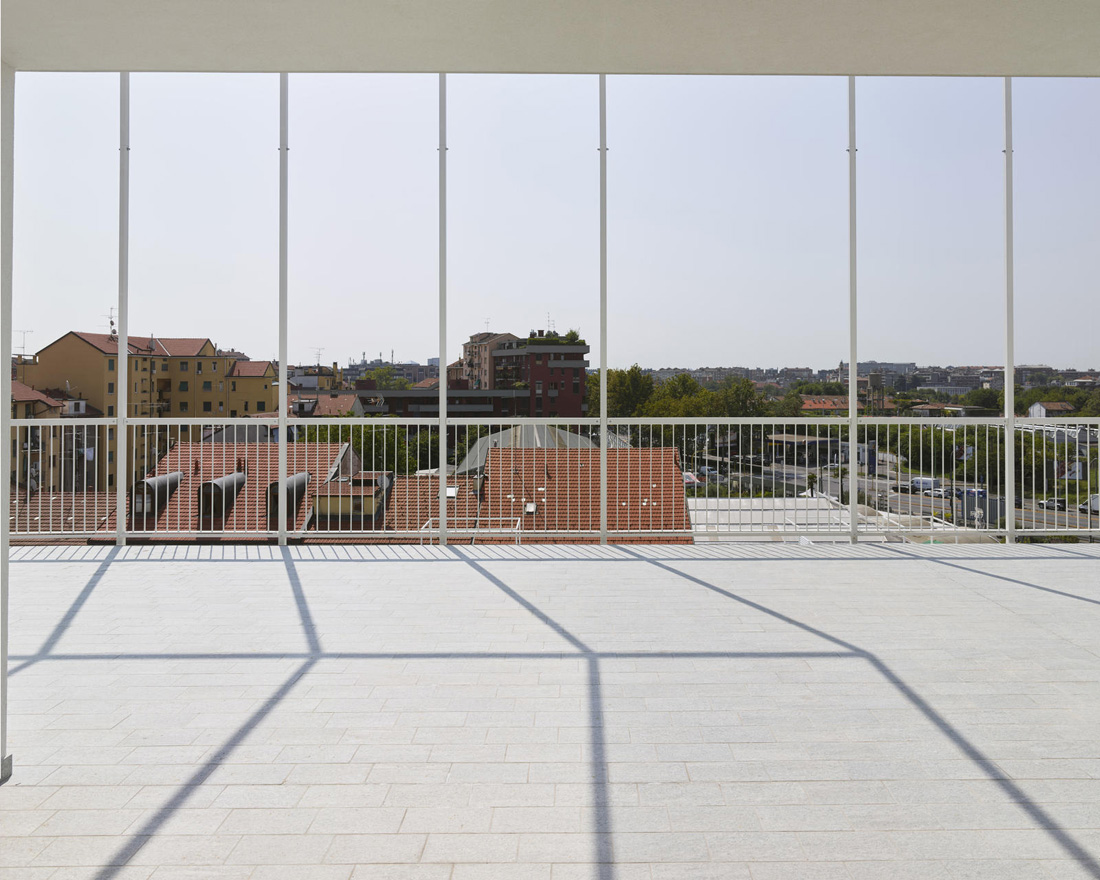 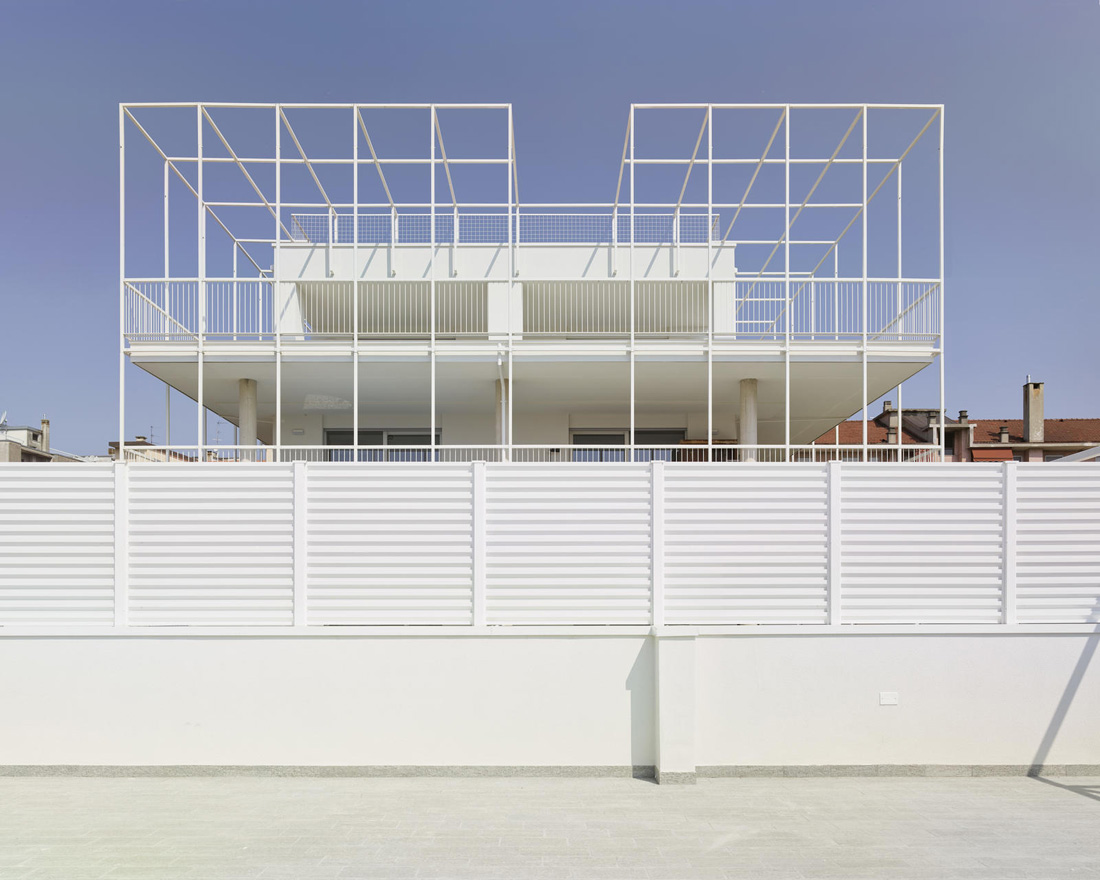 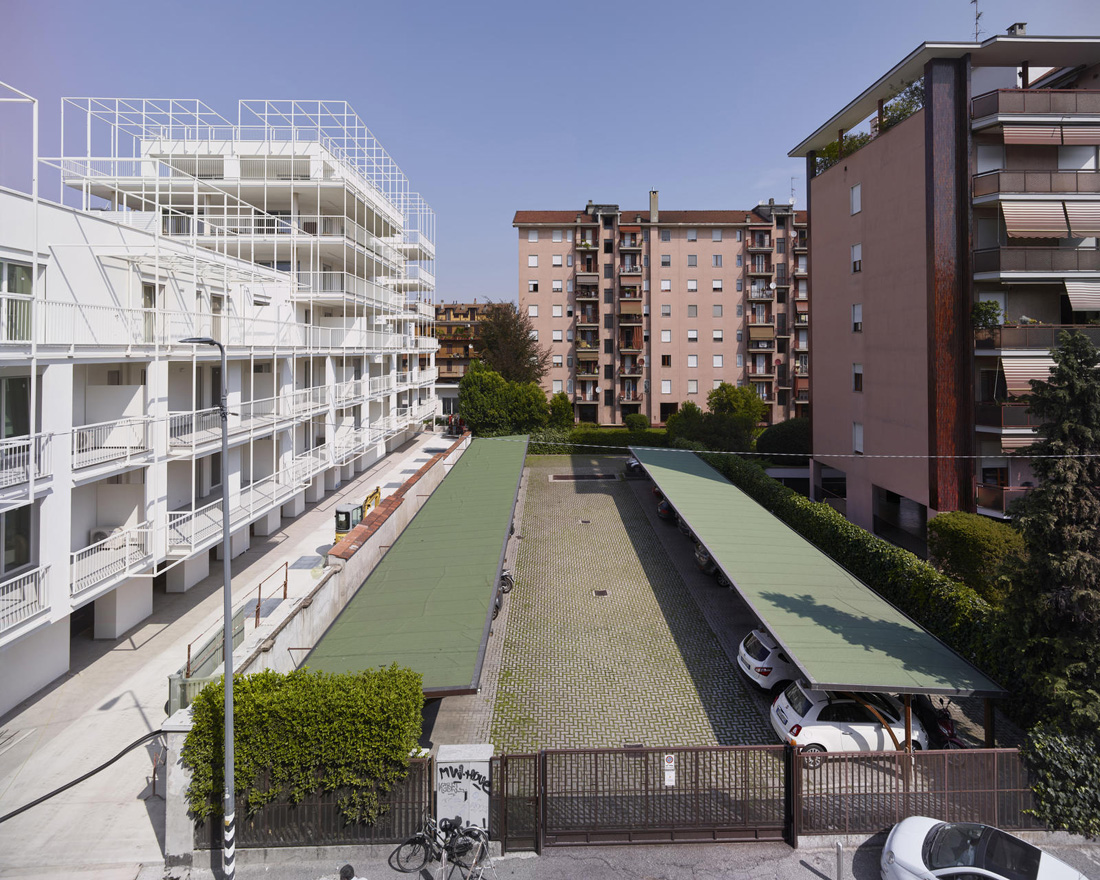 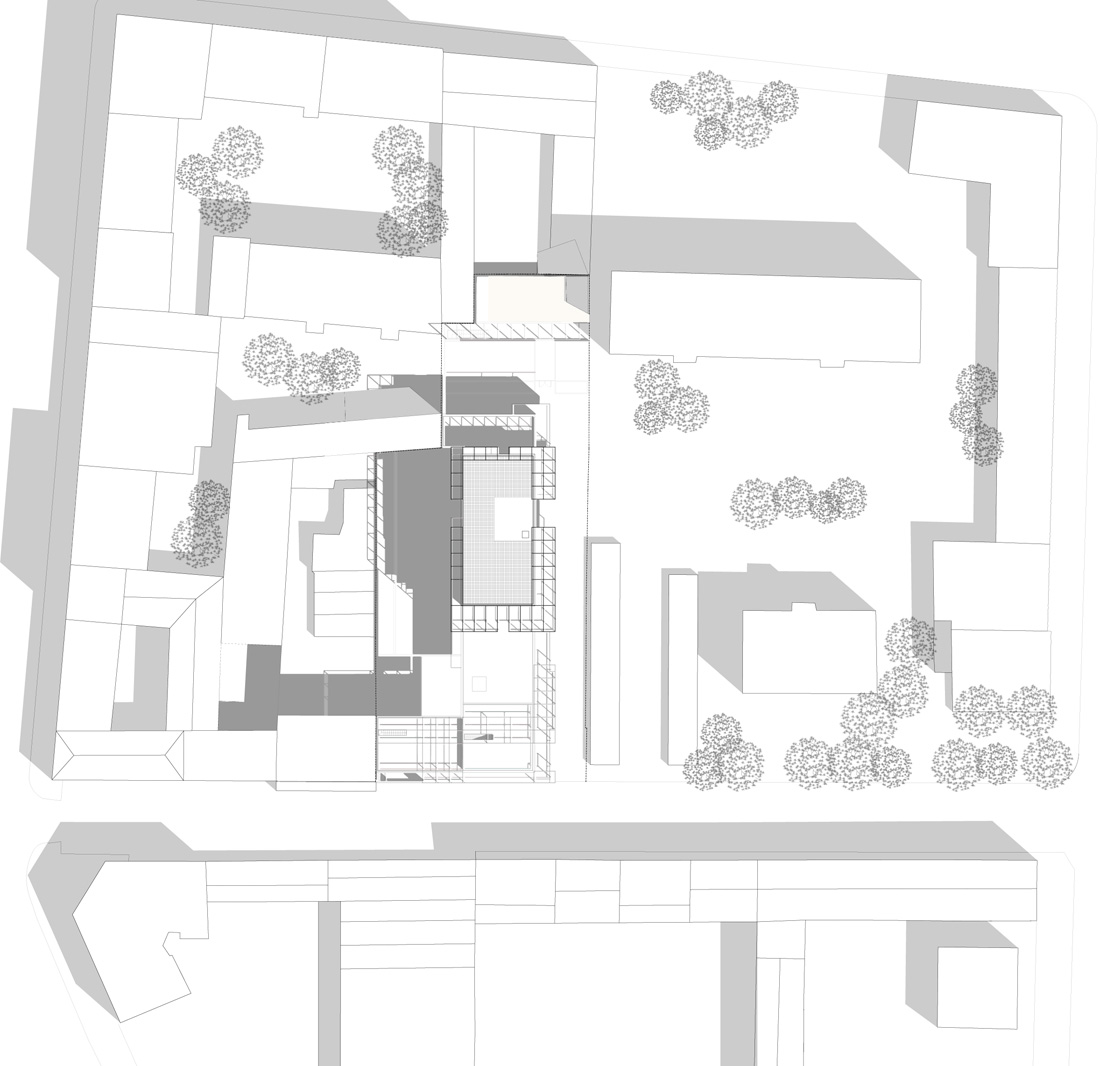