Why women love Žižek (and why men hate him even more)

Steven Hawking entitled his last book On the Shoulders of Giants. He borrowed the title from Issac Newton, who once said that if he had been able to see farther, it was only because he stood on the shoulders of giants. The same goes for philosopher Slavoj Žižek, who laid the foundations of his studies on the shoulders of Jacques Lacan.

In an attempt to answer the opening title-question – Why women love Žižek (and why men hate him even more) – we can refer to the case the celebrated psychoanalytic theorist Jacques Lacan found in Saint Augustine: “ … the little child seeing his brother at his mother’s breast, looking at him amare conspectu, with a bitter look, which seems to tear him to pieces and has on himself the effect of a poison. In order to understand what invidia (envy) is in its function as a gaze it must not be confused with jealousy. What the small child, or whoever, envies is not at all necessarily what he might want (avoir envie), as one is inclined to (improperly) put it. Who can say that the child who looks at his younger brother still needs to be at the breast? Everyone knows that envy is usually aroused by the possession of goods which would be of no use to the person who is envious of them, and about the true nature of which he hasn’t the least idea. Such is true envy; the envy that makes the subject pale before the image of a completeness closed upon itself, before the idea, … from which he is hanging, may be for another, the possession that gives satisfaction. 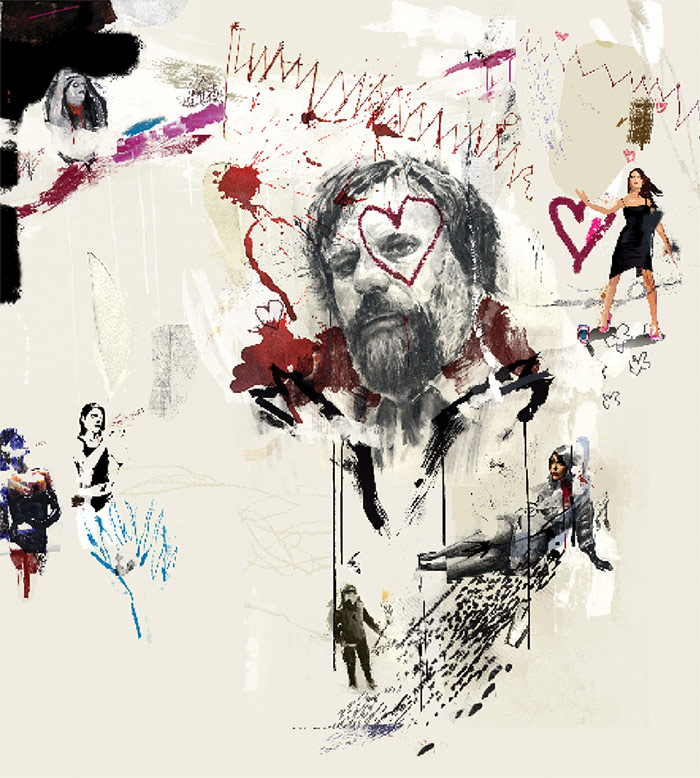 This quote is an excellent introductory illustration of the attitude women and men have towards Slovenian philosopher/cultural theorist Slavoj Žižek. Lacan’s main focus is on the fact that what the child envies when he looks at his little brother at the breast is not at all necessarily what he might want, since he no longer needs to be breastfed; our envy is usually aroused by the possession of goods which would be of no use to us, and we do not have the least idea of their true nature. The common denominator for the love/ hate towards S. Žižek is foremost focused on the concept of envy. Invidia (envy) comes from videre (to look), says Lacan, setting the minimal structural theme to introduce the gender differentiation between a woman and a man. Therefore, this initial explication should be put in the oppositional attitudes of women towards Žižek and then to the attitudes of men towards Žižek.

In a public setting, Žižek always presents himself according to the way we perceive him, always taking the position in this picture, which from the prospective of a viewer or a listener, represents a point of satisfaction which is not experienced by those of us who watch or listen. He always seems to be literally ‘sucking’ from a source of something, with the effect that he ‘communicates’ the notion that it is his personal pleasurable experience. There is not a single lecture, media appearance or essay that does not convincingly express this. But what is he really trying to show? Most certainly some mirror-like image of one of his many books (over one hundred published already) – the one entitled Enjoy your Symptom. Before taking another step further, however, let us take another look at our baby at the breast.

From our point of view the baby expresses a certain duality from the position he finds himself in. According to Freud the situation could be described as an opposition between active and passive. On the one hand, we have a frail being constantly in demand of nursing and care, who is at the same time passively left at the tender mercy of another being; on the other hand, he is also the one convulsively clinging to the source of survival and relentlessly suckling at the partial object on the body of what he perceives as a larger organic entity, commonly known as the mother. This ‘active’ phase of his life without any special imagination places him within the family of vampires who cling to the organ from which they draw the vital nectars. To sum up: the duality of this proto spectacle which we observe is expressed in the absolute frailty of the small child on the one hand; and, on the other, an intuitive capacity of this small being to hang in there as a vampire. At the intersection of two entirely incompatible activities of this small being we find the source of what the observer experiences as envy, because the baby is given a satisfaction that shall remain closed or inaccessible to us forever.

It is precisely this point of intersection that is presented or staged by S. Žižek time and again. Needless to say Žižek is never to be found in the role of a frail child (though he might sometimes appear to be precisely) nor in the role of a vampire (though we might sometimes be tempted to claim so), but rather in the function of the intersection between the two; this is something entirely different and it places him within the family of beings that could be illustrated by the holy-cursed opposition, or in the words of our opening opposition, within the family of the intersection between love and hate. This is what makes him and us alike. However, there is a slight difference worth mentioning again; namely, at this love/hate intersection there is always someone capable of carefully handling what in analysis we call the transfer; in this way he never slips over to the love-only side (of love for himself or others love for him) nor to the hate-only side (hate towards himself or others’ hate towards him).

In analysis the transfer sprout means the necessity of analysis on the one hand, while on the other hand this sprout brings along numerous difficulties; it is precisely this capacity to ‘handle’ the transfer or to function within the transfer what (among other things) authorizes the analyst. It is precisely the skill of managing and handling a field, that is completely concrete in all its apparent abstraction that S. Žižek nourishes with care every step of the way. Even if this word combination ‘to nourish with care’ sounds somewhat mild, I insist on it, because it comes in handy especially when love unexpectedly turns into its opposite – hate. You should not be mislead by the implied tenderness of the word combination, because ‘nourishing’ the transfer management technique ‘with care’ does not exclude the possibility and sometimes even the necessity to express himself in an apparent brutal austerity.

The difference between the transfer as an ‘artificially triggered’ love and love as a spontaneous human affection lays in the fact that in the case of a transfer we also become aware of the other side of love that is actively overlooked when it comes to a common understanding of love, that is, hate. Love is always made known in the function of deception. Lacan says: “Having convinced the other that he has what we lack and what can make us complete, we have convinced ourselves that we can continue to overlook precisely what we lack”2. In true love there is always an overlooked remainder, which in the end manifests as hatred.
Precise management of this intrinsic duality of transfer is one of the central distinctive features of Žižek, popularly perceived as insane, yet at the same time full of genius.

So then, why do women love Žižek and men hate him even more – where does this ‘even more’, unexpectedly turn into a concealed hatred on the male side. Let us repeat: Žižek is neither a frail holiness of a baby nor the curse of a vampire; he dwells in a kind of a “no man’s land” between the two. The position he cautiously takes time and again gives women the possibility of seeing in him a person that gives them a chance to see themselves as an object of desire of somebody else, not as an object of somebody’s pleasure; therefore, not as an object the baby urgently needs to survive nor as an object the vampire is going to consume for his own pleasure; he enables them to take the position of somebody who is loved by his look, which in the end is the look of a woman looking at herself. Should she find herself in this desired position of an ever unsatisfied desire, desiring to take a step further, straight into the arms of the vampire … this is a whole other story for some other occasion.

What about men? Men love him even more, because in their eyes the position taken by Žižek every time gives them access to the lost object of pure satisfaction, which allegedly they lack and it seems they lack it because in their opinion this same position was taken by the master himself – Žižek. That is why I say even more – they identify with the position Žižek takes, making him the One preventing them from taking that position. Therefore, for men, Žižek remains the one who outruns and defeats them in relation to the partial object of satisfaction. At the risk of hammering home the point (or not!) – there is nothing but a male phantasm standing precisely in the place of their own self-obstruction, because Žižek is not outrunning and even less, defeating anyone; he is only intensively involved in the work of an analyst.