Urban concept
The project in question is a reconstruction of an old building that used to constitute a part of a set of farm buildings nearby a residential building in a village as part of a classic countryside setting. It belongs to the original historical built-up area of the village of Konice. 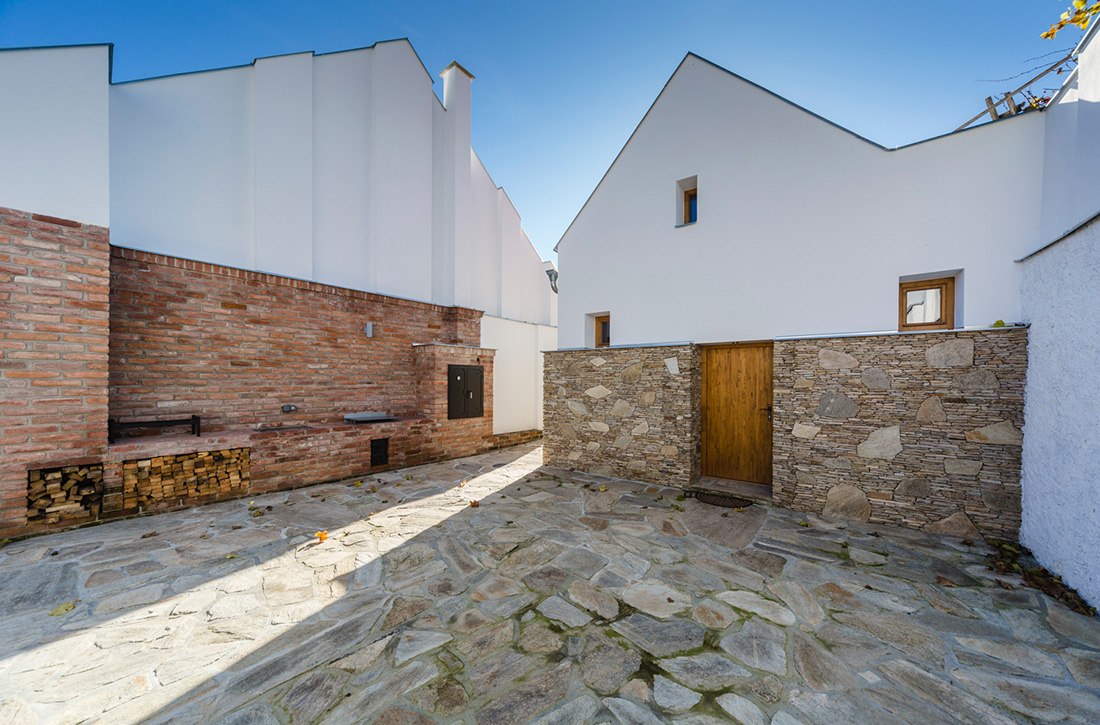 Architectural design
The key purpose of the entire proposal was to use, wherever possible, the original, quality old materials or technologies in order to try to reincarnate the spirit of the old objects in a new modern form of the 21st century.

The building used to serve as both a press shop and entrance to old sandstone cellars at the same time. In the proposal, the production function of the building was changed into a common room for the cellar. The spatially small ground plan did not allow for any major redevelopment; it only contains a common room and a small sanitary facility. 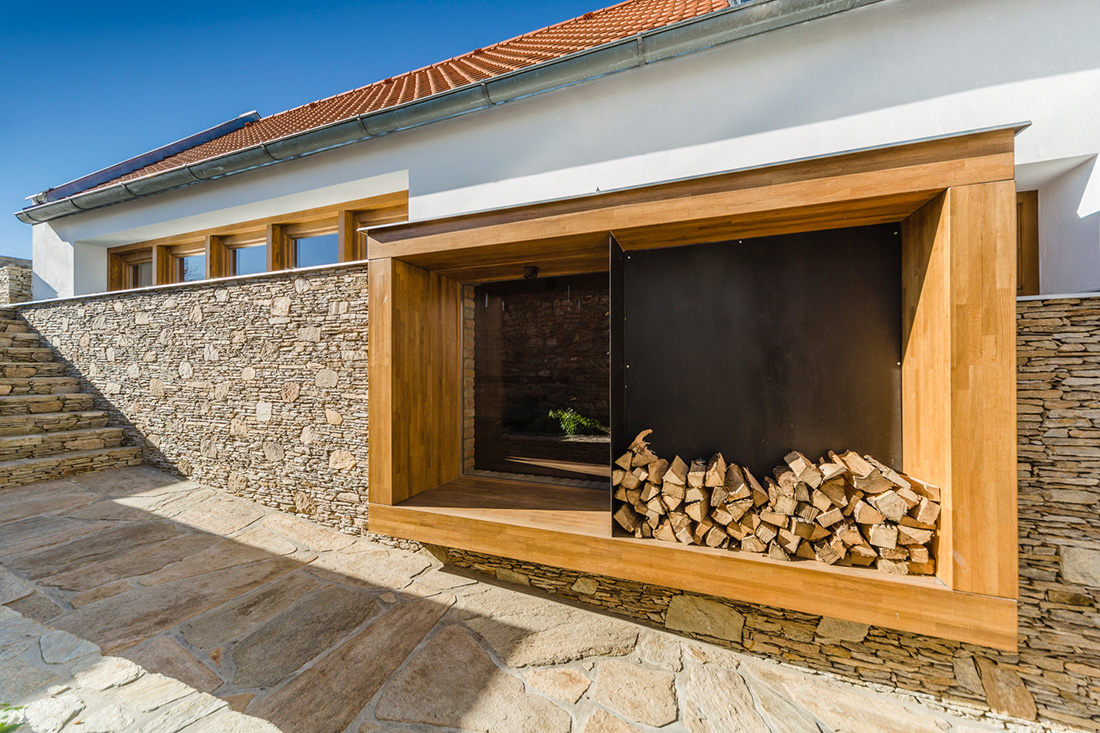 Exterior
Architectural design of the exterior is simple – the white body of the building rests on a dry stone foundation made of folded stones, the roofing is a classic roof with a traditional slope and material – plain tile. The stones of the foundation were used from the fallen buttress wall; the plaster is classic, lime, painted on the wall without insulation. The facades, windows and doors are composed in the golden section with a mutual geometrical connection of the diagonals, sides and the ratios between them. 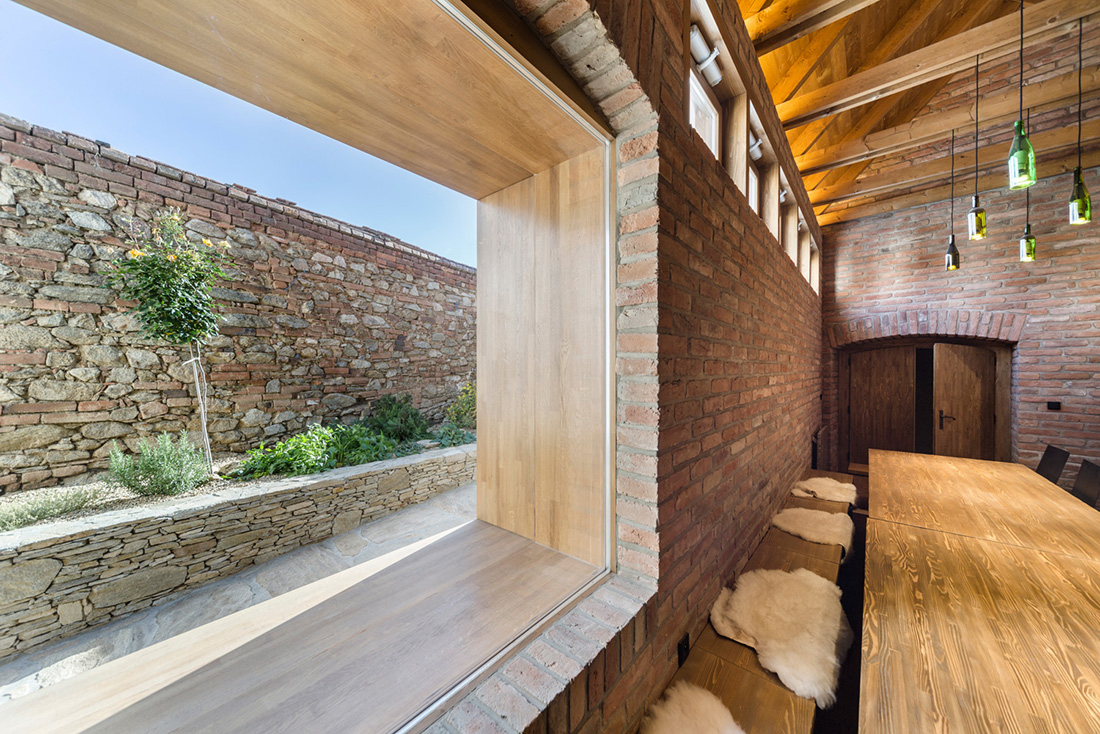 Interior
I did not use plaster in the interior on purpose, since the main material is an old brick, which panels all perimeter walls and provides matter for partitions and floor. Old, original bricks with a historical footprint were acquired gradually from demolished buildings in the vicinity.

In the interior, the overhead temple lighting was designed by the window under the roof providing a view of the roof structure. There is only one other window in the side wall (with an outward view of a tree rose) that has been designed to serve as an image rather than a classic window. Attic and spruce plank decking are highlighted by artificial lighting. Fireplace clad with Corten sheet metal was designed for heating. The interior doors are all handmade by a carpenter with forged handles from a blacksmith’s based on older design. 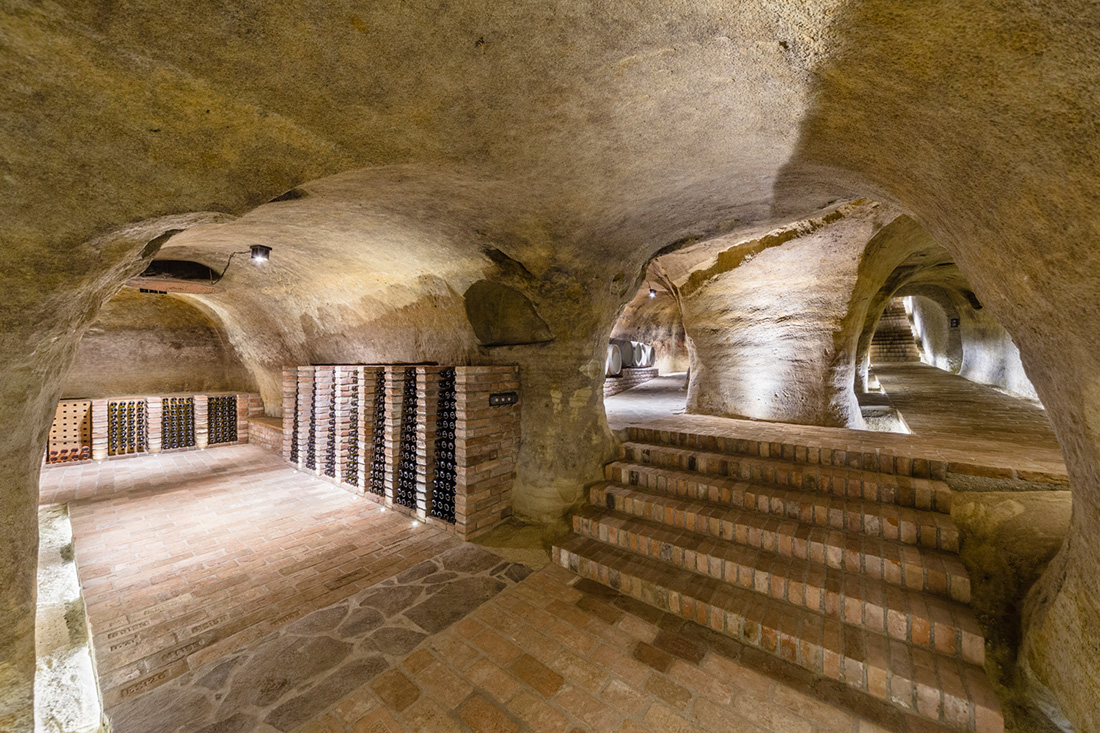 Cellar interior
Inside the cellar I worked with brick, stone and artificial lighting. Plaster was used in a very limited way in place of demolition of the entrance hall only. Solid geometric shapes of pavements and wine cubicles are designed from bricks. Lighting has been integrated into the pavements. The connections between them are made of loose stones.

Interior lighting contains a number of independently switched circuits in order to allow adjustments of the inner atmosphere of the cellar. 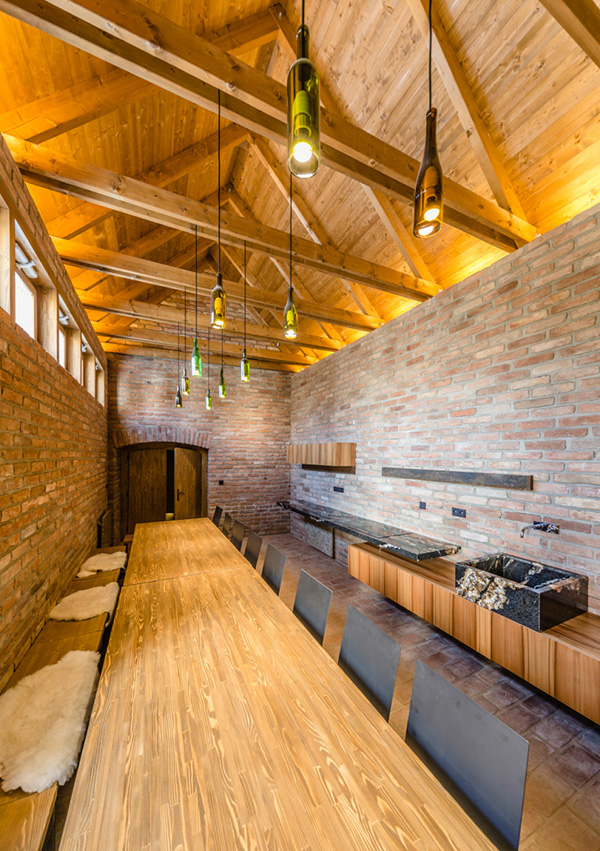 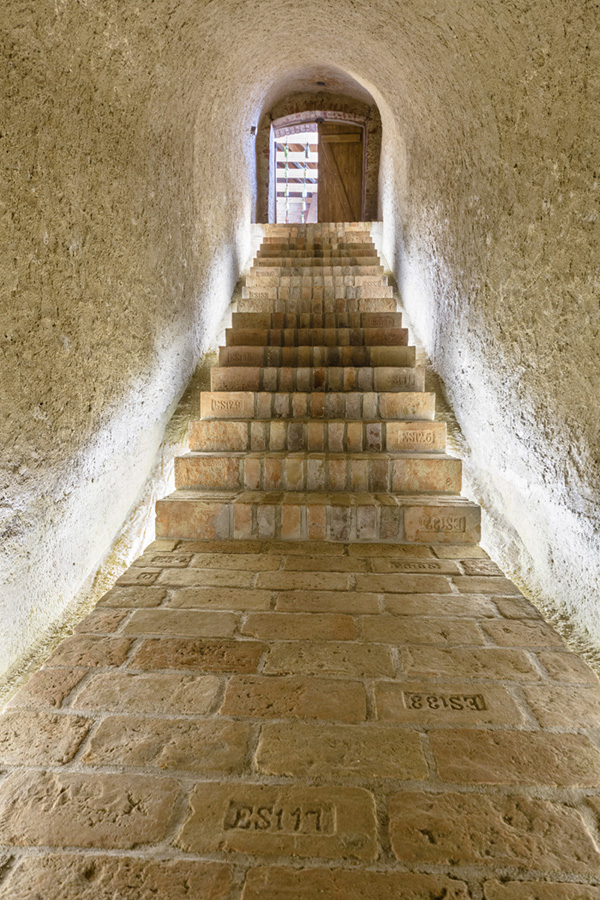 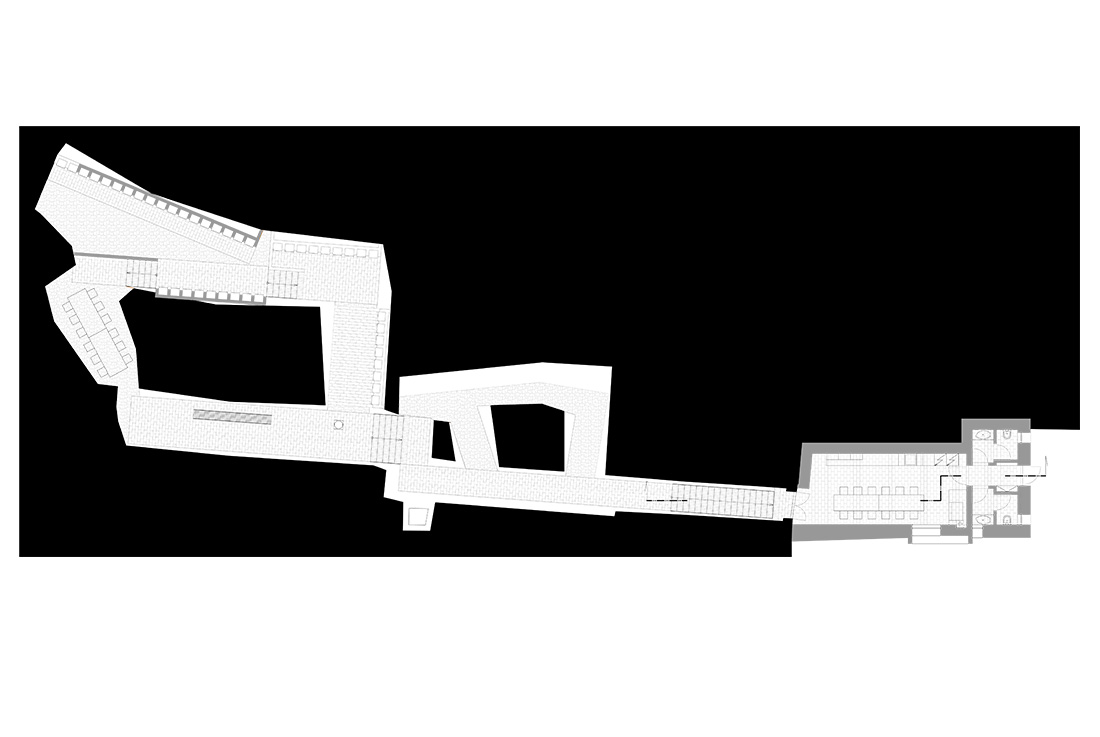 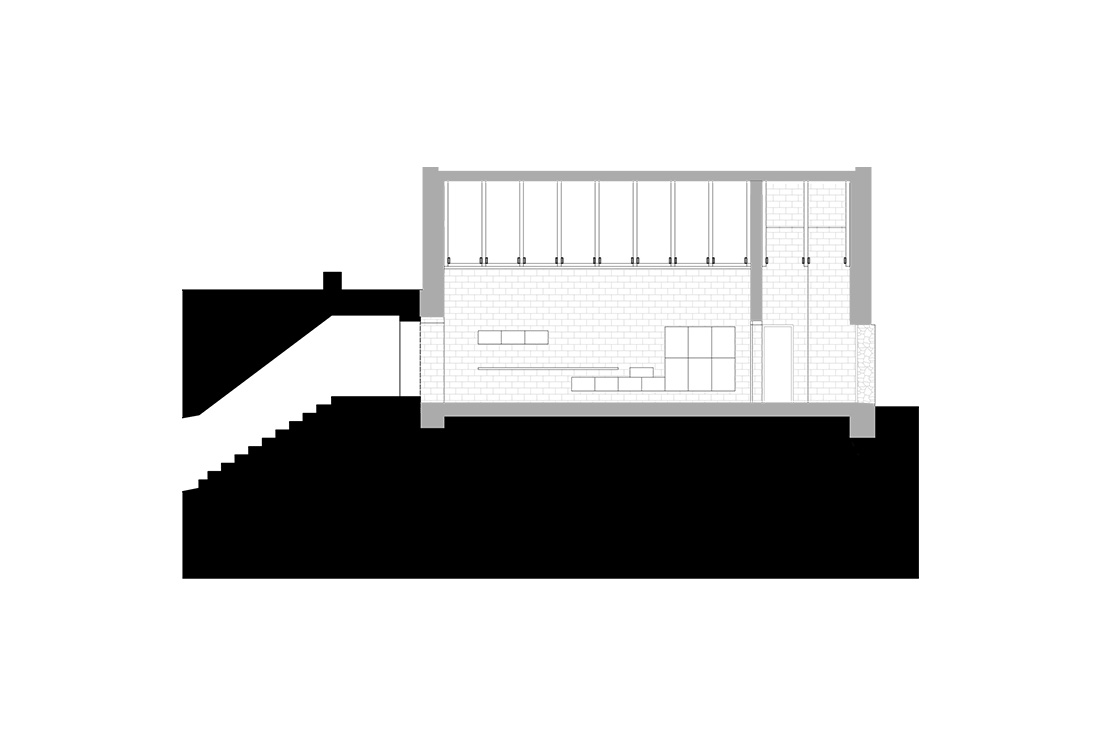