The two gardens in Žiri

The architect Juta Krulc has designed two medium-sized gardens by the family houses in Žiri and in Rakulk near Žiri. She started designing the two gardens in 1996, but her work still has not been completely finished. The two gardens have been created in a user-friendly way, in terms of its use as well as aesthetics. The architect used many spring flowers, roses, maple trees, azaleas, and evergreen shrubs that represent the main framework of the garden. 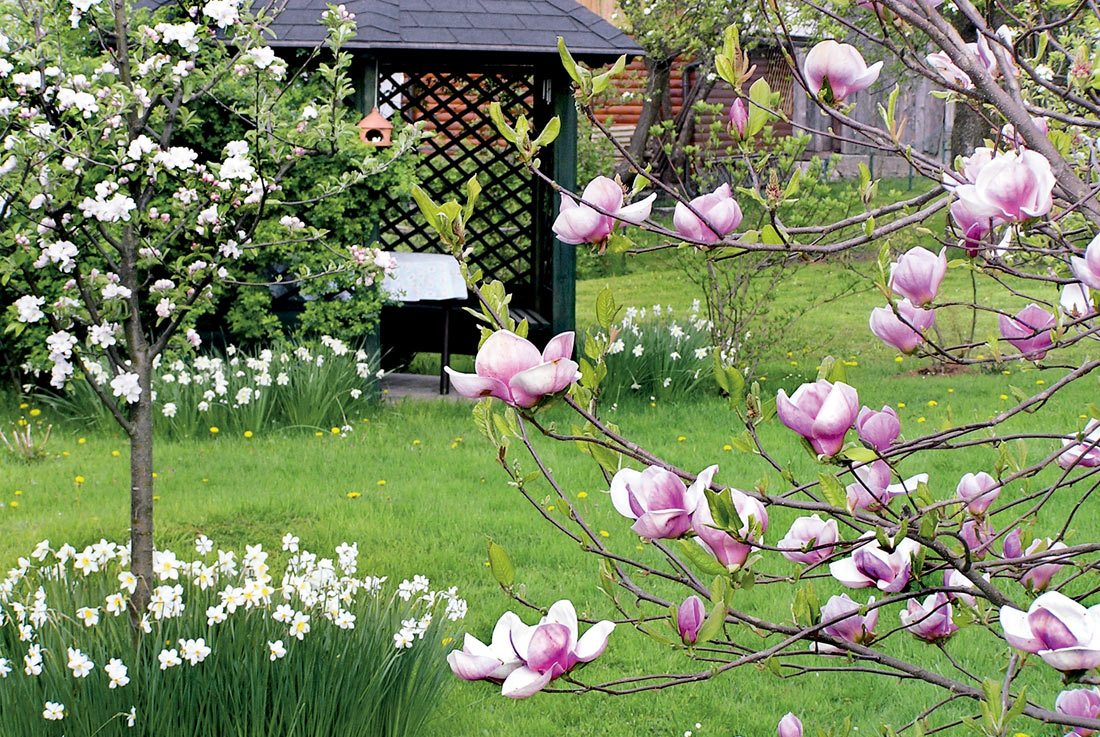 A garden as a living room

A private garden designed by Ms Juta Krulc can be found in a densely populated neighbourhood near the centre of Žiri settlement. It has been designed in such a way that it contains a “spring garden” which is winding towards the summer garden along the western side of the house. Upright and lying yew trees can be found right at the beginning, amongst them also some red-leaved maple trees and a magnolia stellata. There is an illusory border by the lot boundary with pillars made of honeysuckles that make it possible for the garden to breathe and they also prevent it from being hidden from the neighbours. 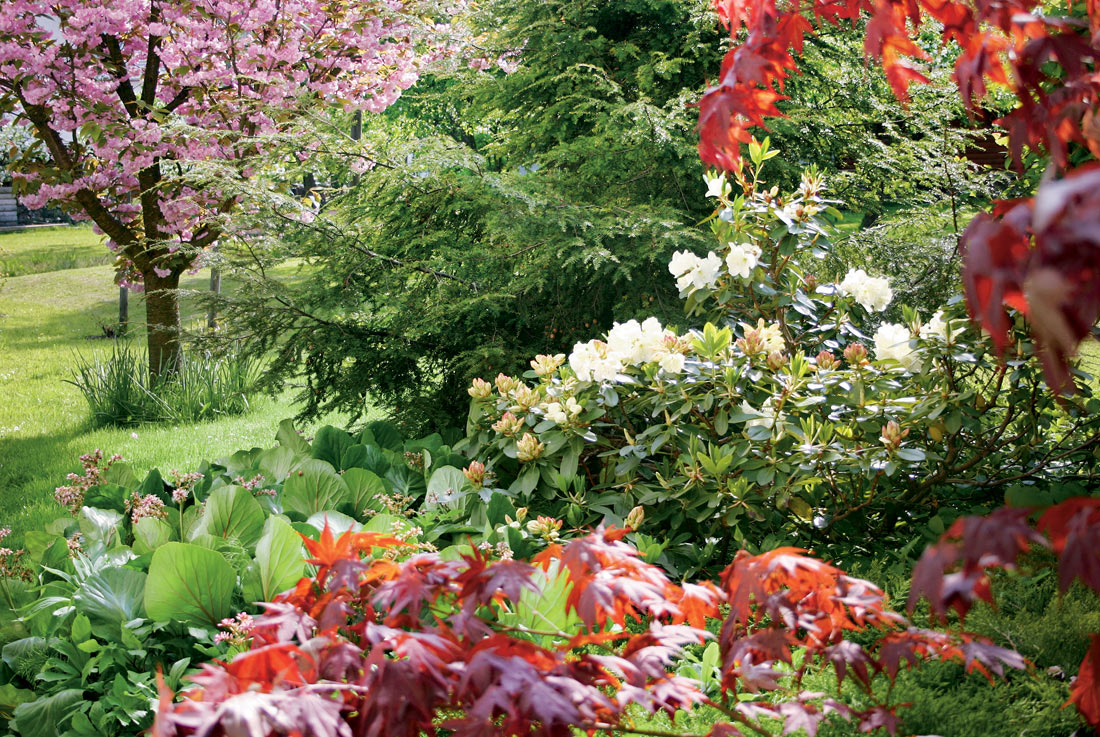 Since its first design plan was made the garden has been changing and transforming quite substantially, because Ms Juta frequently visits the family and, on the basis of her momentary inspiration, gives them instructions regarding some further improvements of the house surroundings. 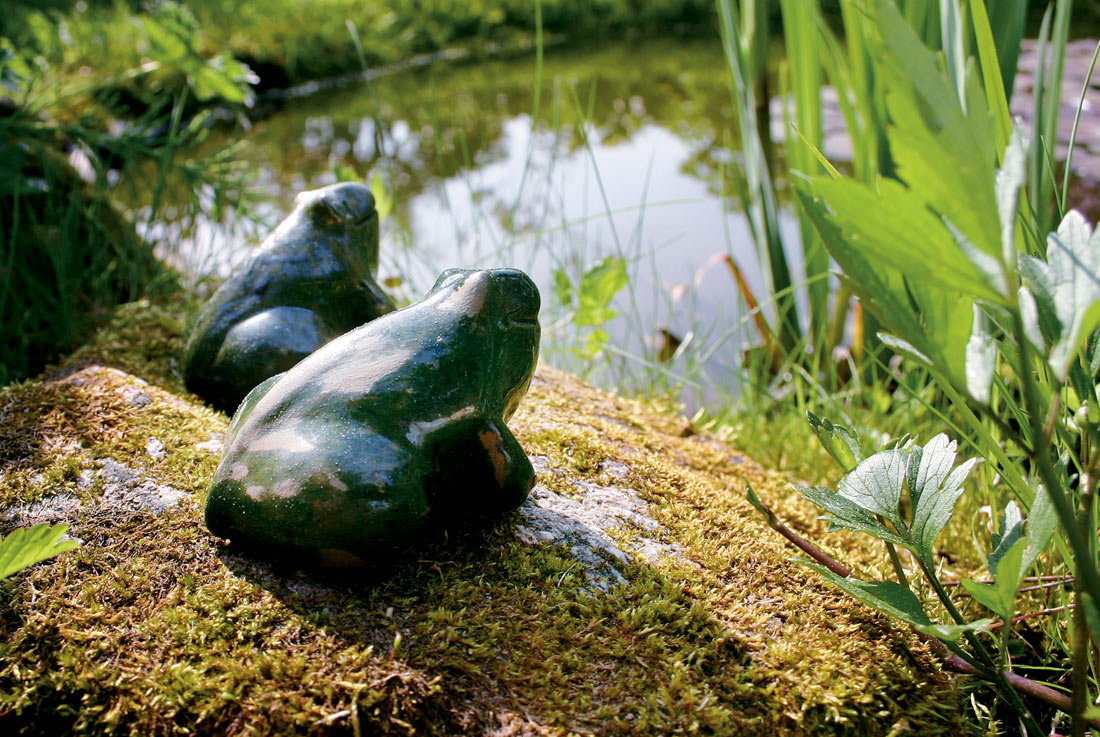 The owners, who have recently renovated the elevated ground-floor of the house with living premises and a wonderful open terrace with a view over a garden, would like to build stairs, leading from the terrace to the garden, which would enable a direct connection with the garden. The owners also wish to arrange a summer kitchen under the stairs, since in summer time family members mostly spend their time in the garden that represents an additional “living room” for them. 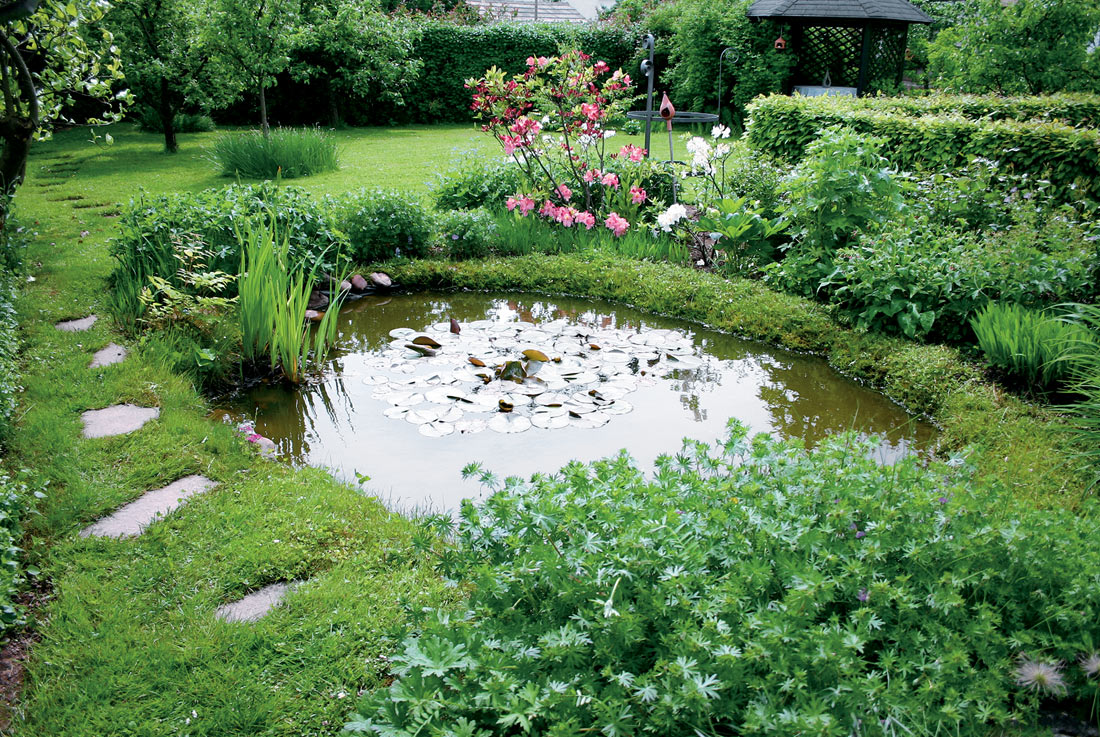 After Mr Sobočan had retired, a couple living in a block of flats moved back to their village house. The surroundings of their village house were rather disorderly, however, what they wanted more than anything was to live in a well-arranged and organised environment. Ten years ago a local florist introduced the couple to Ms Juta Krulc, and thus their long lasting, garden-design related cooperation started.

The garden by the house has been designed in such a way that it attracts the attention of passers-by. The architect, namely, frequently highlights the fact that the beauty should be exposed, not hidden. 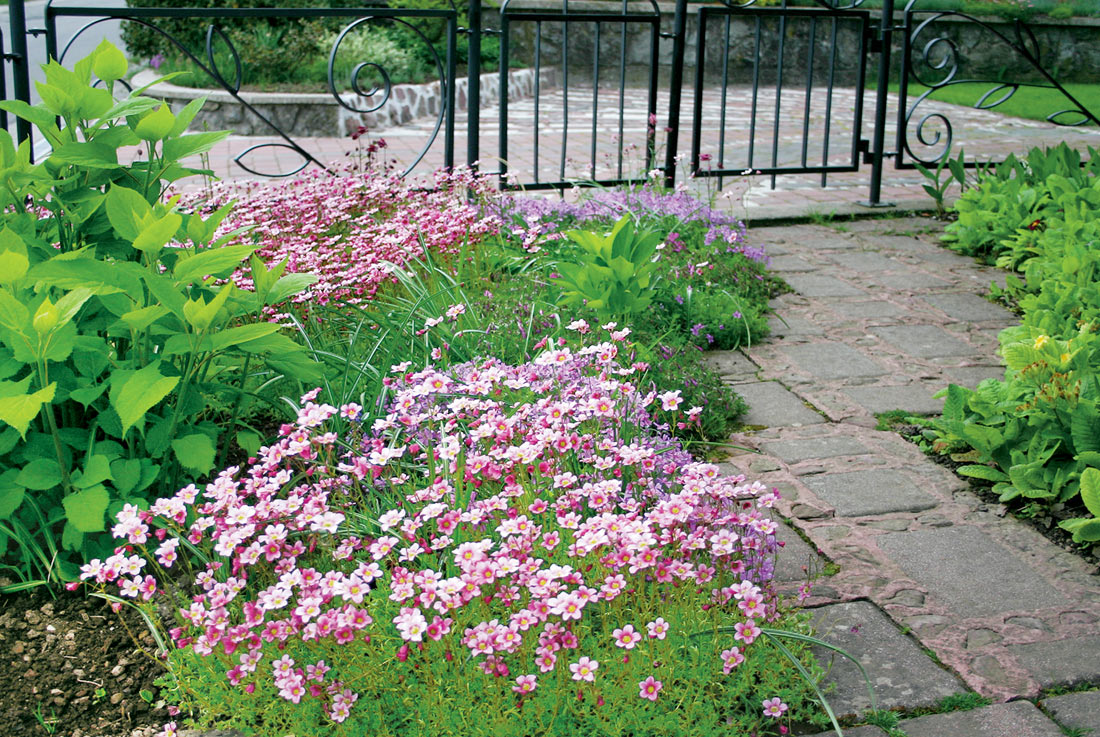 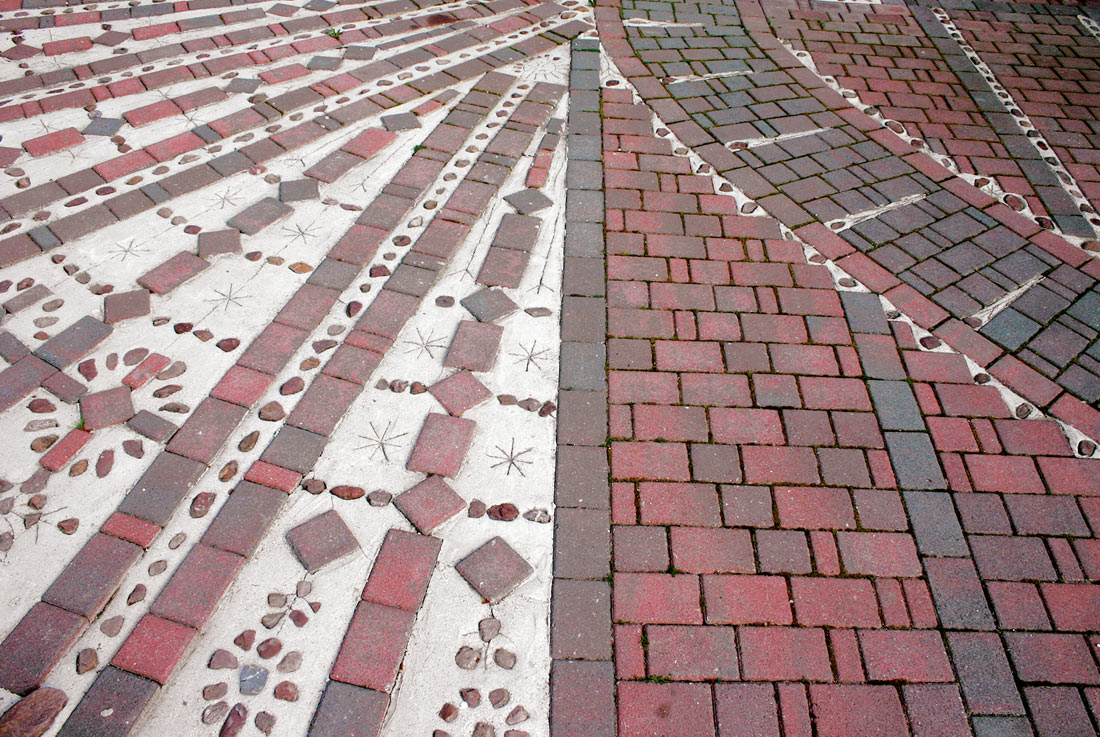 There is a “spring garden” by the entrance where spring perennials can be found. The garden leads to a meadow with an apple tree preserved in the centre. The architect has decided to place a bench under the apple tree, and she has also created a paved path nearby that goes past the peony garden and leads to the terrace. Thus the living premises have become connected with the summer garden where family members like to spend their time in warm weather. 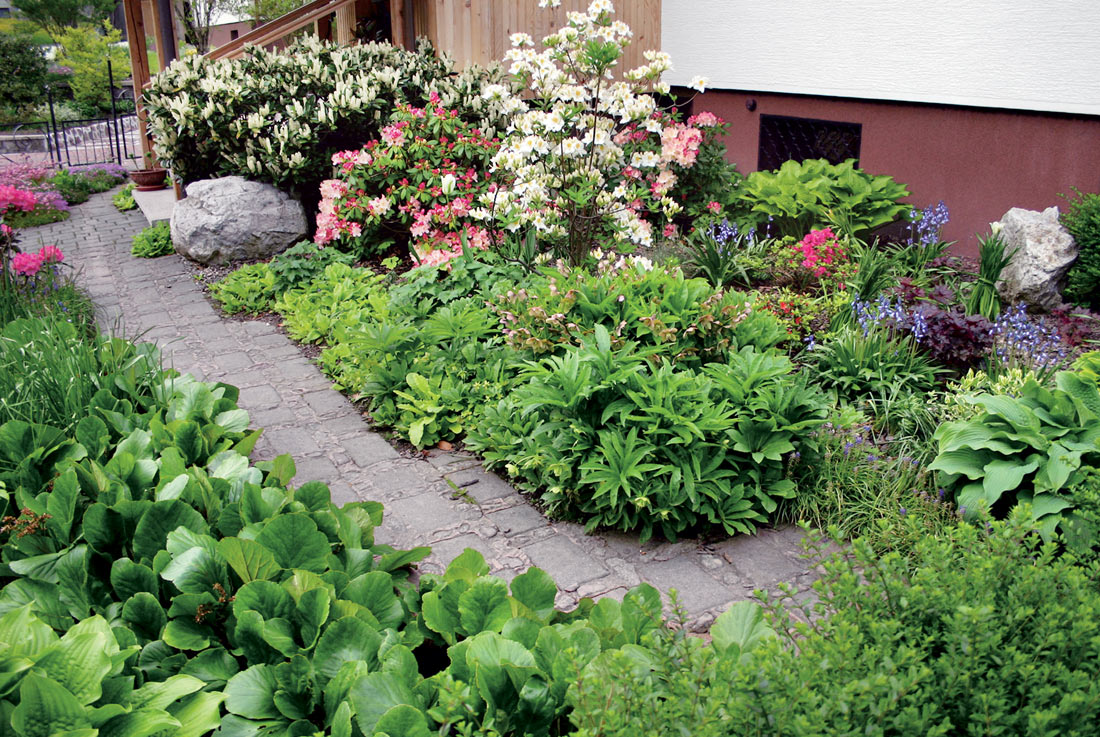 There was a strong hail in Žiri in 2004 that, unfortunately, damaged most of the Sobočan’s garden. With Ms Juta’s assistance the owners managed to restore the garden, but unfortunately it still has not fully recovered. 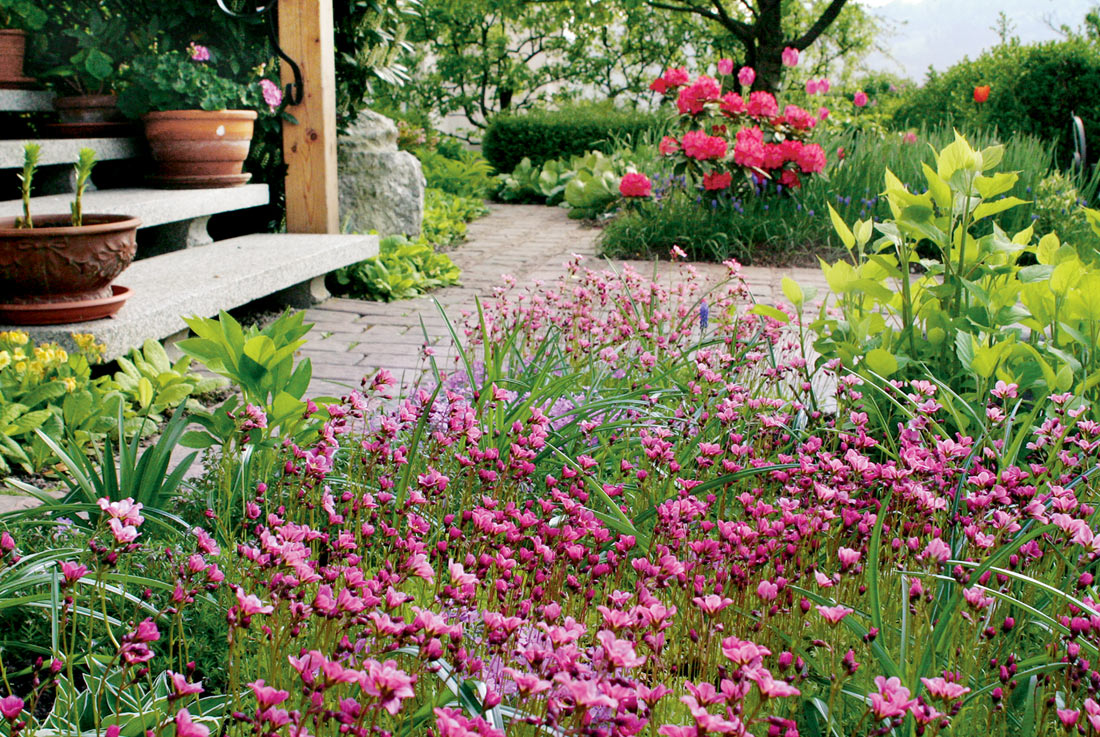