Levi Van Veluw, Born as the grandson of a minister, he has been fascinated with the church and its rituals since his early youth. The complexity, conviction and certainty with which the faith was proclaimed in his congregation and the stark visual language of its practice made him sensitive to the visual vernacular of religious seduction. Yet also modern spiritual movements, such as the well-known Church of Scientology, that make convincing use of religious symbols, intrigue him as well. 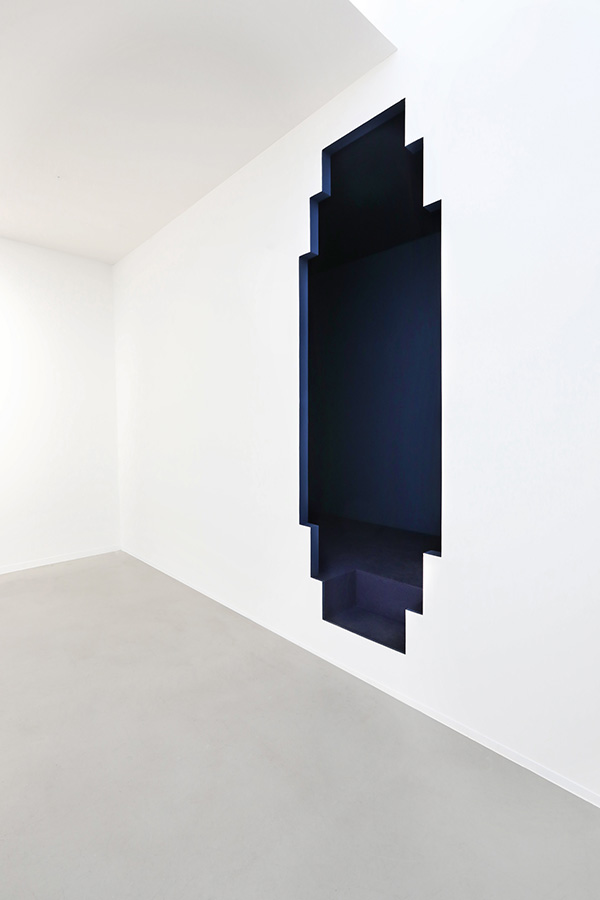 Throughout the ages, in cultures around the world, religion has played an important role in the development of art, architecture and storytelling. Even if spiritually is ultimately immaterial, most people practice their faith in places of worship, using sacred objects and performing sacred rituals. Van Veluw has meticulously studied the rich formal language and power of imagination that is used to lead people to religious faith. Within this research, he is particularly interested in the aspects of the religious process. He chooses not to focus on political issues surrounding faith, but rather explores how the various faiths operate in the mind of the faithful through form and image. And whether he, as an artist, is capable of provoking a convincing spiritual experience in the visitor. 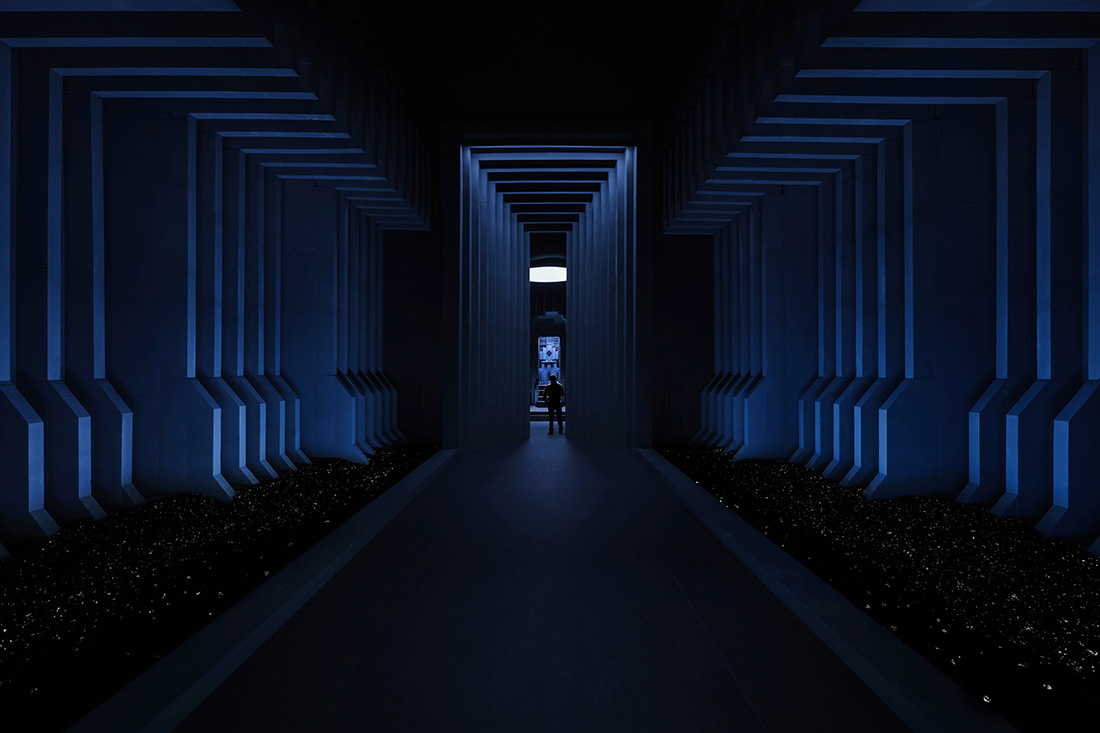 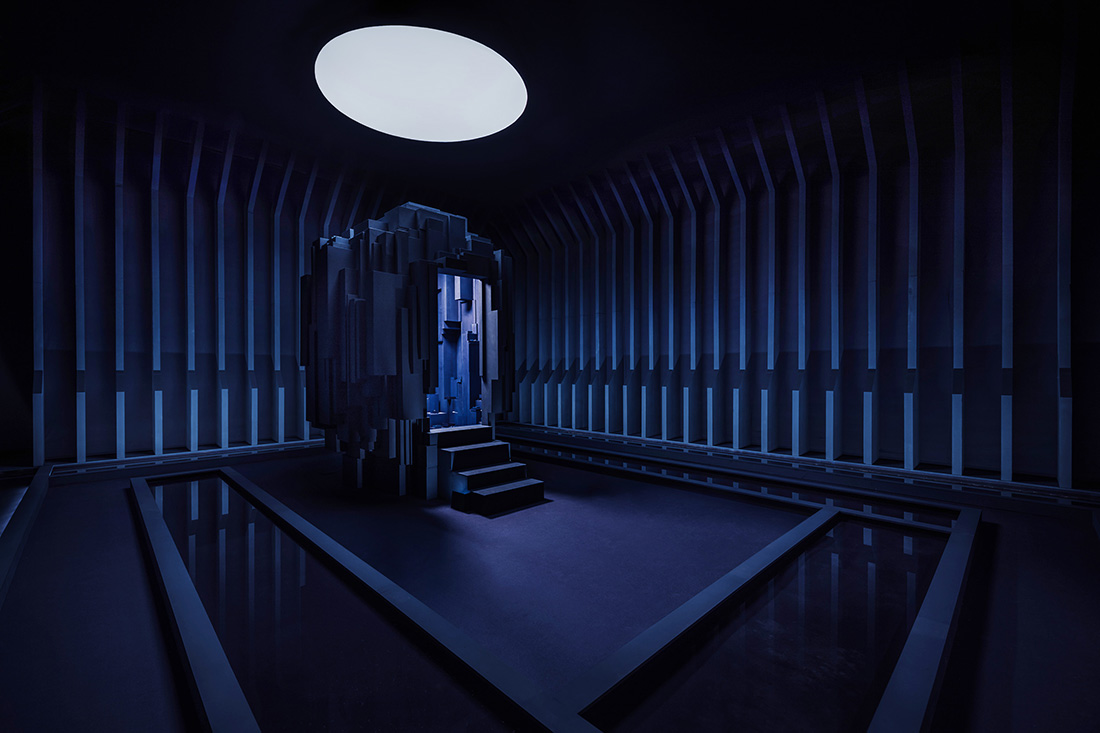 The installation Sanctum, developed especially for Dello Scompiglio, testifying of a fictitious religious conviction, engages all the senses of the visitor. The last room where visitors ended their journey in Domain the Kerguénnec “The relativity of the matter”, becomes the starting point for a more elaborate proposition in the expositive space of Dello Scompiglio. Van Veluw based Sanctum on of the first religious buildings, the tabernacle, also called the tent of meeting. This tent served as a place of worship and symbolized God’s presence amidst those who had gathered. The interior of the tabernacle consisted of 3 spaces: the forecourt, the Holy Place and the Holy of Holies. These spaces were sacred in ascending gradation. Like the Tabernacle, Van Veluw’s work features symmetry and harmony, to express the strive for divine perfection and reflect the divine holiness through the careful gradations of the three phases. As such, he plays with the age-old composition of the religious structure and thereby lures the spectator deeper and deeper into the sanctuary. 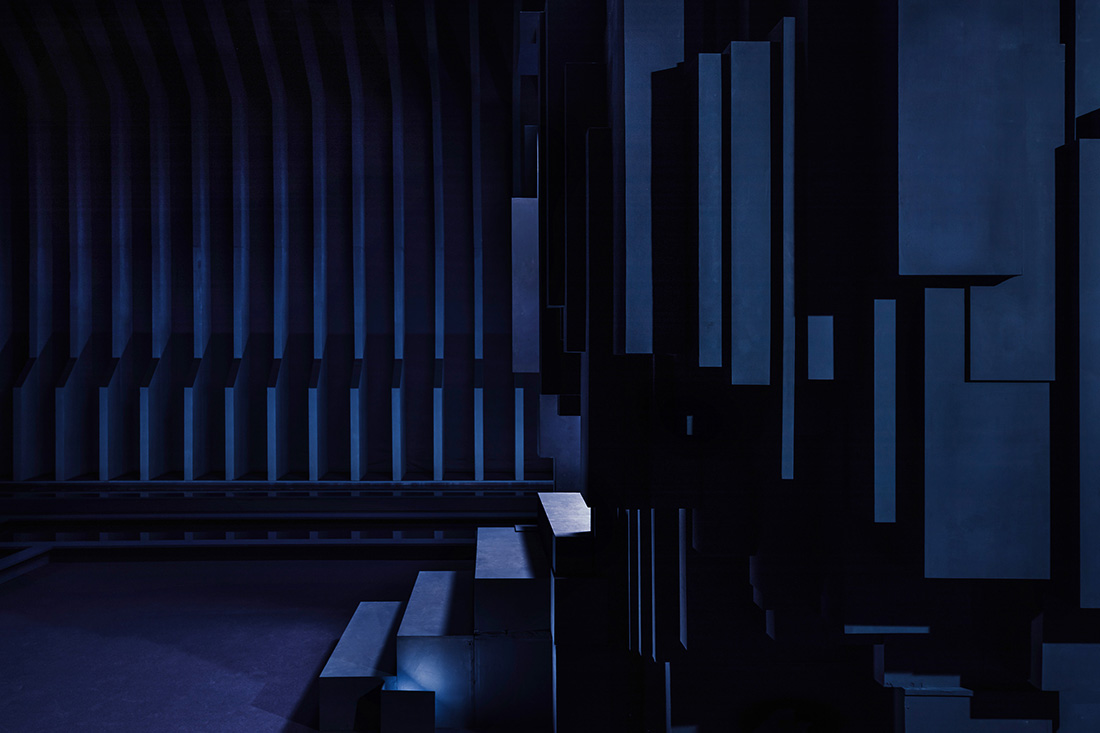 After a long descent, a mysterious dark blue glow shines through a narrow crack in the wall. The visitor enters through this opening into a high-ceilinged, underground space, the forecourt. Massive columns emerge on both sides and mountains of coal lie scattered across the floor, while the path in the centre is kept open. Static forms set in repetitive sequences recall the structure of an ecstatic building, made to glorify an unknown higher purpose. The space slowly comes into view, an open passage at the end leads to what appears to be a ritual environment, the sanctuary. Fragrant water flows through an ordered pattern of geometric incisions in the floor. At the centre, there is a chapel, composed of a detailed network of grids, boxes and openings, the Holy of Holies.

Is this an opening to a new world in which religion, again, plays an important role? Or does the artist use existing symbolisms to lure the mind into a new religion? These are questions the artist leaves the spectator with. 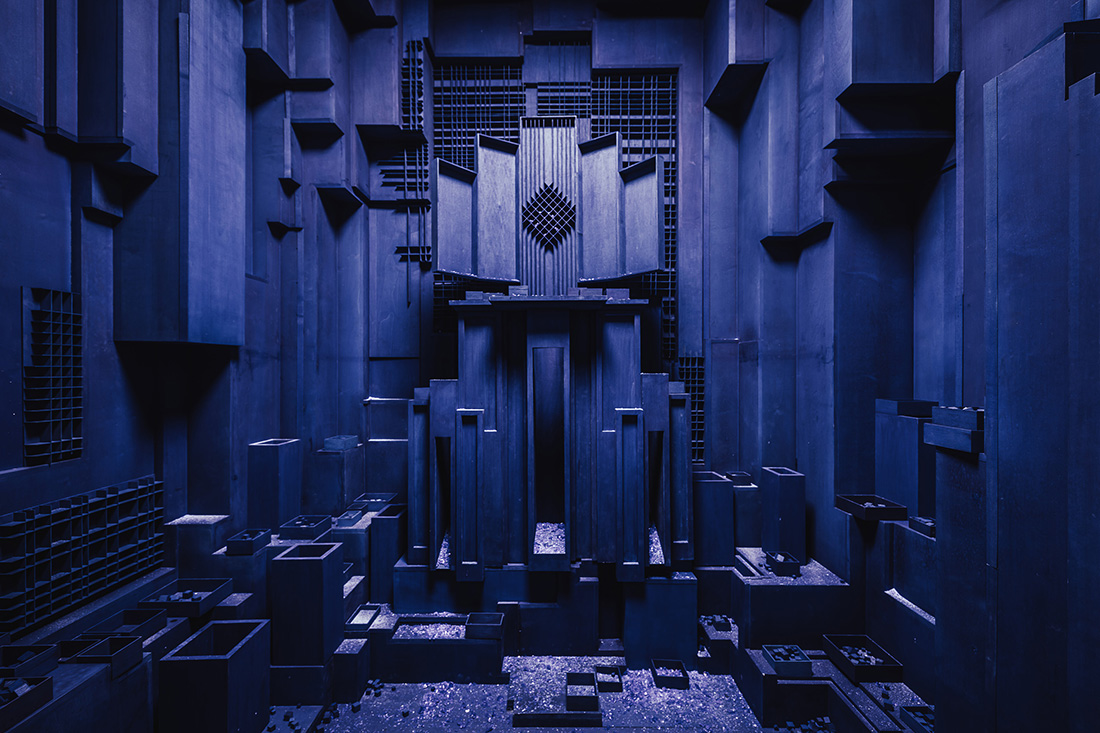 The installation Sanctum, developed especially for Dello Scompiglio, testifying of a fictitious religious conviction, engages all the senses of the visitor. Levi van Veluw transformed 300 m2 white cube with a ceiling of 6,5 meters in height that lies completely underground. Besides the complex chapel in de center of the space, more than 1000 pilars, 5000 litres of water and 2000kg of charcoal where installed inside the exhibition space. 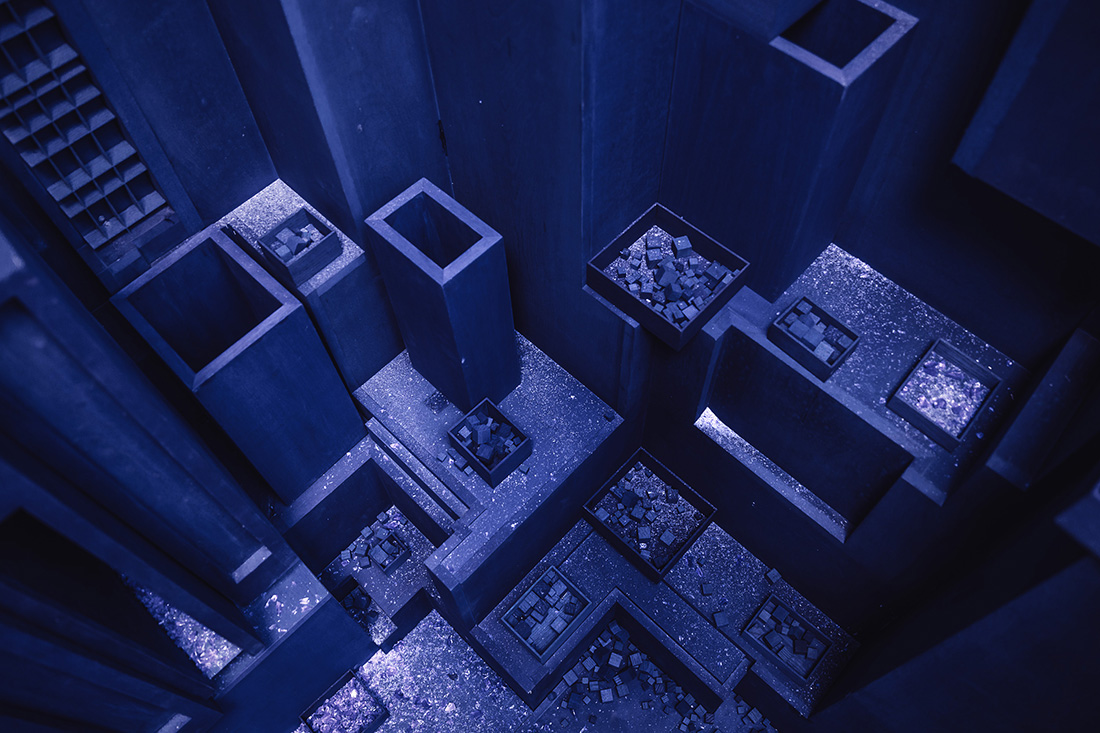 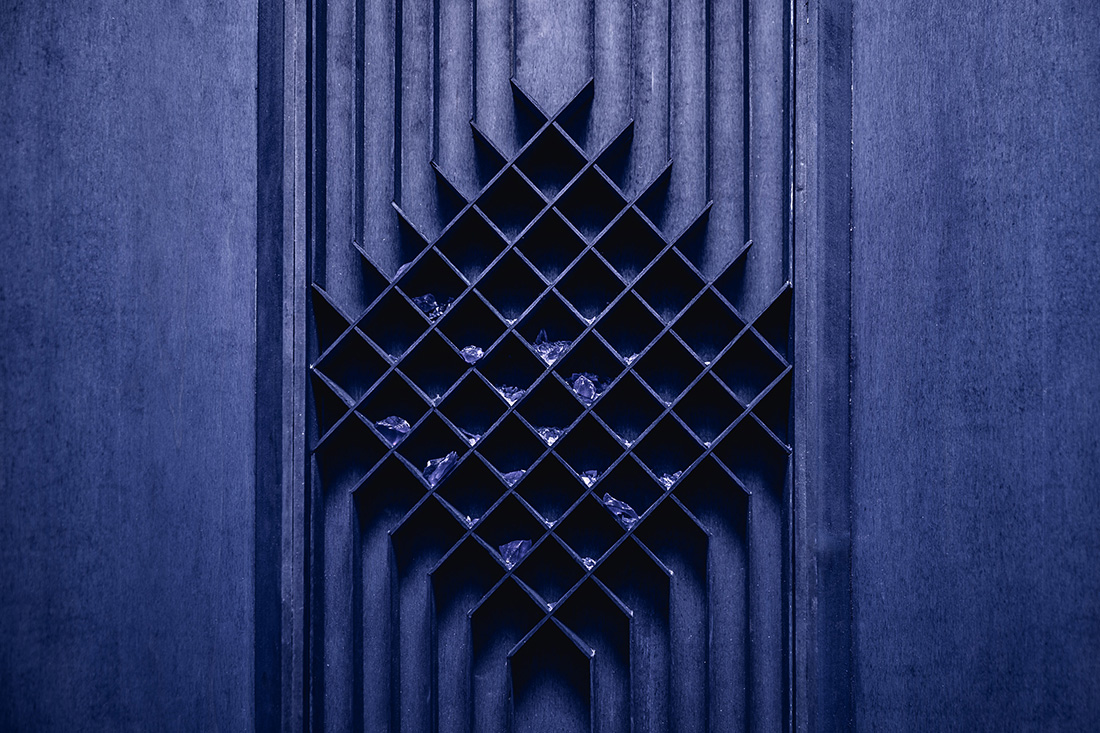 Levi van Veluw was born in the Dutch town of Hoevelaken in 1985 and studied at the ArtEZ Institute of the Arts in Arnhem.

Since graduating in 2007, Levi van Veluw has produced multi-disciplinary works that includes scenografic installations , photographs, films, sculptures, paintings and drawings. This varied body of work has been showcased in many different locations across Europe and the United States, earning him a number of nominations and awards.