Sarajevo is a distinctively longitudinal city that develops along the river Miljacka, trapped between the mountains. There is an expression: Sarajevo underneath the Trebević. Trebević is our mountain amidst the city one might say, as it takes 15 minutes, from the old core, for the newly rebuilt cable car to get to the top, providing unforgetable views along the way. Suddenly you find yourself above the city, approx. 1000m above sea level in the freshness and quietness of the pine forest. Not many cities have that fortune. Trebević was the scene of our life. First fieldtrips, first kisses, joys of life in general are bound for that mountain. Unfortunately, during the previous war, the most dangerous missiles came from Trebević, making it the life threatening space. After the war, heavily mined as it was, it was forgotten.
That is why hotel Pino had that cathartic role of bringing Sarajevo citizens back to Trebević, renewing their love. It is positioned in the exact location of the former mountain resort „Prvi Šumar“. Municipal bureaucracy demanded the old dimensions to be strictly followed. Limit is an inspiration.
Our intention was to create a reper, a landmark, that would celebrate and respect its surrounding nature and bring back the trust in that mountain that seeded death. 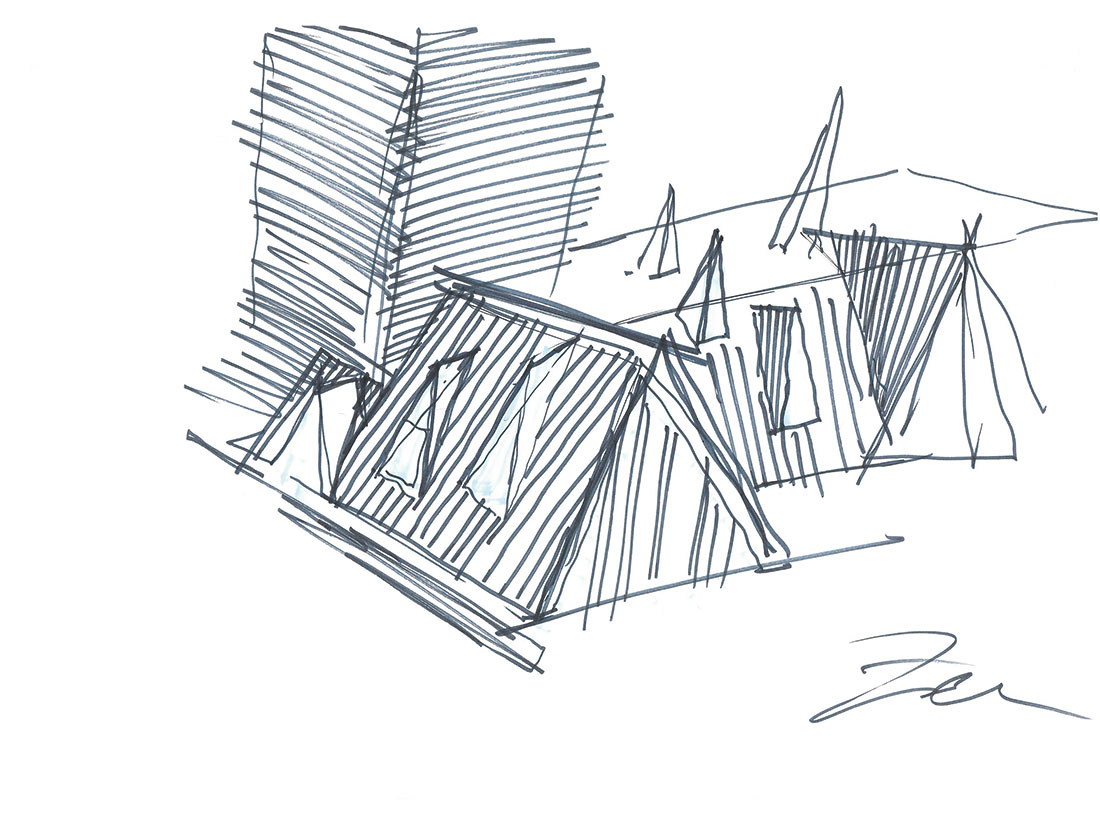 The inspiration for the mountain objects was found in the simple and logical village huts. They are the personification of the famously known TRIAD of the house, BASE – BODY – HEAD, creating the cosmology of the house that Mircea Eliade spoke of. THE HOUSE IS MADE BETWEEN THE SKY AND THE EARTH – as it is defined by Martin Heidegger. That is easily readable with this hotel when you look at it. The base, a space for the spa and basement areas is partially in the ground and carries the middle part with the public spaces of the restaurant and the fireplace room. The roof is filled with two floors of bedrooms and it all culminates with the tower containing the suits. Logic of Bosnian mountain huts. 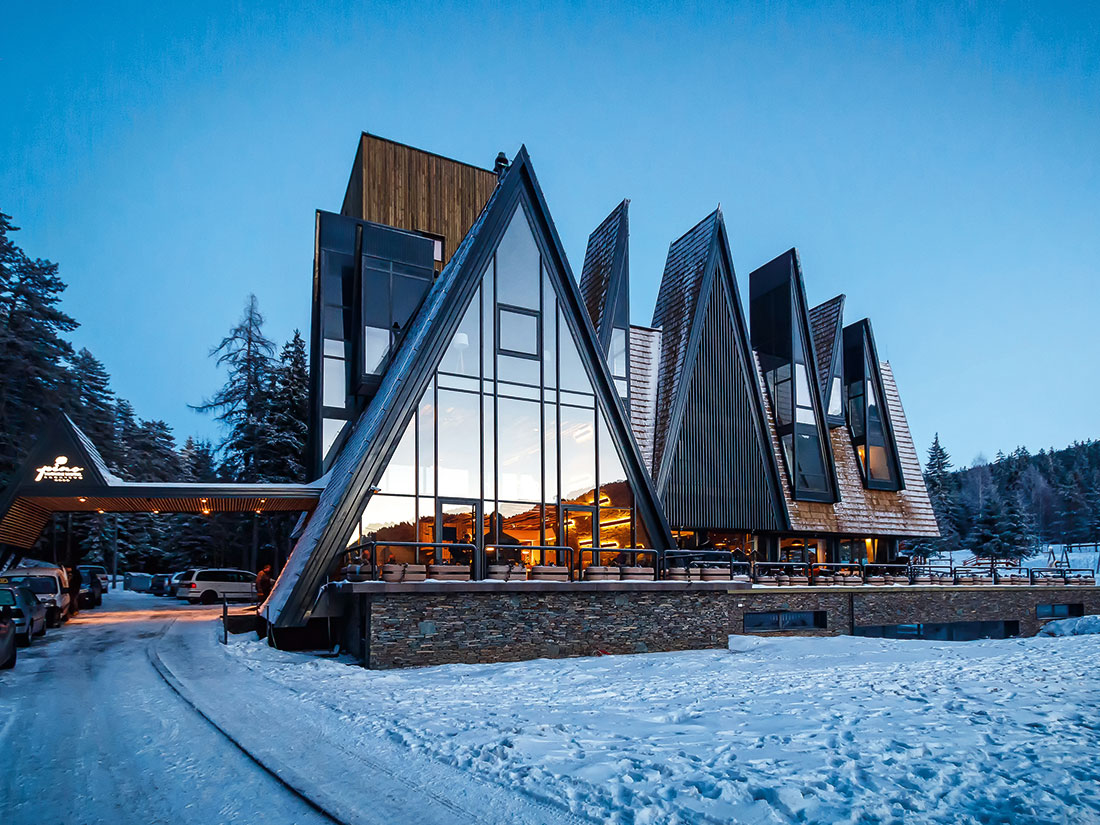 The hotel is located in a hidden valley dominated by verticals of pines and spruce. That is a cathedral of nature. That is why we could emphasize the verticality and the silhouette of the building that corresponds with nature. For the success of a film, besides the most important scenario, character selection is equally as important. In our profession those characters are the materials. The choice went to the natural and logical materials for that climate. Local stone in combination with shingles – hand-crafted wooden plates for covering in several layers of roofing levels. It is the material that deals very well with the daily temperature changes, and the roof gets the structure of a pinecone. 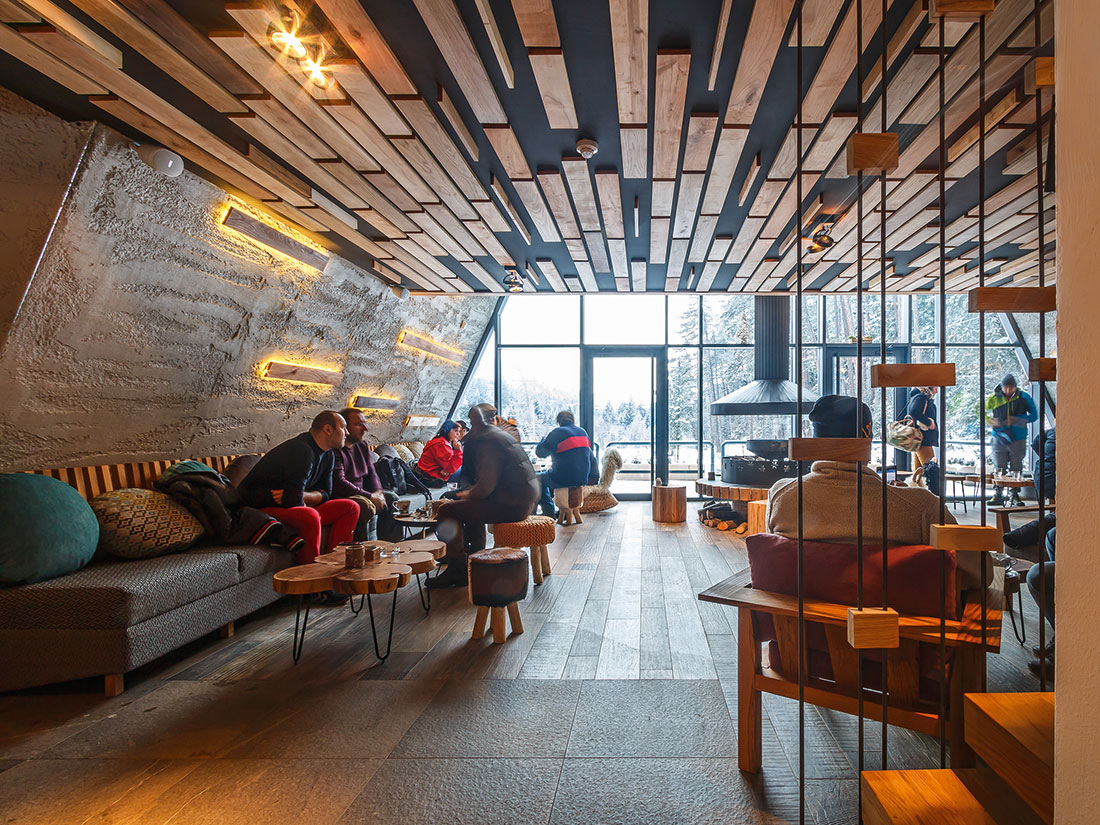 Extremely pointed openings in the roof are emphasizing the objects silhouette and make for a unique interior that the guests enjoy using. In any of those corners it feels as if you’re outside but you’re still inside of course. All of this would be in vain if there was no proper disposition and layout that we consider our philosophical thread. No point in wearing make-up if you didn’t sleep well. Its a saying that makes everyone laugh but it is the truth of every creation. Equal to that, if you set the house wrongly, there is no material that will save it. All of this logic of the space, of this mountain, dramaturgy of the place is potentiated in the interiors as well. We succeeded in creating very user accepted spaces, that exude intimacy. Architects tend to forget that definition of the space because it contrasts the arrogance and aesthetics that only we understand. It is the autism of our profession and a mislead of our education. 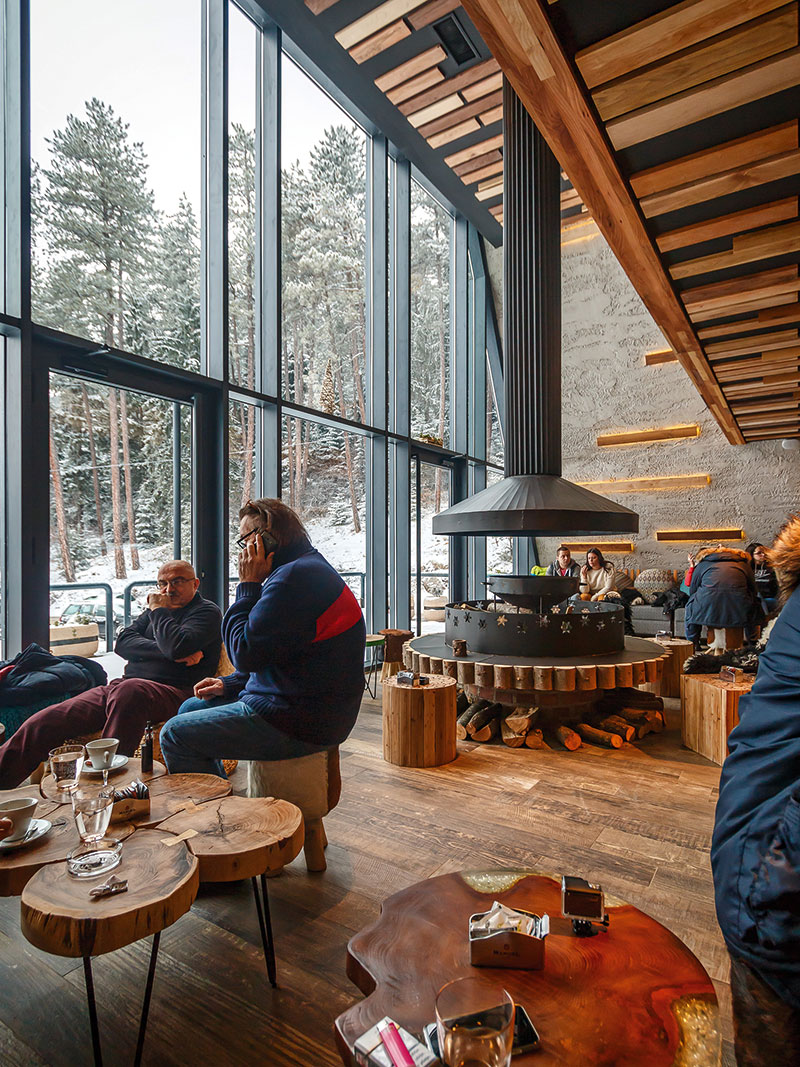 Hotel Pino renewed the aura of Trebević. Now that the cable car runs again, it is an unavoidable part of the Sarajevo tour. To us, the biggest satisfaction is the acceptance of the average people as the hotel, with its silhouette, position and internal disposition, charms at first sight. It is not an arrogantly beautiful building, but rather a nice and sweet one. 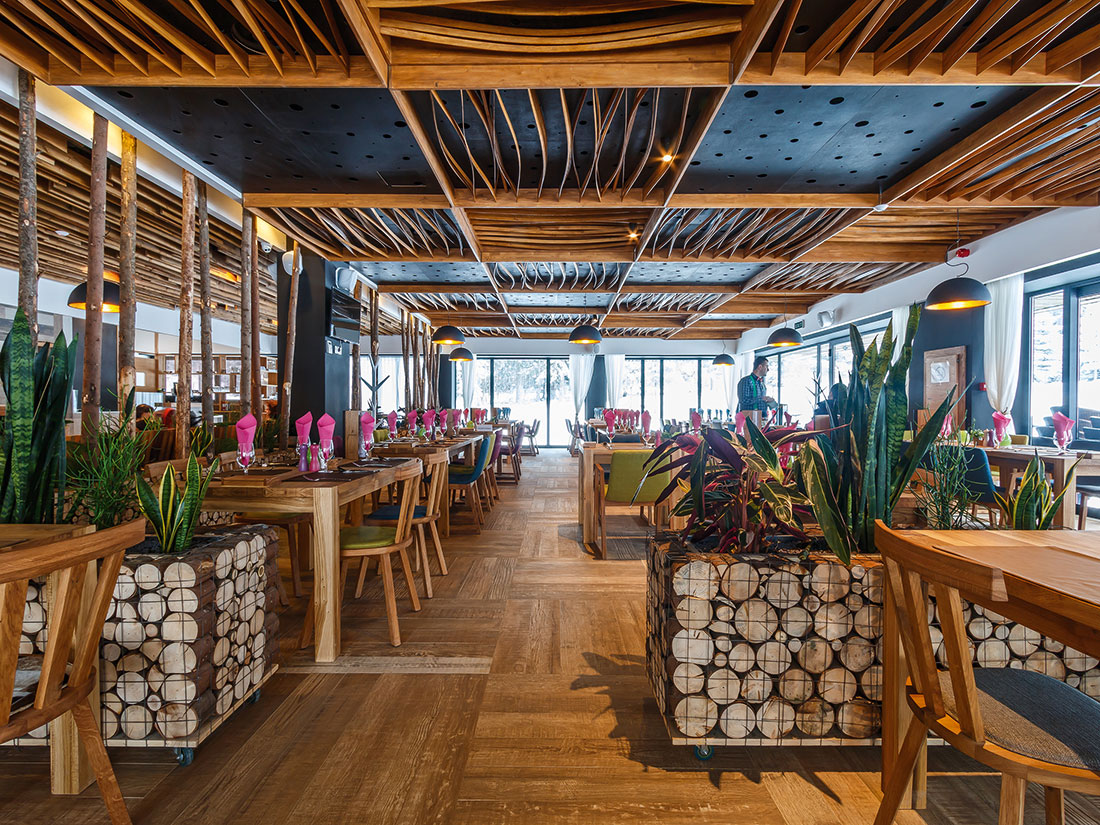 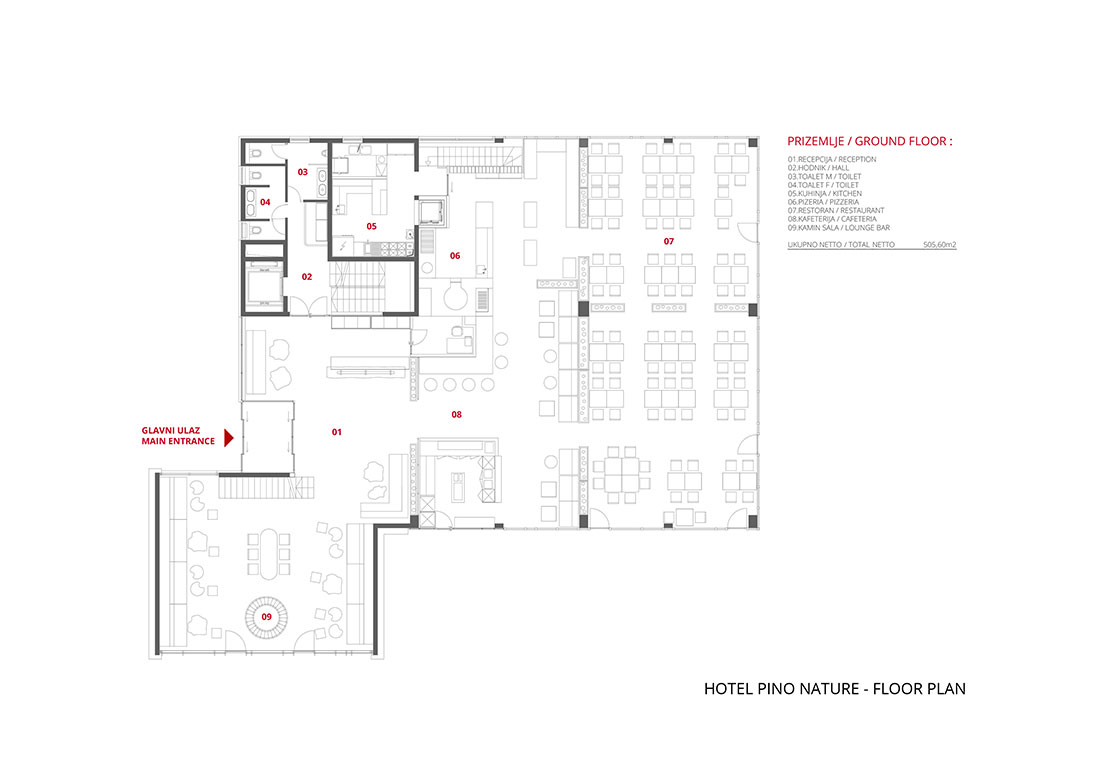 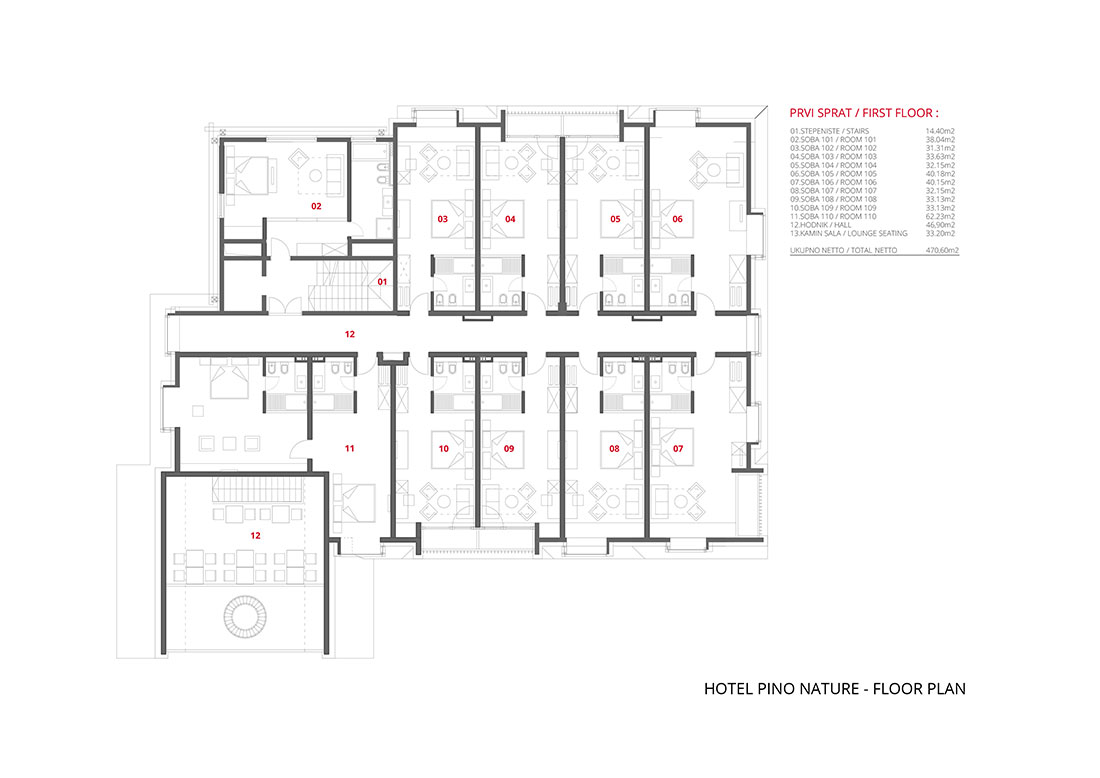