A new, modern headquarter should present the internationally operating enterprise Durst Phototechnik AG as a showpiece and enhance and strengthen Bressanone as a headquarter. Durst is a world-leading manufacturer of advanced digital production technologies. In the active business areas, Durst is the first choice and a preferred partner for the transformation and digitization of industrial production processes. Durst is a family company with an 80-year history, where the values are focused on innovation, customer orientation, sustainability and quality. Durst employs more than 700 people and has more than 20 subsidiares across the world. In future, Durst will invite more of its international customers to the Customer Experience Center in the 5,700 square meter headquarters that embodies the transformation into a highly specialized, high-tech business. The integrated concept has been incorporated into the the architecture of the building as it connects a new administrative block with production facilities.
Of great importance is the incorporation and involvement with the existing building designed by Othmar Bart. The original idea of a flat floating wing with a tower will be re-introduced and creates the new face of the Durst headquarter. The new building presents itself as a compact, homogenous construction body, which awakens interest by its exceptional facade. The organically shaped „pixel facade“ consists of powder-coated aluminium panels, and creates a high recognition value. In the jambs of the windows, LED lights will be installed, whereby the facade can be staged at night as a dynamic pixel facade. The line of the glass base zone is taken up and continued, by putting a slightly curved elongated two-storied construction body over it, which finds its end in the six-storied tower.
The pixelated facade of Durst’s new headquarters is also a pointer to the company’s areas of business, as Durst is a global leader in high-performance printing systems – from image data processing and printing to final product finishing – all from a single source. Direct connections to the existing building will be constructed to allow an ideal connection. The ground floor takes the facade line and docks in the north to the administrative building. It is realized as an open designed area in which are located functions as demonstration area/LFP- and textile with its corresponding spaces, as well as laboratories. In the southern part are the new costumer entrance with the foyer, the bar and the restrooms. An open staircase leads to the first floor where the customer service and the label are housed.
In the southeastern part are located the tower development and the offices. The second floor is a pure office floor with meeting rooms and a direct connection via a bridge to the existing office wing. In the third and fourth floor of the tower are the offices of the management and the fifth floor is used as a conference room or a space for exhibitions. In the basement are located the ceramics, the exhibition stock and the squash field, as well as changing rooms, showers and restrooms. The driveway is newly organized, so that the access for the staff and customers is separated from the access for the delivery. After the entrance gate is a forecour that leads to the new covered customer entrance.
The 850 m² glass roof is made of approx. 250 different sized, partly triangular insulating glass sheets. The façade covers approx. 7,000 m². 1,800 m² is a glulam construction as load-bearing facade element. 930 m² on the ground floor is a transom/mullion facade, while on the 6th floor 1,200 m² is a facetted transom/mullion courtyard facade with curved all-glass facade. The innovation and challenges have been the complex transition from the first vertical to the horizontal roof glazing, the extremely tight schedule from design to fabrication to installation and the free-form metal facade geometry consisting of thousands of different components. 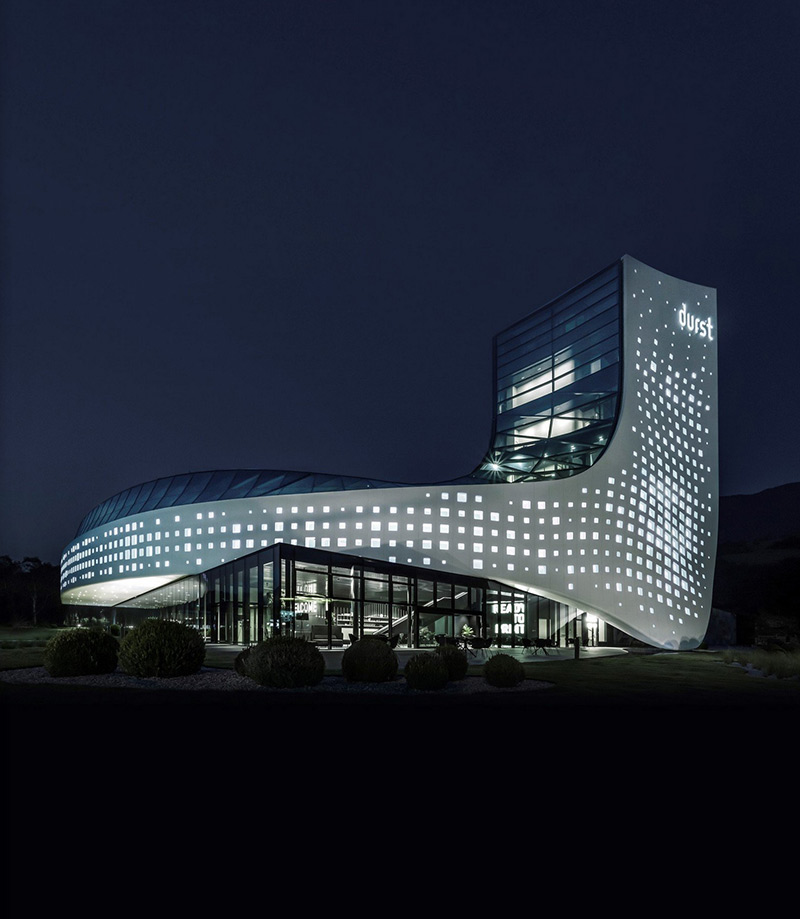 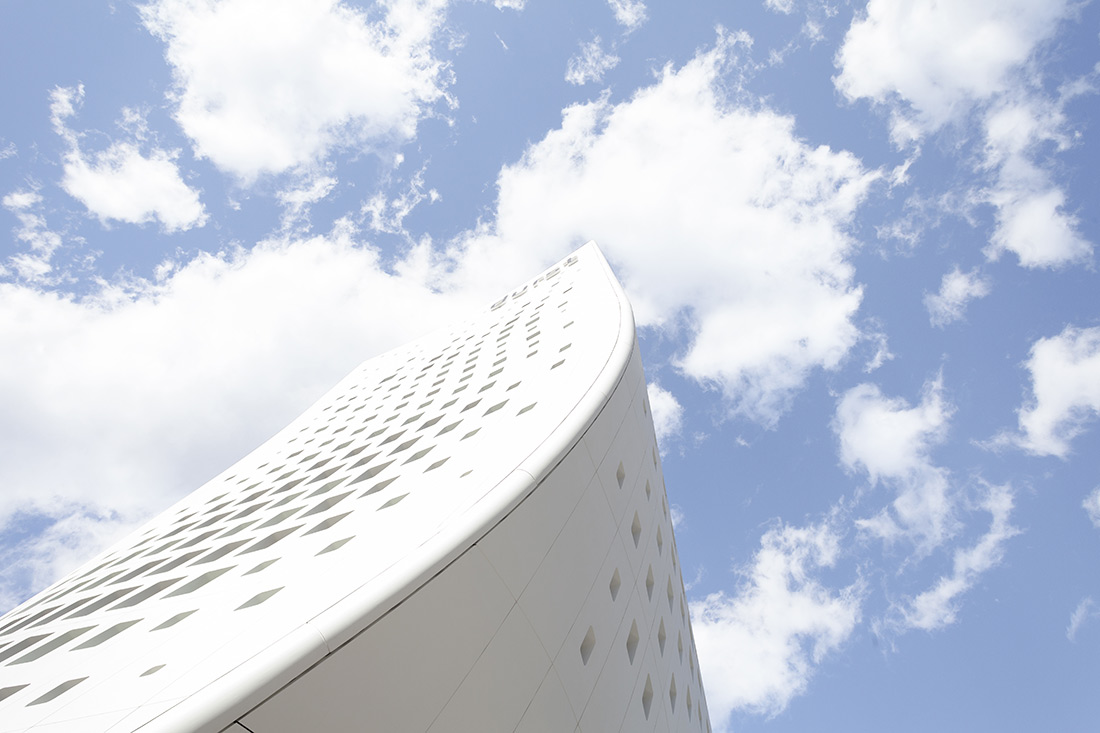 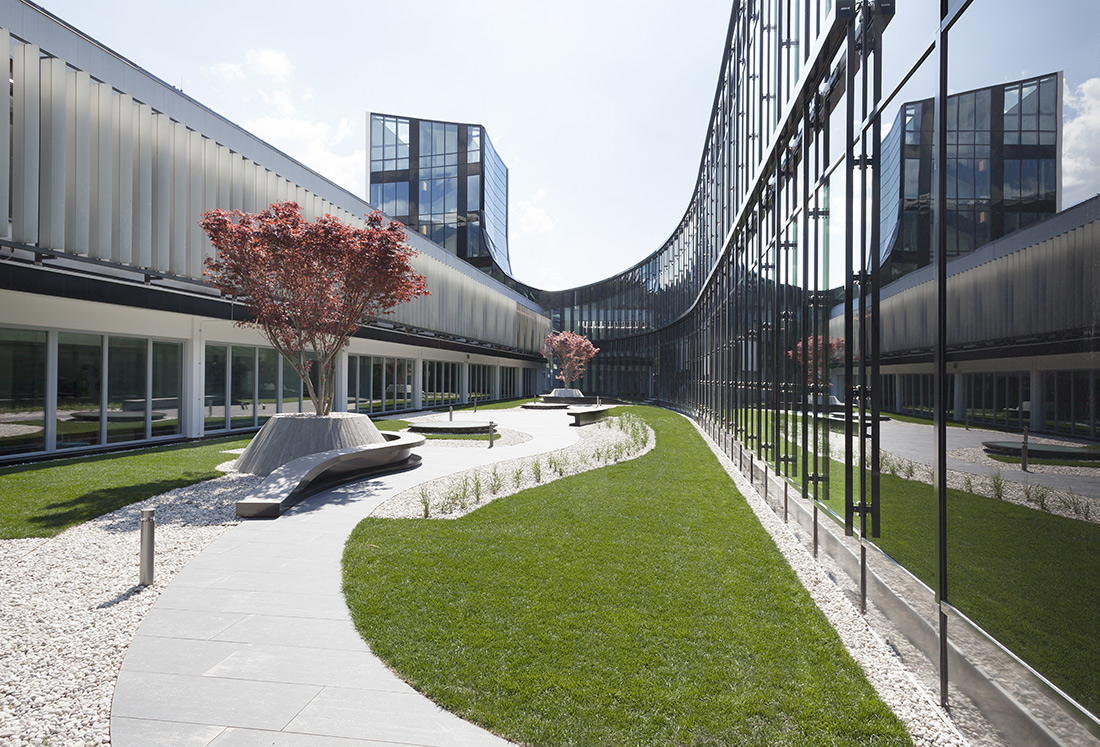 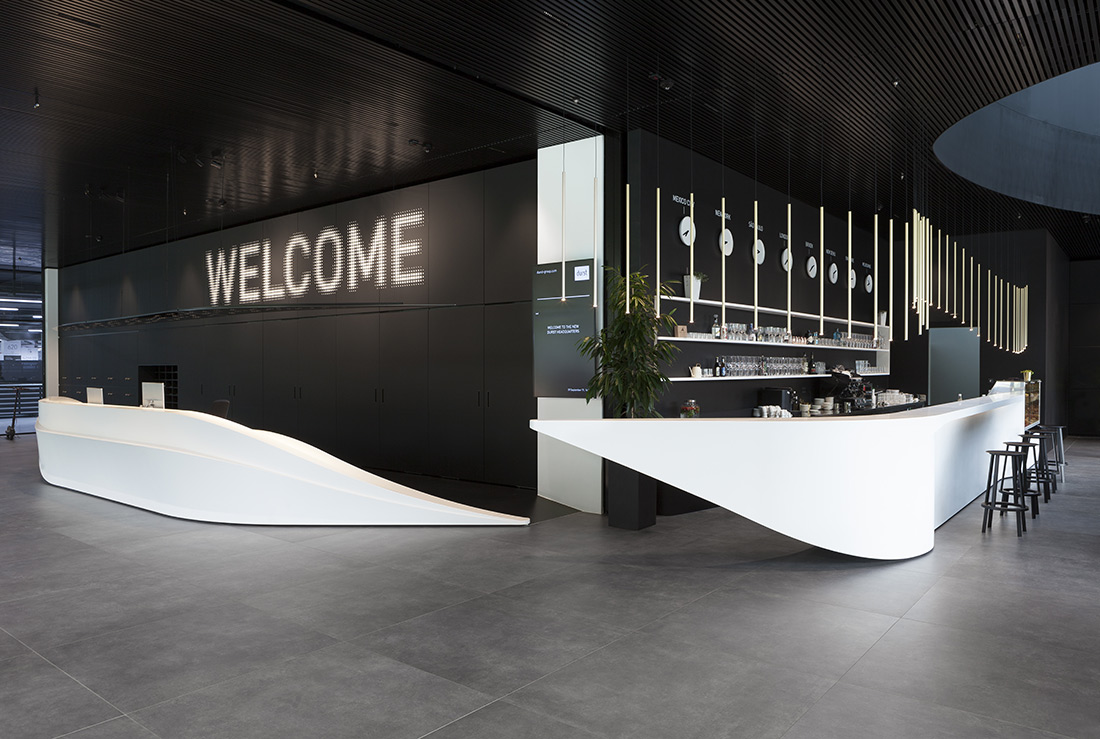 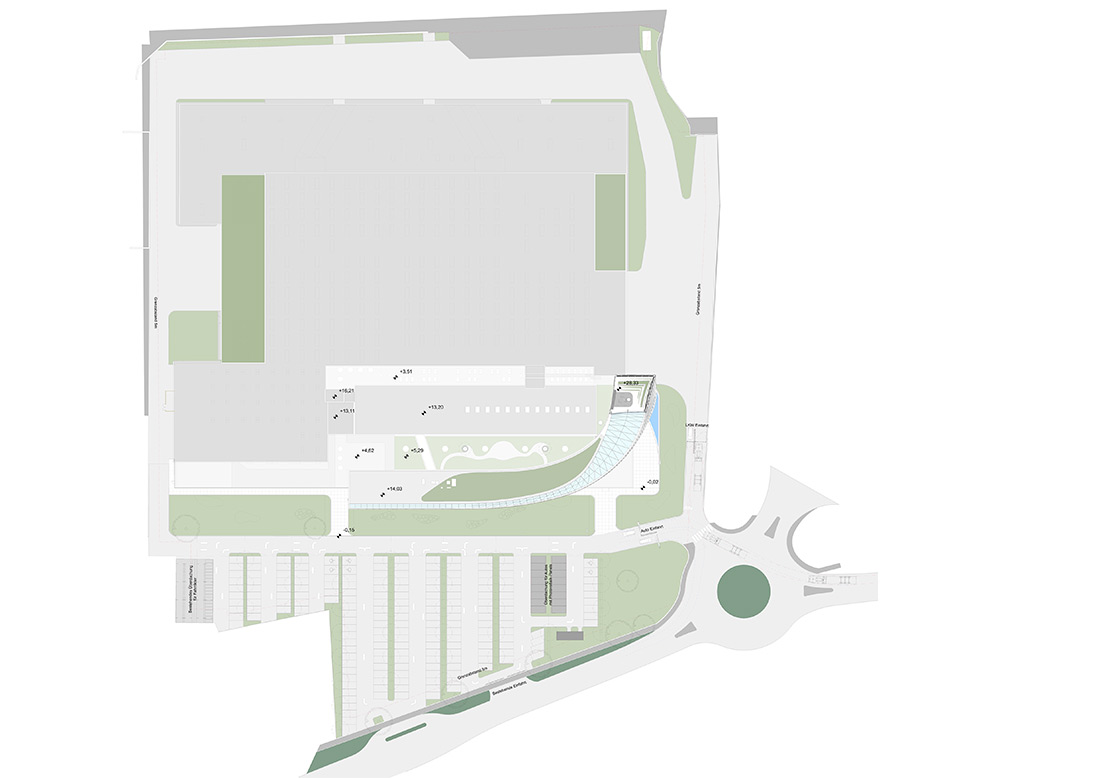 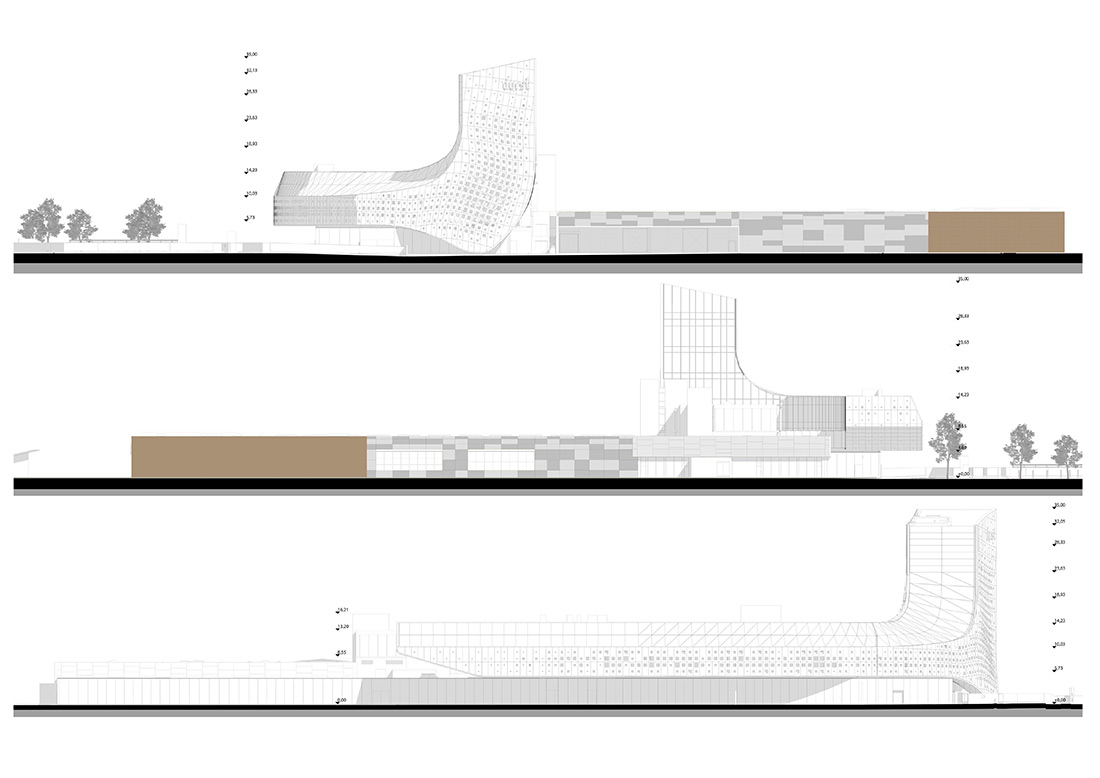 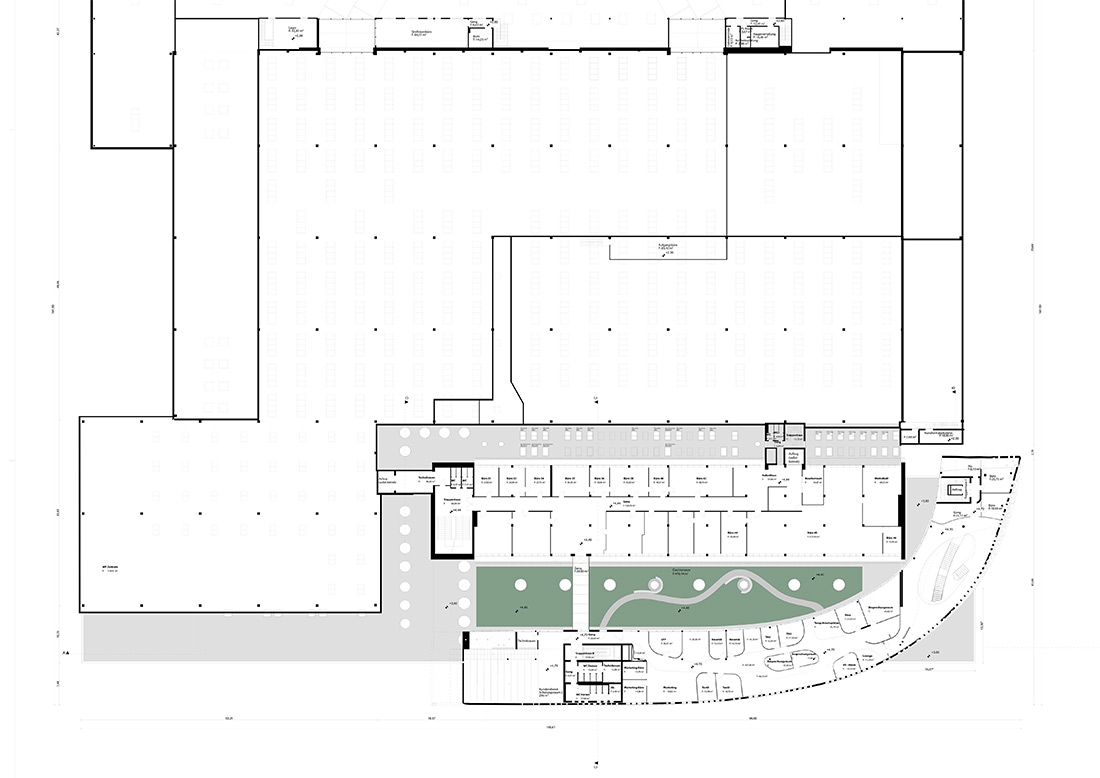