A successful project of a single-family house, designed by 3biro architects (prof. Janez Koželj, Blaž Rupar, Tina Rupar Kobe), was completed in 2011. The total floor-area of the house itself is only 33 m2, however, its total living-space area is spread over 180 m2. It was designed in a unique way, mainly because of its shape which offers a jutting roof for a car on one side as well as a roof over a terrace on the other side of the house. 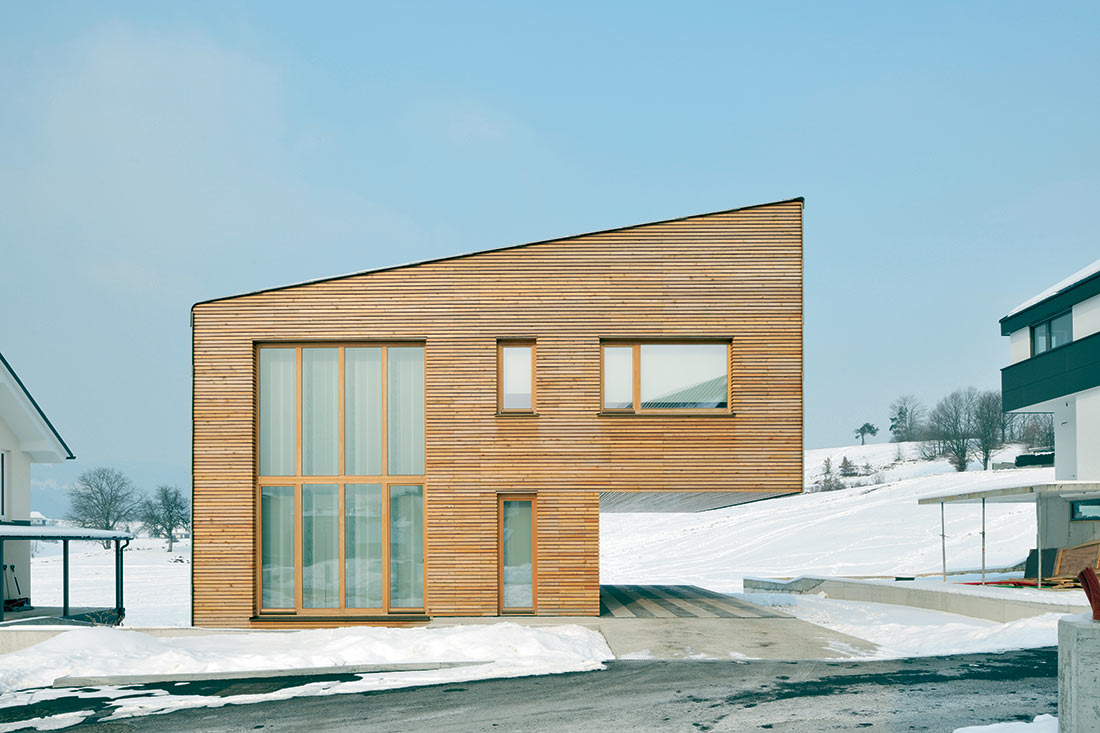 A young couple visits an architect …

The story could not have begun in a more Slovenian way: location – a new Upper-Carniolan suburban Beverly Hills; a client – a young couple with children; an architect – a neighbour. The result?
Anything but Slovenian. 3biro architects understood classical predispositions for a new house in their own way, and they managed to persuade the investor to accept their idea. They considered certain common preferences for an open living space on the ground floor, bedrooms on the upper floor, and a basement with an office. However, what the architect added were two essential places which many houses frequently lack: a jutting roof for a car and for a terrace. Usually they are mostly taken into consideration when the plans have already been completed – and then the roofs of all forms and shapes are expanding, and the faded advertising sunshades are being destroyed by the afternoon storms. 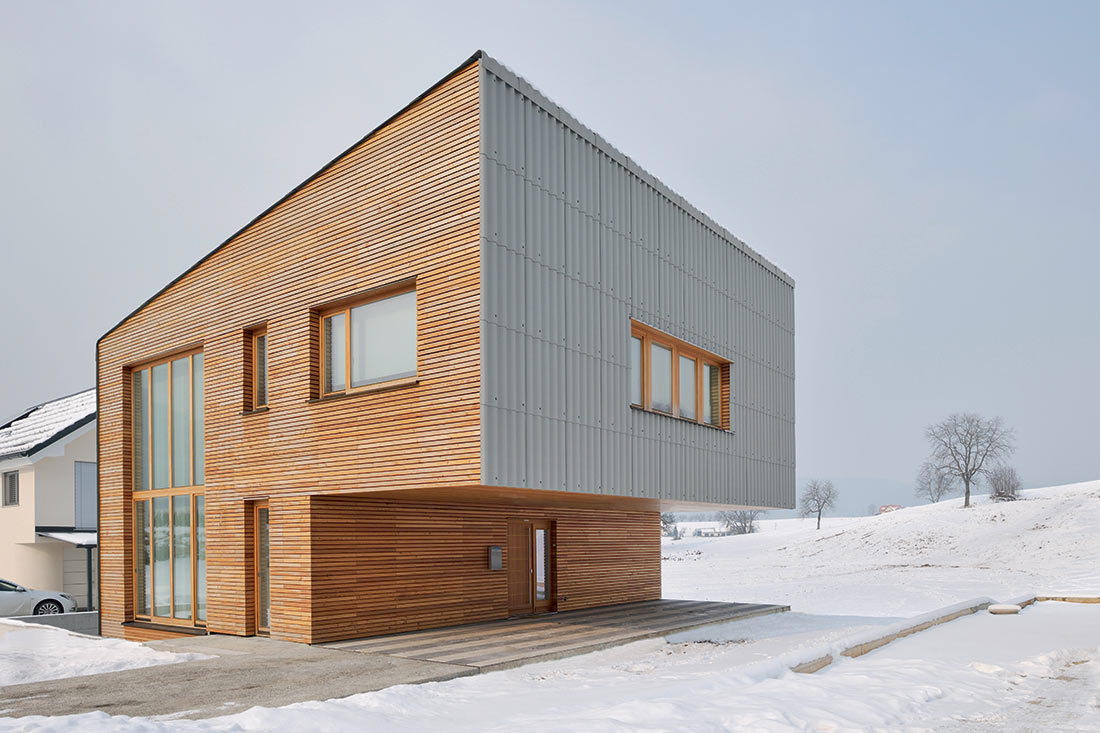 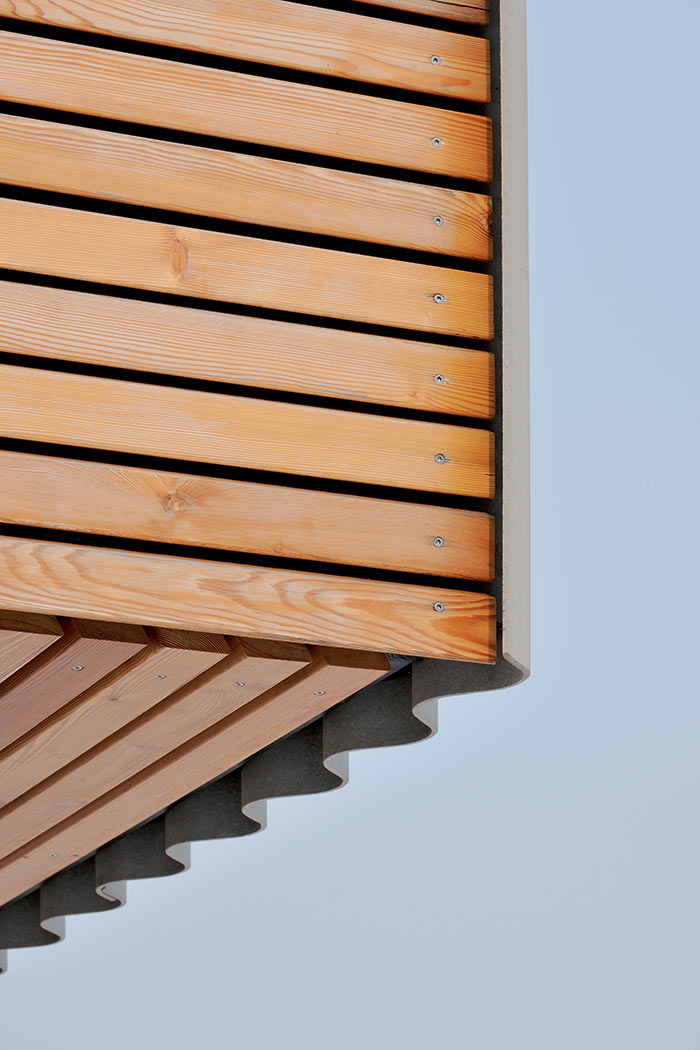 Rant House in the suburbs of Škofja Loka is free from all this clutter. It is located on a slightly sloping land that borders an access road on the south, there are neighbours living on east and west, and on the north there is a nice view over the uninhabited plains. It can be said that the house consists of a three-floor core with a console bedroom floor attached to it on one side, and on the other with a console two-level floor of a living space attached to the core. The eastern console creates eastern parking place underneath, and the western console generates an imposing overhang over a terrace of a basement where the family leisure activities will take place in summer time. 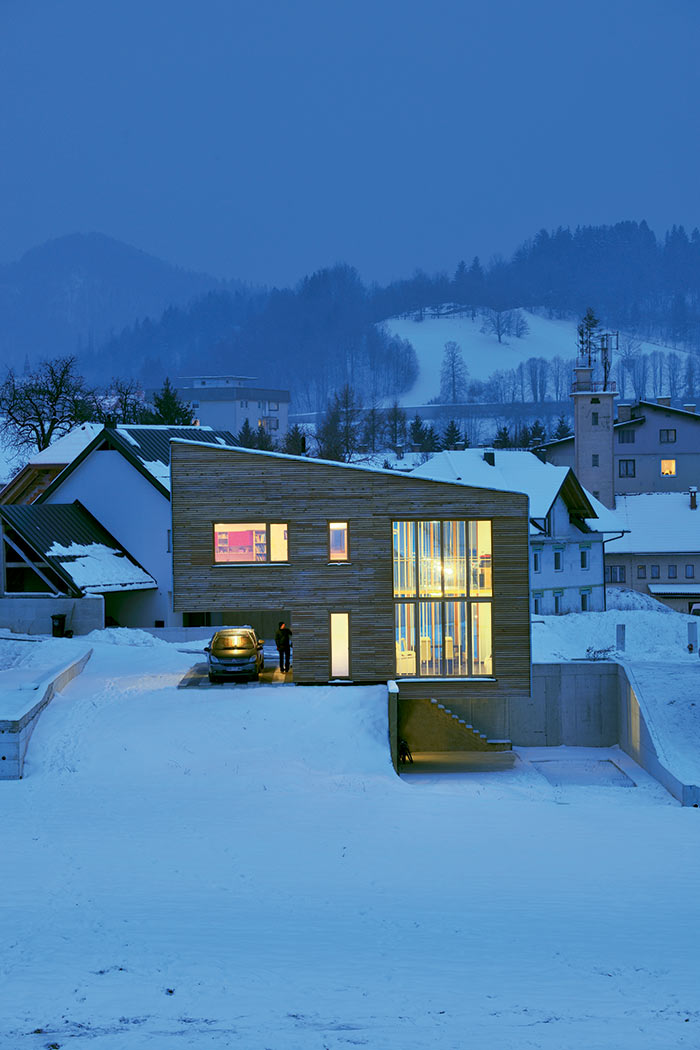 The interior of the house is pervaded by symmetry that equalizes the previously mentioned northern and southern façade. There is a longitudinal entry part on the ground floor with service premises and with a staircase which is separated from the luxurious two-level living space with a kitchen. There are bedrooms with bathrooms on the northern side, and on the western side there is a gallery which is located symmetrically in the middle of the living room. The staircase represents some kind of an axis of the house around which it is possible to circle, and it might be that due to this circularity and the changing positions of the vital places on various floors one can feel the freedom of combinations of the vertical core with the two consoles. 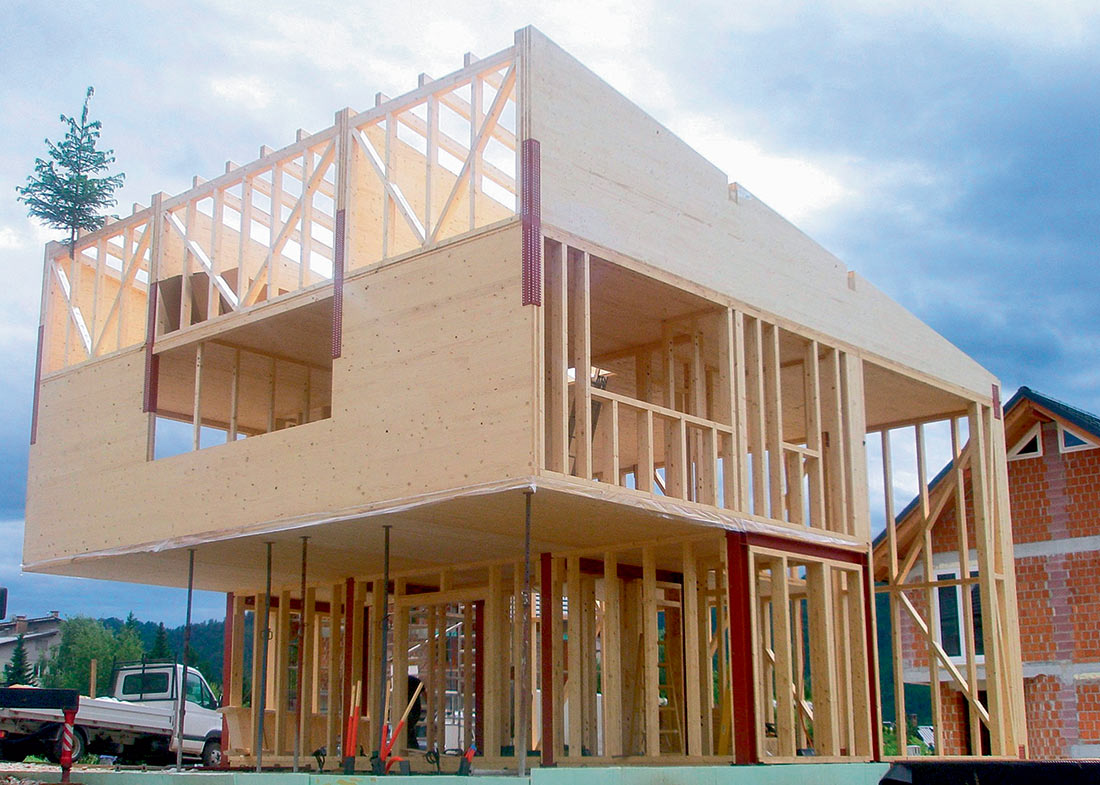 If it was a common house, the description could at this stage be finished, but not in this case. The house, namely, represents a great accomplishment, primarily in the constructional sense. Many of us would probably never think that such a demanding architectural plan and such big overhangs can be carried out by means of a prefabricated wooden construction. There is, namely, this deep-rooted belief that prefabricated houses are only simple houses with small spans and openings. And that is not the case! The Rant House represents a special construction achievement in the area of single-family houses, and such a great accomplishment was rendered possible with a consistent cooperation among the construction contractor, a person in charge of statics, and an architect. And last but by no means least, the client himself who, by accepting this daring plan, added a cherry on the top to all other advantages of prefabricated constructions: short construction period (only a few months!), the ease of living while being aware of the natural materials, and, maybe most importantly, the ecological aspect: the house is also different from the surrounding “Texas” because of its lightness, therefore no explosive would be needed to make its bitter end. And, anyway, who on Earth would wish that such a house would be destroyed? Probably no one. Not even the future generations. 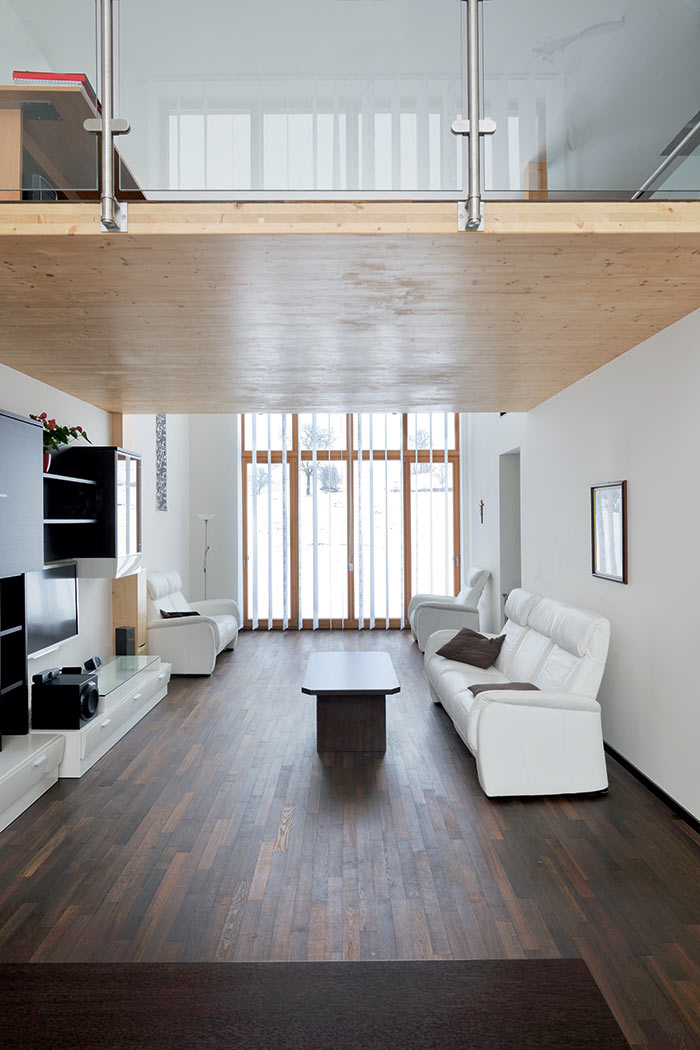 A MINI INTERVIEW WITH THE ARCHITECTS
Why is, in your opinion, this house different from the neighbouring houses?
Because it is more adjusted to the terrain.

Which phase is, in your opinion, the most crucial for the construction of a good house?
The client’s acceptance of the basic idea.

Why did you decide for the prefabricated construction? Is it justifiable also in terms of purely economic aspect?
Because it is more precise, it can be premanufactured in a workshop hall, and because it can be built in winter time as well (which also happened in this case).

Are you satisfied with the house?
It is important that the family who lives in the house is satisfied as well as the neighbours watching the house.

Could you tell us which detail in/ on/ by the house is most heart-warming for you?
A view from the outside over the two-level living room and the entrance. 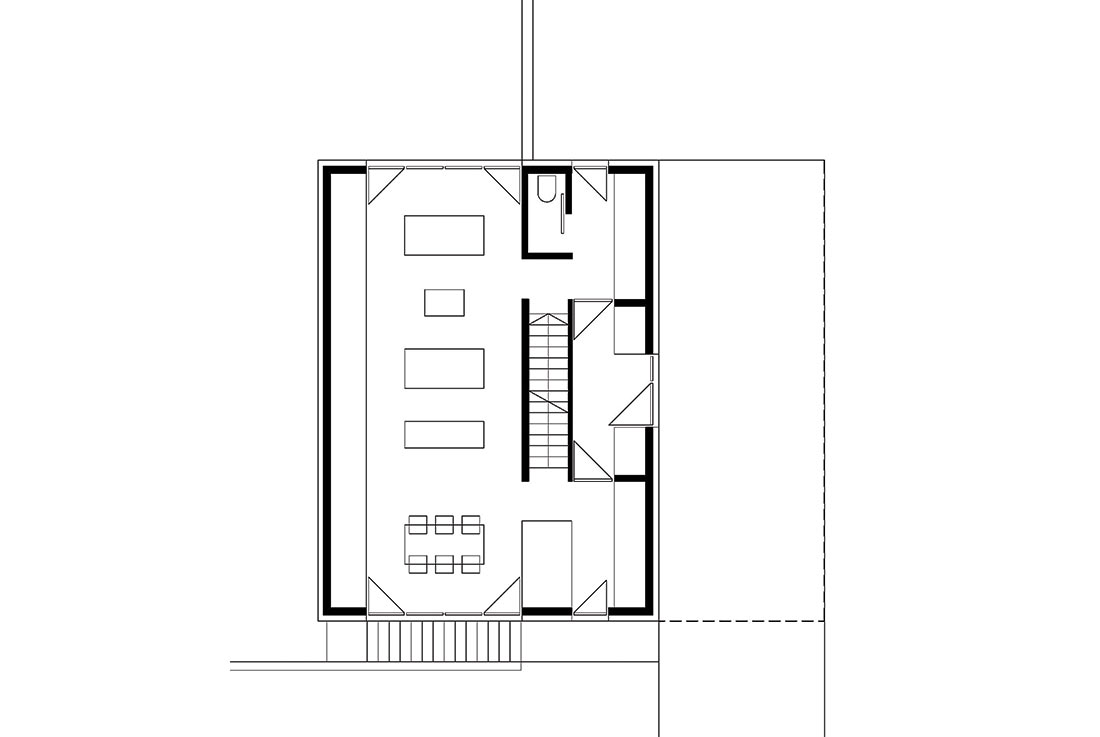 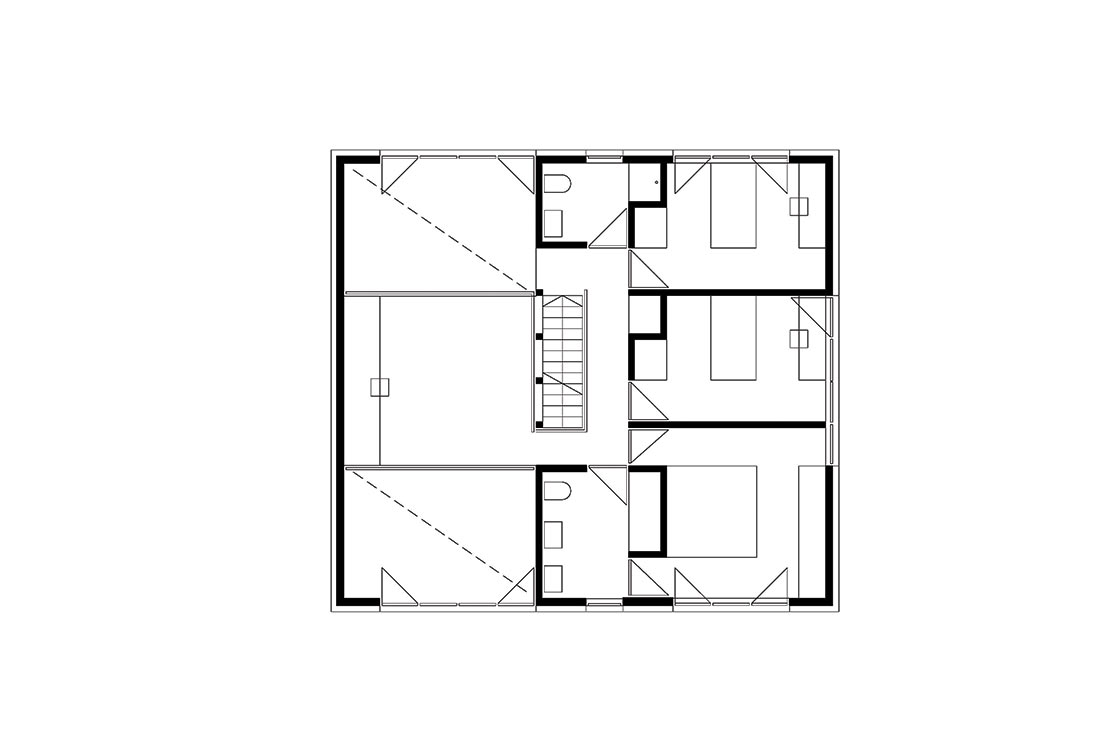 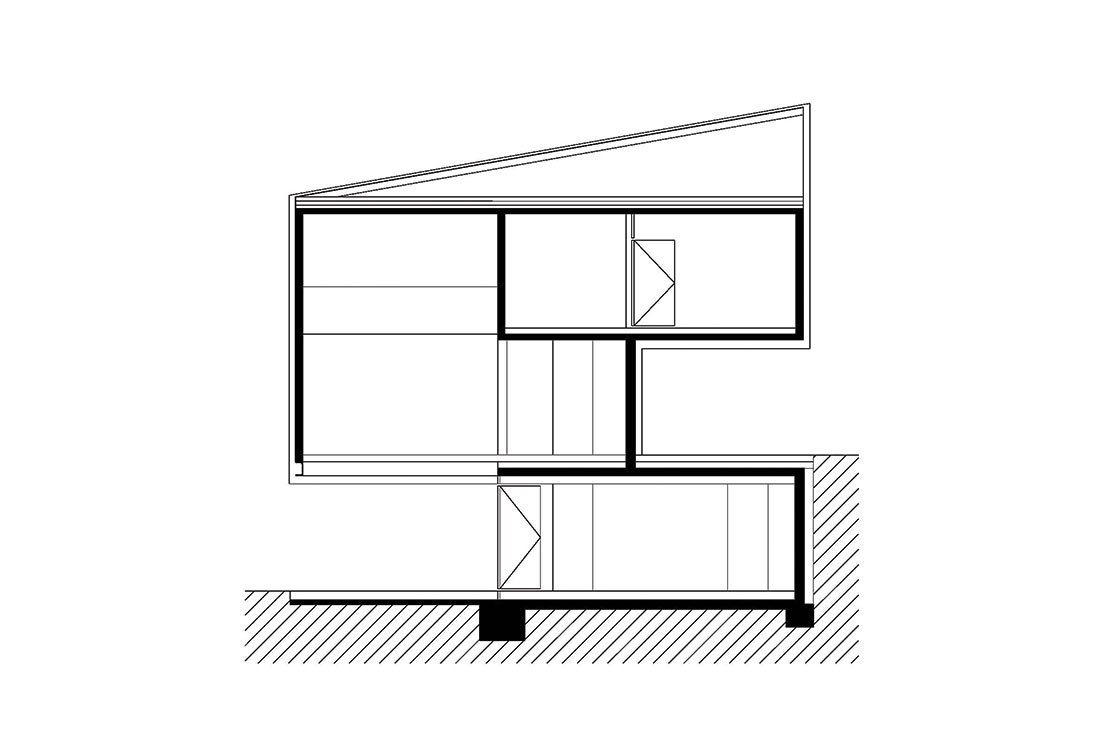