Oloop group consists of Katja Burger, Tjaša Bavcon and Jasmina Ferček. Their activities began in 2003 when, together with Elena Fajt and Jana Mršnik, they established the Institute of modern textile art and design. Their products and project have so far been displayed and presented at numerous exhibitions and participatory events at home and abroad. Besides, they have also been granted various prestigious awards. They are the pioneers of Slovenian social design and they are fully aware of its importance as well as of the significance of the process of co-creation. 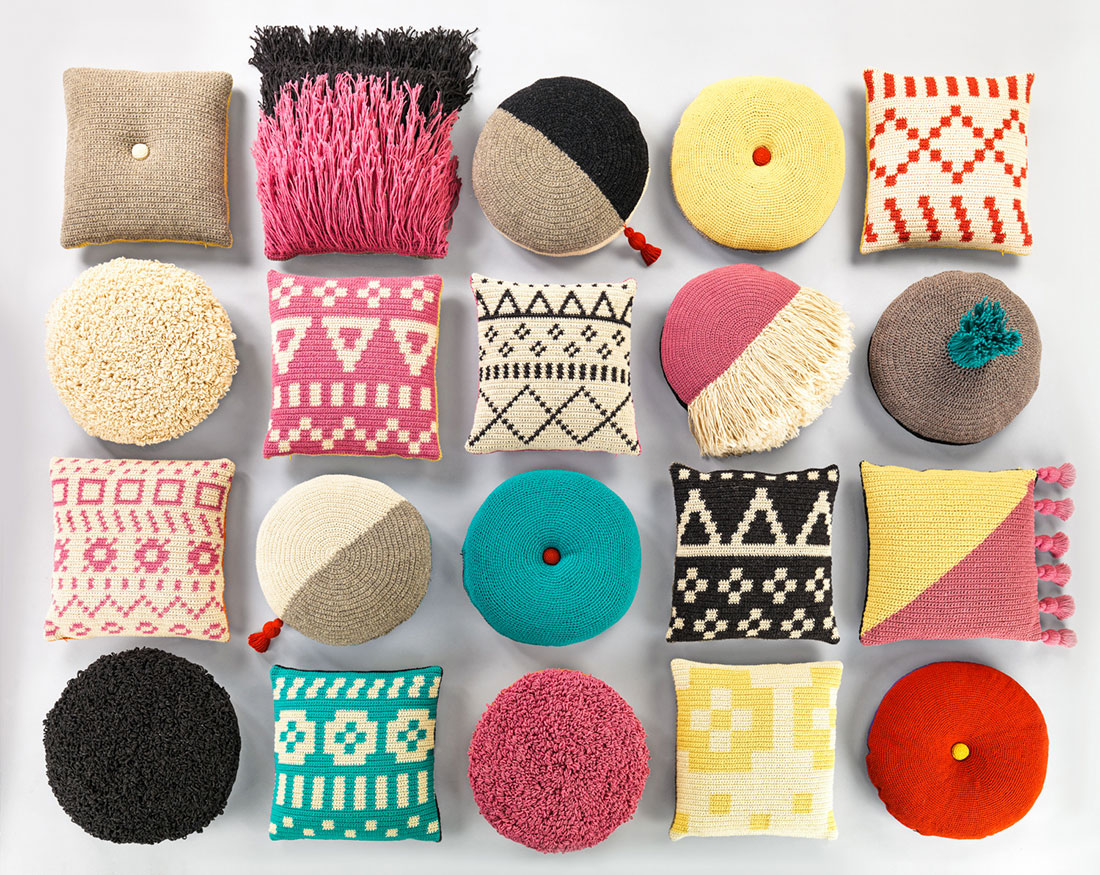 Which of your products and projects is the most successful one? What were your beginnings like?
Tjaša: Our best seller is still a woolen soap bar. The product was developed in 2006. Although it was created more than 10 years ago, it is still very interesting and highly admired. In Slovenia the product can be purchased in the Museum of Architecture and Design (MAO) and IKA shop, otherwise its sales volumes are largest in Italy, Netherlands, and Korea. Our most successful project so far has been Revealed hands, which began in 2011. This project comprised three bigger annual projects with breaks. With our last project, Revealed hands – business and humanity successes, we managed to create a series of home pillows that are sold online (www.razkriteroke.si). The first two projects were more of a research nature since at the beginning we were mostly analysing the group as well as ourselves, and we were learning and developing social interaction skills. During this period we also realised that textile is not just material used for creating product design, but that there is something more to it. Textile evolved into a medium intended for connecting and establishing new contacts with oneself and others.
Jasmina: Everything started with a woolen soap bar. During the process of creation and manufacturing we had a strong wish to create something more, something special, not just a simple product. When the product was developed we wanted it to be produced by a group that would enrich it with their story. And thus we got in touch with the women from a Slovenian town Jesenice – after we gave them some trainings they started making products. We continued to maintain close links with them until a Call for applications was issued by the Ministry of Culture. The content of this tender really perfectly matched our activities, therefore we started working on the project Revealed hands, and the project was carried out with the assistance of the same group of women. 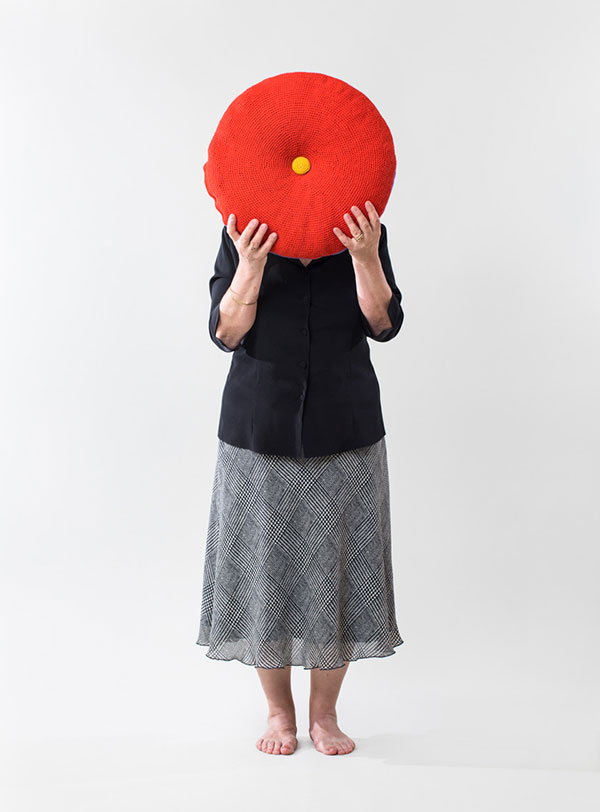 What makes your design special and unique?
Jasmina: Each of our projects is always also a product since there is a lot of social design behind. A project can also be regarded as a whole with all its pertinent processes, and it shall not be seen only as a final product that has been created as a result of a certain process. We should take a look at the bigger picture.
Tjaša: Our project Revealed hands has been awarded Alpine Pluralism Award 2018 in Turin. This is the award given for the best social project that includes immigrants and connects them with social design. Apart from attending the award ceremony, we also participated at the international workshop where we examined the possibilities of cooperation with other participants from the six European countries. Our project triggered a great deal of attention in Italy and Germany where they saw it as a promising trademark. 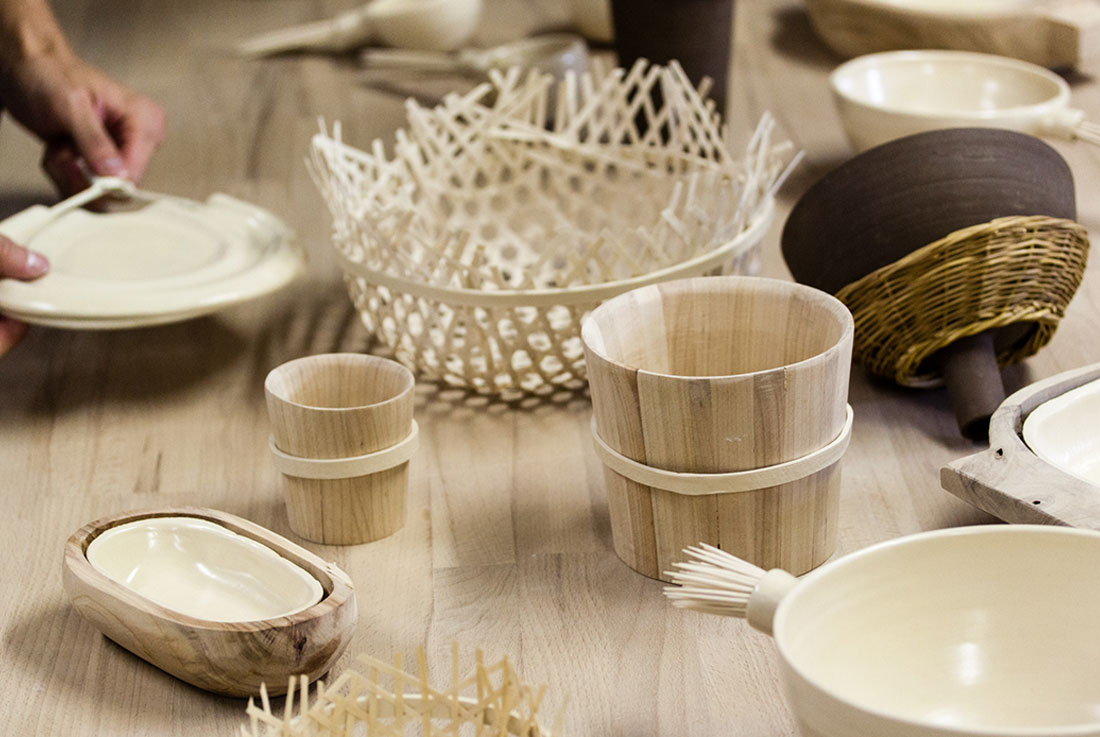 Previously you mentioned social design – how are you, as designers, related to this type of design?
Jasmina: When it comes to social design you are not really a designer in the classical sense of this word since you also need to take on the role of a social worker. Much effort needs to be put into communication and understanding of the group dynamics. There aren’t many designers who would be involved in such activities since this type of design work is rather complex and demanding. The beginnings of this kind of design date back to the 70s, and today it is gaining ground with literature that helps you find your place in society. Maja Vardjan wrote an article about our work entitled Community of Making and Common Ground (the article was published in the catalogue European Design Stories) and in this article she classified our work as social design – she mentioned that we consider the process itself as the essence of our work rather than the final product design. The theoretician Barbara Predan has been keeping track of our work for many years now and she has been writing articles about our work in in various media. We are creators ourselves, therefore it is difficult for us to define our work. The assessment of your work is important because it is easier for you to work on the new projects and you also become more aware of them.
Tjaša: Social design is a type of design that in Slovenia has not risen to prominence yet. However, we have already noticed many of its seeds and ideas. Our project Revealed hands is currently being displayed in Budapest within the framework of a bigger European exhibition Design without Borders. The exhibition features design projects from Central Europe. Our project is different from all the others due to its social topics. We discussed the lack of such themes with the curator of the exhibition and she is determined to include the topic of social design alongside the themes related to architecture, product and textile design. 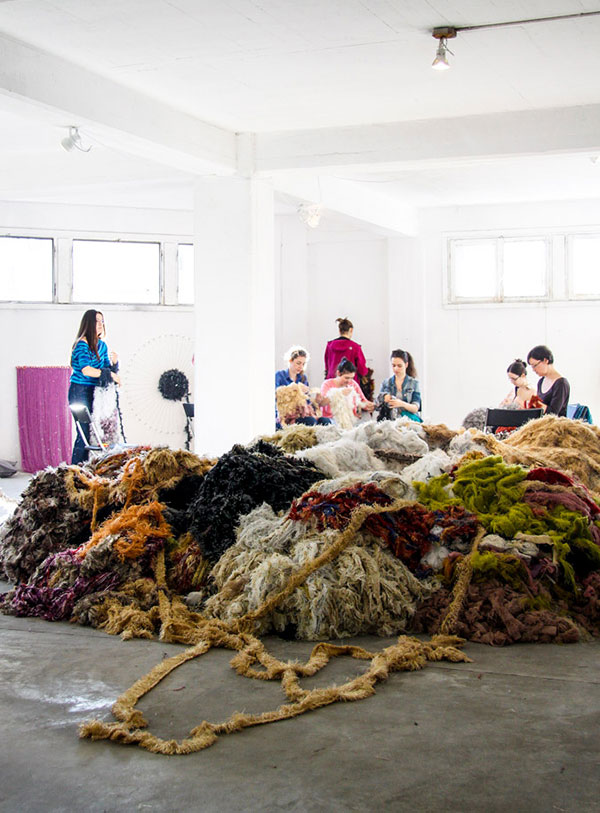 What is your view on the content variety of your events?
Tjaša: We are avid explorers, therefore we get excited about various different themes that may serve as our inspiration – we are interested in life in general, that is why the subject matters at our participatory events are so diverse. Now, when the pathways to foreign countries are opening up, we would like to focus on design topics and explore them in detail. These topics can often be related to areas such as education as well as personal and professional growth.
Jasmina: We would like to see that an identical thing can be transferred to completely new environment with completely different people. Various tenders can force you to create new ideas constantly and they can protect both, you as well as the market. We think we have so far gathered many really good ideas that have also been tested. In the future we would like to extend the project Revealed hands to foreign countries, so that it gets new dimensions and new depths. 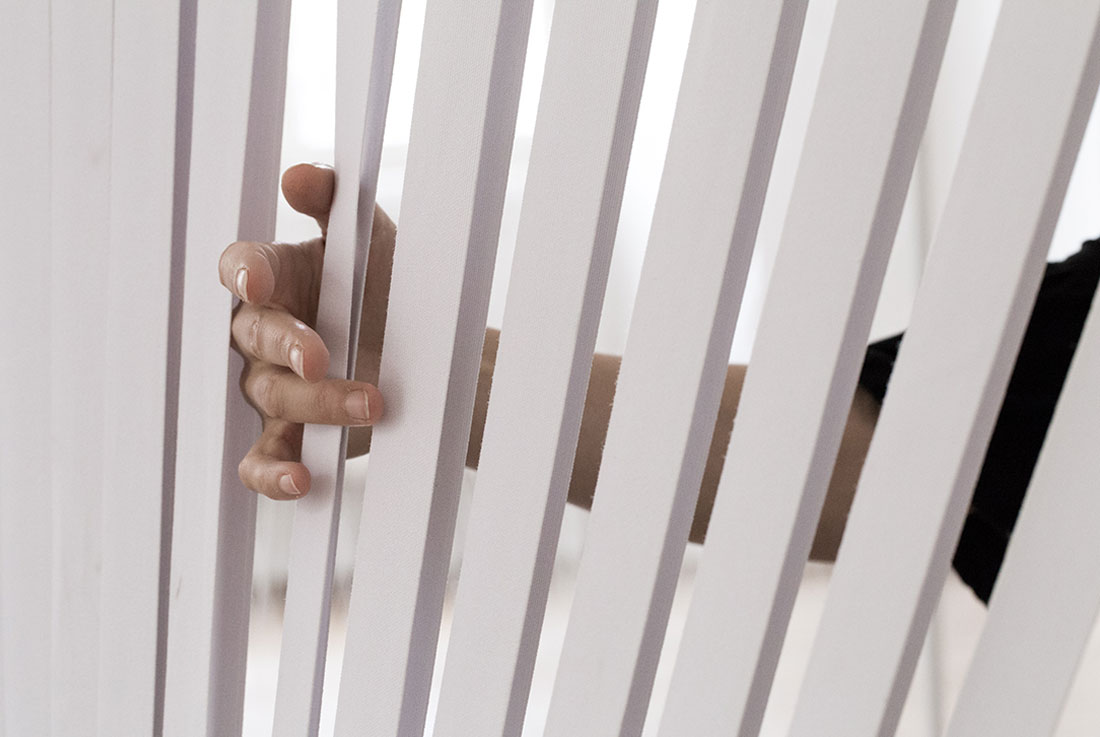 What is the final product of your participatory events?
Jasmina: The final product of our participatory events is a creative process involving the audience and a certain group of people. We always make a record of the process of new events by taking videos or pictures. Both, the results of the process (products) as well as records (photo and video material) are presented at the exhibition. We advertise and sell the creative process which is shown to the general public – people can come to see it and take part in it. The result of the process is a final product or an exhibition. So far we have not dared to create a process without making a final product. However, we wonder if it would be possible to create something non-material – so that the only thing that would exist would be a process itself. We were close to this notion with one of our projects – Hands are watching, eyes are touching (in cooperation with an artist Maria Blaisse) – which was a truly process-based project. This event was based on the idea of searching for and exploring the freedom of the unnamed forms, which slightly confused the visitors since they were expecting a certain standardised workshop. Consequently we still stick to the well proven method of participatory events at the moment, because we feel it is important to make the visitors feel good and to create a positive experience. 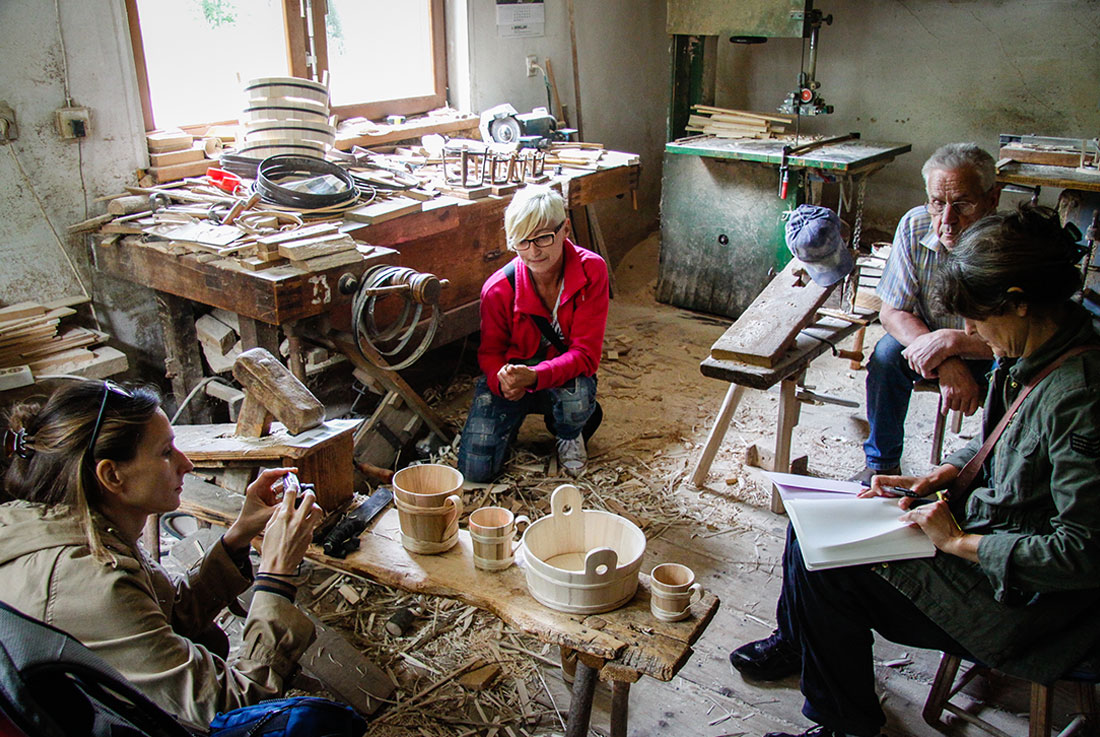 What about your marketing strategies. How successful are you in this area?
Tjaša: We are active as explorers, creators, producers and consequently we often run out of time for marketing activities. Our most successful marketing methods are word-of-mouth marketing, personal contacts and exhibitions. Our links with various institutions such as Museum of Architecture and Design (MAO), International Centre of Graphic Arts (MGLC), Slovene Ethnographic Museum (SEM) are also very important. They helped us a great deal when we were expanding abroad, primarily the Museum of Architecture and Design which has many times incorporated our work into Slovenian works that where enlisted on a curatorial proposal submitted to the curators of the exhibitions abroad. We are well aware of the huge importance of social media networks, therefore we are trying to be active in this field as well.

What are your plans for the future?
Tjaša: At the moment we would like to extend the project Revealed hands and other Oloop projects abroad. We have just submitted a new tender application based on the theme of connecting immigrants living in Jesenice with the asylum seekers accommodated at the Reception centre in Ljubljana. We would like to intertwine the story of Revealed hands with the newly established needs that have proven to be relevant at the moment. In October a participatory project Between inside and outside (Med znotraj in zunaj) is expected to be carried out in cooperation with the American Artist Liz Collins. This project will mark the 15th anniversary of our activities.